February 8 2016
14
“Now go and smite Amalik (and Yerima) and consume all that he has (take not yourselves anything from them, but destroy and cast the curse on all that he has); And do not give him any mercy, but bring death from husband to wife, from child to infant, from ox to sheep, from camel to ass. ”
(The first book of Kingdoms 15: 3).

Everything has its beginning and end, the Bible says, and if the battle of Nesbi or Neysbi (as the British call it) decided the outcome of the war between parliament and the king that began in 1642, then the battle of Marston-Moor 2 July 1644 was the first victory, won by the army of parliament during this war. The marshland called Marston-Moore and located 11 km west of York was the scene of the battle. The size of the parliamentary army was 27 000 people (including the Scots allies), but in the army of Prince Rupert, sent by King Charles I to assist the besieged city of York, only 17 000. 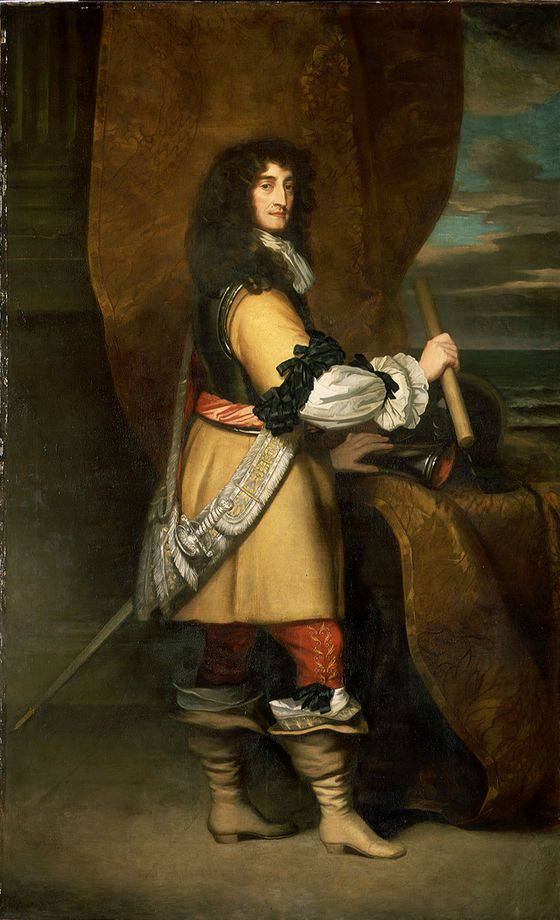 Prince Rupert was an intelligent and experienced commander. Therefore, arriving on July 1 in York, he, with a deft maneuver, forced the parliamentary forces to move away from the city and thus remove the siege from it. The Cavendish soldiers immediately joined his forces, after which he began the movement towards Marston-Mur, to which the parliamentary forces had withdrawn. 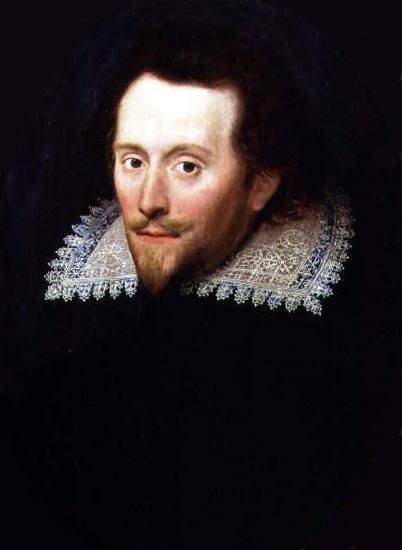 It is believed that this was the name of the first cavalry regiment, formed by Cromwell in the 1642 year and distinguished by discipline that was not characteristic of the army of that time. According to another version, Cromwell himself was called “Old Iron-sided”, and this is his nickname and “stuck” to his soldiers. In theory, Rupert should not have attacked an army one and a half times superior to his own troops, but he believed that since the main strike force of the army was cavalry at that time, the overall numerical superiority of the army of parliament was not so significant. 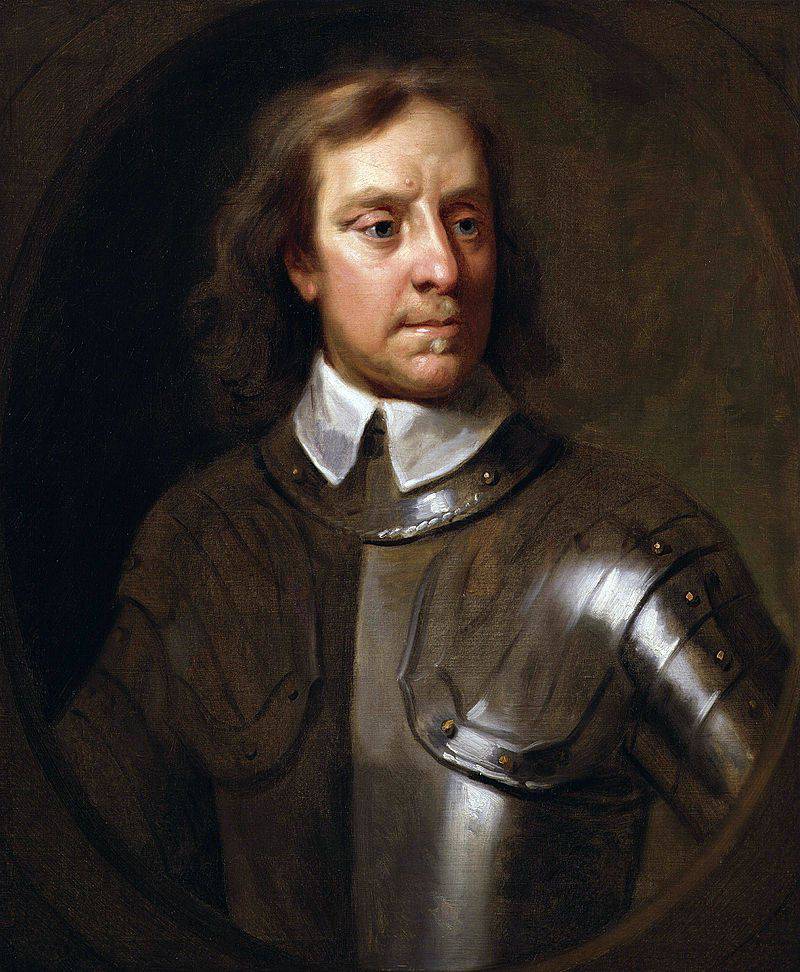 The English nobility from childhood learned to ride and prepared for service in cavalry. That is why at the very beginning the king had an advantage to the cavalry, and Cromwell had to train his cavalry from the beginning. Therefore, it is not surprising that in a number of previous clashes, the horsemen of Prince Rupert even defeated parliamentary generals, who outnumbered him in the number of their troops. 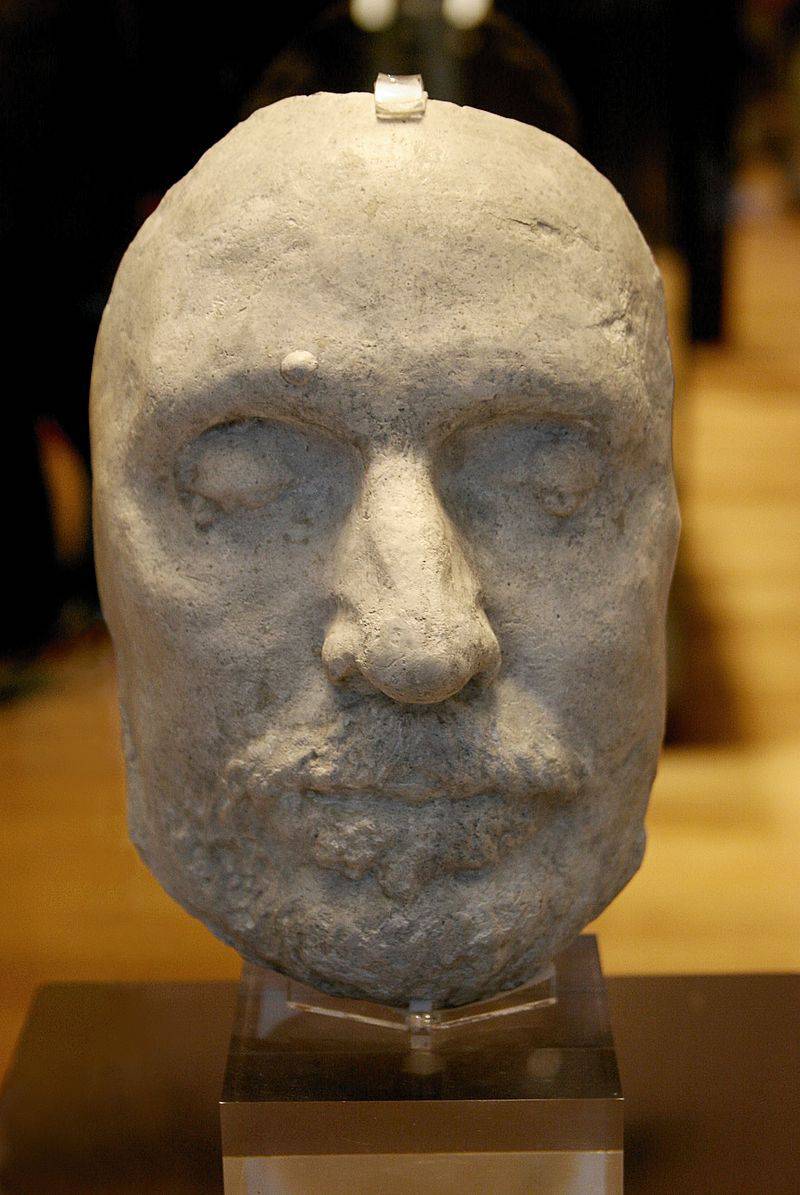 At the same time, in the battle at Grentem, and later at Gainsborough, and at Winsby, the Cromwell horsemen remained behind the battlefield, although Rupert for some reason did not pay attention to this and, apparently, attributed these failures to chance. In addition, Cromwell was confident that the pikemen of the army of the parliament, acting with their five-meter peaks in one line, would repel any “gentlemen” primarily because of their numbers.

Cromwell noticed that Rupert's cavalry had poor discipline and, attacking, every cavalier rider, like a knight before, attacked his chosen target, regardless of the actions of everyone else. Therefore, he taught his riders not to crumble when attacking, but to stand firmly together. Already contemporaries of those events paid attention to the high combat qualities of the “iron-sided”. In particular, the historian Clarendon wrote about them: “The royal troops after the attack are never built again and are not able to attack on the same day, while the Cromwell soldiers, regardless of whether they won or were beaten and pursued, immediately take on combat order pending new orders. " That is, the advantage of the "iron-sided" was not in their courage, strength and courage of each individual soldier, but in the fact that they acted on the battlefield as one, obeyed the orders of their superior and ... did not try to somehow stand out with their personal bravery among others . 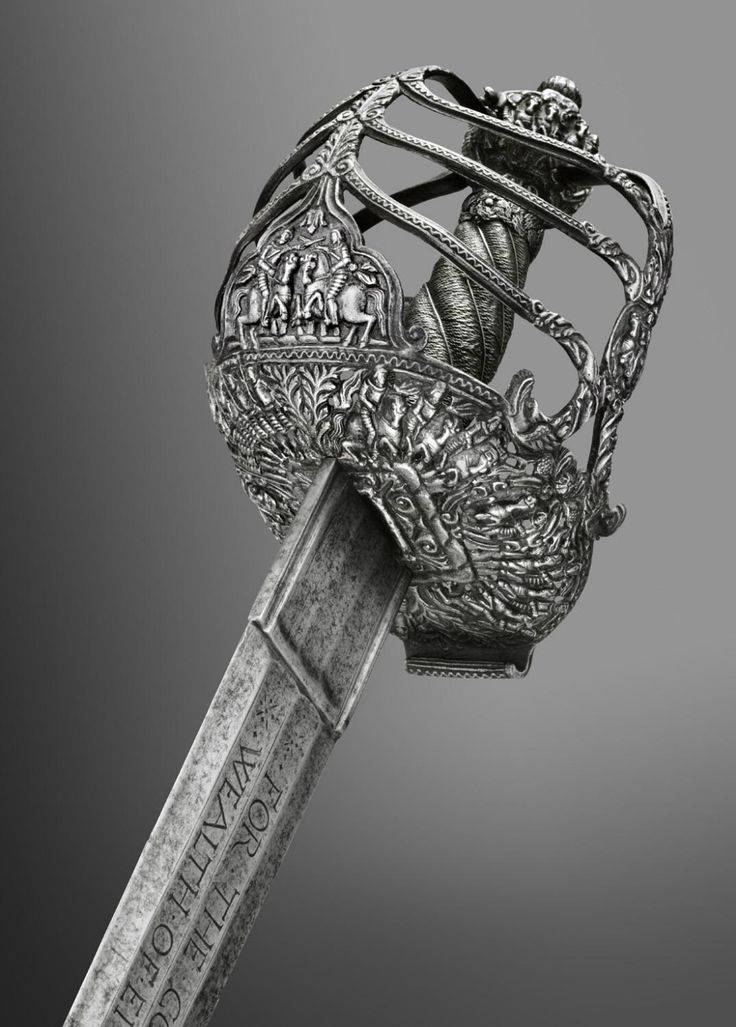 “Basket sword” by Oliver Cromwell near 1650, the Philadelphia Museum of Art.

During the battle of Marston-Moore, the power of the parliament consisted, in fact, of three armies at once with a separate command: the army of Lord Fairfax, the army of the Eastern Association and the Scots, commanded by Lord Liven. It was dangerous, because any differences between the commanders could lead to big problems in the management of troops in general. But ... Cromwell turned to God and he apparently suggested that he rely on the common sense and experience of his comrades armsbecause he still didn’t seek unity in the face of the enemy of unity of command. Although, of course, understood his favor.

The combat orders of combatants can be described as primitive to the extreme: in the center of the infantry, on the flanks of the cavalry, along the front artillery, whose guns were between parts of pikemen and musketeers. 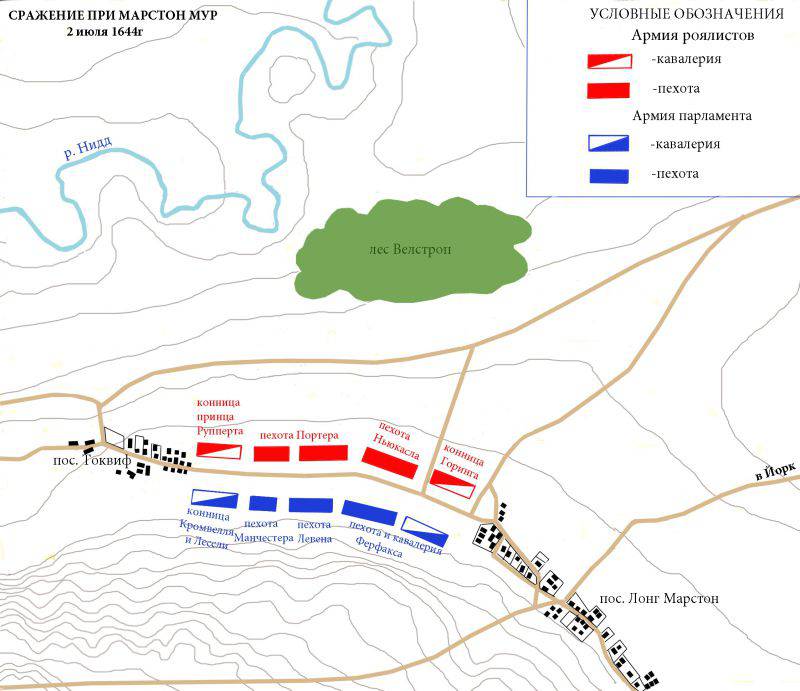 The position was extended between two settlements - Long Marston and the village of Tokwif and stretched along the road that connected them. A ditch stretched along it, which was a natural obstacle for cavalry, although not too significant, since the whole was overgrown with grass. The left flank of the royal army was commanded by Lord Goring, opposed to him by Lord Fairfax, and on the opposite flank against the cavalry of Prince Rupert were the "iron-sided" Cromwell, who also had a reserve of Scottish cavalrymen under the command of Leslie. In the center were the infantry of Count Manchester and Leuven, opposite whom stood the royal infantry of Porter and Newcastle. 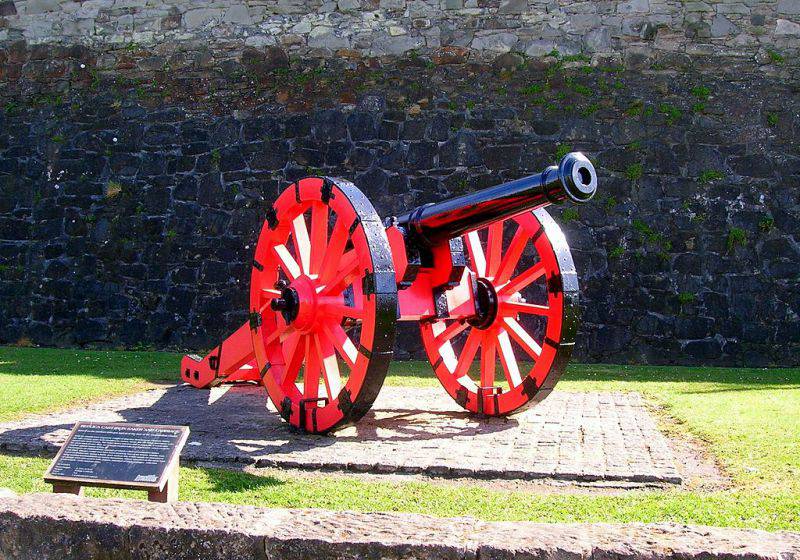 The gun of the civil war. South Aurshire, Scotland.

They were preparing for the battle all day, but the weather prevented him from starting: it began to rain several times, and it was impossible to shoot muskets and pistols in the rain. Only around 5 hours of the evening did an artillery duel begin. But even then, many believed that the battle would not take place, since it was going towards evening and many were afraid that the weather would deteriorate even more. Rupert's cavalrymen generally sat down for lunch, although the horses did not unsaddle.

The use of the cuirass, helmet, and narucha on the left hand led to the fact that the riders who fought with cold weapons, it became very difficult to hit each other. But on the other hand, the vulnerability of the right hand, which had a heavy equestrian rapier, increased. Gardy baskets were invented, which completely protected the entire brush. In addition, in close cavalry combat, such a guard could deliver a stunning blow to the face.

And here in the hours of 7, the singing of the psalm from the First Book of Kings, as was customary in them, Cromwell's horsemen unexpectedly forced a ditch and jumped on the enemy. The avalanche of horsemen in yellow leather buffs made of buffalo, with plain linen collars, metal pot-shaped lobster helmets and breastplate glistening in the sun, looked simple but impressive. Cavalry cavalry also in armor, lace collars and "musketeer" hats with colorful feathers and with a metal casket jumped in towards them. Zheleznoboki launched a volley at them and killed many, but for this they had to slow down, so Cromwell could not immediately break through the enemy front.

Prince Rupert considered that the decisive moment had come and for the second time ordered to blow the attack. Two masses of riders clashed in a tight fight in which everything was mixed up. Cromwell, who fought in the front row, was wounded in the neck and was forced to leave the battlefield to bandage. At this critical moment Leslie's cavalry attacked Rupert's horsemen from the flank. Meanwhile, Cromwell returned to the battlefield and ordered the squadrons to make volts and reorganize, and again moved them to attack the enemy. For the “gentlemen” who scattered all over the field, it was simply impossible to repel the blow. It became obvious that the “round-headed” achieved success here, and that Rupert's cavalry was completely crushed. 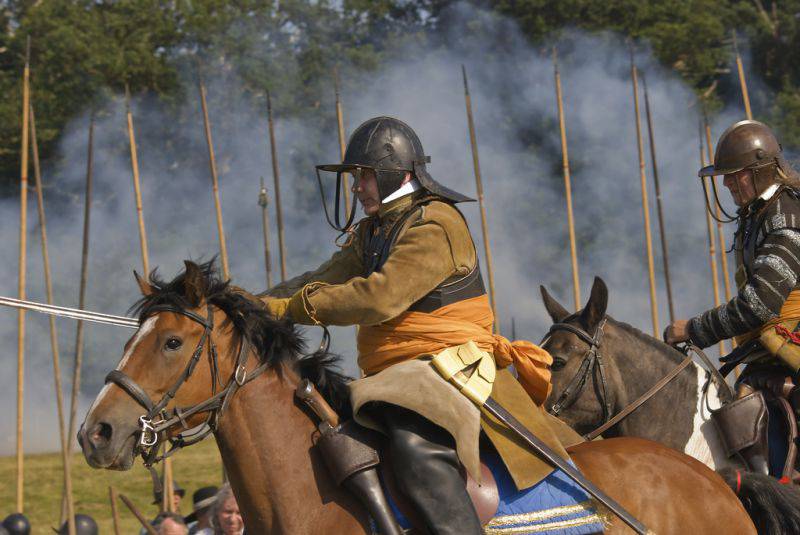 Meanwhile, in the center of the parliamentary infantry, attacking the enemy, met with decisive resistance, and was rejected in places, and continued to fight in places, being in a very disadvantageous position, as its united front was torn as a result. On the right flank, Goring's men managed to break through the ranks of Ferfax’s parliamentary forces, cut him off from the main forces and began to threaten the flank of parliamentary infantry. Manchester and Leuven position seemed so serious that they ... left the battlefield, considering that the battle is already lost! 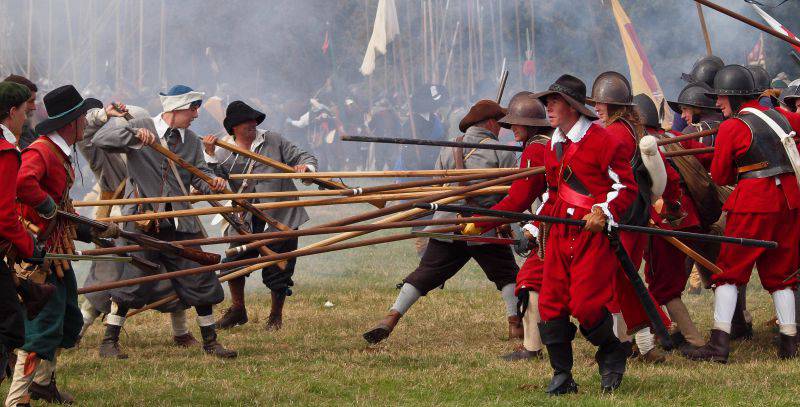 And this is how it happened in reality. Modern reconstruction.

The situation was saved by the determination and military talent of Cromwell, who, having received a message about the difficult situation on the right flank, again gathered his cavalry and again rushed into a repeated attack on Rupert's horsemen, in order to finish them off completely. He managed to break through their ranks - or rather what was left of them, and turned the enemy to flight. Then, having finished smashing him on his plot, he sent Leslie the Scots to pursue Rupert and his horsemen, while he himself repeated the maneuver of Alexander the Great at the battle of Gavgameh, that is, he went around the royal troops from behind, and then attacked Goring's cavalry from the rear. Together with the units of Ferfax, his cavalry was defeated, after which Cromwell attacked the royalist infantry with all his might. And it finally decided the outcome of the battle in favor of the army of parliament. Then began the massacre of the survivors, and still trying to somehow resist the royalists. Later, Cromwell wrote about it in his report to Parliament as follows: "God made them stubble for our swords." About 4000 royalists were killed, 1500 was captured. The army of the parliament was killed and injured to 1500 people. As trophies she also got 14 guns, 6000 muskets, and part of the royal banners. “God was with us and for us!” Said Cromwell. 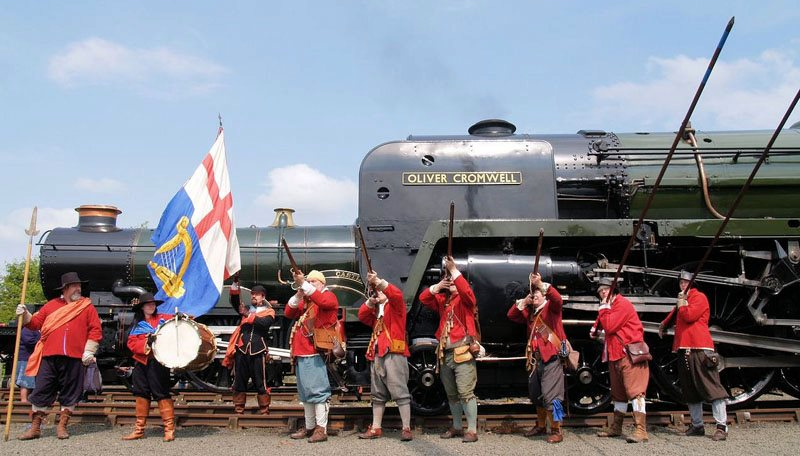 The battle of Marston-Moore was the first truly serious victory for the army of parliament. The previously considered invincible, the royal cavalry of Prince Rupert was utterly defeated by "iron-rammed" Oliver Cromwell. Speaking the language of modernity, we can say that it was a radical change in the course of the civil war in England. 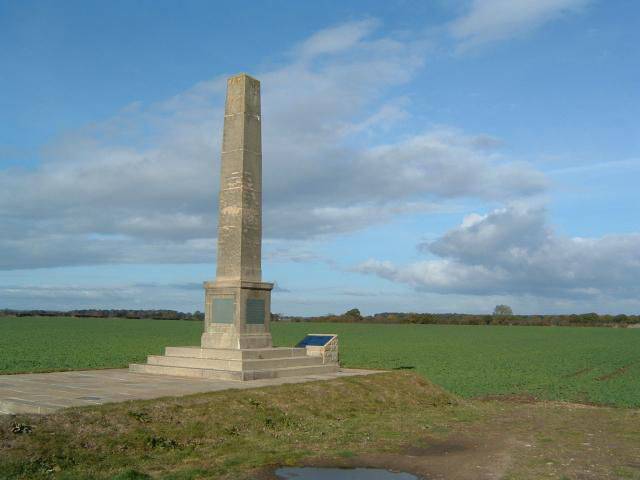 Memorial monument installed at the scene of the battle.

Ctrl Enter
Noticed oshЫbku Highlight text and press. Ctrl + Enter
We are
Cavaliers are defeated. Battle of Marston Moore and NesbyC George on the chest. Cavaliers of the Order of St. George on the fronts of the First World War
14 comments
Information
Dear reader, to leave comments on the publication, you must to register.