February 1 2016
144
Barack Obama has ruled the United States for seven years. Over the years, the US national debt has grown by 8,3 trillion. dollars, reaching an astronomical sum in 18,9 trillion. dollars. At least, it is on this number that the US Treasury abuts. If we translate new record-breaking debt indicators into households, it will turn out: the financial burden of each family has grown by almost 71 thousand dollars. However, among the households that will have to repay debts, the Obama family is also included. But the president will hardly be able to save the country. Previously, experts expressed the view that the United States is waiting for a debt catastrophe in the Greek scenario. 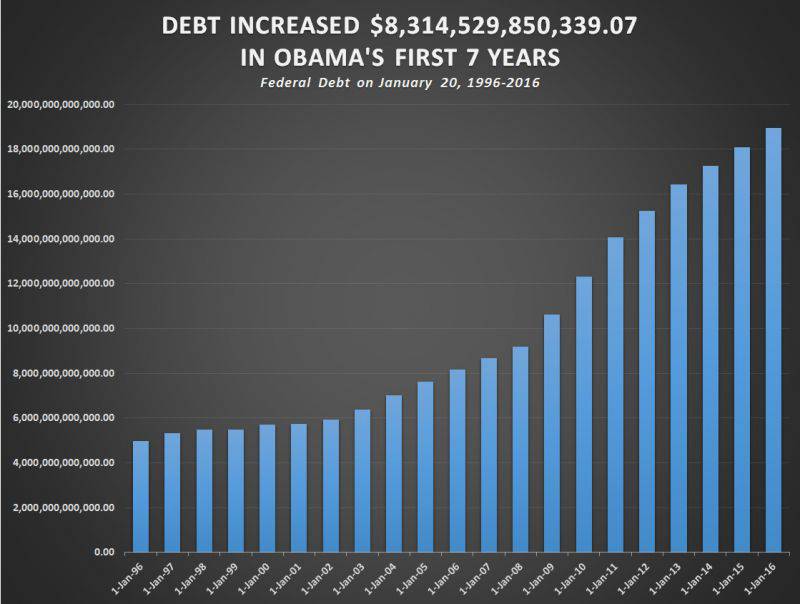 The growth of US government debt from January. 1996 to Jan. 2016 You can clearly see the rapid increase in debt during the years of President Obama. Source: CNS News

Over the seven years of US President Barack Obama’s government debt, the federal government’s debt has increased by $ 8.314.529.850.339,07 (round 8,315 trillion). These are official figures published by the US Treasury, Terence Jeffrey reports.

According to the Census Bureau estimates, as of September 2015, 117,748 million families lived in the United States. During the seven years of the Obama presidency, the “debt” of each household has grown by 70.612 dollars and 91 cents.

For comparison, Terence Jeffrey gave indicators of the debt burden of the reign of Bush Junior.

During his presidency (eight years in office), federal debt increased by 4,899 trillion. dollars Growth of debt for each family amounted to 44.104 dollars and 65 cents. The number of households was equal to 20 in January 2009 of the year (on that day G. Bush transferred his post to B.H. Obama) 111,079 million

Over fifteen years — from the beginning of the first term of George W. Bush to the end of the seventh year of B. H. Obama’s rule — the US federal debt grew by 13,214 trillion. This increase yielded debt growth by 112.219 dollars and 57 cents in terms of each of the 117,748 million households that lived in the country in September 2015.

And some more useful statistics.

As of January 20 2016, when Obama completed his seventh year at the White House, the US federal debt amounted to 18,941 trillion. Doll.

What is the US government doing in this situation?

The same as before: increases the "ceiling" of public debt. With a pen of a pen.

Last November "Lenta.ru" With reference to Reuters, it announced the signing of B.H. Obama’s budget plan for the next two years. In particular, the new plan allows you to increase the borrowing limit. According to the document, the US authorities should return to the March of 2017 to discuss the issue of the “credit limit”.

As for the signed plan, it allows Washington to continue increasing its public debt.

Within one and a half years, the publication indicates, the credit ceiling will rise automatically - “as necessary”.

"Reuters" notes that without the adoption of this document there was a threat of "default".

An American politician, former Republican Senator Ron Paul, who had run for president three times, warned about the "default" earlier.

Last year, in his column published on the website of the Institute for Peace and Prosperity, he wrote that Washington could face an economic crisis if the government does not learn from stories with the Greek debt crisis. Interestingly, the politician sees the reasons for the catastrophic increase in public debt in the wars that America is leading all over the world.

"America will never put its financial affairs in order until we give up our foreign policy and stop spending trillions on unnecessary and unconstitutional wars," Ron Paul quotes. "Lenta.ru".

Ron Paul identified other exorbitant wastes. In his opinion, the United States suffers from excessive social security and corporate benefits.

In addition, the dollar is challenged. And he may even lose the status of the global key currency: “China and Russia are ready to abandon the dollar in international settlements. Many countries will challenge our currency - it is only a matter of time. ” The politician believes that if this happens, a catastrophe similar to the Greek one can become inevitable in the USA.

However, financiers will hardly agree with the hypothesis of Paul.

Earlier, financial expert Andrei Movchan explained in the journal "Forbes"why the debt collapse, which the United States has been predicting for years, will never come.

The theory of "harmfulness" of large foreign and public debt has no evidence, the expert believes. “The inverse relationship between GDP growth rates and the size of public debt does not mean that large debt depressively affects GDP,” he writes. - History knows a lot of examples of rapid economic growth of countries with high levels of debt, including post-war America; over the past 150, more than half of the time, Great Britain has had a national debt above 100% of GDP. ”

The financier quotes the words of Nobel laureate Paul Krugman, who recalled: the state is not a household. The states do not return debts, but amortize them as the gross domestic product grows and inflation increases, cumulatively leading to an increase in tax revenues to the treasury.

B. H. Obama, add to this, hardly thinks that the country "easily copes with the growth of debt." Of course, he signs budget plans, raises the “ceiling” of public debt, but does not forget about reducing the costs that Ron Paul rightly pointed out (see above).

In particular, US military spending, under the new bill, will decrease to 580 billion dollars in the 2017 st fiscal year. For comparison: the US military budget for the 2016-th fiscal year was 612 billion.

In addition, the growth of public debt is not only financial, but also political: the huge and growing numbers are voiced by Obama’s opponents from the Republican Party, “forgetting” that George W. Bush launched two protracted wars in Iraq and Afghanistan.

Observed and commented on Oleg Chuvakin
- especially for topwar.ru
Ctrl Enter
Noticed oshЫbku Highlight text and press. Ctrl + Enter
We are
Print less and give out more (Foreign Affairs, USA)Results of the week. “You are already indebted to the sea: neither the bottom nor the coast”
144 comments
Information
Dear reader, to leave comments on the publication, you must to register.