About the warriors of Rome ... in one material

February 3 2016
162
Neither the brilliance of our clothes, nor the abundance of gold, silver or precious stones can make enemies respect or love us, but only the fear of our weapons makes them obey us.
Inventiveness will do anything if it is not denied relevant expenses.

After the publication of a series of materials about weapons and armor of Celtic warriors, according to the logic of things, Rome should go. But writing about Roman armor and weapons is, in general, a thankless task, because whoever did not write about this and, judging by the same comments of visitors to the BO, they are not bad at all about this. 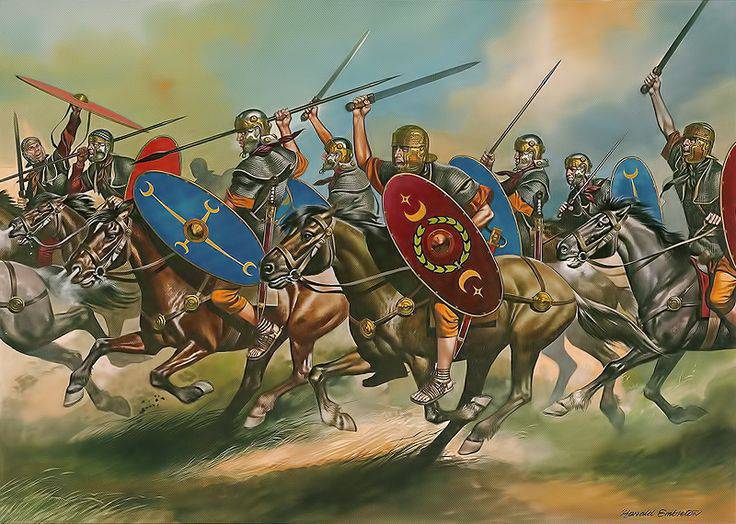 Therefore, the thought was born: first, to tell about the armor and weapons of Rome, again exclusively in the historiographic context, and secondly, to show it all through the work of famous English artists, museum exhibits. That is, the most clearly and concisely - in one material.

First of all, we emphasize that the warriors of Rome at different times had different weapons. In the early “heroic era,” it differed little from Celtic, Samnite, Etruscan, and Greek, since the Romans themselves at that time were “outlaws” - “outlaw people”, outcasts, thieves and murderers. Rome was a gathering of criminals, a "thieves obshchak", hence the whole Roman discipline, and "Roman law." At that time, the Romans had no culture and could not have it by definition. Therefore, they all borrowed everything from everyone, and even called chain mail “the Gallic shirt,” as indicated by such an English historian as R. Robinson [1].

Then there was the era of the Republic, then the Empire, then the empire split and collapsed. At each of historical pieces of this dramatic story of armor and weapons were quite different! 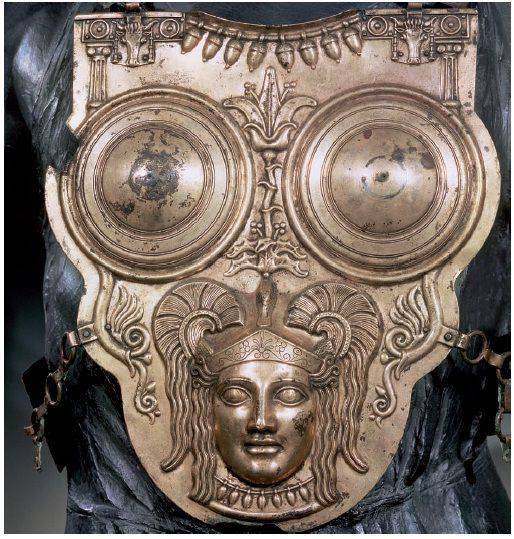 Three-disc Samnite shell from the tomb in Xsur-es-Sad, in Tunisia. Now located in the Museum of the City of Bardo, Tunisia. 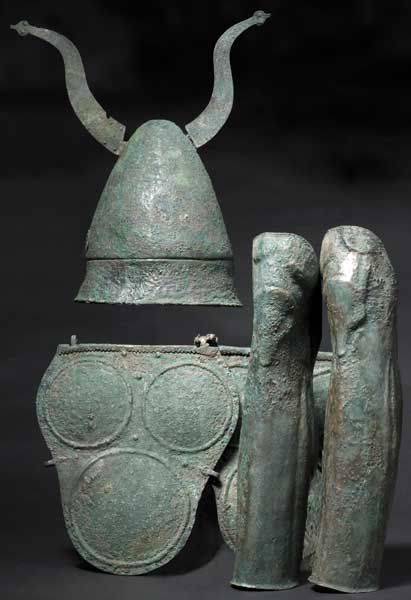 In the era of the Republic, various armor was used, ranging from a square plate on the chest to chain mail, as well as plate armor. It is noted that some of the plates of the Roman shells were surprisingly very small in size: 1 cm long and 0,7 cm wide, although in general they ranged from 1 to 5 cm, which indicates the very high skill of their manufacturers [2]. The presence of the enemies of Rome - Dacians, shells of leaf-like scales made of iron, notes Peter Wilcox [3]. 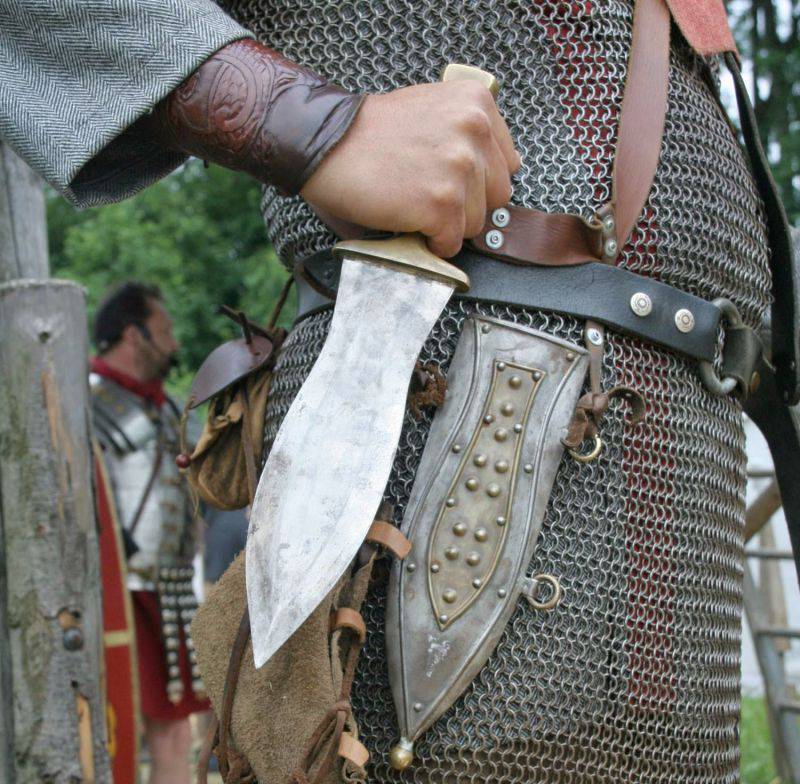 R. Robinson repeatedly notes that in the Roman army chainmail, called “Lorica hamata” (although the term “Lorica” itself comes from the word “skin”), has become very widespread. Other British researchers cite numerous descriptions of ancient Roman armor made of several types of rings: one-piece, stamped, overlapped or end-to-end, and they note that in the era of the empire such rings were replaced by much stronger riveters. 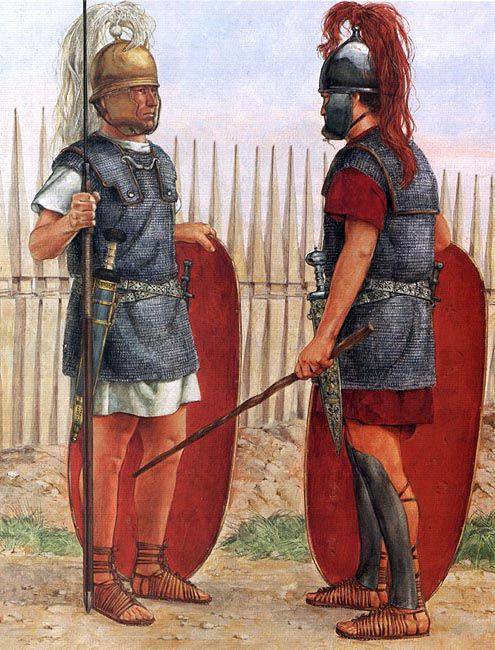 There were even experts who calculated the labor costs of working time needed to put them on a whole legion. In particular, such a study was conducted by Michael Thomas, who, on the basis of experimental data, concluded that it would take 6 of the year to manufacture only one chain of welded and riveted rings with a diameter of 1,3 mm. Thus, 6000 29 000 man-hours of working time were required for a whole legion of 000 people (I century AD). Kolchugi legionery until the 1st century AD were very heavy and weighed 12-15 kg, which is why, perhaps, they were later abandoned [4].

The equestrian chain mail, like that of the Celts, had an armor similar to a pelerine, and weighed sixteen pounds. Mantle was attached to the chest by the rider with the help of two S-shaped hooks, and, apparently, was a separate piece in this type of armor. At the hips, the chain mail of the horsemen had cuts to make it easier to ride. 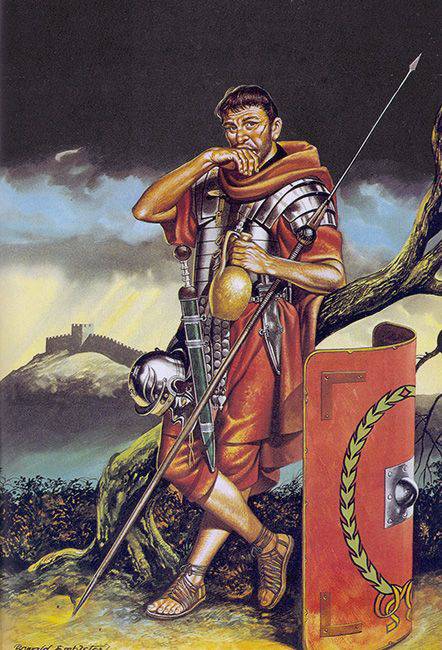 At the same time, on the column of Emperor Trajan, horsemen are depicted and in simpler chain mail with teeth on the shoulders and along the hem. It is noted that such a chain mail weighed about 9 kg. At the same time, they were worn not only by horsemen, but also by Roman archers of the era of the Trajan campaign in Dacia, who had ankle-length tunics, oriental spherical conical helmets and chain mail with scalloped sleeves and hem [5]. 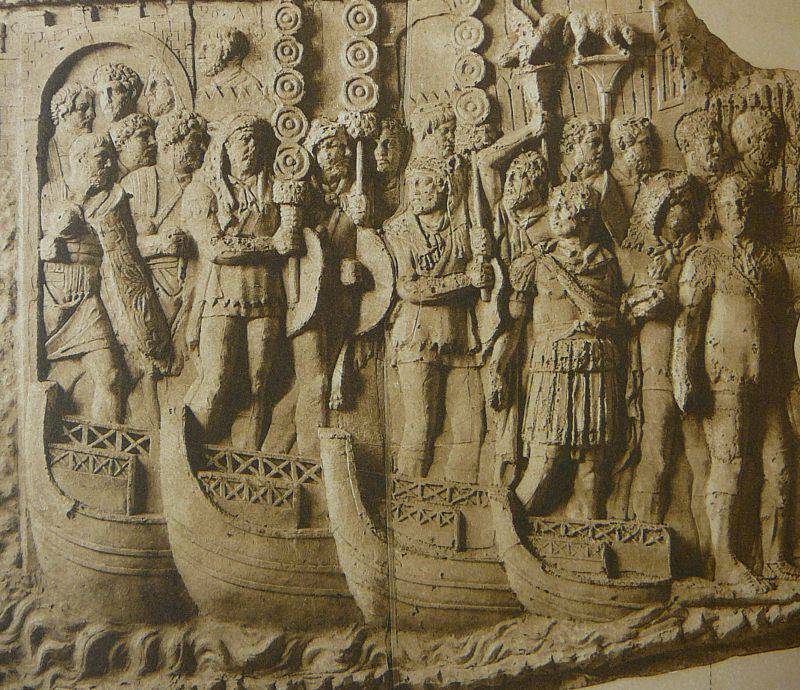 Relief from the column of Trajan: Roman infantrymen in scalloped chain mail.

Helmets also used various. First of all, it is a Montefortinsky type helmet, which also had naschechnikas, which were hung on hinges to it, and later replaced it with a helmet of Italian type. Later helmets of legionaries with developed naschelniki and nazatylnik (the so-called "Galsky" or imperial type of helmet) eventually replaced the helmet of a conical shape - spgelhelm (of four segments attached to the frame). 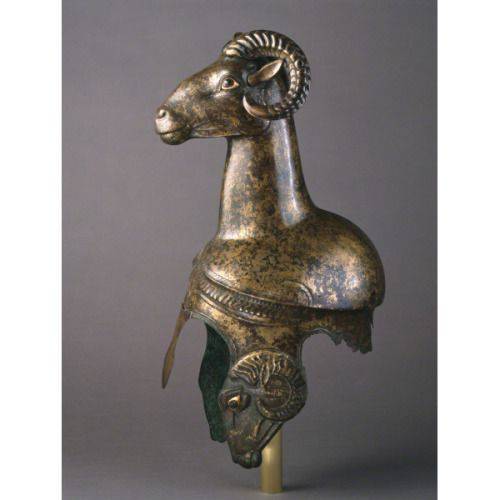 "Helmet with a ram." Discovered in southern Italy. Approximate dating 525-500 BC. er The helmet is unique in that it is made of one (!) Solid piece of bronze. It is believed that its strange shape and low weight indicate that it is a ceremonial product. That's what the Romans were learning! Art Museum of St. Louis, USA.

During the military expansion in the Middle East, the Romans became acquainted with another type of helmet - “Persian” or “ridge”, which was forged from two halves, which were connected to each other on rivets using a patch metal strip with a small crest, which played the role of a stiffener. A pair of headphones that went over to the cheek pads protected the face from the side, the back of the head was covered by another metal plate, which was fixed movably. Inside, all these parts are trimmed with leather. Such helmets in the late III - early IV centuries. were widespread in the cavalry, and in the infantry, first of all, apparently because they were easier to produce large parties [6]. 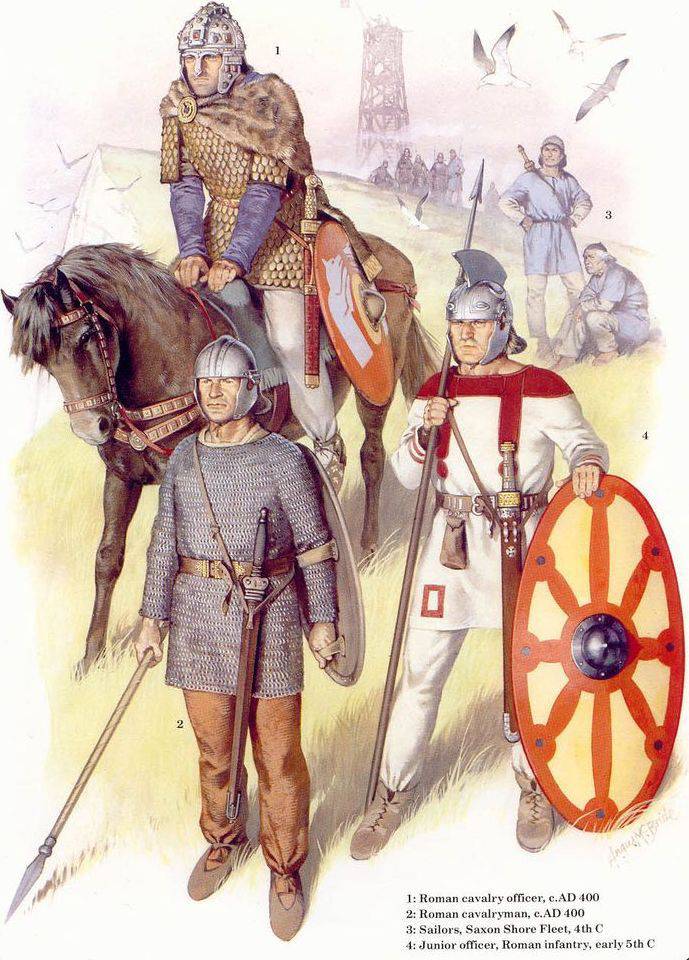 As for, for example, Syrian archers from the same column of Troyan, they wear the same helmets as the Romans themselves, whom they helped as allies. According to R. Robinson, the only difference was that their helmets were thinner than the Roman ones, and always stood out from separate segments. In fact, they are almost identical to the helmets (spangenhelm) of the barbarians, used throughout Europe in the IV - XII centuries. [7]

Bronze and silver-plated cavalry helmets with masks that completely cover the face, the English-speaking authors see, mainly, as belonging to equestrian competitions "hippika gymnasium", although they could have a combat mission. 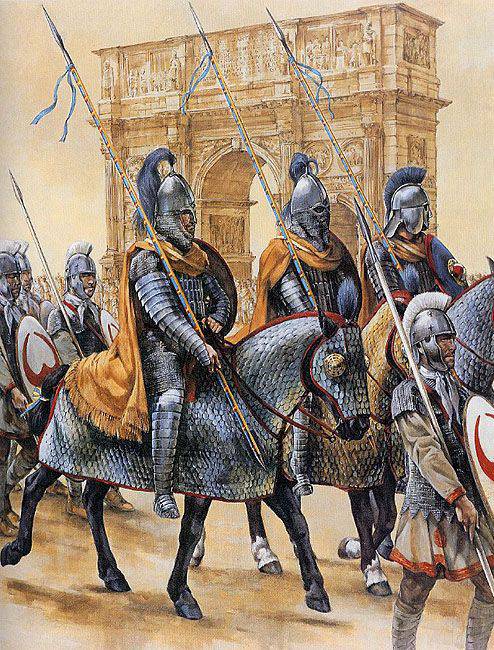 Parade of the cavalry of the clibanaria in Rome, 357. Artist Krista Hook.

Simon MacDuwal, who researched the “Table of Merits” (Notitia Dignitatum), noted that by the 5th c. AD the value of the armor of the Roman army decreased due to its barbarization [8]. The main means of protection for the warrior was the large oval shield of the auxiliary parts — the auxiliaries [9] and the Spangelhelm helmet (of four segments on the frame), which later became typical of the early Middle Ages. Shields of soldiers of one unit had the same painting, periodically renewed and serving to recognize one’s own and others.

Almost all English-speaking historians point out that the reason why the gladius sword with a blade for the injection spread in the Roman army was exclusively a tactic, since the legionnaires acted in close formation where there was no place for the longsword. At the same time, the Roman riders were armed with a longer sword, Spata, which eventually completely replaced the gladius.

The reason for this is seen by them in the changing nature of warfare. So, if before the legionnaires fought mostly against the same infantry, then at the end of II - the beginning of III. AD, when the gladius gradually gave way to the spat, they more and more often had to confront the barbarians with long swords, and not only in the ranks, but also in single combat. The role of cavalry has increased, which is why the more specialized weapon replaces the more universal one, not to mention the fact that mercenaries-barbarians with their weapons come to the service or Roman gunsmiths specifically produce for them what was their "hand". 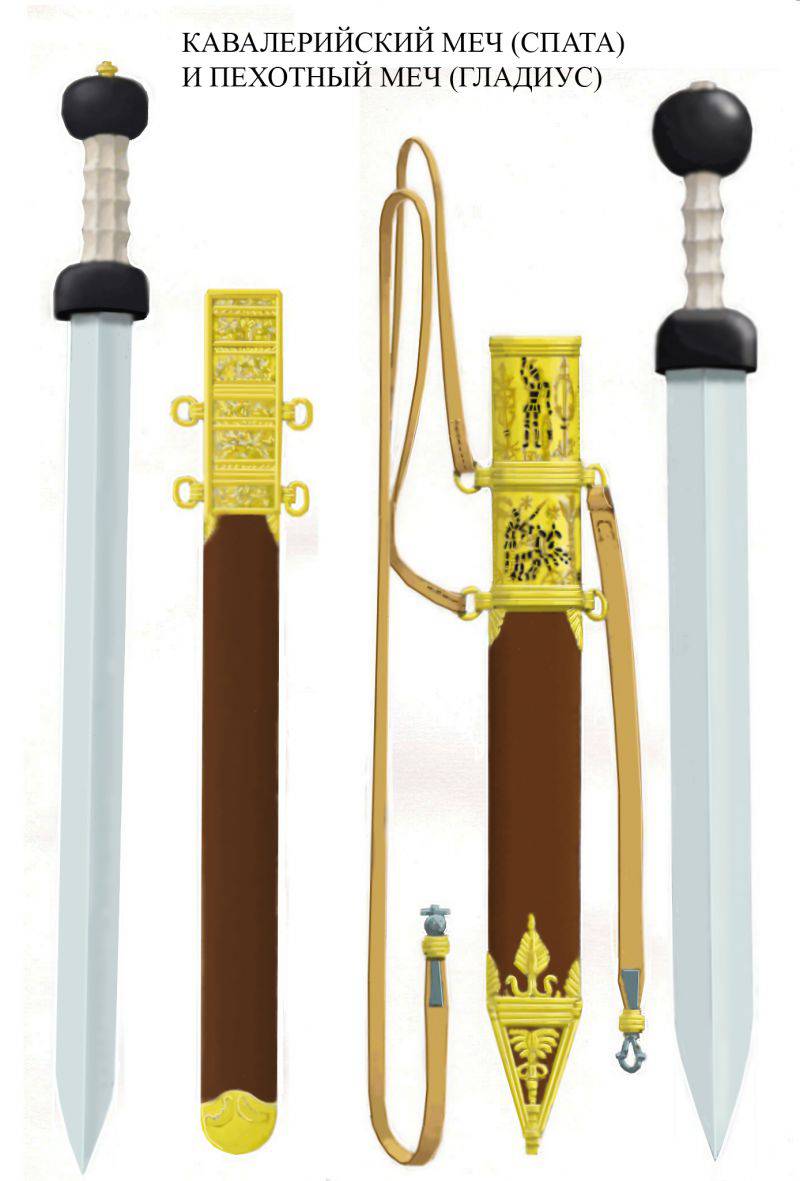 Armament was usually supplied to the soldiers at that time at the expense of the state, so that even in the difficult period for Rome of the end of the 4th - the beginning of the 5th century AD the empire had 35 "enterprises", which produced all kinds of weapons and military equipment, from shells to catapults. However, the rapid decline in production in the empire very soon led to the fact that already somewhere in 425, a large part of the army began to be equipped with its own salary. 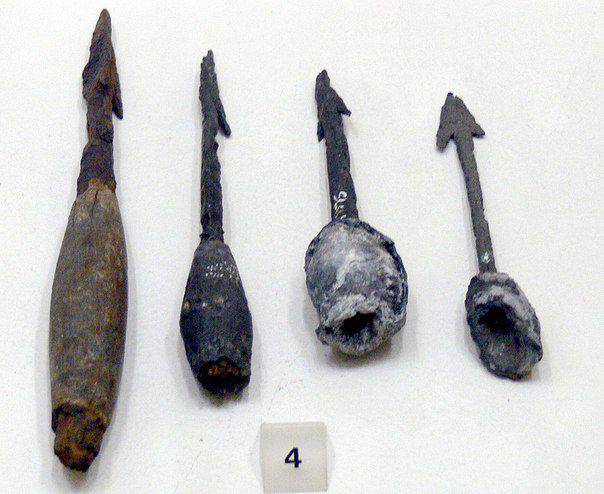 The tips of the Roman darts plumbata with lead weighting.

And it is hardly surprising that many warriors sought to buy cheaper weapons and, consequently, easier, and in every way avoided buying expensive protective armor. Both light and heavily armed infantrymen now dressed in almost the same way, and those who had armor put them on only in decisive battles, and in campaigns they carried them behind them in carts [10]. 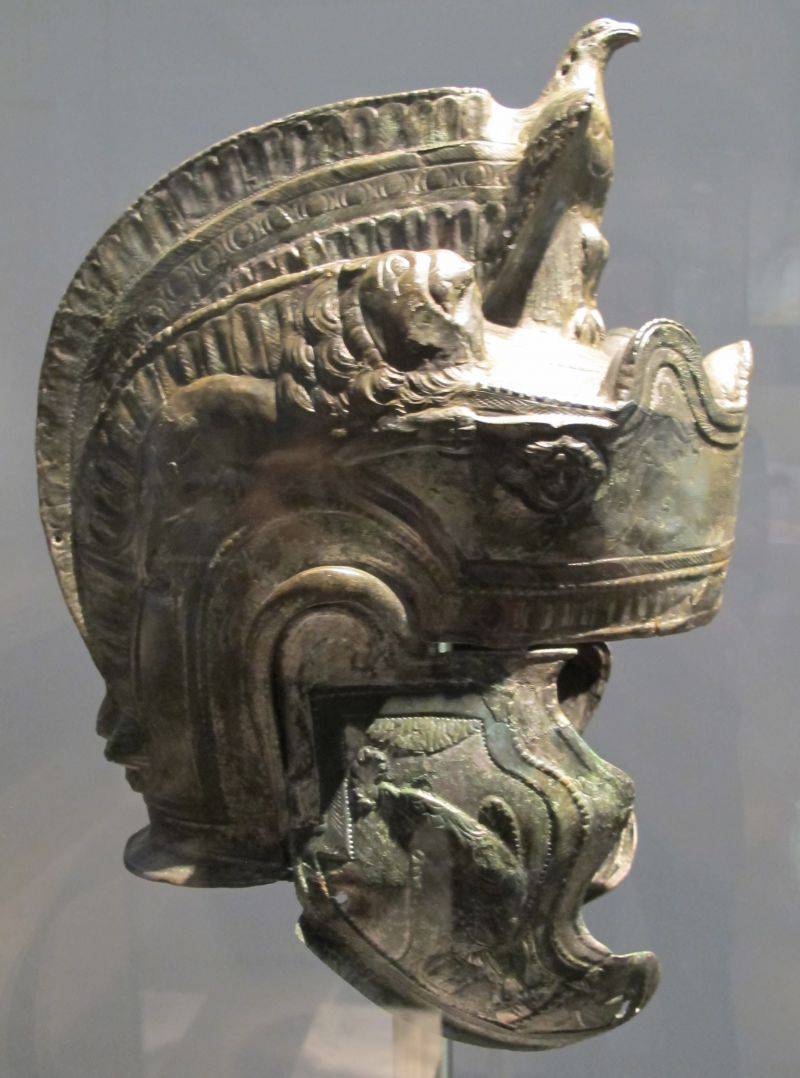 Magnificent and frankly tasteless helmet of the Roman rider from the tinned bronze of the era of the decline of the empire. Tylenhofen. Around 174 AD

But the chased Lorica of the Roman emperors, which were in use at the time of the legendary Romulus and Remus, re-became fashionable in the Renaissance. And helmets with visor and helmets for gladiatorial battles with wide brim (typical "cap de fer" of medieval infantrymen and horsemen) - all this was created and tested in this era, just like long knight spears and swords! 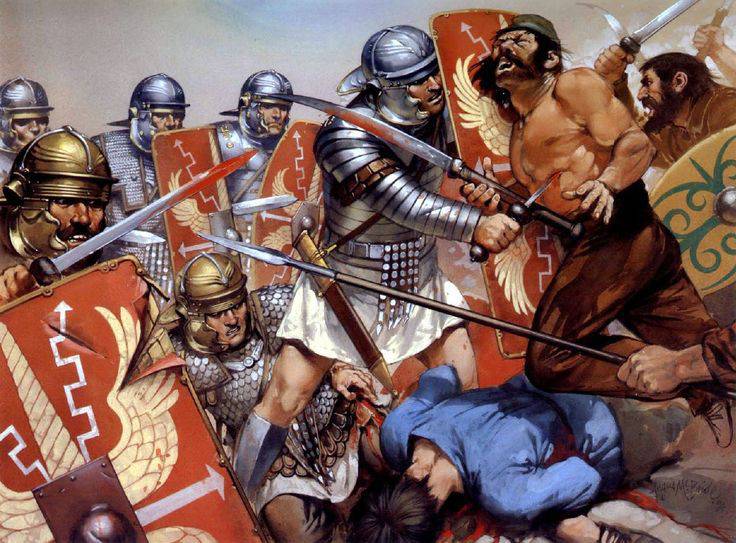 Roman legionnaires in battle with the Dacians. Illustration by Mac Bryde from Martin Vindow’s book Imperial Rome in Wars, published in Hong Kong.

Note that British historians explored each era of the Roman army separately [11], not only in time but also geographically, which was reflected in the series of enemies Enemies of Rome - 1,2,3,4,5 [12] Of course, it is impossible not to name the book by Peter Connolly quite affordable for Russians [13]. There are numerous works written on the basis of the work of English reenactors [14], and the “most illustrated” and most illustrative work is written by the editor-in-chief of the Osprey Publishing House Martin Windrow and is called: Windrow, M. Imperial Rome at war . Hong Kong, Concord Publications Co, 1996., However, it concerns only the imperial era of Rome. Well, the conclusion will be the following: the Romans in the field of armaments and in many other areas proved to be very skillful ... imitators, borrowing the best from the peoples around them and putting it "on stream". 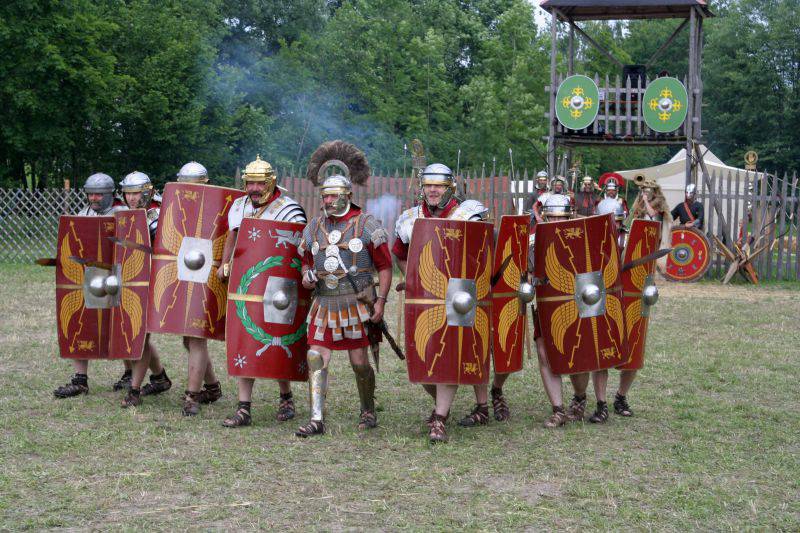 As for the death of the great empire, it did not happen because of the slave uprisings and the attacks of the barbarians - all this is not the cause, but the result of internal ills. The main reason is lead poisoning and impaired fertile function. The Romans brushed lead ridges, drank wine from lead jugs (it seemed so tasty to them!), And water to them also flowed through lead pipes. In the backbone of the Roman era that has come down to us, the lead empire is 10-15 times the norm. And how much was it then in soft tissues? So they died, leaving no heirs, and eventually Rome became simply no one to protect!

Ctrl Enter
Noticed oshЫbku Highlight text and press. Ctrl + Enter
We are
White armor and colored armor ... (part two)“White” and “colored” armor ... (part one)
162 comments
Information
Dear reader, to leave comments on the publication, you must to register.