February 1 2016
25
The Grumman A-6E Intruder is an all-weather deck attack aircraft that was designed in the USA at the end of 1950 and was intended to arm the Navy and Marine Corps. The aircraft was in service for three and a half decades and can be attributed to long-lived aircraft. The last Grumman A-6E Intruder was removed from service only in 1997 year. They were gradually replaced by carrier-based fighter-bombers F / A-18 Hornet.


Option A-6E is a late modification of A-6. The first flight of this car made 27 February 1970 of the year. Total US Navy received 445 such aircraft, including the 240 was converted from previously released versions of the attack aircraft. On the A-6E aircraft, the AN / APQ-148 multifunction radar was installed, as well as a more sophisticated navigation system. Starting in the 1979 year, a laser designator began to be installed on all aircraft, which allowed the use of bombs with a laser guidance system.

These aircraft have never been exported. In America, they were in service with the squadrons of the Navy and ILC, having received recognition from the crews, as evidenced by the numerous nicknames given to the machine: “Double Ugly”, “Iron Tadpole”, “Mighty Alpha Six” (The Mighty Alpha Six), Pregnant Guppy ”(Pregnant Guppy). Despite the designation of the model A-6E (letter “A” in aviation USA stands for attack aircraft), The Intruder was not a classical attack aircraft. By the set of its characteristics, it was more likely a deck bomber with a large bomb load and flight range. On board was a set of equipment that allowed the aircraft to carry out the bombing quite accurately. 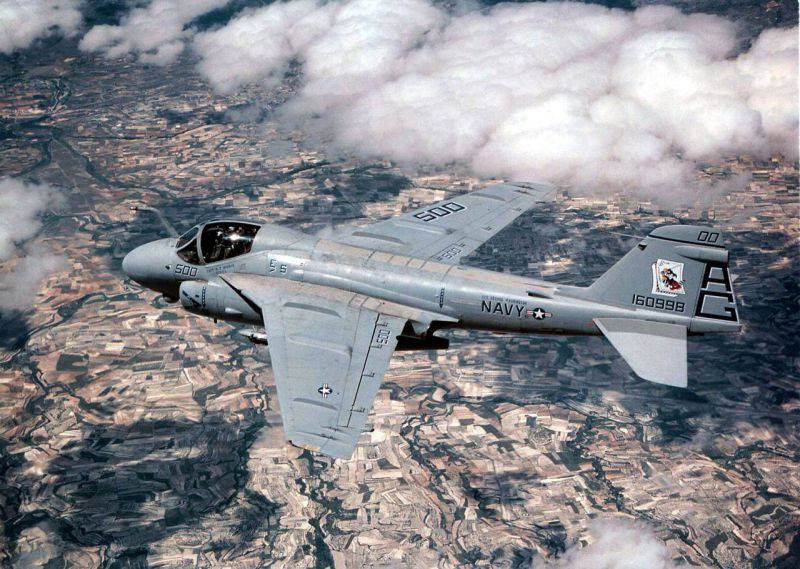 The aircraft was a monoplane with a middle-winged swept wing (25 °) with folding parts of the consoles and one tail fin. The wing root parts had a large sweep angle and special plates that were supposed to warn the pilot about the aircraft’s exit at critical angles of attack. The wing had flaps and slats throughout its span, there were no ailerons on the Intruder. For the control of the aircraft on a roll interceptors were used. When placing the attack aircraft in the hangar of the aircraft carrier wing console folded. Starting with the 26 aircraft, special fissile air brakes appeared at the wing ends. The tail of the machine consisted of a full-circle stabilizer and a keel with a rudder. In the tail part of the aircraft fuselage, initially there were perforated air brake surfaces. However, during the operation of the aircraft, it turned out that the deviation of the fuselage brakes reduces the thrust of the engines, and therefore, starting with the aircraft number XXUMX, the brakes on the fuselage are no longer installed.

The wing was considered the “weakest” place of the car. It was developed by Boeing, which has extensive experience in the use of composite materials. The wing on the A-6E Intruder was made entirely of carbon plastics, with the exception of the fuselage attachment points, which were made of titanium alloys. Above the wing was covered with a special conductive layer, which was supposed to protect the wing structure in case of a lightning strike.

The power plant of the A-6E Intruder attack aircraft was represented by a pair of Pratt & Whitney J52-P-8A turbojet engines with a maximum thrust of 4200 kgf each. These engines were located in nacelles on the sides of the fuselage. The length of the engine was 3,01 m, the diameter was 0,8 m. The air intakes of the engines were made unregulated, with vertical cutoffs of the boundary layer. In the internal tanks of the aircraft there was a fuel supply of 8870 liters, and in five outboard tanks, another 7570 liters of fuel could be placed. At the same time, the aircraft also received an in-flight refueling system. 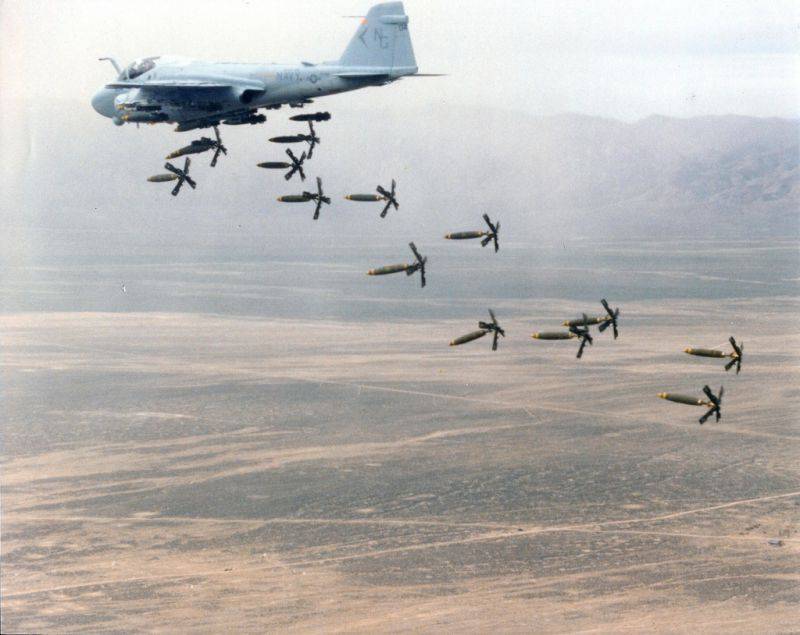 Chassis attack aircraft was performed three-post. The main landing gear retracts forward to the special nodules of the wing root. The front landing gear had two wheels. On the tailgate of the landing gear of the aircraft landing gear was placed a taxiing headlight, as well as a flashing red light. On both sides of the attack aircraft fuselage (on the air intakes) there were folding ladders designed for crew members.

In the cockpit were mounted two ejection seats manufactured by the British company Martin-Baker. These seats guaranteed to the crew of the aircraft a safe ejection through the enclosed cockpit canopy, which was proven in early versions of the attack aircraft in Vietnam. The movable part of the cockpit can be moved back. On the instrument panel of the pilot were placed two large indicators (vertical and horizontal environment) and about two dozen traditional pointer instruments. The navigator had a large radar indicator, while there were no stormtrooper controls in the navigator’s workplace.

Grumman A-6E Intruder equipment was represented by the most powerful at the time of attack deck carrier aircraft. It was based on the APQ-156 radar, which was placed on the latest A-6 series. This radar could find and accompany targets on the ground and the surface of the ocean. It provided an overview of the earth's surface with a selection of moving targets and data on the terrain, which allowed the aircraft to fly at low altitudes with a curvature of the terrain. The aircraft’s radar was complemented by the TRAM optoelectronic system, which on early machines compensated for its low resolution. Also, each aircraft was equipped with an EW individual protection station. The antennas of this station were mounted on external pylons for the suspension of weapons. 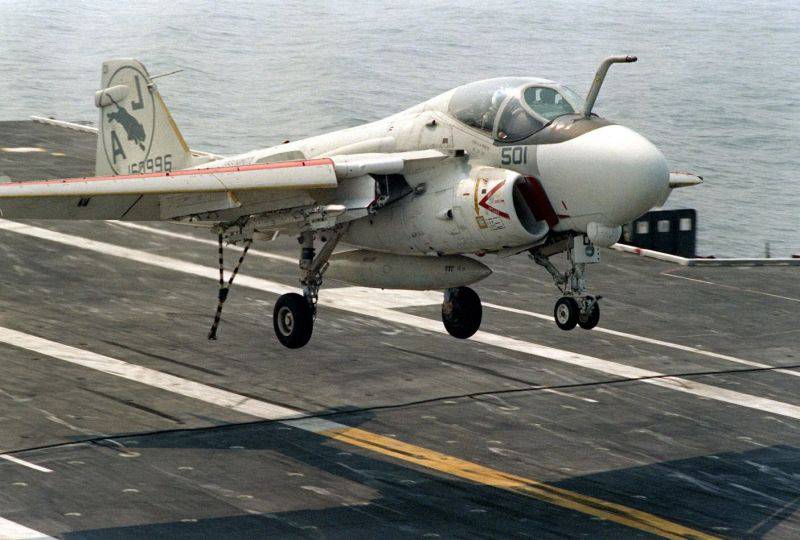 The TRAM (Target Recognition and Attack Multisensor) optoelectronic target recognition system appeared on board the Intruder aircraft in 1979. She was the closest relative of the US Air Force Pave Task container. This system was designed for detecting and tracking ground targets at any time of the day and in any atmospheric conditions, as well as for autonomous combat use of guided bombs equipped with a laser homing head on the target. The TRAM system sensors were located under the nose of the attack aircraft in a special ball joint on a stabilized platform. This arrangement of the TRAM has less impact on the aerodynamic characteristics of the aircraft than the suspension of a bulky container with the same equipment. The TRAM flight tests started in the 1974 year and ended in the 1979 year. The first aircraft A-6E, equipped with a new system, flew into the sky 22 March 1974 of the year. Before 1985, all A-6E attack aircraft received a TRAM system.

The special aircraft of electronic warfare, which received the EA-6В index, also became widespread. Its main equipment was the electronic jamming system of the enemy’s radar. This system included suspended containers (up to 5 units, by the number of suspension points), an antenna system on the keel of the aircraft and two onboard computers. In addition to the radar suppression system, the aircraft also had a jamming system for enemy communications. One such aircraft of the latest series could suppress the enemy’s 8 radar, as well as disrupt its communication system between units or aircraft in the area of ​​attack.

The A-6e attack aircraft had no built-in armament at all, all the armament was located on 5 suspension units (the maximum node load was 1633 kg). In the reloading variant and with incomplete refueling of the aircraft with fuel, the combat load reached 8160 kg. The armament of the aircraft included a wide range of various missiles and bombs: Garpun anti-ship missiles (up to 4-x missiles simultaneously), anti-radar missiles HARM, SD "Sidewinder" air-to-air missiles, guided bombs (UAB), NARs, and high explosive bombs - three 2000-pounds or 28 500-pounds. Instead of bombs, it was possible to take outboard fuel tanks with a capacity of 1130 liters each. The range of the attack aircraft with two harpoon anti-ship missiles was over 800 km. Also, on the basis of the attack aircraft, the above-mentioned EW EA-6В Prowler and the KA-6D Intruder tanker aircraft were created. 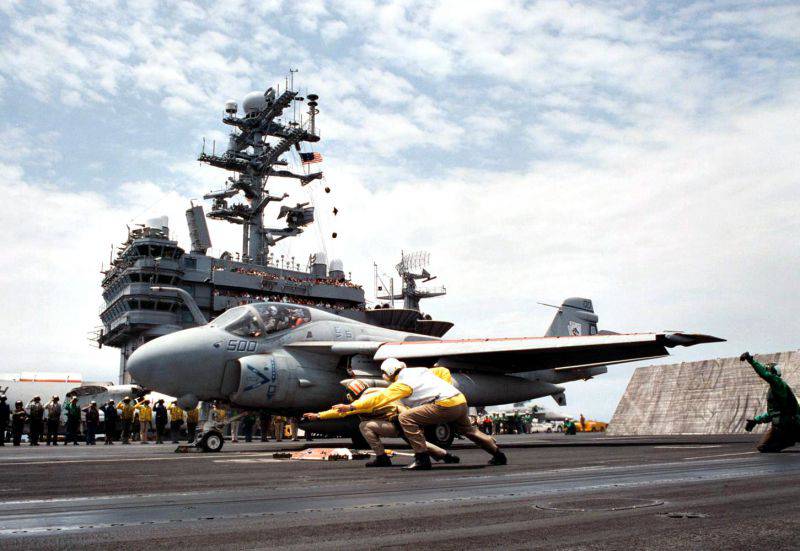 Grumman A-6E Intruder attack aircraft managed to take part in many US military operations at the end of the 20th century. So in 1983, they took part in supporting the American landing party in Grenada. In December of the same year, during a raid on the positions of Syrian troops in Lebanon, one attack aircraft was shot down (one pilot was killed, the second was captured by the Syrians and released only a month later). In March, 1986, these aircraft using AGM-84 anti-ship missiles sank two patrol boats belonging to the Libyan Navy, and on the night of April 15 as part of Operation Canyon Eldorado, raided Libyan military facilities located in the suburbs of Benghazi. In April 1988, A-6E aircraft took part in the sinking of the Iranian frigate Sahand as part of Operation Mantis.

The last major episode in the combat biography of Intruder was their participation in the large-scale Operation Desert Storm in 1991. At that time, the US Navy and the International Police Commission used more than a hundred attack aircraft to attack Iraq’s industrial and military sites, as well as directly at military units. Two years after that, A-6E aircraft took a symbolic part in the UN peacekeeping operation in Somalia. In addition, they were used to patrol non-fly zones organized over Bosnia and Iraq.

At the end of 1980, Grumman’s proposal to carry out a radical modernization of the fleet of released A-6 attack aircraft was rejected by representatives of the US Navy. Although the new deck attack aircraft A-12, which was planned to replace the Intruder, was never built, the A-6 began to be removed from service. The process was finally completed at the start of 1997. At the same time, some of these aircraft were even flooded off the coast of Florida to create the so-called "Intruder Reef". 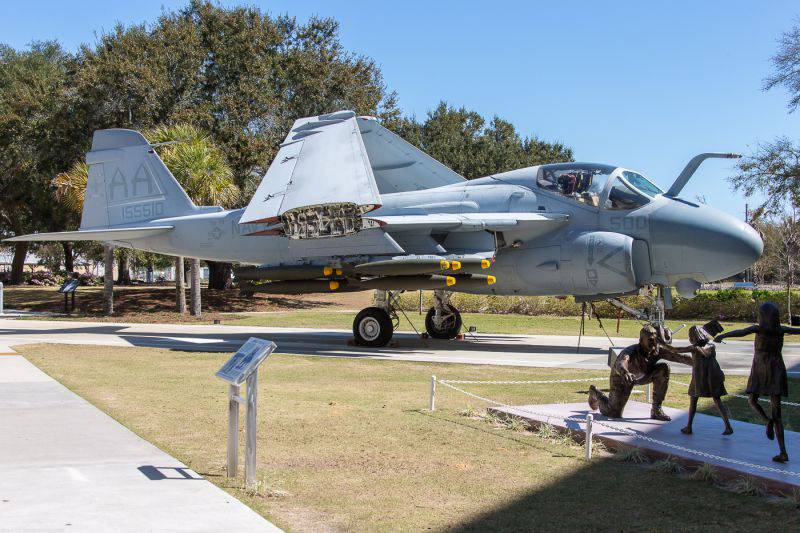 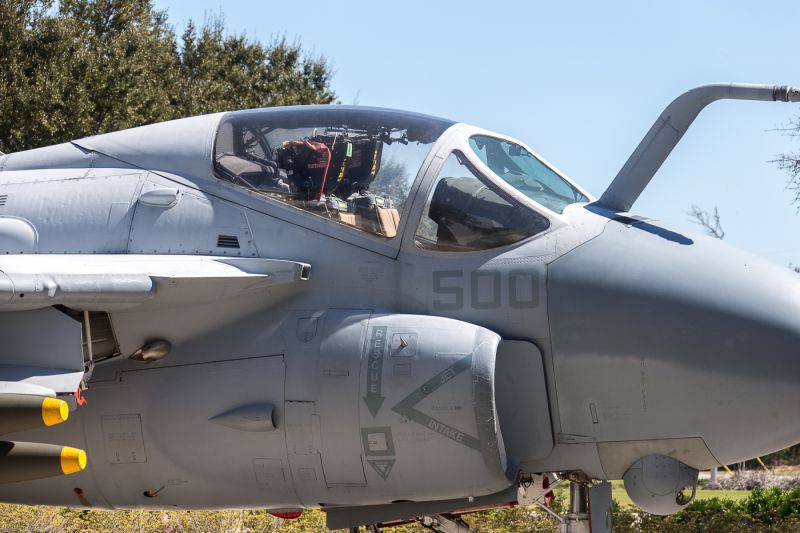 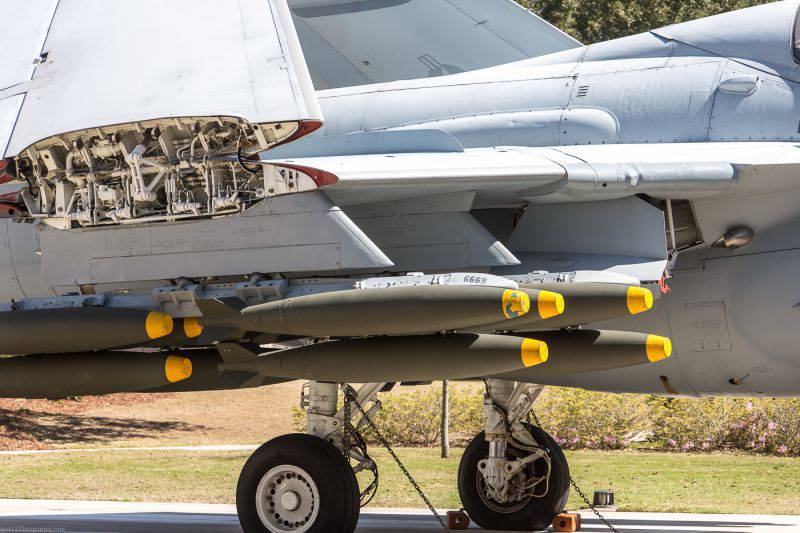 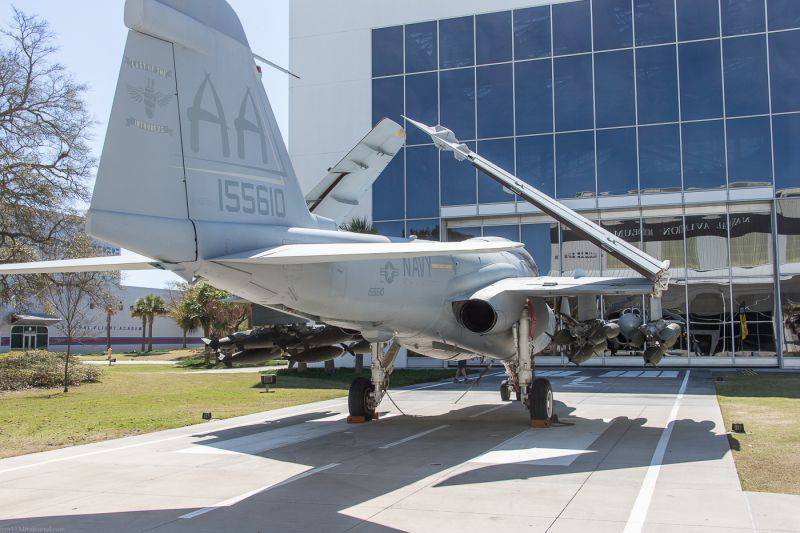 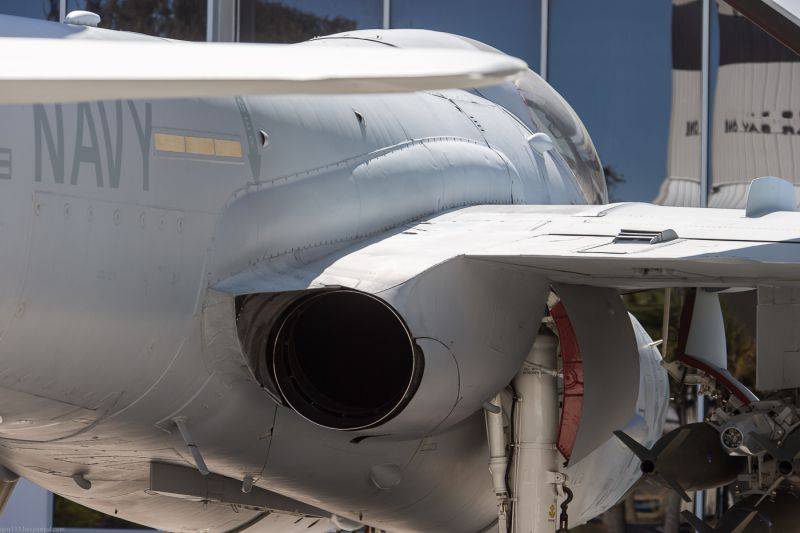 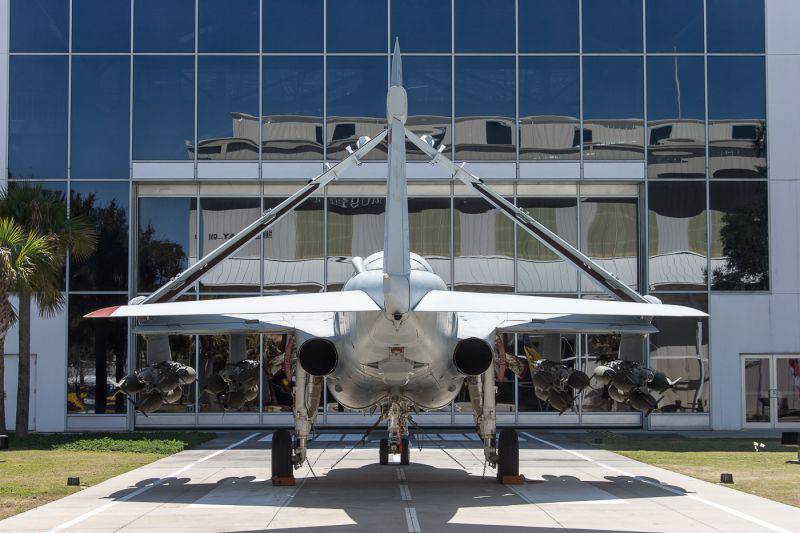 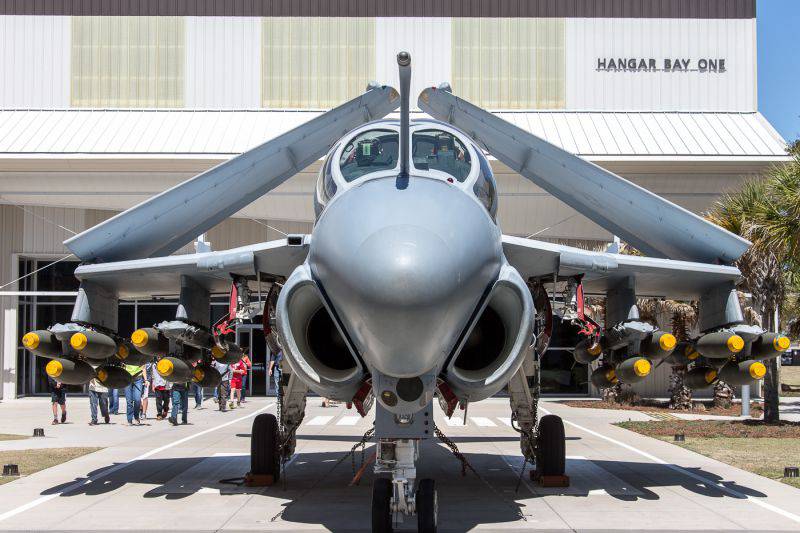 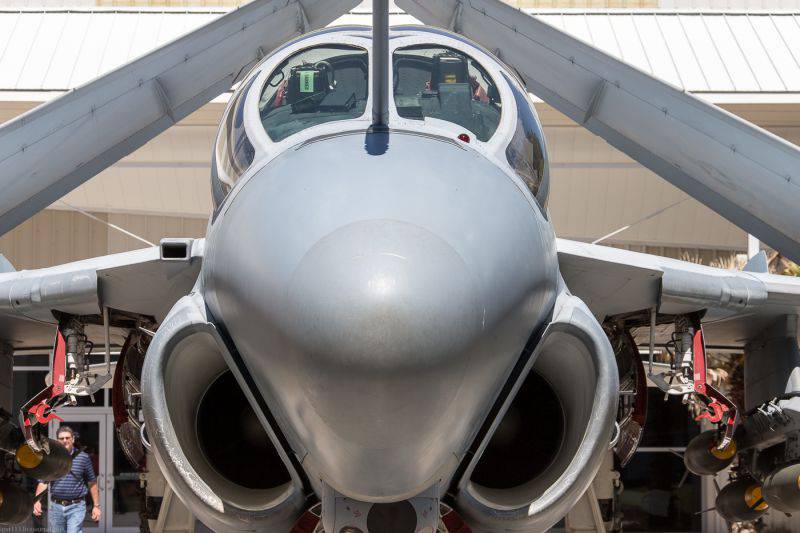 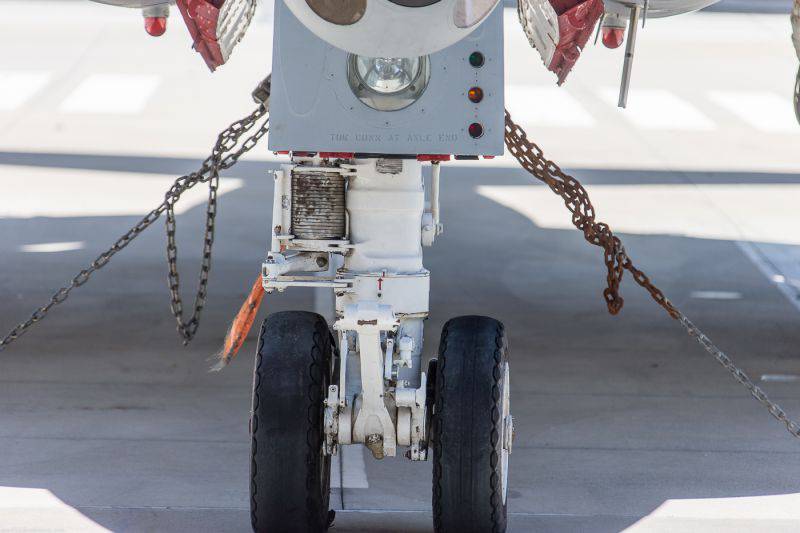 Ctrl Enter
Noticed oshЫbku Highlight text and press. Ctrl + Enter
We are
Deck helicopters of the Romanian Navy. Part 2An-12 in Afghanistan
25 comments
Information
Dear reader, to leave comments on the publication, you must to register.