Belated remorse, or the truth about Putin’s billions

January 29 2016
388
Let's talk about repentance at the end, but let's start with the truth. The bitter and hard truth about the billions earned or stolen by Putin. After all, this film is devoted to the Air Force film "The Truth about Putin's Riches." Wealth with a capital letter - not in vain. It is precisely the Wealth, since we are talking about amounts that are not that fantastic, but, so to speak, weighty.


The film is small, so you can throw out of your life a little time and evaluate the quality of the work of the Air Force. It’s worth seeing, after all, the British nationwide public broadcaster.

The film directly tears the soul. Unhappy people hiding in the dark corners of the world from the long arm of the Kremlin, risking their lives and health, give such important readings, past which it is simply impossible to pass.

However, there are nuances that make you think more deeply than the filmmakers had planned. In general, the Air Force expected more thoughtful and profound work than an emotional kindergarten.

The evidence base is missing in principle. And the tales in the style of "we know everything, but do not say where we took it" causes a kind of slight bewilderment and a burnt-up chair.

The newest yacht allegedly donated to Putin by Abramovich, as it turns out, was built in the 2014 year. Well, in no way could Abramovich present it to Putin in 2002, unless he has no time machine. If you have noticed and documented the fact of the gift, so show this gift, and do not invent something that is sewn with white thread.

The display of "financial documents" is designed for the mentally retarded. Sorry, gentlemen British, but any student on his printer for a couple of euros will make you a mountain of such "documents." What apparently happened. But the figure in 202 million was voiced very clearly and loudly. Why 202? Why not 404? What trifle?

Evidence document is a document from which it can be concluded who, to whom, when, and how much. And the schoolboy’s creativity shown by the authors of the film costs exactly as much as paper and ink on it.

A separate masterpiece is the story of the lady that Putin has SUCH things that European billionaires never dreamed of. Pay attention to the video series accompanying his words. One gets the impression that European billionaires are some kind of half-bombs who cannot afford a normal training room. By the way, the hall is good, but I do not think that it was filmed in Putin’s apartment. The size is not the same.

Further. Tricycle ... Well, yes, where do billionaires have such a technique, right? A collection of expensive watches ... Yes, this is scary. Although the collection was not shown. Probably too secret. Or, quite possibly, the same allegations as the "documents". A tracksuit for 3 000 dollars is an exorbitant waste for any wealthy person in the world. Yes, back to the video. Are these pants worth 1500 bucks? For the European rich becomes scary. 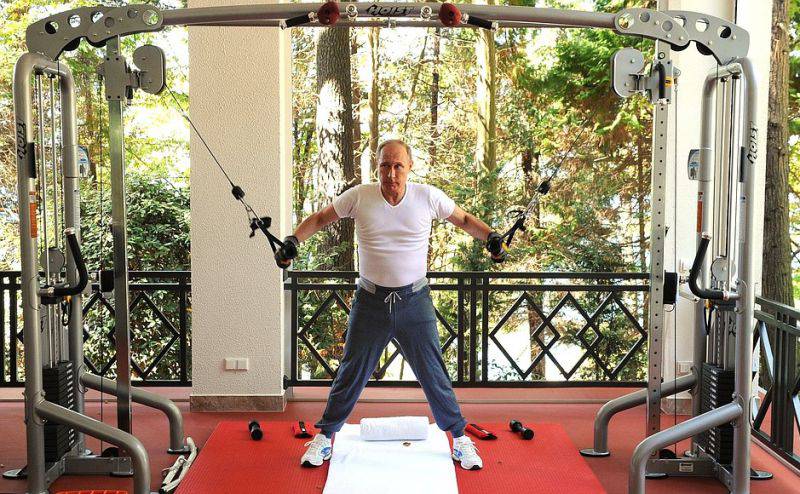 In one I agree with the authors. Yes, Putin is truly one of the most influential people. And it's not at all in how many sports suits he has for 3 000 dollars and watches. Probably, the fact is that Putin has the whole Russia behind his back. But let's move on.

Separate words deserve witnesses in the film. Such a bunch of "I think," "most likely," "so they say," "reliably known," and the like. In short, all the same radio "One Grandma said," no more. I do not know what was difficult to find such witnesses, what were the difficulties.

In general, it seemed that the correspondent stupidly missed all the money on his business trips, then he found someone willing to make a couple of words in the camera, and he calmed down. But the creative group so well rode the world at the expense of the institution.

Interestingly, the accounting department was not stunned by the reports? Especially in St. Petersburg, where the group traveled long and dreary to the house where Putin lived as a child. To remove the 10 seconds panorama of the courtyard. By the way, St. Petersburg, do not enlighten, be sure to swim on a boat to this place? Or is it just minutes 10 walk from the subway?

And what is the essence of the accusation, based on the results of the trip to St. Petersburg? And the fact that Putin made a gang in St. Petersburg from the same people who wanted to get rich, and with it he came to power. A terrible accusation. Apparently, presidents are grown all over the world in test tubes and kept there until the start of the presidential campaign. Yes, according to some politicians of the West, it is possible to draw such a conclusion. But they, nevertheless, have their own teams.

And the numbers ... the numbers just touches. Belkovsky was dragged out of oblivion in order to name the sum. Given who Stanislav Belkovsky is, it is not surprising that he received the figure "from secret sources." 40 billion in "shares of the largest Russian companies." Naturally, no accurate data. Where did they get them. Oh yes, from the telephone records. And why 40? Why not 100 or 150? So surely.

Who wrote? Where did you write? Whose talk is this? Frank nonsense. Calling on the phone the alleged number in the thousands do not understand what, saying that for Mikhail Ivanovich. It is not even a kindergarten. These are nurseries for children with cerebral palsy. Who is Mikhail Ivanovich? Ah, yes, of course, this is Vladimir Vladimirovich! Well, only a frank oligophrenic will not understand this alignment. Apparently, I'm oligophrenic, I confess. I was "not inserted."

Why Mikhail Ivanovich? Why not Sergey Vladimirovich or Vitaly Evgenevich? Oh, they so encrypted ... No words. Bi-bi-si, buy me a recording of a telephone conversation, where one very famous person, close to who you know, talks with a man who promises one million for organizing a meeting with Fyodor Petrovich. Nothing that a voice recorder today is in any more or less decent phone. The main thing is that in the next fairy tale Putin may be called Fyodor Petrovich for the sake of conspiracy. The essence of this will not change, but there will be hot proof on hand.

And about the poor robbed oligarchs like you? They are silly, they thought that they are taking levies on health care, and with this money Putin built himself locks and bought yachts. Nothing that he never appeared in the castles and apartments in Spain, and did not get on board the yacht even once. The main thing is that there are locks, and there are yachts. So, Putin will once be able to use them. What is an unequivocal proof of his guilt.

The only thing missing is a telephone conversation recording, where it would be announced that the money that allegedly went to Putin was stolen from the budget or from the Pension Fund. It would be quite good.

So, we have a president who has been robbing our country since 2002. He owns shares, naturally, through nominees, has yachts and supercars, which are not used by apartments and castles, in which his legs were not. And tell me, how can a person who not only eats into his head, take it all on faith? Does not work.

Apparently, indeed, in order to devour all this, we must comply with the postulate that “not everyone can look today in tomorrow. Rather, not only everyone can watch, few can do it. ” And see not only smells.

Gentlemen, opponents, of course, will say that this is another attempt to whitewash Putin. Naturally unsuccessful. Because the Air Force cannot lie to the entire planet in this matter. Can not...

I must say that I did not pursue such a goal. There is no need to whitewash Putin, and the Air Force. For it was given to the ears.

Now back to repentance. There is such a feeling. I repent, respected this channel. For good series, for great programs about nature, for World even when it was Civilization. And now sort of ... At the level of a gang of teenagers from Yutub, who imagines himself to be great detectives. Selected a fairy tale.

Anyone who has seen this movie around the world, will draw its own conclusions. Someone Putin will remain a scarecrow robbing Russia. Someone will have a different opinion. There is already depending on the ability to use the head. To each his own.

Ctrl Enter
Noticed oshЫbku Highlight text and press. Ctrl + Enter
We are
Results of the week. “Have you had any construction accidents?” Did not have? Will be! "Results of the week. “So according to a dozen of you, citizens. For a dozen per capita "
388 comments
Information
Dear reader, to leave comments on the publication, you must to register.