February 4 2016
4
In 1915, the soldiers of Austria-Hungary first collided with an Italian submachine gun Villar-Perosa M1915. A double-barreled system with two independent automation units could fire at a rate of up to 3000 rounds per minute, which was completely offset by the relatively weak pistol cartridge. "Acquainted" with such weapons the enemy, the Austro-Hungarian soldiers wanted to get their system of a similar class. It was decided to take the Italian idea and recycle it in accordance with the capabilities of its industry. The result was the Frommer Stop M.17 product, which was produced in a limited series and was not used for long by the army.


Coming from an aircraft rapid-fire machine gun project, the Italian system Villar-Perosa M1915 had several unusual features. In addition to the already mentioned architecture with two independent automation units, it is necessary to note the use of a pistol cartridge, which gave the weapon specific characteristics, as well as the use of several machine variants: tripods and special pallets. All these features of enemy weapons interested the Austro-Hungarian military and gunsmiths, because of which the new project was to become, to some extent, a copy of the Italian.

In addition to direct borrowing of ideas, the new project proposed to apply their own work. Thus, the basis for a promising submachine gun was to be the existing serial self-loading pistol. The most convenient option was considered a Frommer Stop pistol from Budapest's company FÉG. It was on its basis that they decided to build an automatic weapon with two independent blocks and two barrels. The choice of basic weapons also affected the name of the project. New submachine gun stayed in stories under the designation Frommer Stop M.17, because of which it can be considered as a variant of a deep modernization of the base pistol. 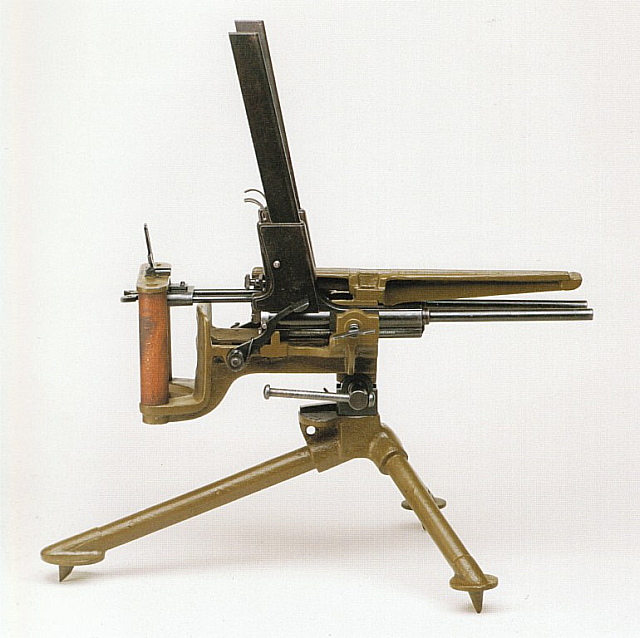 In the basic version of the gun Frommer Stop was a typical representative of its class. It was a self-loading weapon chambered for the .32 ACP with a detachable seven-round magazine and automatics based on the long stroke of the barrel. In 1912, the gun was adopted by the Austro-Hungarian army and soon became one of the main weapons of its class. In the future, based on the basic design, several modifications were created that differed from each other in the type of cartridge used.

For use as the basis of a submachine gun, the Frommer-Stop product has undergone a number of major changes. The design of a number of components and parts was finalized, and the purpose of these changes was to ensure the required operating modes, increase the number of parameters, etc. It is noteworthy that, despite all the changes, the base pistol retained a recognizable appearance, although it lost a number of external details.

It was obvious that the seven-round magazine was completely unsuitable for use with a submachine gun, even if it was a “double” design. For this reason, a new box magazine with a capacity of 30 cartridges was developed. This device was a significantly elongated base magazine and retained its main features. Shops were still asked to place the modified pistols inside the arms, which made it necessary to redo the latches that secure them. Due to the increase in the length of the store, the latter received characteristic elongated curved handles.

When remaking into a base for an automatic weapon, the Frommer Stop pistol retained the frame, grip covers and the fixed casing of the bolt. However, some external parts have been removed. So, the trigger and its safety bracket were removed, and the cheeks were missing from the handle. Such changes were fully justified, since the new weapon was not planned to be held in the hands during the shooting.

To improve the performance of fire pistol received a new barrel of increased length. In the basic configuration, a rifled barrel with a length of 95 mm was used, and after reworking, the length was increased to 200-220 mm, which made it possible to significantly increase the initial velocity of the bullet and the associated fire parameters. The new long barrel was mounted on the site of the old, and most of it protruded beyond the casing of the bolt. 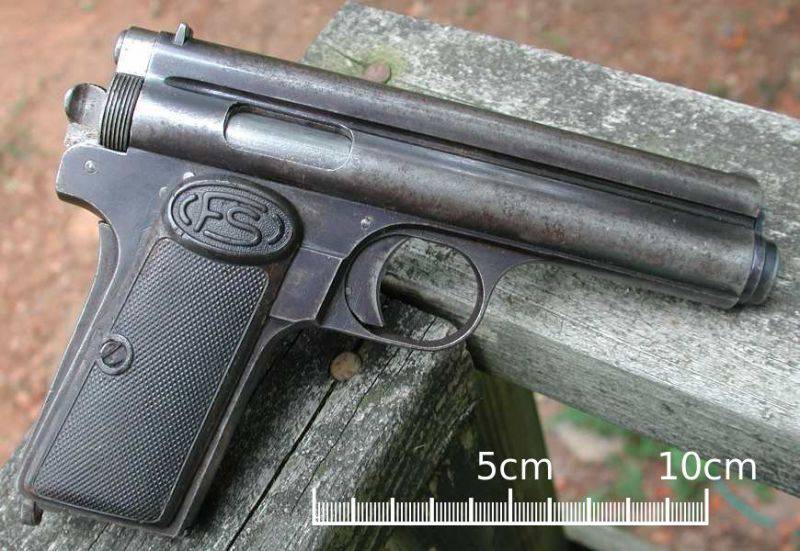 The intended use of weapons affected the design of the firing mechanism. The sear and other details of this site have been reworked and changed their shape. In the new configuration, they had to provide automatic fire bursts. Shooting single, probably did not provide. In addition, the gun lost its traditional trigger. Instead, it used a pin with a button-trigger, displayed on the back surface of the handle.

The submachine gun Frommer Stop M.17 was to some extent a copy of the Italian Villar-Perosa M1915, which accordingly affected its layout. The structure of this weapon included two converted pistols. In the inverted form, with the handle and the magazine up, they were suggested to be mounted on a special machine with fastening, guidance and fire control systems.

The basis of the machine was a tripod with spikes, openers for reliable retention on the ground. In the upper part of the tripod, mechanisms were provided for horizontal and vertical guidance of the weapon with the possibility of fixation in a certain position. Directly to the mechanisms of guidance joined the frame with fasteners for two inverted pistols. At the same time the weapon was held at the front of the frame and the casing of the bolt. On the back of the frame provided mechanisms for cocking weapons. On its sides there were two levers located on the same axis, which, through special projections, contacted the bolt handle of the pistol. With the lever back, the frame was pulled back and the weapon was cocked.

On the back of the bed was an L-shaped device with vertical arms, typical of machine guns of the time. Probably, the Austro-Hungarian military assessed such a design of the Italian sample and decided that it should not be abandoned. On a metal base were fastened two wooden handles, between which there were two trigger flaps. The latter were connected with the trigger devices of two pistols using two pistols. Clicking on the trigger, the shooter could fire from one or two "blocks". 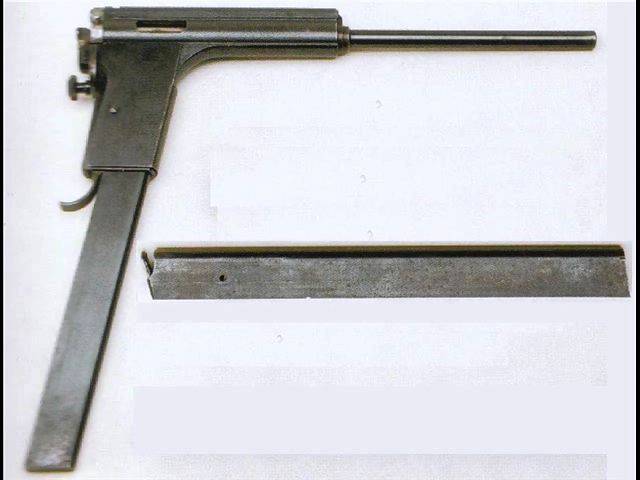 Pistol after rework and his shop

Aiming was proposed to carry out using the devices of the simplest design. On the upper strap handles of the machine had a folding pillar. The fly was located on a special bar, passing between two pistols.

The resulting design allows automatic fire from one or two barrels. The exact characteristics of the Frommer Stop M.17 system, unfortunately, are unknown. It can be assumed that the use of a relatively weak pistol cartridge did not allow effective fire at ranges greater than 100-150 m. The rate of fire could reach several hundred rounds per minute, which required the shooter to closely monitor the ammunition consumption.

For various reasons, the development of the first Austro-Hungarian submachine gun, based on Italian ideas, was delayed. Viller-Perosa M1915 products appeared at the front as early as 1915, and the new Frommer Stop M.17 reached the troops only two years later. After passing the tests, this weapon, apparently, was made in a small series. Serial samples were delivered to the troops. Preserved photographs, which depict the calculations of such submachine guns in firing positions.

According to some reports, a certain number of Frommer Stop M. 17 submachine guns were transferred to the mining units of the Austro-Hungarian army. This weapon was used in battles on the Italian front and probably did not show any outstanding results. The set of characteristics of the original weapon was inferior to other models, both foreign and in service with Austria-Hungary. The full-scale rearmament of troops using Frommer Stop M.17 did not start.

And yet the army needed machine pistols, including those similar to the Italian M1915. According to some reports, in 1918, Austria-Hungary started producing copies of Italian double-barreled machine guns. Until the end of the war, a number of such weapons had time to get into the troops and, possibly, were operated in parallel with their own double-barreled systems. However, it was too late to hope for a change in the situation. The war ended, and no new weapons could not prevent it.

The Austro-Hungarian project of the Frommer Stop M.17 submachine gun, despite the lack of noticeable success, is of definite historical and technical interest. Like many other countries, Austria-Hungary needed high-performance automatic weapons suitable for mass production. The solution to this problem could be the project of an automatic double-barreled weapon based on the existing self-loading pistol. However, as practice has shown, such expectations were not met.

There are several reasons why the Frommer Stop submachine gun M.17 did not leave the small-batch production stage. First of all, this is a very specific and ambiguous concept. In the future, automatic weapons for a pistol cartridge became widespread, but it was originally designed as personal equipment of fighters, suitable for carrying and not needing machine tools, etc. devices. The Austro-Hungarian model, in turn, could only shoot from a machine that made it difficult to move around the battlefield. It can be assumed that the mass of the machine with mounts and guidance systems was several times greater than the weight of two pistols with magazines and, possibly, wearable ammunition. It should be noted that the Italians also faced the problem of mobility, but successfully solved it with the help of a rifle box. The Austro-Hungarian weapon was not completed with similar units and remained on the machine.

Austro-Hungarian soldiers with various small arms. In the foreground is a fighter with a Frommer Stop submachine gun M.17

The second minus can be considered the use of two independent blocks with their own automation, unrelated to each other. The use of such an architecture in theory made it possible to increase the rate of fire, but in practice these advantages were dubious. First of all, the problem was the increased consumption of ammunition in the absence of a noticeable increase in the effectiveness of the fire. In the case of the Italian weapon, this eventually led to the creation of a full-fledged manual submachine gun with a single barrel.

Using the existing self-loading pistol as the basis for a submachine gun can be considered an ambiguous feature of the project. Indeed, this has reduced the development time by using ready-made components and assemblies. On the other hand, gunsmiths still had to develop an elongated barrel, a new magazine, and upgrade the trigger mechanism to work in automatic mode with control through the trigger. Finally, the machine was also developed almost from scratch. As a result, all the advantages associated with the use of finished products were offset by the need to create a mass of new parts.

The result of long and complex work was the emergence of a curious, but unpromising sample of small arms. The submachine gun Frommer Stop M.17 could not significantly increase the firepower of the units and thereby improve the combat capability of the troops. As a result, he did not reach mass production and was unable to influence the course of the war. In the history of this weapon remains only as another interesting technical curiosity.