BRICS - USA: fight for the IMF

January 29 2016
14
As is known, at the end of 2015, the IMF behind the scenes decided that Ukraine's delay in loan payments and the automatic default of the Ukrainian economy is not an obstacle to continuing lending to the “square”. Ukraine was introduced to the IMF lending program, and introduced with the explicit goal that not only the main builders of Ukrainian democracy, who you know yourself, were engaged in lending, but also all those countries that have membership in the International Monetary Fund and act as donor countries of the fund.


As a result, the situation has been reduced to completely absurd. By introducing Ukraine into the IMF program, this very IMF is trying to force Russia to continue lending to the Ukrainian economy, despite the fact that Russia has not received timely payments from Ukraine on the 3 billion-dollar loan. More precisely, it is not so much to force a loan, how much to simply put before the fact: they say, the loan goes also to yours, the Russian taxpayer, the funds - at our highest permission.

In the Russian government, they were offended by this fact, and decided, for their part, to influence the behind-the-scenes whispered by representatives of the International Monetary Fund office. Thus, the Deputy Minister of Finance of the Russian Federation Sergei Storchak said that Russia is stepping up its work aimed at strengthening the position of the BRICS countries in the IMF. According to Storchak, the consolidated share of votes of the BRICS countries should have a more significant role in the International Monetary Fund than the one that exists today in terms of individual BRICS countries (Brazil, Russia, India, China and South Africa). 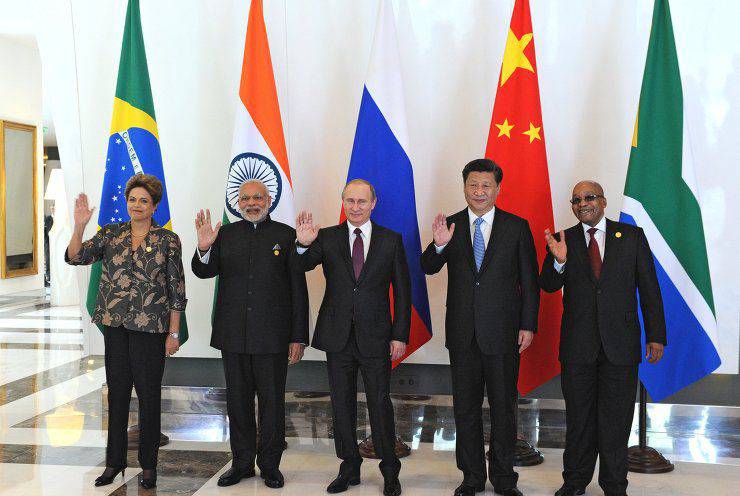 It is necessary to provide some background information eloquently demonstrating the layout of the "forces" in the IMF. The USA has the largest quota in the IMF in the amount of 16,7%. All the BRICS countries taken together - 14,7%. And even then, such a BRICS quota became only the other day - January 27. Until last Wednesday, she was 14,18%. The whole point is that, despite the apparent proximity of quotas, there is a gulf between them. And the gap between them is because the presence of a quota in the amount of only 15% allows you to use the veto right. In other words, the United States has the veto right (that is, the right to block any non-compensating US proposal), and the BRICS countries do not have the right to veto. And the BRICS quota, which is clearly visible, is clearly deliberately kept below the 15% mark. And there is no veto right, as you can see, not just for each BRICS country separately, but even for the whole union with its total population under 3 billion people.

In BRICS itself, such an alignment in the IMF is considered, to put it mildly, unfair and they intend to work on reducing the US quota and simultaneously increasing their own quota. It would seem, for what? After all, an increase in quota is the growth of investments in the fund. But this is a strategy. After all, if the psychological mark in 15% is reached, then BRICS will have a real consolidated voice, able to dictate its own conditions through the IMF. After all, while the IMF is a platform serving only American interests.

From the statement of the Deputy Minister of Finance of the Russian Federation:
The immediate task: to consolidate the positions of the BRICS countries on the IMF's activities. It is necessary to collect proposals for the forum to solve the problem of obtaining the right of veto when voting in the fund, as is the case with the United States.

Russia assesses the entry into force of the Seoul agreements (quota allocation agreements - author's note) as a positive, but intermediate step. Work on the redistribution of quotas in favor of developing countries and countries with emerging markets will continue as part of the XV accumulation of fund capital.

The nearest reform of the IMF, if it is carried out, reduces the US quota by 0,2%. Not much, but the American "partners" hold their teeth even for this seemingly ridiculous value. Why? Yes, because really afraid to lose full control over the IMF.

In order to leave its hegemony in the International Monetary Fund unshakable, in the United States and its closest satellites they decided to go the usual way - to lay a grenade. So, in the publication of the Financial Times immediately after the revitalization of Russia in terms of increasing the BRICS quota, a materialchik turned to himself. The newspaper reported that BRICS (the material speaks about BRIC - that is, already without South Africa) has long outlived itself, so, in fact, without becoming a fully consolidated economic megastructure. To say that this is the first statement of this kind from Western "friends" is not necessary. Similar statements were made before. But there is a FT publication and its own novelty. The fact is that the authors of the material, as if overthrowing the BRICS, decided that in modern conditions the TICK union might be more efficient. These are Taiwan, India, China and the Republic of Korea. The material even cites a “major expert” who states that BRIC “is not a growth mechanism for a developing economy,” and that TICK could be much more efficient.

It would seem, why even pay attention to this kind of publication? But you have to pay attention, if only because it is these publications that are designed to prevent one of the most serious steps of BRICS - to gain the opportunity to defend their interests in the IMF. The United States is simply trying to use the old “divide and conquer” formula again, and if they understand this in the BRICS conglomerate, they will not succumb to provocative steps and continue to systematically bend their line. The potentials are huge, there are plenty of common interests too. And in response to the fact that “BRICS is no longer the same,” the United States in response can receive an information pill in the style of “and the states themselves are not as united today as they are trying to imagine” ...

Ctrl Enter
Noticed oshЫbku Highlight text and press. Ctrl + Enter
We are
BRICS: friendship against the dollarBRICS: a blow to unipolarity
14 comments
Information
Dear reader, to leave comments on the publication, you must to register.