The myth of the gladiators: universal suicide bombers? 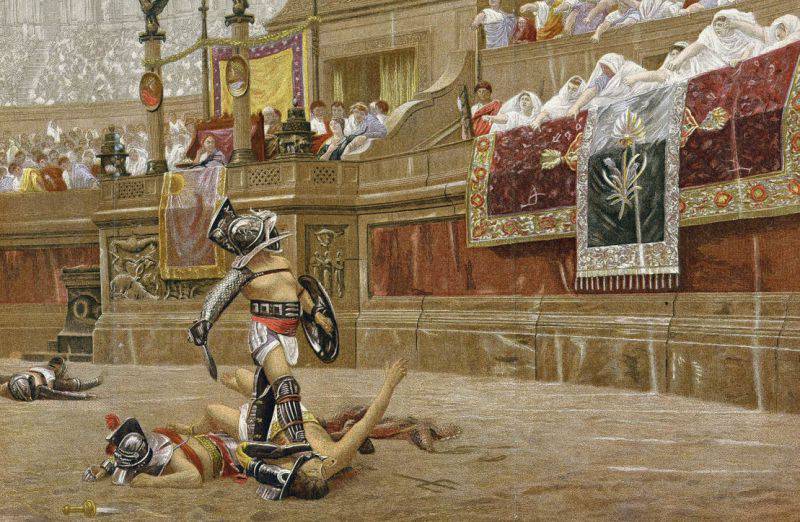 The existence in ancient Rome of the phenomenon of gladiature is widely known. Moreover, this phenomenon is surrounded by such a significant number of myths that historical facts are already difficult to distinguish from outright fiction. Let's try to deal with the main issue that has been subjected to the most serious mythologization, the issue of the inevitable death of a gladiator in the arena.


First of all, I want to note that this material is not exhaustive on this topic, and therefore the complaints that begin with the phrase “the author forgot to mention ...” or “the author is an amateur, he did not talk about ...” I consider in this case to lie outside the research topic .

The statement of the question is as follows: coming to the people, did the gladiator sign the death sentence for himself? Are all gladiators suicide bombers?

In fact, those who believe in this myth do not fully understand the essence of the gladiatorial phenomenon. Do not confuse two things: directly those who were called gladiators, and those who went armed to the arena. Besides the gladiators themselves, the arena with weapons There were at least 3 categories of citizens.

The first is criminals sentenced to death. The Romans, we note, were lovers and connoisseurs of the show, and therefore they approached the executions creatively and with an appropriate spectacular scope. It was a semi-literate crowd in medieval Europe who liked to stare at the banal chopping off of heads and other body parts that were unnecessary from the point of view of medieval justice, while in Rome aesthetic demands were much higher. Of executions, a real performance was arranged, in which, of course, gladiators participated as executioners. Those sentenced to death were given quite functional weapons (rather than blunted counterparts - more on that later), and in the case when the show's scenario provided for an element of reconstruction of any battle - and armor identical (or even authentic) to the armor of soldiers of a certain side. For example, a group of convicts could be dressed as “Celts”, and professional gladiators - Roman legionnaires, and arrange a large-scale reconstruction of the battle with these same Celts, of which there are more than a dozen battles in Roman history. Naturally, those sentenced to death had insignificant chances of victory: the gladiator is a trained combat professional, and the criminal is just a criminal. Sometimes, however, it also happened that spectators particularly distinguished themselves in providing quality spectacles for spectators.

The second category of citizens are those who, not being a professional gladiator, expressed a desire to take part in the Games. The profession of gladiator, of course, was not considered particularly respected, but it was more of an official position (attitude to the gladiators in Rome can be compared with the attitude to the buffoon in Ancient Russia after the adoption of Christianity), but gladiators enjoyed a very high popularity among the public. In addition, this profession has always enveloped a certain romantic aura, and sometimes it would be desirable to take a sip of adrenaline to snickering Quirites. And if a quirite eager for adrenaline and finances was strained - then Arena kindly opened its gates for him: not only could he count on a certain prize from the organizer of the Games, so also, according to custom, the gladiator-winner could take everything that the audience threw on the Arena during (and after) the battle, and sometimes a popular rain of small coins thrown by the handfuls of people thrown at the popular or successful gladiator. There are cases when quite noble persons went out to the Arena and even emperors (some copies of whom liked to show their outstanding physical and fighting qualities to their subjects - of course, not for the sake of small coins, but for raising ratings for). The main difference between this category of citizens and professional gladiators is not so much the lack of professional gladiator training (many of them didn’t give in to the gladiator’s training), and status — again, traditionally, gladiators legally belonged (slaves) to the respective lanistas, while the indicated citizens not.

Interestingly, the scale of this phenomenon - free citizens entering the Arena in order to tickle their nerves and fill the wallet, as well as show off in front of the audience - was so wide that edicts were issued from time to time prohibiting, for example, the participation of women from the patrician class in the Games. I repeat, not any persons of the patrician class; not any women; namely, women of the patrician class — that is, with the participation of simply free women and simply patricians, they have long been reconciled. By the way, the aforementioned edict was published several times, which suggests that it was not really followed up (I had to remind).

If the first two categories of citizens in the Arena risked their lives and health (in varying degrees, of course), the third category was practically not risking. This category is rarely mentioned, but without it the Games are not possible. This is the staff of the Arena, whose functions included the security of the Games. For example, if someone from the sentenced criminals suddenly comes into the head to throw a dart at the audience, then the organizer of the Games will be somehow embarrassing. Therefore, sometimes there are references to some sagittarius'ah, standing with strained bows in the stands and vigilantly watching the progress of the bout.

So, in all, there were 4 different categories of citizens participating in the Games; they all risked to varying degrees.

Professional gladiator, for a moment - product piece. Not any slave is good enough to get to the lanista. Frank zadokhlik gladiator will not. Yes, and a suitable slave is trained in a ludus, for a second, for THREE years. That is, three years to feed him, put on shoes, teach ... so that he died in the first battle? No need to consider a lanist idiots, they are fully aware of their gesheft and their sources.

It is for this reason that if the Games were organized by ONE lanisty, the gladiators did not fight with stupid but very dull weapons, and clearly knew HOW to strike so that the external bleeding was, and the opponent had no serious injury. It is difficult to say whether the battles were then completely staged, but, most likely, it was a kind of modern wrestling - it looks impressive, but in fact all movements are known to both sides in advance. The wolves are fed, the sheep are safe, the shepherd counts the profits.

By the way, a number of types of gladiator weapons were also “sharpened” exclusively for showiness, but not for effectiveness. For example, the weapon of the gladiator-skissor: a forked short blade is a weapon capable of inflicting only shallow cuts. Blood sea, but to the serious internal organs with all the desire will not reach.

Since a good gladiator brought a good income to the lanista, then to his gladiator, services were such things that often did not dreamed of an ordinary poor Roman. For example, all the achievements of the then Roman medicine. In particular, there is information about the found remains of a gladiator whose bones have traces of a pin operation. Complex surgical operations, I recall, were unknown in medieval Europe, and in the more culturally developed Ancient Rome they were not widely practiced either. Despite all the advancement (for its time) of Roman medicine, the Romans could not stop internal bleeding - it was from them that most of the gladiators died.
As for the gladiators defeated in a fight. Some mistakenly believe that they were definitely waiting for death, or that victory in the battle of gladiators can be achieved solely by the death of the enemy. Let’s disappoint some: the most productive gladiator about whom the records remained, the Syrian Flamm, lost several bouts at different times, which did not prevent him from continuing his career; at the same time Flamma FOURTHIES refused the offer not to perform more at the Games. True, he died in a battle in the Arena - but, apparently, it was precisely to this that he purposefully strove.

The death of a gladiator (namely a professional gladiator, and not a sentenced criminal) in the battle in the Arena was considered an accident rather than a commonplace.

The coaching staff of the Ludus was formed, by the way, from among the gladiators themselves (most often, the rudians, that is, those who were given a wooden sword as a sign that he can now decide whether to participate in the Games or not) it already says that many gladiators lived to their retirement. Speaking of rudiarias: they often received from the lanistas and the Phrygian cap (sign of slave liberation), but this cap was not particularly pleasing to them: this meant that legally he was now free, and therefore the lanista was not obliged to contain it. Like, get, free citizen of Rome, the means of living now himself - you are no longer a slave. Most often, the "fooled" rudiarii were hired to the same lanista - but now for the salary that the lanista himself set (sometimes to his advantage, since it would be more expensive to maintain the same rudiary as a slave).

In general, it can be said that the Roman gladiator is a professional extreme sport rather than a cruel custom. Despite the fact that the main body of athletes were specially trained slaves (all for the sake of entertainment!), Almost any citizen of Rome could take part in the Games. The guaranteed death in the Arena waited only for those sentenced to it, and not at all to professional gladiators, who pathetically greet the crowd with a cry “Going to death salute you!”

Ctrl Enter
Noticed oshЫbku Highlight text and press. Ctrl + Enter
We are
"Slave Wars." The uprising led by Spartak (part three).Washington Gladiators: The Gladio Plan - A Secret Network of Anti-Communism and Russophobia
99 comments
Information
Dear reader, to leave comments on the publication, you must to register.