Reducing the US defense budget: Europe will pay for the "Russian threat"

January 29 2016
46
The “defense” budget of the United States in the new fiscal year could reach 580 billion dollars. For comparison, the US military budget for the 2016-th fiscal year was 612 billion. The latest amendments to the planned budget, 2017, deprived the military of 15 billions. At the same time, the Pentagon insists on increasing its military spending by its allies - the states of the European Union. The need to build up "defense" spending is justified in the updated version of the defense strategy in Europe: in this document Russia is called the main threat along with terrorism. 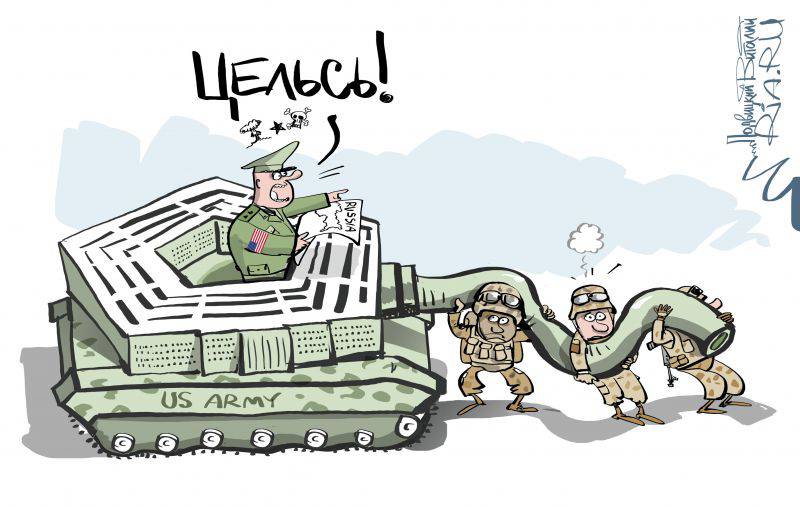 Recall that the defense budget adopted by the US Congress for the 2016 fiscal year provided for expenditures in the amount of 612 billions of dollars. As noted in October 2015 "Vesti"The document allows Washington to actually violate the Treaty on the Elimination of Intermediate-Range and Shorter-Range Missiles: if 120 days after the budget was signed, Moscow does not comply with the treaty, then the Pentagon will receive the right to retaliate.

In the next fiscal year (2017), the US defense budget could amount to 580 billion dollars, RIA News" with reference to the Reuters agency.

It is assumed that this amount of "defense" expenditures will be announced in the budget proposal of Barack Obama.

“This is $ 15 billion less than the Pentagon originally planned. This will lead to the reduction of some large armory programs ", - quotes the message" Reuters "RIA"News».

Let's go back two weeks ago.

As 14 wrote January 2016 g. Newspaper "Sight", Republican congressmen expressed a desire to include funds for countering Russia in the US defense budget for the 2017 fiscal year. This was stated by the chairman of the House Armed Forces House Committee, Mack Thornberry.

According to him, despite the economic difficulties, Russia continues to expand its defense capabilities, sometimes surpassing the United States technologically. “They make defense their priority,” Mr. Thornberry explained.

“Tactical use, where your planes are going, where your ships are heading, is a question for the military and for the commander in chief. But the funds needed to respond to Russia's actions are our concern, ”he added. And he declared the need to counteract the “threats”: “The draft defense budget will include provisions, and we will also continue to develop our capabilities with the goal of not necessarily complying with them (the Russians), but in order to get the tools to counter the threats.” It was meant, of course, "threats" from Moscow.

It is difficult to say what the Republicans will achieve when it comes to the planned reduction of "defense" expenditures on 15 billions. On the other hand, it is clear that the thesis about the “threat” from Russia is already officially being tested by the Pentagon on Mother Europe.

“The US military presented an updated version of the defense strategy in Europe, in which Russia was called the main threat along with terrorism,” writes Yevgeny Medvedev in Nezavisimaya Gazeta. - This is a signal to European partners that they will have to take on a substantial part of the cost of the army. Moreover, the Pentagon’s budget for 2017 was cut by $ 15 billion by the year. ”

According to the European Command of the United States Armed Forces (EUCOM), 2015 was one of the most intense years since the Cold War. The strategy names 6 priority areas for the next 3-5 years: 1) warning of Russian aggression; 2) interaction with NATO members; 3) preserving US strategic partnerships; 4) counteracting and accounting for transnational threats; 5) ensuring the combat readiness of the armed forces; 6) focus on key objectives.

As we see, the “warning of Russian aggression” comes first.

The authors of the document believe that Russia is “building up aggressive behavior” in Eastern Europe and is engaged in the militarization of the Arctic. “Our command has done outstanding work, focusing equally on revanchist Russia, mass migration and terrorists,” the American commander-in-chief of the Joint NATO Forces in Europe quoted American General Philip Bridlav quoting NG.

The updated strategy is designed to become a “compass” for the military and will allow at the state level to enlist resources to ensure “unity, freedom, peace and prosperity in Europe”.

“In the United States, there has been a political reassessment of the challenges and threats that are observed in the West,” Dmitry Danilov, head of the European Security Department at the Institute of Europe, RAS, told Nezavisimaya Gazeta journalist. - In this regard, it is completely clear that the strategy of NATO is being brought under US installations, and after the adoption of the Wales Declaration and the restructuring of the armed forces under the American patterns, nothing new was expected. The fact that it was published in military documents is a statement of reality. In addition, this is the US response to the successful Russian military-technical modernization. ”

“Words about countering the Russian threat are a signal to Europeans that they should bear a share of responsibility for the fact that the United States is reconfiguring its activity. In recent years, the Pentagon has demonstrated a constant desire to achieve the allocation of large funds for defense. Pressure on Europe will increase, ”Danilov told the publication.

Russia has already responded to the updated strategy. TVC reports that the Permanent Representative of Russia to NATO Alexander Grushko condemned the strategic document.

The channel cites the opinions of a number of experts.

“The fact that in their language is called“ deterrence of Russian aggression ”, in fact, means their aggressive advance to the east. Look, over the 25 years from the German border, they advanced almost to the Rostov, Belgorod and Voronezh regions. That is where the real aggression is, ”said State Duma Deputy Mikhail Yemelyanov.

“In practical terms, this will be expressed in the fact that the US will try to create new bases in those states that were not previously under the control of America,” said Konstantin Sivkov, first vice president of the Academy of Geopolitical Problems. “We should expect the emergence of US bases in Georgia, more large-scale, they will seek from Azerbaijan to accept the American military on its territory.”

Summing up, we note that the United States, which is planning to reduce its military spending, does not intend to abandon its strategy to contain "revanchist" Russia. Americans will shift part of the “defense” expenditures to Europe, which is obliged to resist the “Russian aggression”. No wonder Russia is put on the first place in the list of enemies of the West on the pages of the updated strategy. We should expect further active propaganda in the spirit of “the occupation of the steppes of independent Ukraine by Putin’s army”. Europe will have to prepare for a new headache: in difficult years, when hordes of migrants arrive in the EU countries, which have nothing to support, Washington will force its vassals to fork out for an arms race.

Observed and commented on Oleg Chuvakin
- especially for topwar.ru
Ctrl Enter
Noticed oshЫbku Highlight text and press. Ctrl + Enter
We are
Projection of forceThe Pentagon intends to preserve the power of the US Army
46 comments
Information
Dear reader, to leave comments on the publication, you must to register.