January 30 2016
16
Prior to the legendary reforms of King Shaki, the Zulus, according to the oral tradition, fought as well as their neighbors - for the battle, the parties met at a predetermined location and were shot by light throwing spears, defending themselves with oval shields; During the fight, numerous battles of the bravest warriors took place, and old men and women watched the battle from the rear. Losses in such clashes were small, and in the evening one of the parties, having admitted defeat, asked for peace and promised to pay tribute. The coming to power in 1816 of Shaki kaSenzangahons (literally Shaka Senangahonovich) radically changed the military of the Zulus. 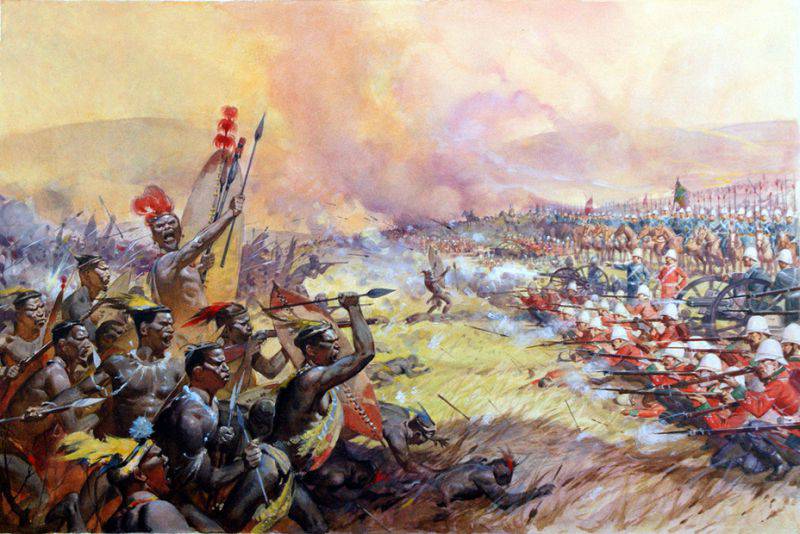 Organization of the Zulu army

Shaka found that after reaching 18-19 for years, all Zulu youths were called up for royal military service. Recruits formed a regiment (or poured into an existing one), which was given the name and uniform was appointed (mainly consisting of the special color of the shields and various combinations of ceremonial feathers and furs). Then recruits built regimental barracks and underwent military training. The warriors remained at the disposal of the king until their marriage, after which they passed into the category of reservists who were called up during the war. The permission to marry was issued personally by the king to the whole regiments at once, so that the regiment left the service in full force. Naturally, the king sought to keep the soldiers in the service as long as possible, and the men, on average, married closer to forty years. In Zulus, as in any society, there were people who evaded service, as life in the army was often associated with a half-starved existence and constant stick fights with fellow workers and rival regiments, and such fights sometimes turned into a real stabbing (for example, two court regiments used assegai during the clash between themselves and about 70 people were killed). Such "refuseniks" either went to Natal, who was under the authority of whites, or became non-conscripted shamans. The Zulu regiment (approx. 1000 people) was divided into battalions (senior and junior), battalions into divisions, divisions into companies, and companies into divisions. For example, in the unusually numerous regiment of the Handempuva (“Black and White Head”) on the eve of the Anglo-Zulu war there were 49 companies in the 12 divisions. The senior officers of the regiment were the colonel, the lieutenant colonel and the majors.

The shield of the Zulus, introduced at Shack, was made of cowhide and was about the height of about 1,3 m, and a width of about 60, see. Later in the spread of firearms weapons the shields became lighter and smaller, however, the old-style shields continued to be used. The military shields of all the regiments belonged personally to the king and were stored in special warehouses.

The main offensive weapon of the Zulus was a spear. Shake is credited with radical reform in this area - as the Zulus transmitted. "Shaka said that the old custom of throwing assegaevs was bad and caused cowardice ..." Now the Zulus were armed with assembly with a long wide tip about 45 cm long and a short shaft about 75 cm. Reached to us Assegaev finds have smaller tips, however, photographs and eyewitness accounts confirm that Shaka assegais were similar to those described above.

In connection with the appearance of armed with white guns, the heirs of Shaki returned throwing spears to the soldiers, which allowed them to fight at a distance, but the main weapon was a piercing spear. For throwing, the Zulus used mainly a dart with a tip about 25 cm long and a shaft up to 90 cm long, which could be thrown a distance to 45 meters, but the effective throw range did not exceed 25-30 meters.

In addition to copies, the Zulus were armed with wooden clubs up to 60 (see length). Also high-ranking Zulus wore battle axes, which were both ceremonial weapons and combat weapons.

As trade with whites increased, more and more firearms began to flow into the country, and by the time of the war with the British in 1879, many Zulus were armed with muskets. Muskets were, of course, old samples, for example, smooth-bore "Brown Bess", besides the quality of gunpowder and bullets left much to be desired. Among the Zulus there were very few good shooters, and most of them barely able to aim, so even the capture of 1000 modern British rifles under Isandlwana did not greatly enhance the firing capabilities of the Zulu army. One of the British said that the Zulus, seeing how the Europeans, when firing at long distances, raised the aiming bar, decided that this increased the power of the gun and always fired with the planks raised. As a result, in the decisive battle of Ulundi, the British, despite the fact that they were built on a dense square, lost only a half dozen people from the Zulus fire and were wounded before the 80.

At the time of Shaki, soldiers were forbidden to wear darts or to throw the assegai - the king demanded to attack quickly in close formation and converge with the enemy hand to hand. Once, Shaka conducted an experiment: dividing the warriors into two parts, he, besides the shields, gave the soldiers one half several throwing sticks, and the other half fired one stick representing a piercing spear; then the king ordered the warriors to fight each other, and the warriors with "spears", who threw themselves into a hand-to-hand fight, quickly defeated their opponents. Interestingly, in exactly the same way in Cyropedia of Xenophon, Cyrus proved to his soldiers the superiority of cold arms over throwing projectiles.

Beginning with the 7 summer age, the Zulu joined the ancient tradition of fights on sticks, which were fought "before the first blood on the head," after such a fight, the rivals tied up wounds to each other, showing that they had no hostility towards each other. At a more mature age, the young men were taught military dances with a shield and a spear, which were both group and single "shadow fighting", often such dances ended in real battles on sticks. After joining the army, the Zulu recruit was trained in the basic skills of handling assembly and combat shield, sometimes exercises were held in which one regiment attacked another, and the soldiers practiced using the shield and spear directly in a mass fight.

Constant clashes between rival regiments also served for the physical and psychological preparation of the fighters (the use of assembly units in such fights was prohibited and the soldiers were armed with shields and sticks). As soon as a fight broke out, the officers encouraged their soldiers, beating the rhythm with sticks on their shields; the battle continued until the officers commanded "Enough!" and did not disperse the soldiers.

To maintain discipline, every Zulu officer wore a stick, which he did not hesitate to use to achieve obedience.

The favorite building of the Zulus was "bull horns", consisting of 4 units. The “chest” moved straight at the enemy, two “horns” tried to surround the enemy and attack from the flanks, the squad of “lions” stood in reserve. Also in the reserve were often the youngest, newly formed regiments, which were used only for pursuit and collection of booty.

The attack against the British armed with breech rifles was as follows: “Dark masses of people in an open line, following each other in quick succession with excellent discipline, ran smoothly through high grass. Most of the Zulus were lined up in front of our front. in three lines in groups of five to ten and moved towards us ... they continued their advance at a run until they were at a distance of about 800 yards, then they opened fire. Despite tense moment, we could not fail to appreciate the excellent order in which the Zulus skirmishers acted in. A group of five or six warriors jumped up and rushed forward through the tall grass, winding left and right, bending their heads and holding shields and rifles below, out of sight. Then they suddenly fell into the grass, and nothing but clouds of smoke betrayed their presence, after which they advanced again ... "The English traveler in 1882 asked a group of Zulu veterans to demonstrate the final phase of their attack:" They ... and for my entertainment several maneuvers, showing why their attacks were so dangerous for our troops. They rushed forward about 50 yards from the enemy and, imitating the sound of a volley, fell into the grass; then, when the fire supposedly weakened, they jumped up and, like lightning, rushed at an imaginary enemy with assegai and shields in their hands, shouting "Usutu" ... "

Before the collision, the Zulus showered the enemy with throwing spears (one of the English recalled that during the attack of the Zulus “Issegai rained hail” under Isandlvana) or they fired from the muskets. The Zulu veteran said that he "... shot once from ... a rifle and shifted it into a hand with a shield, grabbing assembly, - we usually fired once, and then attacked, because it took too long to load." Shaka himself spoke about the theoretical actions of his warriors against the whites — during the reloading of the white muskets, his soldiers would rush into hand-to-hand combat, and the whites, who do not have shields, throw their guns and will be forced to flee.

Zulus Mangwanan once remarked that "if a man is a man, he fights hand to hand." When it came to hand-to-hand fighting, the Zulus pushed their enemies with shields and stabbed with the assegai. During the battle of Isandlwana, as one of the participants recalled, "we got dark in the eyes and we pricked everything that came our way ...". The Zulu warrior told me about his duel with an English soldier: “I rushed at the soldier who pierced my shield with a bayonet and, while he tried to pull him out, stabbed him in the shoulder. He threw the rifle, seized me by the neck and crushed under me. sparks shook from his eyes, and I almost choked when I still managed to grab my spear sticking out of his shoulder and pierced him so that he rolled off my lifeless one ... ". “In the last fight, butts and stones were used (by the English), since the soldiers had no more bullets ...” said another Zulus. Humbek Gwabe recalled how an English officer shot him with a revolver, and he dealt such a blow to the assembly, that the tip went out between the ribs. Two other officers were killed while defending themselves, standing back to back, one was shot, and the second was slain by a Zulu colonel. One sailor, with his back pressed to the cart, fought back with his saber, until he was approached from behind and was stabbed from under the cart. The final stage of the fight resembled a crowd, Sophikasho Dungu said that under Isandlwana the field was covered with a stirring mass of people "... I noticed that several soldiers were shooting at me from behind ... I would be happy to attack them, but I could not reach them ..."

After the battle, the Zulu army immediately went home to perform cleansing rites, and even the royal will could not prevent it.

Ctrl Enter
Noticed oshЫbku Highlight text and press. Ctrl + Enter
We are
22 June. Brest Fortress. Battle ReconstructionBattle of Izandlwane and the role of the pouch
16 comments
Information
Dear reader, to leave comments on the publication, you must to register.