Attempt of “decommunization” failed in Donetsk 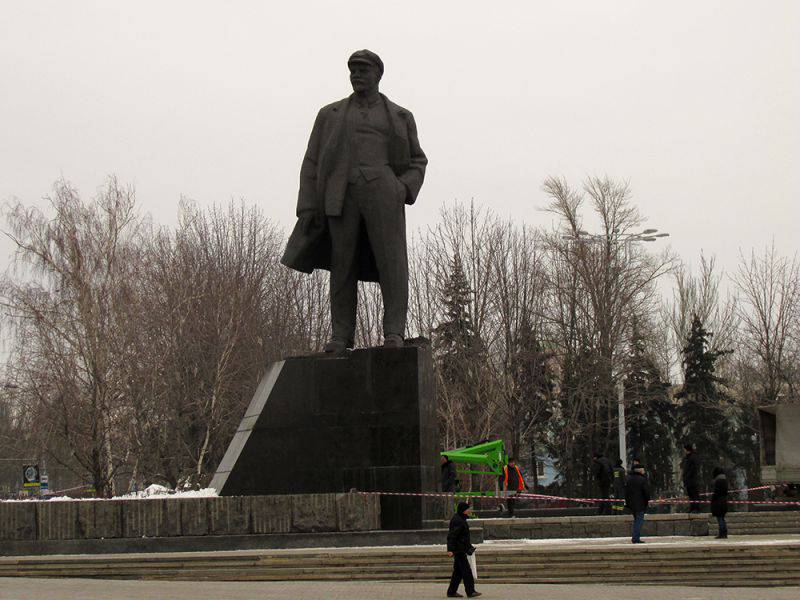 On the night of January 27, around 3: 50, many residents of the center of Donetsk woke up from a loud explosion. Of course, the front-line city is not surprised by such menacing sounds, and in Kiev and Kuibyshev districts in general there are rarely a day without an ominous roar. But to thunder right in the center - it is still not such an ordinary phenomenon. In addition, it was not similar to the arrival of a projectile. It turned out - the act of sabotage.

The crime was directed against the 7,5-meter monument to VI Lenin, standing in the very heart of Donetsk - on the square bearing the name of the leader. This monument was erected in 1967, in honor of the 50th anniversary of the Great October Socialist Revolution.

The blast was loud enough. It was heard not only in the center, but also for several kilometers. But the result was not at all what the organizers of the terrorist act expected. Monument survived. In the Soviet years, everything was created conscientiously. Were damaged shoe statue of Lenin and a pedestal. Moreover, glass was cracked in several houses. It can be said that the notorious “decommunization” failed. 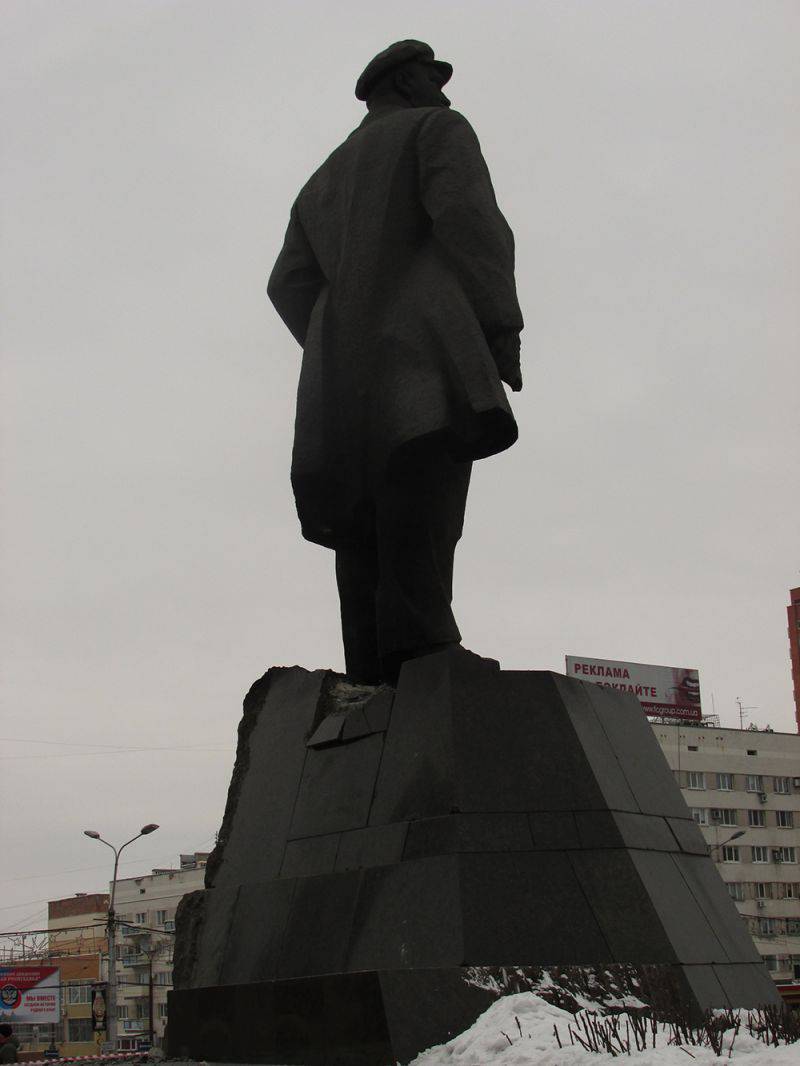 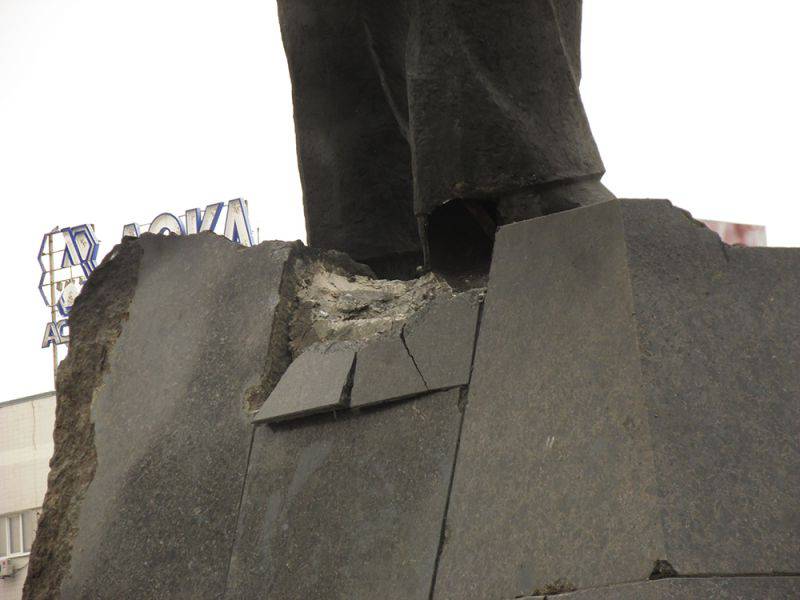 Monument to Lenin was one of the symbols of the “Russian Spring” 2014 of the year. Its participants assess the importance of one or another episode in different ways. Someone says that the main thing was the seizure of the regional administration building, for someone the struggle for the liberation of the people's governor Pavel Gubarev was particularly important, and there are those for whom protection of the monument to Lenin from visiting militants of the Right Sector gained great importance.

In turn, the pravoseki also gave considerable meaning to the struggle against the monuments of the leader. With some frenzy, the thrashing fellows fought with them in Kiev, Kharkov and other cities! The overthrow of the largest monument was considered almost equal to the seizure of the entire city. This was partly true, because it was not just acts of vandalism, but also a demonstration of victory over the inhabitants of these cities. Low victory over unarmed people. It is no secret that the destruction of monuments was often accompanied by brutal beatings of those who dared to go out and resist the vandals.

And, of course, one of the tasks of the neo-fascists was the reprisal of the monument to V.I. Lenin in Donetsk, and at the same time - at people who did not want to give unleashed hooligans the opportunity to act with impunity. Then it failed. And the struggle for this symbol rallied many people who later took an active part in further events.

Now, when the situation has changed, when the People's Republics are not just created, but they also manage to develop quite successfully, the supporters of Ukrohunts are fighting against them with the help of terrorist acts and sabotage. And an attempt to destroy the monument, about which pravoseki once “broke off his teeth” is one of the acts of this vile struggle.

The place of the attack was examined by the investigators. Found traces of improvised explosive devices. Surveillance cameras recorded two men who were selected to the monument.

The head of the administration of the Head of the DPR, Alexander Zakharchenko, Maksim Leschenko, strongly condemned the terrorist act. “Fighting the past, with one’s own heritage, with history - this is a disease. We will not allow the penetration of this virus by Ukraine. These are consequences of the imposition of an ideology that is unacceptable to us. They cannot defeat us and try to defeat monuments, ”he said.

You can have a different attitude to the personality of Ilyich, but it is no coincidence that supporters of ukrofashism organized “Leninopad” throughout Ukraine. The ideological heirs of the bloody Bandera were thus belatedly avenged by the Communists and the entire Soviet people for the defeat of fascism in the 1945 year, as well as for the fact that in the following years the Bandera gangs were also defeated.

Annoying Pravosekov and another: the fact that Lenin was one of the symbols of the state in which both Russians, Ukrainians, Belarusians, and Uzbeks, and many other nations lived and built together.

There are people among patriots who have a negative attitude towards Lenin. It is their right, but you still need to think: why is rabid Russophobia so often intertwined with riotous anti-communism? Is it not because the attacks directed against the whole of the Soviet are not really directed simply against symbols? And against the Russian people in general. Against the people, in the history of which were the Great October Socialist Revolution, and the Great Victory over fascism, and the construction of a powerful Soviet state. All this is an integral part of the story. Throw it out - and throw out the soul of the people ...

Is it a coincidence that the day that began with the undermining of the monument was also marked by fierce attacks on the northern and western outskirts of Donetsk? In the areas of the Airport, Spartak, and Volvo-Center it was “hot” - there had been no shelling of such intensity for a long time.

A week earlier, on January 21, the news came that in Kiev authorities plan to spoil the appearance of one of the huge monuments - the statue of the Motherland, which stands on the banks of the Dnieper. From her shield they want to remove the emblem of the Soviet Union.

This majestic monument is located on the territory of the museum dedicated to the victory in the Great Patriotic War. The winner was the USSR and it is quite logical that on the shield of the Motherland is the emblem of the winning country. For those who are trying to rewrite history, there is nothing sacred. “Decommunization” comes from above, mercilessly tormenting the souls of the veterans who mined the Victory.

But Donetsk is not Kiev. Here the act of this very “decommunization” was shameful from the very beginning, was carried out under the cover of night and failed foolishly. On the same day, restoration work began, so very soon there will not be a trace of this clumsy terrorist act. 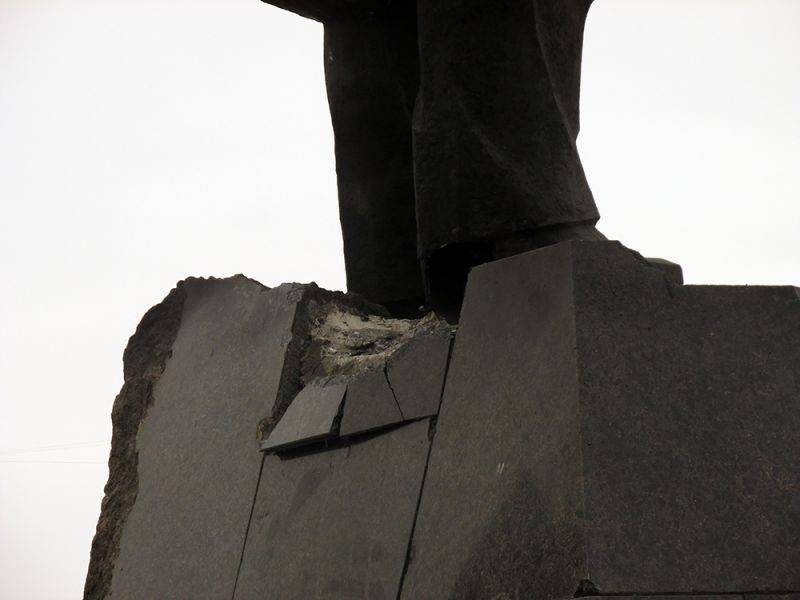 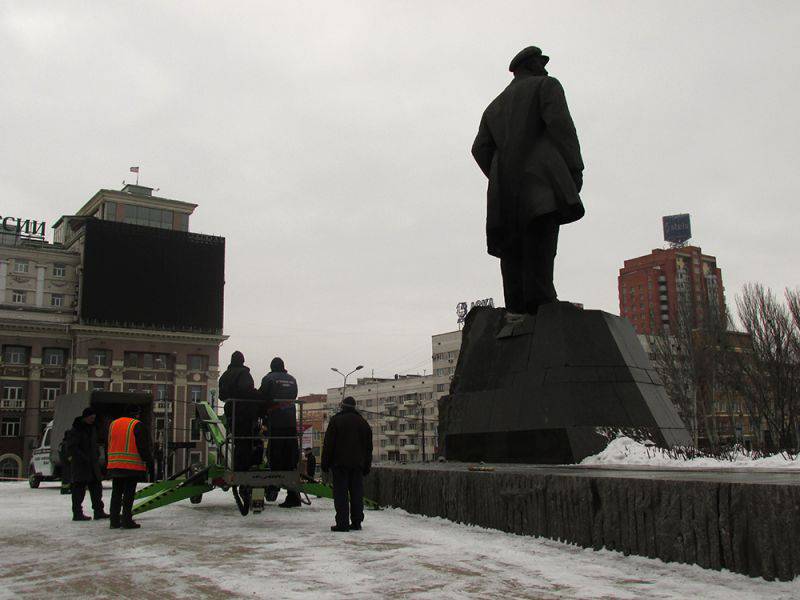 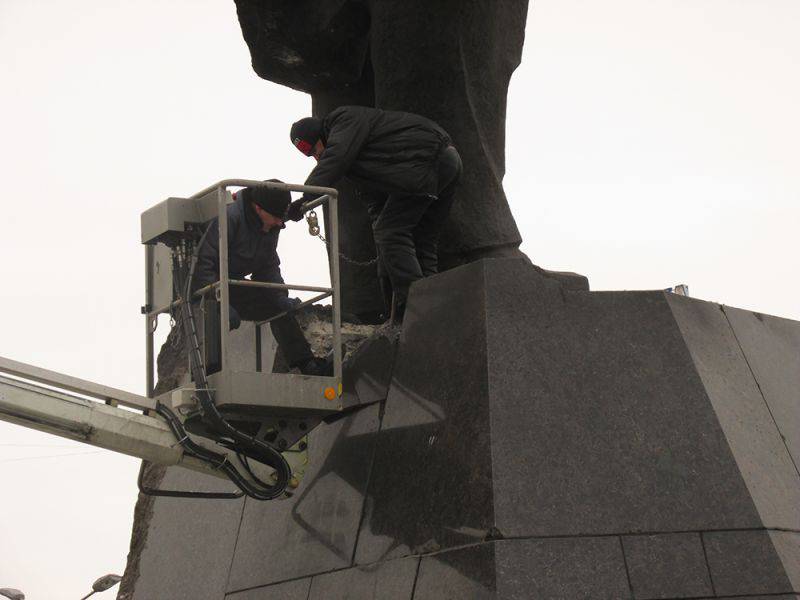 Ctrl Enter
Noticed oshЫbku Highlight text and press. Ctrl + Enter
We are
Air parade in honor of Queen Elizabeth II's Queen's 90 anniversaryIn Donetsk, a monument to Uncle Vasya was installed, and the ukrokrateli “congratulated” the Donbass on the Day of Metallurg
31 comment
Information
Dear reader, to leave comments on the publication, you must to register.