Is there a way out of the trap? On constitutional reform in Ukraine

January 28 2016
52
Tired of war, Ukraine. Tired of Ukraine, Russia. Tired of the European Union of Ukraine. Even spit on US European affairs in anticipation of their own elections. That is the reality today. A lot of problems at all. Plus the global global crisis. Not to Ukrainian dances. 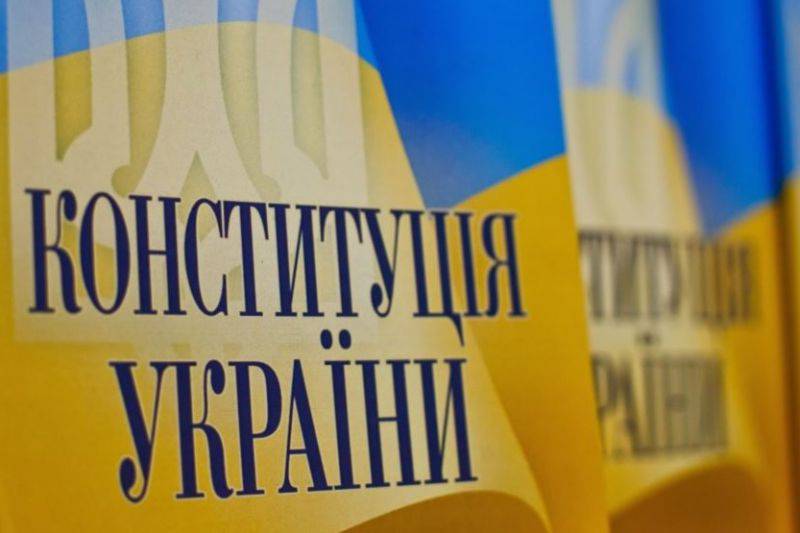 Ukrainians are increasingly talking about the "plum" of the country by opponents and allies. Now Merkel, Cameron, and even Obama are already in the camp of the enemies of Ukraine. Just because they start asking about real things. Talk, of course, well. But the money that goes to Ukraine is real. Where are the real cases?

The most important thing that politicians are talking about today is the adoption by Ukraine of amendments to the constitution. This should happen literally now. More precisely, before the end of the session Rada. Until 2 February. And everyone already understands the delusional nature of this assumption. It is clear - to accept such changes will not work. Why?

Let's consider the options. There are not many of them. What for Ukraine and the authorities can end any of the decisions?

The most optimistic from the point of view of the West and some of the Ukrainian politicians is the option of making changes. That is Rada in recent days still goes to an agreement with Poroshenko. There is no time to consider the changes and they are accepted in the form that the presidential administration presented.

It seems to be all. The constitution can be changed, everyone got theirs. Special status for Donbass adopted. Is it all?

According to the Minsk agreements, the changes must be coordinated with LDNR. It is agreed. And where is the agreement? He simply does not. And what does that mean? This means that all efforts were in vain. Parties to the conflict do not recognize this as the fulfillment of the agreement. And they will be right.

And then both sides get a legally justified opportunity to start another exacerbation. Again the war. Again the blood. Only in the new conditions, already in the new format.

It is doubtful that Russia or the United States in this case will be able to stop those they support. "Felling" will start much more serious.

Considered option, to be honest, from a series of unscientific fiction. The present Rada is simply not able to adequately address issues. It seems to me that the deputies, even on the edge of the abyss, will not be able to decide whether or not to press the brake. So go to this very abyss. So go to the most likely.

This option is simple. Voting will fail. This is said by many, including Ukrainian, political scientists. The presidential project fails to garner 300 votes. Even the administrative resource does not work. You can say the reasons for this position of deputies, but this is not the topic of today's article. The main thing is fact.

The failure of the vote automatically transfers, according to the regulations, this very vote for a year. Rada puts Ukraine in a position of neither peace nor war. Another year.

This position will mean the actual recognition of the country as non-negotiable. And not only by Russia, but also by other members of the contact group on Donbass. Yes, and Poroshenko actually lose this status. How can you talk about something with the president if his words are worthless?

Under these conditions, the LDNR will simply be forced to continue the formation of their own statehood. It is statehood. In particular, it seems to me that elections of the parliament and heads of republics will be held. Moreover, taking into account past experience, the elections will be "European". With the participation of observers from the EU, and maybe the UN.

And then we get a government that is legitimate from the point of view of international law and the presidents of these republics. So what is next? Next is a full-fledged subject of negotiations already under the auspices of the UN. In fact, we get new states on the world map.

And, at least, in the rank of Abkhazia or Transnistria. But not "temporarily occupied" territory by terrorists.

And what, in this case, expects what remains of Ukraine? Here the picture is not at all bright. Ukraine faces a political and economic crisis. Even a crash is possible. And such a crisis is no match for today.

In politics - breaking the current power system. Deputies will move from faction to faction. Parties to create and destroy alliances. Not because there will be such a desire. This is the logic of the survival of politicians at the peak. Or you populist and have "your" layer of voters. Or the road to your political non-existence. Look at how quickly society “forgot” such a colorful figure as Yarosh.

It will be the same with officials. Already today we read in social networks that we need to change many. Practically those who are satisfied with the Ukrainians, no more. "All on Gilyak" and at all levels.

What will the officials do in this case? Will they be able to carry out at least some reforms? I think the reader has already answered this question. Reforms always cause rejection of a certain part of the population. A protest that can spill over into anything. Risks the prime minister (anyone, not only Yatsenyuk) to hold them? It is doubtful.

And further. No reforms - no loans. The position of the EU and the IMF is clear. This is in the face of the complete collapse of its own economy, the death of the country. No longer talk of death, but real death. All social programs will fly to hell. The population will turn into opponents of everyone and everything.

What Ukrainian politicians have done with the Ukrainian economy becomes the very guillotine that will “shorten” many of them to their heads.

There is another option that is acceptable for Kiev. Namely - postponing the vote. A variant that is more and more often spoken about in the West today. They say so much that it creates a feeling about the "Western roots" of this decision.

The bottom line is simple. Understanding the impossibility of getting approval now, the government is “delaying” the process for the next session. For this today, frantically looking for loopholes in the legislation, regulations, anywhere, for such a decision. I think they will find a loophole.

In this case, for a period of time, Ukraine still has a chance to get loans. For some handouts from the West. And the crisis will be mothballed. There will be time for the next search for a solution. So what? Never mind. Preservation is not a solution, even the opposite. This is a deepening of contradictions.

And the reaction of Russia in this case will be different. Poroshenko and his curators are counting on the calmness of the Kremlin. On the "contemplative pose" Putin. Is it worth it? It seems to me not worth it. The negotiators, the "talkers," have too angry the Russian president. It's time to answer for your words. Everybody. And Russia, and Ukraine, and the United States, and the EU.

It seems to me that Ukraine will have to respond with the loss of some other part of the territory. At least, to the borders of Lugansk and Donetsk regions. Keep the army LDNR from the onset of Russia will not.

And finally, the most likely option from my point of view.

The position of all in the negotiations in Minsk is clear. Unconditional implementation of the Minsk agreements. True, in fact these agreements, many contradictions. West pretends not to notice the fraud in Kiev. European politicians are trying to slip instead of the existing agreements surrogates from some interpretations. For example - talking about border control.

Then comes the "epiphany". In the contact group "suddenly" read the agreement. Literally read. And Kiev will point to the discrepancy between interpretations and written. Kiev recognizes its "myopia" and will assure everyone that it is ready to perform. Perform exactly as recorded. The points.

And begins the classic process of political "burden". National discussion. Debate in Parliament. Consultations in the EU and the UN. Coordination and negotiations. And all this against the background of continued financing of the Ukrainian revolution of the IMF and the countries of creditors.

Poroshenko ratings stabilize. The people will start to believe that it is he who decides something. The government is finishing work on the destruction of the economy of Ukraine. A curtain!

I admit even the implementation of constitutional reform, after some time. This is more than likely. Only this reform will turn from a solution to today's problems into a nail into the lid of the coffin of Ukraine. Constitutional reform will be the final stage of the legal destruction of the state. Beautifully designed destruction of a single country.

No one will give guarantees of integrity during this reform. A federation, and even more so a confederation, may well end in a “scattering” of territories.

And at the same time, constitutional reform will push everyone else. A sort of snowball that rolls somewhere. I do not want to say - into the abyss. Just do not know the final point. Yes, no one can know this. But this point is clearly different from the point of departure.

There is exactly one week left until the time when we will see which of the proposed scenarios will be implemented. Just a week. Seven days. We wait.

Ctrl Enter
Noticed oshЫbku Highlight text and press. Ctrl + Enter
We are
Results of the week. "And let's weigh on brotherhood"Results of the week. "This is not for you ..."
52 comments
Information
Dear reader, to leave comments on the publication, you must to register.