February 3 2016
26
In the second half of the thirties of the last century, several self-loading and automatic rifles of new types were adopted by the Red Army. The first was ABC-36 designer S.G. Simonova, adopted in 1936 year. it weapon had a number of characteristic flaws, because of which the development of self-loading and automatic rifles continued. The next representative of this class was the rifle SVT-38, created by F.V. Tokarev and subsequently upgraded to SVT-40. Like other rifles of the time, the new weapon was to get a bayonet for use in hand-to-hand combat.


At the end of the 1930s, military leaders believed, not without reason, that the bayonet battle did not outlive itself and would remain an important element of the nearest conflicts. Thus, all new rifles, including self-loading, had to be equipped with blades for use in melee. The 7,62-mm self-loading rifle of the Tokarev system arr. 1938 g. Or SVT-38. In developing this weapon, the experience of creating previous automatic systems, as well as blades, was actively used. For this reason, SVT-38 was supposed to receive a bayonet, somewhat similar to ABC-36 blade.

In the mid-thirties it was no longer believed that the bayonet should be constantly attached to the rifle. To fix it on the weapon (it concerned only new systems, but not old “Trekhliniek”) now followed only if necessary. The rest of the time the blade was to be in the sheath on the fighter's belt. This feature of the application, as well as the specifics of the use and the problems that arise, led to the final abandonment of needle bayonets. The future was only with bayonet knives. 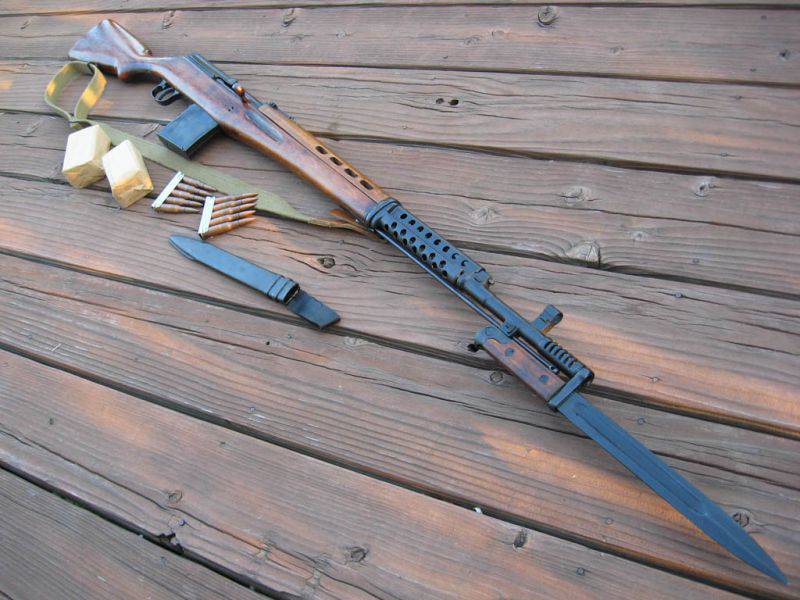 The SVT-38 rifle received a relatively long bayonet, the general structure of which resembled a blade for the ACB-36 rifle. A number of features of the previous weapon showed itself well and switched to a new product without noticeable changes. However, other design features have been reworked.

The main element of the new bayonet was a blade of one-sided sharpening with a pointed symmetrical combat end. With a total weapon length of 480 mm, the blade length was 360 mm. The heel and most of the blade had a width of 28 mm. Due to the great length of the blade, the valleys were used on the side surfaces. Unlike the bayonet for DIA-36, the new blade had straight valleys located along its longitudinal axis. According to some reports, early bayonets for Tokarev rifles had a sharpening on the edge located on the side of the ring, because of which, when installing the bayonet on the weapon, the blade was on top, under the barrel. According to other sources, the blades of different batches had a sharpening both on one and the other edge.

In the back part of the blade the crosspiece was fixed, made in the form of a metal plate with an elongated upper part. The latter provided for a ring with a diameter of 14 mm for mounting on the rifle barrel. The head of the handle was made of metal and had a device for mounting on the weapon. In its back surface there was a deep groove in the form of an inverted "T". There was also a spring-loaded latch operated by a button on the left side of the handle. The space between the crosspiece and the metal head was covered with two wooden cheeks on screws or rivets. 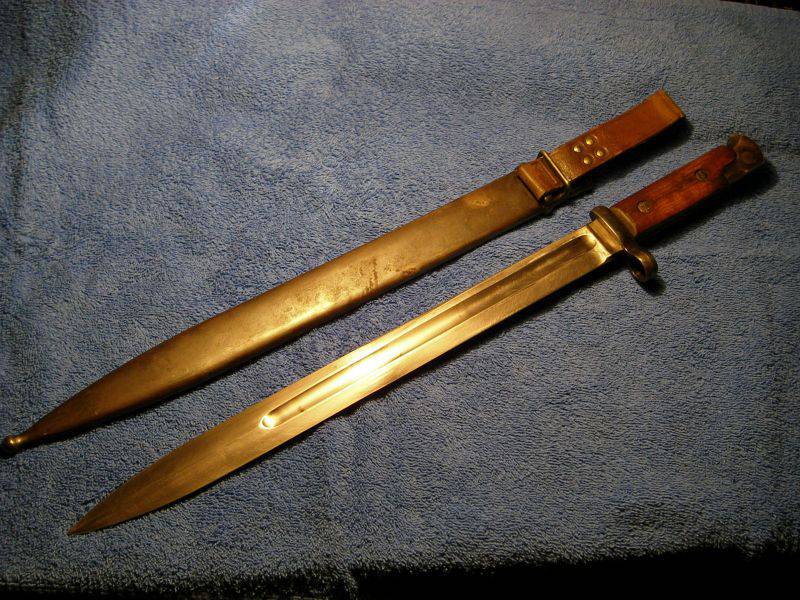 Bayonets for SVT-38 were completed with a sheath for carrying. Their main part was made of metal. By means of one or two metal rings, leather or cloth tape was attached, bent into a loop. With the help of this loop, the sheath was fastened on the belt of a soldier. The design of the scabbard made it possible to transfer the blade and, if necessary, quickly remove it for mounting on a weapon or using it for other purposes.

The rifle systems for mounting the bayonet had a fairly simple design. The bayonet was to be mounted on the muzzle of the rifle muzzle and fixed with the help of an inverted “T” bracket mounted under the barrel. In this case, the blade was rigidly fixed in its place and could only be removed when acting on the latch. The design of the rifle and bayonet allowed stabbing and cutting blows.

To install the bayonet on the SVT-38 rifle, it was necessary to remove the blade from the scabbard and attach it to the front of the weapon. In this case, the muzzle of the trunk should have fallen into the ring of the cross, and the T-shaped bracket should be placed in the corresponding groove in the head of the handle. When the bayonet moved towards the butt, the ring was put on the barrel, and the barrel bracket entered the groove and was fixed in it with a latch. With comparative simplicity, this design of the installation systems provided the required rigidity and fastening strength.

7,62-mm self-loading rifle Tokarev system arr. The 1938 of the year was put into service in the 1939, and shortly thereafter its mass production began. The assembly of new rifles was deployed at the Tula and Izhevsk weapons factories. There were also made bayonet knives. There is information about the production of bayonets for SVT-38 and at some other enterprises. Manufacturers labeled their products with the help of "branded" brands and numbers. Depending on the batch and the period of production, the marking could be applied on the side surface of the cross, the heel of the blade or even on the cheek of the handle. The designations used also depended on the time of manufacture and manufacturer.

During the first few months of operation, the SVT-38 rifle in the troops was able to identify various minor flaws that should be eliminated during modernization. Claims were expressed both to the rifle itself and to its bayonet. The appearance of such complaints has led to the creation of a modified rifle, which was put into service in April 1940 and is known under the designation SVT-40. Together with her adopted and new bayonet arr. 1940

One of the main objectives of the modernization project was to reduce the size and weight of the rifle. It was originally planned to shorten the weapon by reducing the length of the barrel, but tests have shown that in this case there are failures in the work of automation. Because of this, it was necessary to reduce the length of the weapon not by reducing the rifle, but by the bayonet. Thus, the main difference bayonet-knife arr. 1940 from the previous sample were the total length and dimensions of the blade. 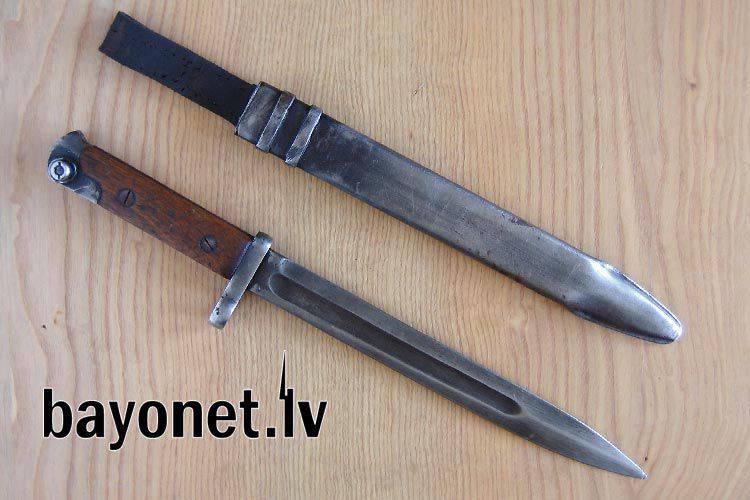 The shortened bayonet for the SVT-40 rifle and its scabbard. Photo Bayonet.lv

According to some sources, the bayonets for the early-release SVT-40 had a sharpened upper (located on the side of the cross ring) edge. Later had a blade on the other side. However, it cannot be excluded that the location of the cutting edge depended on the lot and the manufacturer and could be different for weapons from different periods.

The bayonets of the first lots had the same latch as their predecessors. In the future, this device has been modified. During the operation of weapons in the army, it turned out that during fencing on rifles, the enemy’s weapon could accidentally press the latch button, thereby disconnecting the bayonet or, at least, breaking the connection strength. In this case, the fighter remained virtually unarmed and lost chances to get out of the bout as a winner. To exclude such situations in the design of the bayonet arr. 1940, a new small detail.

The design of the latch itself with the spring and the button remained the same, but a small shoulder appeared on the outer surface of the handle head. He had to cover the button and protect it from accidental clicks. The shoulder almost completely closed the button above, behind and below, so that it could be completely pressed into the handle only when pressed in front. Due to this, the probability of accidental loss of the bayonet was sharply reduced. 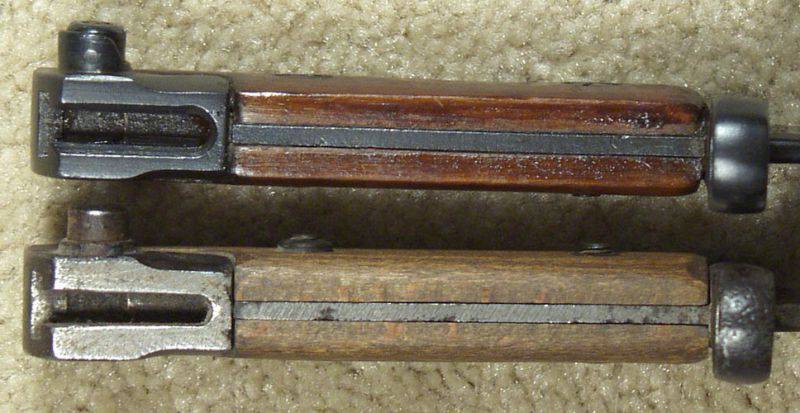 The upper surfaces of the arms of bayonets arr. 1940 (top) and arr. 1938 (bottom). The safety edge of the button is clearly visible on a newer sample. Photo Knife66.ru

For several years, the Soviet defense industry has produced about 1,6 million Tokarev rifles in several versions. In addition to the main variants of the 1938 and 1940, sniper SVT-40 and automatic rifles AVT-40, as well as automatic carbine ACT-40 were produced. Not all of these samples were completed with bayonets, because of which the number of blades released was noticeably less than the number of rifles. In fact, bayonets were made only for rifles of the 38 model and 40 model. There is information about equipping automatic AVT-40 with bayonets. Other types of weapons did not receive bayonets.

After the end of World War II, Tokarev self-loading rifles and their modifications were considered obsolete and went to storage or disposal. In addition, a significant number of weapons were adapted for civilian use and sold to the public as hunting rifles. During this alteration, army rifles were deprived of some elements, primarily bayonets and T-shaped brackets under the barrel.

In addition to the Red Army, the Tokarev rifles and bayonets for them were used by the armed forces of some friendly states. Some of the outdated rifle systems were transferred to the Warsaw Pact countries, etc.

In connection with the termination of the production and operation of rifles designed by F.V. Tokarev bayonets actively written off and sent to the smelter. Nevertheless, a sufficiently large number of such cold weapons survived to our days. Now bayonet knives for SVT-38 / 40 are a popular sample among cold weapon collectors. At the same time, depending on the state stories etc., the price of the blade can vary within sufficiently large limits.