January 28 2016
128
It became clear during the week that representatives of the Parliamentary Assembly of the Council of Europe, after exchanging peculiar potions with Russian parliamentarians about the powers of the Russian delegation, decided to hold a meeting with members of the so-called extra-systemic Russian opposition. As a result, a person like Mikhail Kasyanov, who was reportedly invited by the head of the European Alliance of Liberals and Democrats, Khan van Balen, arrived in Strasbourg, France, where the official delegation of Russian deputies refused to go. In general, a liberal liberal ...


According to the channel LifeNews, Mr. Kasyanov was received in one of the Strasbourg VIP restaurants - La Vignette Robertsau. The restaurant in France is known for serving exclusively by pre-ordering influential people and is closed to the general public. Apparently, the closeness of this institution helped the former Russian prime minister, who was accompanied in Strasbourg by such persons as Vladimir Kara-Murza, Olga Shorina, Vadim Prokhorov and Zhanna Nemtsov, to talk about the possibility of financing the Russian ultra-liberal project, which Monsieur Kasyanov considers himself to be . After the murder of Boris Nemtsov, Mr. Kasyanov is increasingly trying on the "uniform" of the main Russian "extra-systemic oppositionist".

But only for the fact that someone called himself a liberal, Europeans (even if they are very liberal Europeans - like the same van Baalen) will not give money. That is why Mikhail Kasyanov had to indulge in a liberal “dance”, focusing on the attention of PASSERS in the main areas of his activities in the Russian Federation and the main problems for this kind of activity. And Kasyanov set off in his liberal “dance” in a separate room of the PACE, where he was originally invited - even before going to the restaurant ...

What are the most "sharp" topics raised by Mr. Kasyanov at the PACE session, to which (to the PACE) neither he personally nor his companions have any relation. The “main” problem, as the ex-premier stated, is, of course, “the deterioration of the situation with rights and freedoms in Russia.” Well, of course - 100% totalitarianism and dictate, in which the same Mr. Kasyanov is not particularly hampered by conducting frankly anti-Russian activities both in Russia itself and when going abroad (to the same Strasbourg). With the rights of Mr. Kasyanov, everything is “so bad” that he can afford to compile “sanctioned” lists and pass them on to those who impose sanctions on the basis of Kasyanov’s lists on Russia ... In general, the security issue is nothing else. .

Mr. Kasyanov was also brought to the PACE members by the fact that there is such a person in Russia as Ramzan Kadyrov, and this same Kadyrov, you see, insulted the most honest and immaculate Russian opposition (more precisely in this context, the fifth column) with his statements ... From the statements of Kasyanov, published in social network:

At the same time, I drew the attention of PACE members to the threats made by the leaders of Chechnya against politicians, human rights defenders and journalists of liberal views.

Ramzan Kadyrov’s words about “enemies of the people”, by which he understands critics of the current government, are clear evidence of the problems existing in the country. After all historical there is only one parallel - with the period of Stalinist repressions, when "enemies of the people" were to be destroyed. These statements of one of the officials of Russia speak about moods in the ruling circles. These sentiments are that criticism of the authorities, in their understanding, should not go unpunished. In fact, intolerance and hatred of dissidents are publicly incited, a clash with the democratic part of Russian society is provoked. And the rally held on Friday in Chechnya testifies to the intention to show the opposition that they are ready to deal with it. To show that, like Boris Nemtsov, who was killed a year ago, we are all supposedly on the fly, and the lists have already been drawn up.

An interesting statement, especially when you consider that Mr. Kasyanov clearly distorts the term "opposition". In any country, opposition means political forces that may express a different point of view from the state, but they will never allow themselves to trade in the interests of their native country. Kasyanovskaya is only busy with the fact that it spoils both Russia itself and its citizens. Or, according to Mr. Kasyanov, the transfer to Washington of the “recommended” sanctions lists, which are a blow to the Russian economy and at the same time - the position and ordinary citizens, too, is that dissent that benefits the Fatherland and its people? If so, then the question arises: where does Mikhail Mikhailovich have this very Fatherland? ..

In order to impress the PACE representatives, the ex-premier, for whom the nickname “Misha 2%” was fixed in Russia since the prime minister's time, stated the need for a thorough investigation of the murder of Boris Nemtsov. At the same time, Kasyanov urged (attention!) Not to trust the conclusions of the Investigative Committee? Yes ... And who then need to trust? Perhaps some regular “commission of Dutch experts,” which will suddenly form itself and “find evidence of the involvement, for example, of Vladimir Putin personally to the shots on the bridge in the center of Moscow” ... After all, how are you today with Western “partners ": A)" Putin was probably involved in the murder of Litvinenko ", b)" Putin probably hid the results of doping tests of Russian athletes from WADA ", c)" Putin may have personally bribed Blatter ", d)" Putin's traces probably on the Maidan. ” And then “d”, and “e”, and “e”, and “yat” too ...

On the Vkontakte page, Kasyanov publishes a photo on which, in addition to the delegation members mentioned above, you can see (suddenly!) Browder's “old days”. He publishes the same photo and Browder himself on his Twitter page. 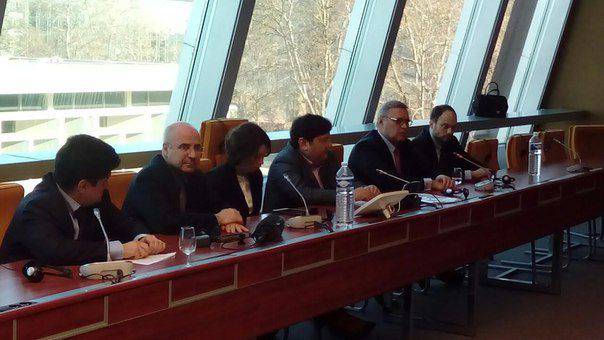 Yes, yes ... This is the very “investor” Browder, who at one time heated his hands on predatory privatization in the Russian Federation. This is the same William Browder, who pulled the assets from Russia with two hands, using the notorious fund Hermitage Capital, with which Magnitsky is associated. It turned out that Mr. Browder also entered the Kasyanov delegation.

If Browder is a member of the Kasyanov delegation, then this is a transparent hint at who, forgive the dissident (Kasyanov) who sponsors this. The scammer, to whom the RF IC has a lot of questions, seems to have decided to try again to get close to Russian assets by providing sponsorship assistance to “non-systemic” (in other words, the fifth column). This is the second time when large-scale criminals decide to invest in the Russian “marshland” in order to try again to gain access to Russian finances and subsoil. The first case is financing M. Khodorkovsky of "necessary" candidates before the elections to the State Duma 2016 of the year. Although why the "first, second." It is more likely that these are just links of a single whole, when certain forces are trying to push into the Russian government, which, by the way, is enough for the ultra-liberals today, who are ready to sell the interests of Russia to satisfy the interests of their own spill.

Ctrl Enter
Noticed oshЫbku Highlight text and press. Ctrl + Enter
We are
Results of the week. “As Comrade Lenin commanded - to work, work and work - and then there will be many, many money!”Syria: Americans scare themselves, and Asma Asad buys chairs
128 comments
Information
Dear reader, to leave comments on the publication, you must to register.