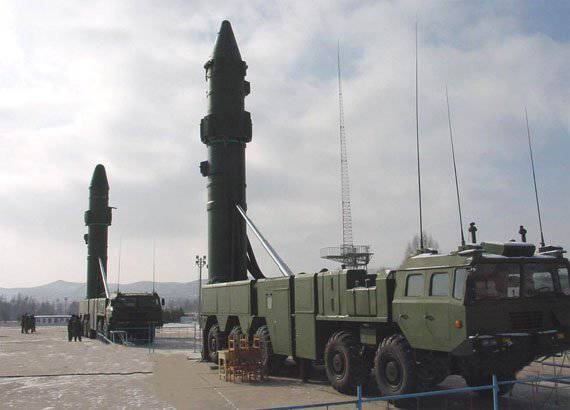 One of the latest Pentagon reports on Chinese military power has caused sensational headlines in the Indian media that China has deployed new nuclear missiles near the Indian border.

News the messages got a little messy, and new commercial satellite imagery shows that the launchers of the new DF-21C missiles are deployed in the central west of China.

New launchers DF-21C
Analysis of images from commercial satellites shows that the mobile installations of DF-21C medium range ballistic missiles are now deployed a few hundred kilometers west of Delingha in the western part of central China. In one of the 14 June 2010 images of the GeoEye-1 satellite, two launchers are visible approximately 230 km west of Delingha. Installations are located on dry desert slopes near Mount Chilian along the G215 national road. Rocket launchers, barracks, maintenance rooms and service units are hidden under large dark camouflage, which clearly stands out from the brown desert soil. 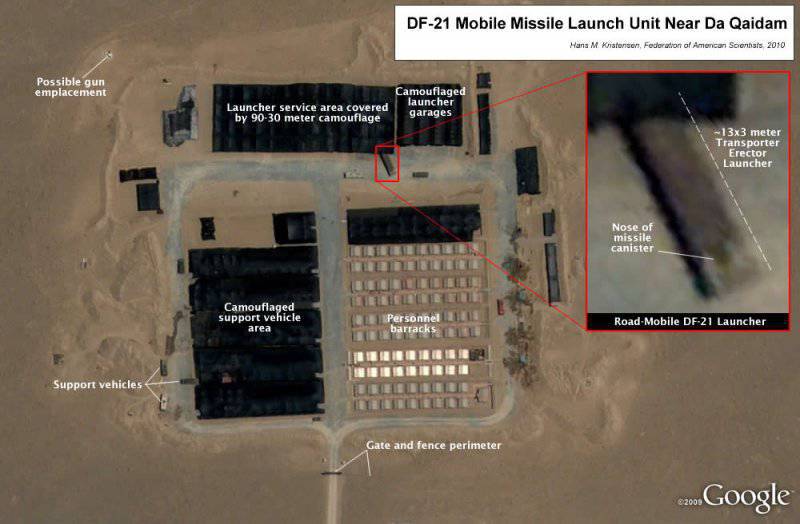 The Eastern Positioning Area (38 ° 6'37.75 "N, 94 ° 59'2.19" E) includes a central square with red barracks, clearly visible under camouflage, which probably also covers logistics premises, communication machines, fuel trucks, and vehicles for the transport of personnel. A 88-sized building on 17 meters of brown camouflaged color probably accommodates maintenance rooms with five 15-meter garages. Mobile launchers are located nearby. Approximately 130 meters north of the central square under brown camouflage and dirt barriers are fuel blocks. One can see two pads, one in 180 meters from the main buildings, the other on the access road leading to the national road G215. 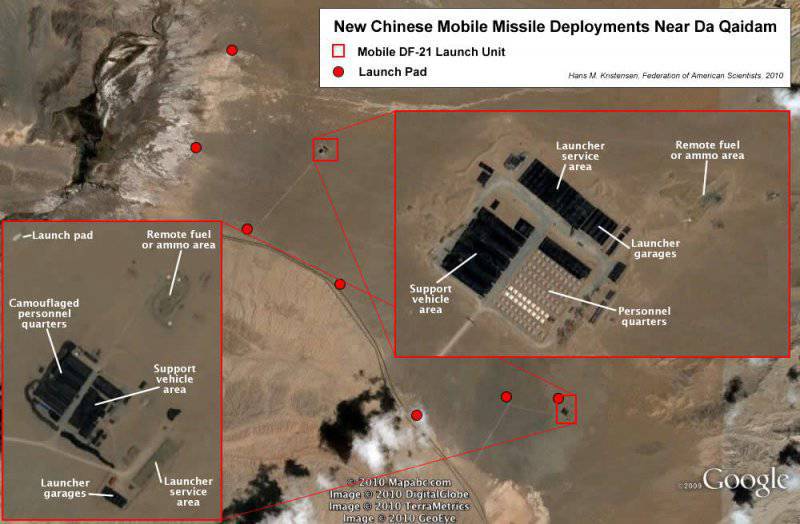 The western positioning region (38 ° 9'32.82 "N, 94 ° 55'37.02" E) is located approximately 7 km to the west and about 2,4 km north of the national G215 road. It consists of four sections: personnel barracks, logistics vehicles, maintenance facilities of 90 size per 33 meter and four garages, and possibly also a fuel storage area. The launch pad is located along the access road near G215.

The satellite image shows how the entry or exit of the DF-21C mobile complex from a masked maintenance area looks like. The characteristic cone-shaped nose of the rocket is clearly visible behind the driver’s cabin, the rest of the launcher is probably covered with a tarpaulin.

This is the first time that DF-21C has been detected in its deployment area. In 2007, the first visual signs of a transition from DF-4 to DF-21 in the Delingha region were observed on commercial satellite images. For the second time in 2008, an extensive launch pad system was observed, which extends west from Delingha along the G215 national route (last Da Qaidam).

There are five launch sites within a radius of five miles from two missile sites with dozens of other sites along the G215 route in both its directions and to the north of it. 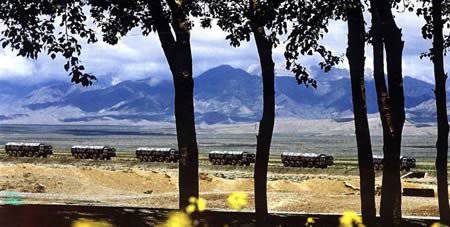 China's ongoing transition from outdated liquid fuel rockets to new solid-fuel rockets is attracting more and more attention. New systems are more mobile and therefore less vulnerable to enemy attacks. However, satellite images also give hints of restrictions on their use.

First, the mobile launcher is large. It requires considerable human resources and a large amount of support equipment. This makes its fast movement limited and relatively easy to detect from satellite images.

Mobile launch complexes, of course, will be dispersed in the landscape in case of war. But despite the fact that mobile launchers have some off-road capabilities, they require solid ground at launch to prevent damage from debris raised by rocket engines. As a result, launch complexes will have to remain on the roads or be used from ready-made launch sites, which are clearly highlighted on high-resolution satellite images. In addition, the launcher will not simply be driven off and will launch itself, it should all happen with the support of vehicles for orientation, repair and communication.

Indian Media News
Reports of the deployment of the DF-21 missiles brought India into a stupor in 2010 after the Pentagon’s report on the state of the Chinese armed forces. In particular, it was reported that China replaced the DF-4 missiles with DF-21 to improve regional deterrence. This message is contained in a section on Sino-Indian relations, and was picked up by the Press Trust of India, which mistakenly reported that the Pentagon report states that "China has moved the advanced CSS-5 long-range missiles [DF-21] close to the borders with India. The Times of India even wrote that the missiles were deployed "on the border" with India.

Not surprisingly, inaccurate information triggered dramatic articles in India, including rumors that the Command of the Indian Strategic Forces was considering retaliation or had already transferred missile units capable of carrying nuclear warheads to the north of the border with China.

However, the Pentagon’s report says nothing about moving the DF-21 missiles “closer to” or “to” the Indian border. Here is the actual statement: “To increase regional deterrence, the PLA replaced the old CSS-3 medium-range liquid-fuel ballistic missiles capable of carrying nuclear warheads with the more advanced and survivable CSS-5 solid-fuel missiles ...” The report echoes the 2009 report for the year: “People the liberation army replaced the outdated CSS-3 medium-range liquid-fuel ballistic missiles (DF-4 BRSD) capable of carrying nuclear warheads with more modern solid-fuel missiles CSS-5 MBR in Western China. "

The report merely described the obvious, almost complete, two-decade-long replacement of DF-4 missiles by DF-21 missiles by China, probably at two army support bases in Hunan and Qinghai provinces. Both deployment areas are located more than 1500 kilometers from the Indian border. 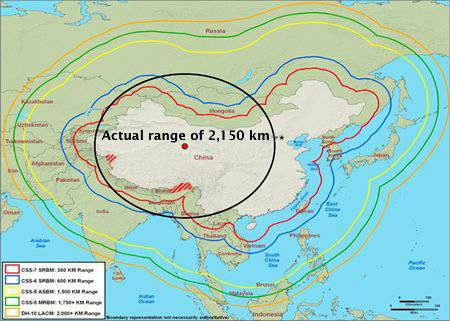 The distance maps of these missiles are also misleading, because they measure the range from the Chinese border, as if the launchers were deployed there, and not by actual deployment far from the border. The 2008 report of the year, for example, includes a map essentially showing the borders of China, extended outwards and painted in different colors, according to the missile's range. As a result, the DF-21 received a range of about 3000 km, if measured from the actual location.

The 2010 report of the year is even worse because it shows the range of missiles without a contour in the form of circles, and is measured from the most extreme point of the border. The result is a map that is even more misleading, representing the DF-21 range in whole 3500 km from the actual location. The actual range is maximum 2150 km for DF-21A (CSS-5 Mod 2) and 1770 km for DF-21C. 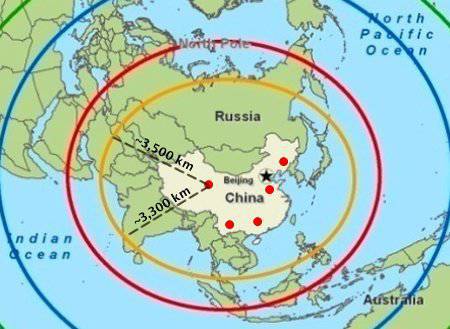 Although the DF-21 launcher theoretically can travel all the way to the border to launch, the reality is, however, that the DF-21 patrol and patrol areas are far from the borders in order to protect fragile mobile complexes from air attack. Maps must reflect this reality.