Battle of Izandlwane and the role of the pouch

January 28 2016
31
Nowadays it is difficult to meet a person who would not have heard of such an element of military equipment as a pouch. Over the course of many decades, it has constantly evolved following the change in rifle weapons. A pouch is quite a utilitarian thing: it is a small container bag that is worn either on a waist belt or on unloading equipment. The military used a pouch for placing and carrying ammunition (originally cartridges in the cage). History and the reasons for the appearance of the pouch go to the end of the XIX century, the British paid hundreds of lives of their soldiers for the awareness of the need for this element of equipment in the soldiers' equipment.


Crucial was the battle of Izandlwana (or the battle at the hill of Izandlwana, as it is also called). This battle took place on 22 on January 1879 of the year as part of the Anglo-Zulu war. The outbreak of hostilities was preceded by an ultimatum by the British to the Zulu king of Kechwayo, in fact it was about the kingdom becoming a protectorate of the British Empire. The king refused to accept this ultimatum, and Britain declared war on him. 9 January 1879, British troops crossed the ford of Rorks-Drift and 11 in January began crossing the Buffalo River, being in the territory of Zululand. On January 19, Colonel Anthony Durnford received an order to launch an advance to Izandlwana Hill.

January 20 British camped at this hill. Feeling their technical superiority over the Zulus in armament, as well as in organization and discipline, the British did not equip a protected camp. They did not dig in, build engineering fortifications, and did not even enclose their camp with carts from a convoy, so the British officers were sure that they would be able to repel any enemy attack. However, the British, who before the start of the battle could not estimate the scale of the Zulus troops, miscalculated. King Quechvayo brought about 22 thousand people to the battlefield, while in the English camp at that moment there were no more than 1700 people. 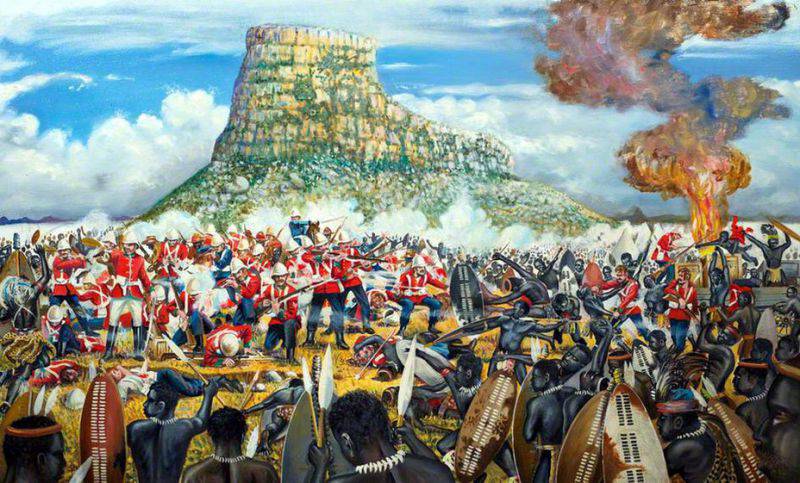 The composition of the forces of the British at that time was as follows. There were a total of up to 1700 people in the camp, of which 300 were civilians: they were mostly natives who did some simple work — porters, companions, groomsmen, laborers, and ordinary servants. Regular British units were represented by six companies of the 24 Infantry Regiment (5 company mouth from the 1 Battalion, and 1 company from the 2 Battalion company), a cavalry squad (104 man), as well as auxiliary units and a rear hospital. Auxiliary units of the native troops, recruited from the Natalu Zulu (Natalian native corps), Swazi and Basotho, also included cavalry detachments, a detachment of native carabineers and six infantry native mouths, as well as an engineering unit. The British also had two 7-pounders from the 5 artillery brigade and a Congrave missile battery from two launchers from the 7 artillery brigade. He commanded the English detachment in the camp, Colonel Henry Pullein. This officer had no combat experience, but was considered a good administrator in the army, so he was entrusted with the management of the British camp with all the supplies, wagons and equipment. Just before the start of the battle, Colonel Anthony Durnford arrived in the camp with five squads of native cavalrymen of the Natal Corps, this officer had combat experience and was considered one of the best saber fencers in all of South Africa. In fact, he led the cavalry in this battle, and Pullein commanded the infantry units.

The Zulu units that opposed the British were tribal militia and were armed with primitive weapons — asegai spears, wooden Kirri and other cold weapons. Some warriors were armed with obsolete firearms of various types, mainly they were flint rifles, which Ketchwayo managed to buy in Mozambique before the war, as well as a number of guns were purchased by Zulus for ivory from English merchants. In this case, the Zulus were distinguished by poor rifle training, they did not have experience in using firearms in battles, and the reserves of ammunition and gunpowder were small. The main advantage of the Zulus was their number, they are superior to the British more than tenfold.

22 January 1879, the British troops continued to have a peaceful breakfast and go about their business, when from the outposts sounded the alarm. Throwing their affairs, the soldiers rushed to the weapon. Having taken a defensive order, they watched as the black cloud of the Zulus fell on them because of the nearby hills, becoming more numerous. The soldiers watched as the Zulu lively crowded the exposed outposts, approaching the camp. Only then did the British begin to understand how misguided they were in determining the forces of the enemy. 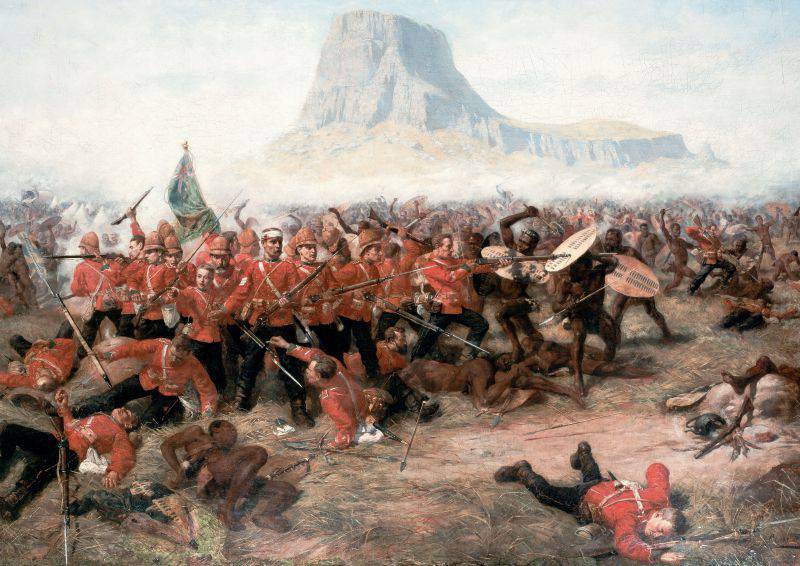 As soon as the Zulus were close enough, the British used their trump card - artillery. The guns gave a volley of shrapnel that broke through wide gaps in the advancing "black wall", but this did not stop the Zulus. When they came even closer, the British opened fire on them with rifles, but this, in the end, did not bring the desired result. For some time they managed to force the enemy to lie down in the tall grass, but the Zulus again and again rose under the bullets and went forward. In place of the fallen, more and more new Zulu warriors appeared.

When Pullein gave the order to his soldiers, deployed on the ground in a thin chain in red uniforms, to retreat closer to the camp, some of the native soldiers simply did not stop at the new line of defense. They fled through the camp itself. There were gaps in the British rifle chain. Breaking through the British defense in several places, the defeat of their small forces by the Zulus was only a matter of time. They won a terrible hand-to-hand fight, the Zulus were not taken prisoners, they killed everyone they could overtake. The wild battle cries and whistles of throwing copies of assegasev were what English soldiers and officers heard before they died.

Parts of the Natalian indigenous corps stopped resistance before the soldiers of the 24 regiment, being partially dispersed, and partly turning to flight. It is worth noting that the cavalry detachments of the Natalian native corps commanded by Durnford were the first to join the battle on that day and used up all their ammunition before, their guns simply stopped firing. In this case, the Zulus pursued all fled warrior corps. Durnford with a group of Natal volunteers died on his flank, after the battle his body was found under a pile of corpses. 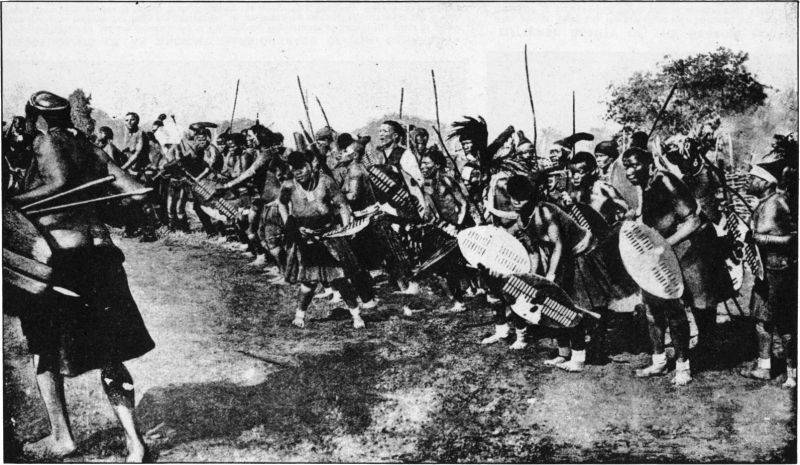 In the end, the black avalanche of the Zulu army swallowed up the camp, while in the heat of the battle the Zulus even killed all oxen and dogs, as well as a large number of horses. The bodies of animals were lying in the camp mixed with human ones. After the battle was over, the Zulus, according to their traditions, ripped apart the corpses of their enemies and their dead warriors in order to free their souls. The whole area in front of the hill Izandlvane represented a huge mass grave.

The British lost an 1329 man in battle (more than 800 Europeans among them), including an 52 officer. After the battle, all 55 Europeans and no more than 300 natives were able to return to the location of British troops. Battle participant Lt. Horace Smith-Dorrien later in his memoirs noted that before the battle, King Kechvayo gave his soldiers the order to "kill soldiers in red uniforms," ​​so most of the survivors were officers (they wore a dark blue field uniform), gunners (they wore blue uniforms) or irregular forces. The Zulus lost about three thousand of their warriors directly in the battle, and a huge number of soldiers died later from wounds received in battle. Their trophies were two 7-pounders, near 1000 breech-loading rifles and 400 thousands of rounds for them, as well as the 3 banner.

The main reason for the defeat of the British was the banal underestimation of the opponent. But one of the reasons for the defeat was also a problem with the supply of shooters with ammunition. Pouches with cartridges in this battle, perhaps, would have saved hundreds of lives, if they were. The British infantry in the battle of Izandlwana were fairly modern and effective 11,43-mm Martini-Henry rifles, which had a good rate of fire - 10 shots per minute. From a technical point of view, this sample of small arms was a single-shot rifle with manual reloading of a block shutter. This rifle enjoyed love in the British army. The advantages of this weapon were strength, simplicity, rate of fire, reliability of the shutter and the substitutability of most parts. However, a small cartridge belt, which was located on the belt of the British soldier, could hold all 20 cartridges, all other cartridges were transported in special boxes. 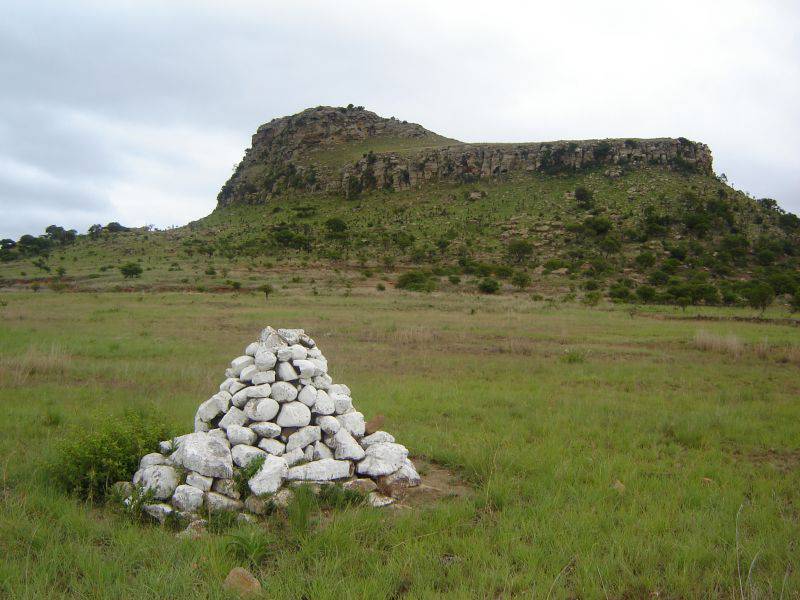 One of the mounds marking the mass graves of British soldiers

In order to open such a box, it was necessary to first unscrew the 4 long screws, then use a special knife to open a thick sheet of zinc, which protected the cartridges from moisture. Only after that it was possible to take out the boxes with cartridges, which still needed to be cut with a bayonet, and only then take out the paper bundles of ammunition. Each box contained 30 cartridges of 10 cartridges each. At the same time, only the commissary could carry out a “ritual” of opening such a box. The autopsy procedure took up to 10 minutes, usually it was performed slowly, since a substantial fine was deducted for damage to each box from the quartermaster's salary. For each non-commissioned officer, the quartermaster was assigned a specific unit, which he had to supply in battle, given the expense of ammunition. With such a rigorous approach, cartridges were issued only to their carriers, whom the non-commissioned officer knew personally.

The line of defense of the British troops was located at a distance from the camp, as a result of this, the distribution of ammunition along the stretched rifle chain took time. During the battle at the Izandlwana hill, the British soldiers constantly faced “cartridge hunger”, as the carriers of the cartridges had to first run before the train, wait until they opened the cartridge boxes and then go back. At the same time, an occupant who could not give out cartridges to "alien" carriers could stand in an already opened cartridge box. All these delays almost completely negated the entire technical potential of a fairly modern Martini-Henry rifle.

It was after the defeat in the base camp near Izandlvane that the British decided to increase the wearable ammunition of the soldier by a factor of 3. Especially for this purpose, a special ammunition bag was created, which soldiers carried on the shoulder strap under the bag for things. It was from here that the name of this additional bag went - the pouch.

Ctrl Enter
Noticed oshЫbku Highlight text and press. Ctrl + Enter
We are
Martial art zulusKing of the Ring. Nikolai Fedorovich Korolev
31 comment
Information
Dear reader, to leave comments on the publication, you must to register.