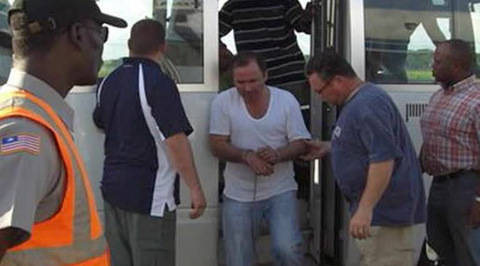 Everyone knows that there are quite a large number of countries beyond our western border who know better than us how to live. And they are ready to share their experience with anyone, especially with the barbarians in the east.


Germany is concerned about human rights violations in Poland. Even sanctions threaten. About Syria and Iraq, we are all silently silent, because there anyone is engaged in righteous things, but not Russians. That is not the bomb there, not those. A scattered hospital is a cost of democracy.

And the barbarians give lessons simply need. Attaching, or trying to attach to democracy and the triumph of its values. And if someone does not want to join ... well, "then we fly to you."

And what if flying is dangerous? If you can buy come with the dollar on the same dollar? There are methods for such situations.

Unfortunately, some events over time are not given due attention. And it would be necessary.

Russian Konstantin Yaroshenko was convicted in 2011 for 20 years in prison. He was brought to the US from Liberia, where he was arrested in May 2010. The undercover American agents of the Federal Anti-Drug Administration allegedly caught up with the criminal intent to transport a large quantity of cocaine.

And for the intentions Yaroshenko received 20 years. Much has been written on this subject, but, unfortunately, little has been done. Despite everything, Yaroshenko was not extradited, and his guilt was not really proven. But for true democracy, such trifles are irrelevant.

The situation is as follows: Yaroshenko is actually killed in an American prison. At first, the American jailers for a very long time did not recognize the fact that Yaroshenko required medical assistance, and after Russian diplomats still forced them to conduct a medical examination, Yaroshenko simply spat on the results.

As Konstantin Dolgov, the ombudsman, noted, the serious chronic diseases of the Russian pilot were caused by the unsatisfactory conditions of his detention in prison, the failure to provide him with the necessary medical aid for a long time, while the late treatment, which was prescribed by Yaroshenko, is selective and ineffective. .

When the situation escalated to the limit, the American jailers still recognized that surgical treatment was necessary. And ... put Yaroshenko in the queue. And wait for their turn Yaroshenko may a few months. Here is a deal.

But the staff of our embassy did not give up, and continued to bombard all possible instances of the US State Department and the Prison Bureau, which is under the jurisdiction of the US Department of Justice.

And December 25 last year a democratic miracle happened. The American authorities admitted that the condition of Yaroshenko is deteriorating. And then began the sheer triumph of democracy and respect for human rights. In American style, naturally.

According to lawyer Yaroshenko, Alexei Tarasov, Konstantin was nevertheless underwent surgery. But how it was all done, deserves a detailed story.

Yaroshenko was operated on January 21 in a hospital in the city of Trenton (New Jersey), which is located near the prison. He was not warned in advance about this, did not conduct any training, did not do analyzes.

At the same time, for some reason Yaroshenko was not placed in a prison infirmary and did not provide him with medicines prescribed by the doctor. Immediately to the camera. And at night, when the effect of anesthesia finally stopped, problems began. Yes, such that cellmates Yaroshenko notified the guards about this, but in the end there was no medical assistance provided to him.

In the prison's medical unit on the night from 21 to 22, Yaroshenko was given ... one pill, according to the doctors, it was anesthetic. At the same time, the Russian citizen was told that there were no medicines needed for the rehabilitation of the prison hospital.

"On the one hand, for many years we have said that the operation should be carried out. On the other hand, the assistance provided in this way, without warning, without medicines, without the possibility of at least lying down, is surprising. The Russian embassy has already been notified of the situation The United States and the Russian Consulate General in New York. Yaroshenko is seeking a meeting with Russian diplomats, "lawyer Yaroshenko Tarasov told the Tass news agency.

Here is a demonstration of power. Here is such a model of kindness, philanthropy and respect for the most elementary human rights.

You know, some American organisms would be nice to talk with those fighters of the Ukrainian armed forces who, in 2014, crawled over the Russian-Ukrainian border with the last of their strength, hoping that they would not let us die. And they did not give, rescued, operated, treated. And only after the improvement was sent back.

I will also clarify that the return is to Ukraine, to my own. Not militia passed.

And who, sorry, after this barbarian?

Anticipating some objections from our eternal opponents on the topic "but you / us and this does not happen," I will immediately answer. Yes, we are not all smooth and not always. But. Even two "but".

First: we do not steal people all over the world and do not arrange closed political trials. Say about poor thing Savchenko? Tell me. And I will object. It did not smell politics there, she fluttered into politics, having been framed in a bullpen on Russian territory. The fact that she was kidnapped on the territory of Ukraine has already been silenced by the liberosmi, for she herself has said so much nonsense that there are no volunteers to repeat. And no one called her to us. But about Savchenko, I’m happy to raise the topic in detail, when the appropriate people are allowed to publish these details.

And the second. We do not impose our notions on how to live. This is a lot of Western democrats. And they have already done more than one country in this way.

Summarizing all the above, I would like to add only one thing. Yes, we for the most part have long parted with illusions about the fabulous world of Western democracy. And you can not throw us another confirmation. And so it’s in the know that if you are a normal Russian, not a “swamp” organism, choking on a vicious bark against Russia, like Kasparov or Makarevich, then it’s unlikely that it will shine from the bounty of democracy.

As for Konstantin Yaroshenko, I hope that with the efforts of our diplomatic corps in the United States, Dolgov, Tarasov, and TASS employees, who, with the persistence of woodpeckers, hammer on their fronts, the situation will get better.

And it would be very nice if Yaroshenko still turns out to be in Russia not after the time that the Americans took him. Right, at least ask the president a question live.

Ctrl Enter
Noticed oshЫbku Highlight text and press. Ctrl + Enter
We are
Results of the week. "Guys let's be friends!"Memo to mercenaries in Africa
63 comments
Information
Dear reader, to leave comments on the publication, you must to register.