Unlike Russia, where the conviction dominates over the need to ban tactical nuclear weapons weapon (TNW), the United States and NATO countries consider its use possible. Moreover, they pay great attention to this. In a lightning strike strategy, an important role is played by TNW located in Europe. The results of the analysis of the state of NATO’s nuclear planning require that specific measures be taken to prevent the military threat from escalating into open conflict.

In the 90 of the last century, as a result of unilateral initiatives of the President of the USSR (October of 1991), as well as the Treaty on the Elimination of Intermediate-Range and Short-Range Missiles (December of 1987), the domestic arsenal of tactical nuclear forces and INF Treaty had a significant reduction. Uncertainty arose in understanding the need to preserve these weapons and ammunition with all the ensuing consequences, first of all, the possibility and feasibility of using them in solving nuclear deterrence problems on a regional scale. 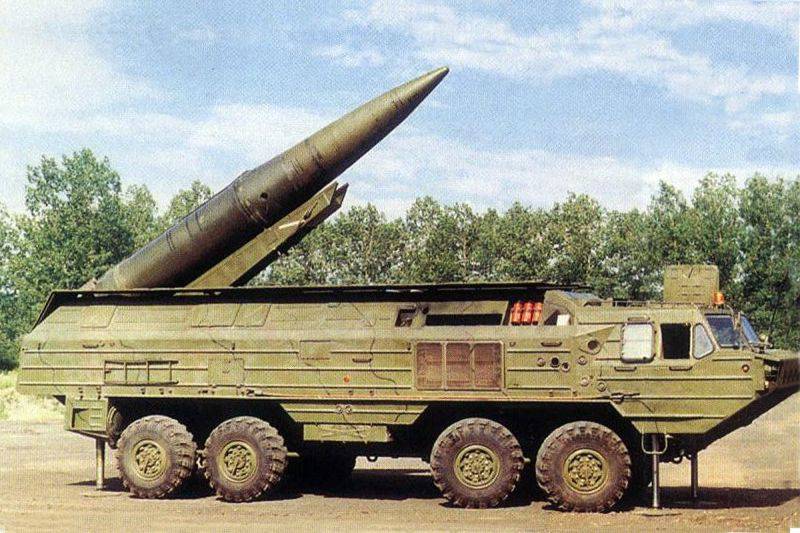 OTRK "Oka" was adopted in 1980-m. Launchers and more 200 missiles that were on the territory of the USSR were destroyed in 1989 year - allegedly on the basis of the INF Treaty

The use of tactical nuclear weapons was not planned at the exercises, the methods and forms of military actions required under such conditions were not developed. As a result, the corresponding skills of commanders and staff officers were lost. The process of degradation of the military infrastructure ensuring the operation of tactical nuclear weapons has accelerated.

The military press very little discussed the problems relating to non-strategic nuclear weapons, underestimated its importance to the security of the country, which caused various interpretations in the methods of its use. Some researchers and practitioners believe that in repelling aggression it is advisable to use TNW in all cases first. But the explanations seem to be insufficiently correct, since they are based primarily on the weakening of Russia's military might. Say, the use of nuclear weapons in the initial phase of repelling an attack by the West should be demonstrative in nature and without disastrous consequences, but convincingly prove readiness for an escalation of nuclear strikes in the event of further aggression.

Unlike deterrence, the de-escalation of aggression is not a threat, but rather forcing the enemy to cease hostilities with strikes of various sizes, including nuclear, in response to the use of nuclear weapons by the enemy and other means of mass destruction.

According to the experience of exercises held in military districts in 1960 – 1988, the methods of work of the commander and front staff during the preparation and planning of a nuclear attack depended on the situation and were carried out on the basis of the General Staff Directive, which indicated the ammunition consumption and the depth in which targets (objects) must be hit by front forces. The direct formation of a decision on the use of tactical nuclear weapons was carried out at the front headquarters. For this purpose, a special nuclear planning group was created in advance. Usually it was headed by the chief of staff of the front.

The nuclear strike plan was approved by the front commander and regularly updated depending on the identification of important new objects (targets). As practice shows, such a plan should be reported before the announcement of the decision on the operation with the expectation that the use of TNW is authorized when a general order is issued.

Since the beginning of the conflict and the military threat build-up, the main efforts have been focused on collecting, studying and analyzing the situation to identify new important goals, as well as organizing the advancement of TNW to false boundaries to demonstrate the presence of nuclear forces, and subsequently their hidden relocation to positional areas. Special attention was paid to engineering equipment and disguise.

With the emergence of an immediate threat of deployment of aggression, by order or by an established signal of the General Staff (Supreme Command rates), the formations and parts of the front were brought to a state of alert “complete”. The troops and headquarters occupied the secret areas assigned to them, the MTA and RIA were positional, and the air forces of the front occupied alternate airfields.

Studies conducted in the course of the exercise showed that during this period the possible nature of the actions of the enemy and his intentions to use nuclear weapons can be most fully evaluated. Therefore, the operational directive of the General Staff (Supreme Command rates) came to the front, as a rule, two or three days before the onset of aggression.

With the receipt of reliable data on the readiness of the enemy to use nuclear weapons, work methods in front management acquired a special direction, which consisted in supplementary exploration of objects (targets) to be destroyed by nuclear weapons and corrected, therefore, decisions on their use.

The most expedient method of preparing the operation was parallel. During this period, high coordination and professionalism of the officers take on special significance. Data collection and processing was carried out with the extensive use of automated mode with mandatory feedback.

Immediately before nuclear strikes, the regulations were usually as follows. According to the signal set at the front headquarters, the commander, the front headquarters officer, the head of the RVAA, the Air Force and their chiefs of staff, the head of the operational department, the officers involved in the management of MFA and the Air Force, in the process of direct preparation and application of retaliatory nuclear strikes, took their places in the center the battle command of the front, and the head of the intelligence of the front with officers is the intelligence center. Between the CBU, the RC, the missile forces and the Air Force in advance organized communication of all types and automated control systems.

For further exploration of previously identified targets, primarily nuclear weapons, and the establishment of new ones by order of the front commander, aviation. On some exercises, not only intelligence, but all. Firstly, to withdraw it from the enemy’s strikes, and secondly, for visual additional reconnaissance of targets.

The dozor-86 exercise examined the working methods of all officials involved in this task. Upon detection of a target, an airborne pilot transferred to the reconnaissance center, for example: “Grove - 2 km north of Ivanov, concentrates up to 100 tanks". Having received such information in the RC, it was determined, for example, that previously there were no tanks in this area. And they transmitted to the Central Bank: “The target is new, up to 100 tanks in the grove” and the coordinates on the encoded map.

In the CBU, an officer at the MFA headquarters put a target on the map of the commander and determined the geographical coordinates, clarified the ACS.

The head of the MFA and A determined the optimal variant (air or ground) of a nuclear weapon to destroy this target and reported to the front commander.

He identified the performer - MTA and the Air Force and gave the command to the head: "MTA, 100, air, destroy."

The MFA Head determined the number of the RDB and readiness.

The head of the direction to this brigade duplicated the order to the RDB commander for the available means of communication. With the availability of modern tools, the process can be reduced.

The proposed option of using tactical nuclear weapons from the experience of 60 – 80-s exercises is not a template and requires discussion of the use of these formidable weapons. It must be remembered that any of its first use, except as a last resort, is adventurism, which leads to an escalation of nuclear strikes down to strategic ones and will lead to a general catastrophe.

Ctrl Enter
Noticed oshЫbku Highlight text and press. Ctrl + Enter
We are
Tactical nuclear weapons in EuropeThree whales of American nuclear deterrence
42 comments
Information
Dear reader, to leave comments on the publication, you must to register.