The development of a new domestic turbofan engine is entering the final stretch. The project is able to become the basis for the breakthrough of the domestic aircraft industry to the world market.

The first phase of flight tests of a new engine for civil aviation PD-14 (the developer is Perm Aviadvigatel, the parent manufacturer is Perm Motor Plants). The importance of the event is extraordinary: in the coming years in our country, a capacious segment of mechanical engineering - the civil aircraft engine industry - may revive.

In 2014, Russian enterprises launched 43 passenger and transport aircraft, of which only four were equipped with domestically produced engines. In the short term, the situation may change. It is still premature to assess export prospects for PD-14, however, the engine has all the possibilities to saturate the domestic market.

At the December press conference, Russian President Vladimir Putin called the completion of the PD-14 project (the start of serial production is scheduled for 2017 year) as the most important event in the domestic engine building industry since the end of the 80-s of the last century:

- The new engine, which it is planned to equip the promising domestic aircraft MS-21 ("Main plane of the XXI century"), is a breakthrough, a huge achievement. The Russian aviation industry should be guided by its own developments. The creation of PD-14 will allow the development of a whole line of medium-range and long-range aircraft. Previously, we planned to equip domestic airliners with foreign Pratt & Whitney or Rolls-Royce engines. Obviously, PD-14 will be much better than foreign analogues.

The unified design of the aircraft engine will allow the engine to be installed on almost all domestic passenger and transport aircraft. The PD-14 engine (with 14 tons of tonnage) is planned to be equipped with MS-21-200 / 300 / 400 and Il-76 and Il-214 military transport planes. A more powerful modification of the PD-18 is supposed to be used on a medium-range narrow-body passenger liner Tu-214 and long-range wide-body IL-96. A light version of the PD-10 can be equipped with Sukhoi Superjet-100 short-haul aircraft (instead of the French SaM-146 engine). A separate engine modification is planned to be installed on the heavy transport helicopter Mi-26 (instead of the Ukrainian D-136).

The widespread use of engines of the PD family should provide the necessary volume of serial production and will help recoup the costs of the PD-14 project. The total investment in it should be 70 billion rubles, of which 35 billion rubles - budgetary funds. 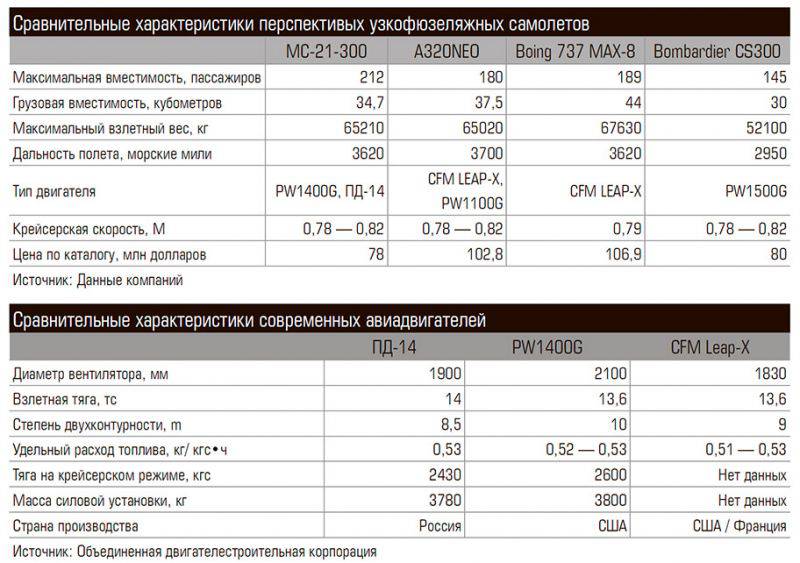 PD-14 vs PS-90
Now the only domestic engine that is equipped with modern Russian airliners is PS-90A (the head manufacturer is Perm Engine Plants). In 2014, the aircraft factories launched and transferred into service four new aircraft equipped with these engines: two Tu-214 OH (the customer is the Ministry of Defense of the Russian Federation), Tu-214, Il-96-300 (the customer is the administration of the President of the Russian Federation). The rest of the airliners produced in our country were equipped with foreign engines: 34 of the Sukhoi Superjet 100 with SaM146 engines (produced by the French company PowerJet), three An-148 with D-436-148 engines, two An-140 engines with TV3-117 engines - two X-XXXX-XNUMX engines with X-Axx-XNUMX engines, two X-Axn-XNUMX engines, two X-Axx-XNUMX engines. (all engines for An released Zaporizhzhya "Motor Sich").

According to the chief designer of the engine family PD Igor Maximov, almost all foreign engines on Russian aircraft in the future will be replaced by domestic counterparts.

- Flight technical characteristics of PD-14 are ahead of those of PS-90А. In particular, the installation of the latest engine on the modern Russian military transport aircraft IL-76MD-90А (mass production started in 2015 with the PS-90 engine) will significantly extend the life cycle of the liner. A modification of the aircraft with the PD-14M engine will increase the practical flight range with a maximum load of 60 tons from 4 thousand km to 4,78 thousand, the flight range without load will increase from 9,7 thousand km to 10,8 thousand, the fuel consumption per ton-kilometer will decrease by 14%, The cost of transporting a ton of cargo will be reduced by 10%, says Igor Maximov.

Aviadvigatel General Designer Alexander Inozemtsev is confident that PD-14 will successfully compete with promising products of a similar purpose by the leaders of the world aircraft engine building: PW1400G (MC-21 aircraft) and PW1100G (A320Neo aircraft) engines from Pratt & Whitney, as well as Leap-1А engines (A320Neo aircraft) and Leap-1B (B737 Max aircraft) of the CFMI consortium (General Electric and Snecma).

- According to the conclusion of the Central Institute of Aviation Motors. P.I. Baranova, the engine PD-14 is not inferior to foreign competitors in the sum of technical and economic parameters. This was achieved by mastering the unique technology of manufacturing parts and assemblies. In particular, the use of new materials at the Ufa Engine-Building Production Association made it possible to reduce the mass of a hollow titanium fan blade by 30%, which made it possible to reduce the weight of PD-14 by 8 - 10% compared to Russian engines of the old generation. The introduction of the technology for manufacturing single-crystal turbine blades from alloys of a new generation with a protective ceramic coating at the Perm Engine Plant made it possible to raise the temperature of the gas in front of the turbine from 1900 to 2000 K. The developers also managed to increase the compression ratio in the compressor by 20 - 50%, the degree of bypass ratio - in twice, - said Alexander Inozemtsev.

The prospects for PD-14 in the international market will depend on the sales volumes of short-haul (regional) Sukhoi Superjet-100 aircraft (mass production is conducted from 2008 of the year) and long-haul airliners MC-21 (launch in the series on 2017 year). As follows from the forecast of Boeing Corporation, from 2015 to 2034 in the world 38 050 aircraft will be purchased, of which 35 560 units are trunk (totaling 5,5 trillion dollars), 2490 units (by 100 billion dollars) are regional.

Thus, the MC-21 project is aimed at the most capacious niche of the world aircraft building market. After the start of serial production of the PD-14, buyers will be offered a choice of an American (Pratt & Whitney) or Russian engine of a new generation.

Now the Irkut corporation has 163 “firm” orders for the MS-21. The only foreign buyer is the Malaysian company Crecom Burj Berhad (25 aircraft). The largest Russian customer is Aeroflot (50 aircraft). VEB-Leasing (21 vehicles), Ilyushin Finance (30), Sberbank Leasing (28), IrAero (20) also signed agreements on the acquisition of MS-10. Almost all buyers ordered the MS-21 with American Pratt & Whitney engines. At the moment, only Aeroflot has announced the purchase of 35 PD-14 engines for new mainline airliners.

The outlook for MS-21 sales abroad raises big questions. After the collapse of the USSR, the American-European duopoly of Boeing and Airbus took shape on the market of passenger airliners (sales of other manufacturers are of a piece nature). Several years ago, three new players announced their projects in this segment: Russia with the MC-21 project of the Irkut Corporation, China with the COMAC С919 aircraft and the Canadian Bombardier with the CSeries liner. Thus, by 2020, the number of major passenger aircraft manufacturers could increase from two to five. At the same time, Boeing and Airbus already in the 2016 - 2017 years will bring to the market the models Boeing 737Max and А320Neo, equipped with new highly efficient engines.

The engine has all the capabilities to saturate the domestic market.

The main technical characteristics of five competing airliners are at the same level. The main advantage of the MC-21 - capacity: 212 passengers in the MC-21-300 version. For comparison, the Airbus A320Neo indicator is 180 passengers, the Boeing 737 Max-8 has 189 passengers, and the Bombardier CS300 has 135 passengers. Also, the Russian plane will have an increased volume of luggage shelves, width of seats and aisle, which will allow for faster loading and unloading of passengers, as well as shorten the period of servicing the car at the airport. The new models of Boeing and Airbus do not have such advantages: they were not developed from scratch, so they inherited their predecessors' fuselages.

The engine has all the capabilities to saturate the domestic market.

Oleg Panteleev, executive director of the Aviaport agency, believes that the prospects for selling Russian MS-21 aircraft will depend on three key factors: the production capacity of assembly sites, the sustainability of cooperation in the supply of components, and the possibilities of promoting it to the world market.

While many Russian and foreign companies are not in a hurry to sign firm supply contracts for MC-21. This is primarily due to the fact that the planes have not yet passed the necessary preliminary tests, therefore, in many respects they exist only on paper.

Another major obstacle to the promotion of the project in the global MC-21 market is the lack of a developed after-sales service system. For example, buyers of any Boeing aircraft receive a warranty from the manufacturer for three to four years to repair the main components of the machine. The company also committed to delivering new parts to customers within 12 hours anywhere in the world. If the plane is serviced by the buyer on its own, Boeing fully compensates for the cost of repairs. The Irkut company cannot brag of such level of service yet. In the coming years, she plans to open MC-21 service centers in key cities in Russia and the CIS. To create the necessary infrastructure from scratch, serious capital investments are required.

Despite vague prospects for entering the world market, the MC-21 and ПД-14 projects still can be considered a breakthrough for the domestic aircraft industry. The state creates the necessary aviation infrastructure, establishes production links between enterprises, and stimulates the introduction of new unique technologies. In the long term, this will make it possible to make a serious step to enter the global civil aviation market.

Ctrl Enter
Noticed a mistake Highlight text and press. Ctrl + Enter
We are
Project Opel RAK. Experimental technology with rocket enginesProspects for the Russian aircraft engine industry
99 comments
Information
Dear reader, to leave comments on the publication, you must to register.