February 1 2016
60
In the thirties of the last century, Soviet gunsmiths actively worked on the creation of the first domestic self-loading and automatic rifles. The first result of these works, brought to mass production and use in the army, was the Simonov automatic rifle arr. 1936 g. - ABC-36. She managed to become one of the world's first self-loading rifles, put into service, and also remained in stories a real symbol of the appearance of a brand new weapons. Nevertheless, despite all the innovations, this rifle had to keep the bayonet inherent in weapons of previous generations.


In parallel with the creation of new weapons, experts studied the prospects of certain variants of the blades. After a series of studies, military and gunsmiths came to the conclusion that there was no point in the further development of needle bayonets that had been used for the past two centuries. A new weapon should be equipped with a bayonet with a wide blade unilateral sharpening. This version of the blade had a noticeable advantage over the needle design, and could also solve a wider range of tasks in addition to combat. Thus, a completely new bayonet of the original design was developed for ABC-36.

Calculations have shown that a relatively long bayonet with new fasteners is required for a new rifle. In fact, the new bayonet was a cleaver with unusual mounts for mounting under the barrel. The design of the new bayonet was divided into several main nodes that were connected during assembly. In addition, it offered a sheath for carrying a bayonet without installing on the weapon. Shooting was also allowed without installing a bayonet. 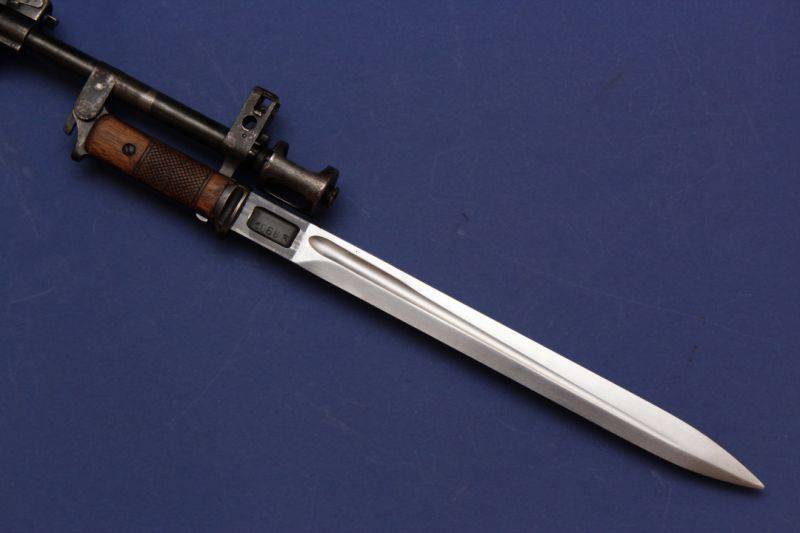 The main part of the bayonet for ABC-36 was a straight blade of great length with a symmetrical pointed combat end. Sharpening was carried out only on one side, which allowed performing piercing and cutting strokes. To ensure the required stiffness, the relatively long blade had down-sides on both surfaces, as well as rectangular recesses on the heel. A characteristic feature of the bayonet became oblique valleys, rising to the heel of the blade. On other similar bayonets of the time, the valleys ran parallel to the axis of the blade.

The blade did not have a rigid connection with the handle. Due to the use of the original system of fastenings to the barrel, the handle was made as a separate mobile unit. Thus, the back of the blade had a rectangular shape, and in place of the head of the handle there was a large hook, which was part of the blade. With it, the bayonet was supposed to be mounted on the trunk.

The handle was made in the form of an oblong metal frame box-shaped, on the sides of which there were wooden cheeks. On both sides of the frame there were elongated rear parts, made in the form of two-teeth locks. Like the blade hook, these locks should have been involved in fixing the bayonet in its place. In front of the handle frame there was another hook placed below its upper surface.

General view of the ABC-36 rifle. Photo of Wikimedia Commons

The frame of the handle was set on the blade and could move along it. In a special cavity between the frame and blade, in a slot inside the latter, there was a spring that increased the shear force of the handle. Due to this spring, the bayonet had to be held on the barrel.

Simonov automatic rifle arr. 1936 received relatively simple knots for fastening the bayonet. On the trunk, in front of the box and the gas tube, a special U-shaped bracket was provided, between the lower parts of which there was an axis for fastening the rear part of the bayonet. In addition, on the fly block, under the barrel, there was a ledge-tooth used as an additional attachment.

To install the bayonet on the ABC-36, the spring-loaded knob of the cold weapon had to be moved forward and, thus, opened its front fastening, and also pulled apart the rear hook and lock. Then the rear hook was hooked on the rifle clevis axis, and the front latch had to engage the tooth on the front sight block. After that it was possible to release the handle, as a result of which the bayonet turned out to be fixed on the weapon. In the closed position, the bayonet was located exactly under the barrel. The sharpened part of the blade was only in front of the barrel of the rifle, while under the muzzle brake there was an unfinished heel with characteristic rectangular grooves. 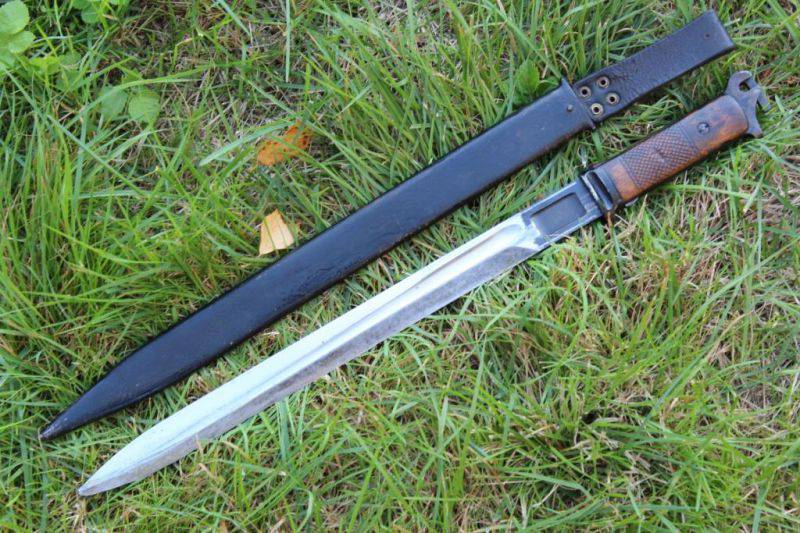 The bayonet and its scabbard. Photo Forum.guns.ru

For carrying the bayonet without mounting, a steel sheath was provided on the rifle, equipped with a pair of leather loops for fastening on the belt. Thus, the bayonet could be removed from the weapon and safely carried on the belt, and also, if necessary, used as a knife or a cleaver, aided by its shape and size.

The total length of the bayonet for ABC-36, including the rear mounts, was 450 mm. The blade had a length of 335 mm and a width of 25 mm. The bayonet with a scabbard weighed about 550 g, which did not have a decisive influence on the total weight of the rifle.

The new bayonet was put into service with the ABC-36 rifle in the 1936 year. Officially, he was referred to as a bayonet-arr. 1936 G. for the Simonov automatic rifle. Production of new weapons - both rifles, and, according to some data, bayonets for them - was deployed in Izhevsk. The first batch of serial rifles with blades were handed over to the troops before the end of 1936. 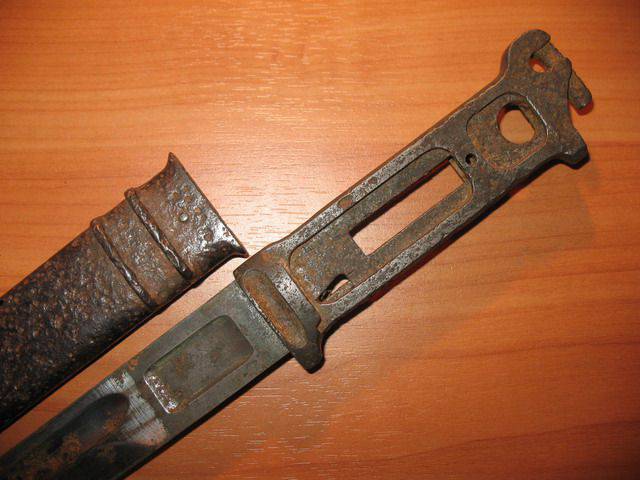 The bayonet handle without wooden elements and springs. The frame moving along the blade is clearly visible. Photo Nakop.ru

The new bayonet in hand-to-hand combat had to perform the same functions as its needle predecessors. It should be used when fencing rifles to defeat the enemy infantry. At the same time, new ways of using the blade were proposed. The form and method of sharpening allowed to use a bayonet as a knife for various needs, primarily household. In addition, with the incomplete use of fasteners, he was thought to have a positive effect on the accuracy and accuracy of shooting.

In the early ABC-36 rifle manuals, it was recommended that, if necessary, use a bayonet as a bipod when firing bursts from a prone position. To do this, it was necessary to install the bayonet in a vertical position, fastening only to the rear lock. The emphasis on the block fly is not used. In this position, the blade could rest on any surface and serve as an improvised one-legged bipod, to a certain extent increasing the accuracy of automatic fire.

Apparently, such use of the bayonet did not justify itself in practice, which is why the new guides to the rifle, already released in the 1937 year, were used to use the bayonet only for their intended purpose. According to some sources, the use of a bayonet as a bipod was not only forbidden with the help of appropriate instructions, but also physically excluded. It is alleged that for this purpose the design of the fixings was changed, however the details of these changes are not disclosed.

ABC-36 rifle and its bayonet. Photo of Wikimedia Commons

The serial production of Simonov automatic rifles started in 1936 and lasted until 1940. During this time, according to different sources, from 35 to 65 thousand rifles were released. The exact number of these weapons, for various reasons, remains unknown. All serial rifles were completed with bayonet knives of a new design, designed specifically for them. Thus, the number of serial bayonets was equal to the number of rifles released.

The ABC-36 rifle, despite a number of notable advantages over other weapons of that time, had a significant number of drawbacks associated with the imperfection of the design. Because of this, its production was difficult and expensive, and the operation in the army was accompanied by constant problems. With the advent of newer models, the Simon rifle was discontinued. The use of this weapon lasted for some time, after which all the remaining rifles went to the reserve depots or were disposed of. The same fate befell the bayonets for this weapon.

The Simonov automatic rifle had some flaws and therefore served only a few years. The bayonet for this weapon, in turn, could be considered a real breakthrough in its field. For the first time in domestic practice a bayonet was developed, originally proposed for use with a new weapon. In addition, of great interest was the original design of mounting a bayonet on a rifle. However, these interesting features of the bayonet could not have any impact on the future fate of ABC-36. This weapon was limitedly used for several years, including at the initial stage of the Great Patriotic War, but then gave way to more advanced models.