January 29 2016
7
Main rifle weapons Russian army during the First World War was the so-called. Russian three-line rifle arr. 1891, she is a rifle S.I. Mosin. This weapon was completed with a needle tetrahedral bayonet, which was a further development of the Berdan rifle bayonet. However, the Mosin rifle was not the only representative of its class in our army. In addition to it, other systems were also used, including those of foreign manufacture. So, in 1915, the Russian military issued an order to the American company Winchester for the supply of Model 1895 rifles chambered for 7,62x54 mm R.


In accordance with the Russian order, the American plant was supposed to produce about 300 thousand of M1895 rifles in an updated configuration. At the request of the customer, the rifles were converted to the Russian three-line cartridge, were able to be loaded using Mosin-Nagant clips, and also received an elongated barrel and box of the appropriate size, modeled on rifles of that time. In addition, it was necessary to equip the weapon with a bayonet, since it was used to use not only for shooting, but also in hand-to-hand combat. To install the bayonet under the barrel there was an influx, reinforced by an additional collar. The latter covered the trunk and the box. The rifle's improvements were quite complex and took too much time, due to which the first batch of weapons was sent to Russia a little later than the deadline. Together with the rifles in the Russian army went and new bayonets.

The Model 1895 rifle was not originally packaged with a bayonet, due to which the company-developer had to develop this device almost from scratch. After consulting with the customer, it was decided to abandon the traditional needle bayonet for the Russian army and use a bayonet with a wide blade with one-sided sharpening. Moreover, for greater convenience, the company "Winchester" decided to use an existing structure, slightly modified it for use on the new weapon.

The bayonet for the “Russian model” M1895 rifle was supposed to be an almost complete copy of the bayonet for the Lee Model 1895 rifle, previously produced by Winchester in the interests of the US Navy. This rifle was completed with a bayonet-knife with one-sided sharpening and the possibility of mounting on the front of the box and the barrel. When developing a new modification, all the basic details of the existing bayonet did not undergo any changes. Modifications undergone only the cross with the mount on the trunk.

The main element of the bayonet for the Winchester M1895 was the blade passing through the entire structure of the weapon. The blade had a symmetrical combat end, but it was only one-sided. On both side surfaces were provided with valleys. The bayonet handle consisted of two wooden parts mounted on the back of the blade with two rivets. Behind the wooden parts there was a metal head with a T-shaped groove for mounting on a rifle and a spring latch. In front of the wooden cheeks of the handle there was a cross with a slot for the blade in the lower part and a hole with a diameter of 16 mm in the top.

To install the bayonet on the rifle, the blade was placed parallel to the barrel, the blade forward. The cross ring was put on the muzzle of the barrel, while the head of the handle came into contact with the influx on the rifle barrel. When the bayonet moved backwards, a latch worked, which fixed the bayonet in the combat position. To remove it, one had to press a button in the head of the handle, which released the latch and allowed the detached bayonet to be moved forward, removing the crossbar from the barrel. 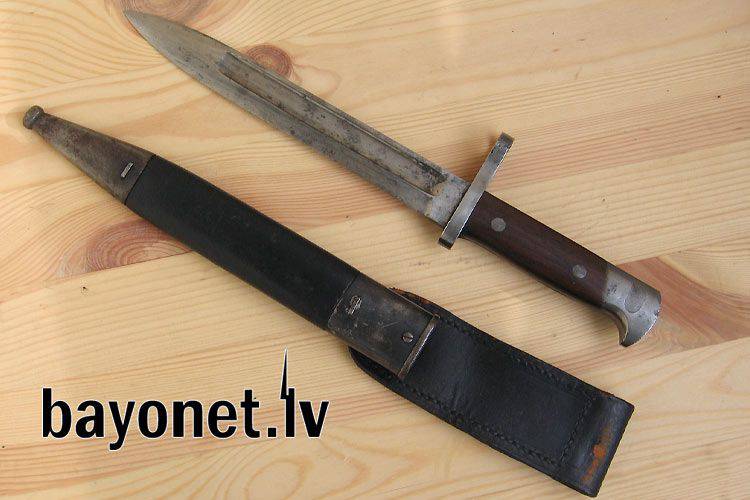 The bayonet of the first 8-inch version and the sheath for it. Photo Bayonet.lv

The total length of the first version of the bayonet was 325 mm, of which the blade accounted for 210 mm (8 inches). The maximum width of the blade does not exceed 26 mm.

Depending on the prescriptions, the bayoner for the Winchester M1895 rifle could be carried in a closed fighting position or in special sheaths. The latter had a metal case for the blade and a leather loop for fastening on a belt. If necessary, the bayonet could be used as a knife for cutting various objects and materials. Before the battle, respectively, it should be attached to the rifle for use in melee.

According to reports, only a small part of the Russian-style M18 rifles were equipped with 1895-inch bayonets. Such blades of relatively short length received only 15 thousand rifles of the first batch. It is noteworthy that in their number such bayonets could not compete even with relatively few blades for Lee M1895 rifles, which produced no more than 20 thousand units.

The handle of the bayonet and crosspiece with a hole for mounting on the trunk. Photo Gunscollecting.com

After making the first few batches with a total of about 15 thousands of rifles, the customer demanded to change the design of the bayonet. The short 8-inch knife did not fully suit the Russian military, which is why they wanted a longer blade. The result was the emergence of a new hatchet for M1895. All new rifles of this type for the Russian army until the very end of the release were supplied with updated long bayonets. The rifles themselves were not subjected to any modifications.

In terms of design, the new “long” blade differed from the old “short” only in size. All other features of this weapon, including the design of the handle and the mount on the rifle, remained the same. New rifles received a bayonet with a total length of 520 mm with an 400-mm blade with a width of 26 mm. The shape of the blade remains the same: it had a symmetrical pointed combat end and a rectangular middle part in contact with the crosspiece.

The design of the handle also has not changed: two wooden cheeks were fastened on a metal blade on rivets. The crosspiece was located in front of them, and in the rear part there was a head with a spring-loaded latch and a groove for mounting on a rifle. Like the “short” bayonet, the new one was supposed to be attached to the arms with the aid of a cross ring and a latch. 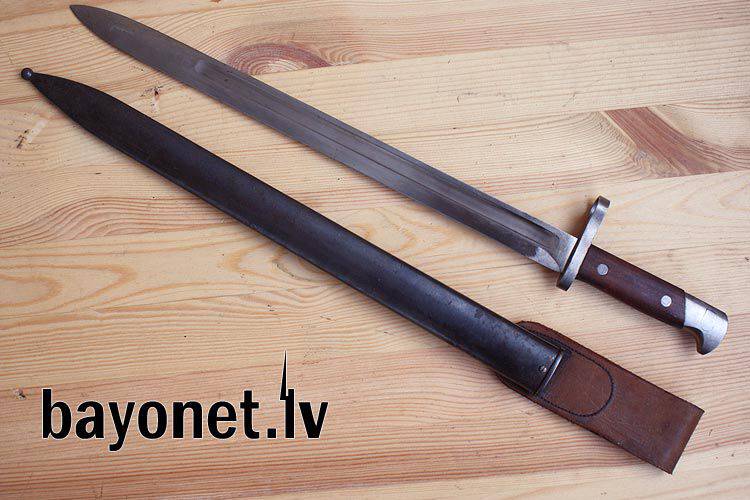 Later and the most massive "long" bayonet, as well as its scabbard. Photo Bayonet.lv

New bayonets also received sheath of metal and leather. The design of this product has remained the same, but the length of the metal part containing the blade has increased. Depending on the need, the blade could be transported in the sheath or on the weapon.

The extended bayonet knife for the Winchester Model 1895 “Russian model” had some advantages over the blade of the base model. Its length was comparable to the three-loader needle bayonet, which made it possible to dispense with the development of new methods of bayonet fighting. In addition, a large length of the bayonet gave some other advantages, both in hand-to-hand combat, and in some other situations, above all, you are domestic.

The first batch of American-made rifles, equipped with a "short" bayonet, was sent to the customer in 1915 year. Production and deliveries continued until 1917, after which the full implementation of the contract stopped due to a change in the political and economic situation in Russia. Before the Russian revolutions, Winchester managed to assemble and send thousands of M291 rifles in the “Russian” configuration to the customer about the 293-1895 order. The remaining rifles of the ordered 300 thousand were released after the refusal of the Russian side to accept and pay for new weapons. It should be noted that, despite all the difficulties and problems, the Russian order accounted for about 70% of the total number of rifles manufactured by the Model 1895 of all modifications.

M1895 rifle "Russian sample", the second version of the sheath in the sheath, cartridge pouches for cartridges and other accessories. Photo Guns.com

American-made rifles supplied in Russia with two types of bayonet knives were transferred to various units of the army, primarily stationed in the Baltic States and Finland. For example, a relatively large number of M1895 rifles were transferred to the famous Latvian riflemen. Those rifles that the manufacturer did not have time to pass on to the customer before the 1917 events of the year were sold on the American market. Thus, amateur shooters and various organizations became the new owners of “Russian-style” rifles.

M1895 rifles with two types of bayonets of different lengths were limitedly used during the First World War, and then used during the Civil War. Over time, these weapons became useless or were sent to warehouses as useless. It is known that in the mid-thirties, a number of American rifles were sent to Spain as an aid to Republicans. Probably, the Spanish fighters received not only rifles, but also bayonets to them.

Over the past few decades of the XIX century, Russian military leaders actively argued about the prospects for various designs of bayonets. The opinion was expressed about the need to switch to bayonet knives with the rejection of needle blades. This opinion even resulted in the production of a certain number of Berdan rifles, equipped with bayonet-bayonets, but the rest of the weapons were manufactured with needle-bayonets. The first Russian rifle, which initially received a bayonet and was equipped only with such blades, was the “Russian model” Model 1895, produced by the American company Winchester. Due to the relatively small amount of this rifle did not receive great fame, but still became a curious page in stories Russian small arms.