The formula for privatization "success": "We sell, while cheap and under sanctions!"

January 27 2016
93
In the Russian cabinet, with the start of 2016, they began to talk more actively about how to manage to fill the state budget more effectively in the current economic conditions. The discussions are certainly correct, although perhaps a bit late. But as you know better late than never Another thing: is it better? ..


Why suddenly there is such a skeptical question to those discussions that representatives of the domestic cabinet of ministers and a number of experts invited by them “from outside” (including representatives of the HSE, the Russian Academy of National Economy and the Public Service under the President of the Russian Federation, etc.) held about the filling of the Russian budget? The fact is that the main focus for filling the state budget with “real money” has been chosen (attention!) Privatization.

This word alone in most ordinary Russians causes allergic reactions and, to put it mildly, not the most joyful memories. In memory emerges, the “bright image” of young Anatoly Borisovich Chubais against the background of a poster with a “voucher”. Anatoly Borisovich, then, I remember, declared to the Russians that each “Privileged” check “guarantees” one, or even two, “Volga” “to the snout”. As a result, the majority of citizens for two "Volga", I'm sorry, the snout did not come out ...

This time, prominent economic experts are proposing to cut the assets of the largest Russian companies and banks (with large state participation) into pieces, and then sell off the weighty pieces. Allegedly, even now it will give some powerful impetus to the Russian economy. Well, yes, yes ... At the same time, it has already been announced that certain “large private investors” will become buyers of the assets of Rosneft, Sberbank and VTB. Allegedly, these investors are ready to invest in Russia, so that the Russian budget will literally overflow with income. 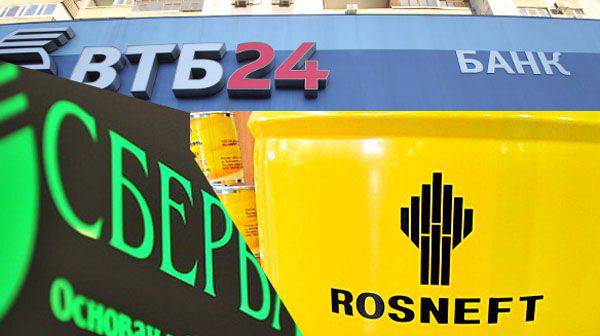 After such statements in television reports from the international economic forum in Davos, Switzerland, William Browder's smiling face flashed, as if hinting ... And she hinted at exactly who is ready to "invest" Russia today, acquiring the assets of the largest state-owned companies from her.

What, in this case, are those economists who have an alternative point of view of the government on how to fill the state budget with the necessary funds? They are worried that only, to put it mildly, a stupid business manager (if such a person can be called a business manager) can afford to sell a part of his property to some kind good uncle at a time when the prices for this property have dropped to levels close to the cost record. last time.

Take at least Rosneft. To sell even a part of its shareholding at the price of oil below 30 dollars per barrel and at the price of the company's shares "below the plinth" - what's this? Who in general could come up with such an "amazing" idea? After all, it is the same as to declare readiness to sell a house on the river bank and look for buyers at the moment when the flood has covered this house right at the windows ... Buyers can be found quickly, because the price will be actually worthless. There will be - they will get for a pittance, and then, when the “flood” subsides, they will get rid of the “house” - the asset is already at a completely different price, having previously brought its appearance into a salable form. And who will ultimately benefit from such privatization? There are many options that can be presented, but one thing is clear: it is certainly not the state that will win, and certainly not ordinary Russian citizens ...

Moreover, one should not forget that the need for the privatization of Rosneft, Sberbank and VTB is said against the background that economic sanctions apply to these companies themselves. Sorry generously, but ideas about selling the largest Russian assets against the background of existing Western sanctions (and large blocks of shares may well fall into the hands of those who imposed sanctions against Russian state-owned companies, directly or indirectly) do not even look like mismanagement, but rather resemble sabotage. There is even a question that someone might call unsubstantiated conspiracy: isn’t it for the purpose of sanctions against the Russian Federation that it was introduced that large assets that play a crucial role in the economy of a huge country be sold for a pittance? Hopefully, this is nothing more than conspiracy.

And now is the time to submit a statement by the Deputy Minister of Finance of Russia Alexei Moiseyev, published "Interfax":
Selling banks under sanctions is hard. But it turned out that there are certain options.

From this statement it becomes clear that in the so-called economic bloc there is not even considered the question of what is now economically meaningless to sell state-owned units in large companies. The main question is: how to get ready and quickly sell what is now extremely low in price - to the delight of the buyer ...

It should be noted that at this moment in the economic “valiant” block they are going to sell 19,5% of Rosneft shares and about 10% of VTB shares. And if in these two cases, after the implementation of the indicated percent of the mass of shares, the state will have at least some controlling stakes in hands, then it is even more fun with Sberbank. Sberbank has already been privatized at the root. The Central Bank still has a controlling stake in Sberbank after the last stage of privatization in 2012. It turned out that the stage was not the last, and therefore any new sale of Sberbank shares to private “investors” will automatically lead to the fact that the state will not have a controlling stake.

Does this hinder transactions from the point of view of the Ministry of Economic Development? Obviously not. To understand this, it is worthwhile to cite a truly outstanding statement by Mr. Ulyukayev (on privatization):
We have a hundred opportunities to resolve this issue. There is also a domestic demand for these assets. Sanctions, of course, are a nuisance. But there are technical possibilities even under the condition of the sanctions regime to conduct privatization deals.

It turns out that they are ready to sell, despite the fact that such a deal in the budget will only bring "glass beads" ... Ah yes, well done! You give new awards to economic gurus, because they care about the state, the people! ..

Ctrl Enter
Noticed oshЫbku Highlight text and press. Ctrl + Enter
We are
HSE Formula of Concern: “Either Caliber, or Education and Medicine”Agriculture and food security. Problems and Prospects
93 comments
Information
Dear reader, to leave comments on the publication, you must to register.