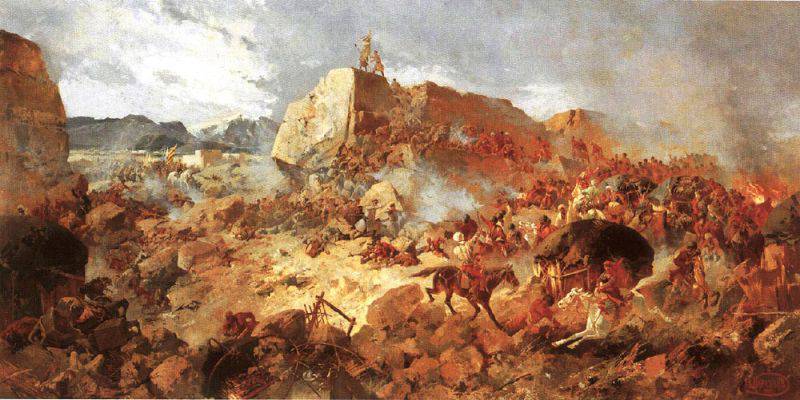 Somehow heaped in recent days historical dates related to the defense and capture of fortresses. Ours also noted: exactly 135 years ago, on January 24 (according to the new style) in 1881, the Russian expeditionary force under the command of General Skobelev, after a short 20-day siege, stormed the Turkmen fortress of Geok-Tepe. This event was a decisive moment in the conquest of Turkmenistan, since the main forces of the Turkmen army died in Geok-Tepe. After the fall of the fortress and the destruction of most of its defenders, the Tekin Turkmen no longer tried to engage in open battles with the Russian army.

And before that, Tekians had long fiercely resisted Russian expansion. A previous attempt to capture Geok-Tepe, undertaken by General Lomakin in 1879, was unsuccessful. The Turkmen fought off the assault, causing serious casualties to the attackers. Having experienced food shortages and suffering from the heat and constant partisan raids of the Turkmen cavalry, Lomakin’s army retreated. After that, General Skobelev, in an interview with the officers, said that Geok-Tepe ought to be “picked up and plowed”, hinting at the fate of Carthage.

The second attempt was prepared much more carefully. "The White General" before the campaign created four-month food supplies and ammunition, and for a more effective reflection of cavalry attacks he borrowed from fleet battery mitrallosis. In order to supply troops from the Caspian coast to the interior of Turkmenistan in 1880, a railway was laid that became the first railroad in the region.

Skobelev's army consisted of 7100 men, including about 4800 infantrymen and sappers, 1060 cavalrymen and 1100 gunners with 58 guns, 16 mortars, 10 rocket launchers, and four Farrington mitrals. Almost the entire population of the Akhal-Teke oasis was hiding in the fortress - from 40 to 50 thousands of people. It is not known how many of them were warriors, but according to Turkmen traditions every man was obliged to fight from childhood to old age. The number of armed fighters in different sources varies widely, from 15 to 25 thousands, but only five to six thousand had firearms. weaponmainly - flint and wick caramel There was also one old cannon and two zembureks - small falconet pack bags.

Geok-Tepe itself was a large steppe area, surrounded by a rather high and thick mud wall with a parapet and prominent semicircular bastei, inside which approximately 15 thousands of yurts and a tent were randomly located. The Tekins were nomadic and did not build capital dwellings.

During the three weeks of the siege, Russian artillery made several gaps in the wall on the south side of the fortress, and the sappers dug an underground gallery and laid a big mine. Turkmens discovered the undermining of the sounds of works, but their ignorance of mine war let them down. They thought that the infidels were going through the underground passage to break into the fortress, therefore behind the wall, near the place of the supposed end of the tunnel, several hundred armed fighters were constantly on duty. Naturally, when the mine worked, they, together with the wall, flew into the air.

In the breach, made by the explosion, and in the gaps punched by guns, assault columns rushed under the command of Colonels Kozelkov, Kuropatkin and Lieutenant Colonel Gaidarov. Resistance demoralized defenders did not last long. Soon the Turkmen, abandoning their tents, wives and children, fled through the northern gate. Russian cavalrymen pursued and cut down ruthlessly fleeing, until the horses were exhausted. According to eyewitnesses, the steppe for 15 versts was littered with thousands of corpses.

The Turkmen who died in the capture of Geok-Tepe were not even approximately counted. Usually, numbers from 8 to 15 are called thousands, and this number also includes women, many of whom put up armed resistance. The losses of the Russian army are calculated more accurately - 54 killed, 254 injured and 90 shell-shocked, as well as 70 killed horses. More than 500 slaves were freed in the fortress, 12 thousand tents and various property worth six million rubles were captured. A week later, Russian troops occupied the Turkmen capital, Askhabat, without a fight. Transcaspian region became part of the Russian Empire. 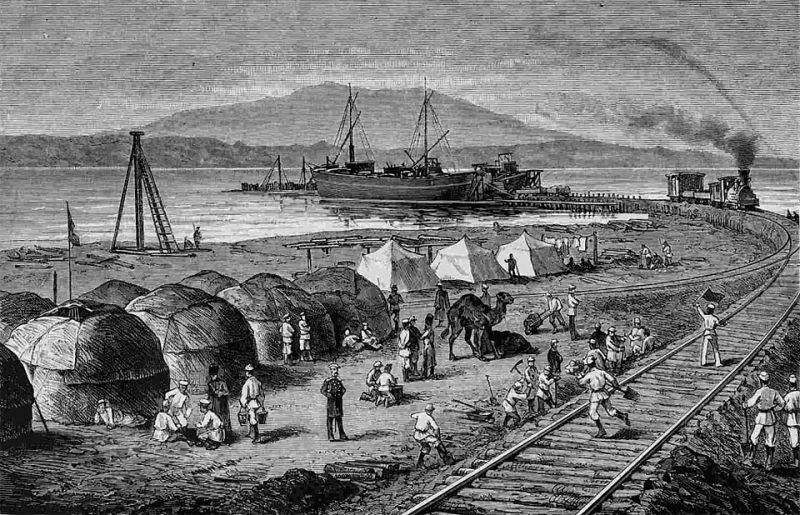 The beginning of the Transcaspian railway, built to support the Turkmen campaign of the Russian army. 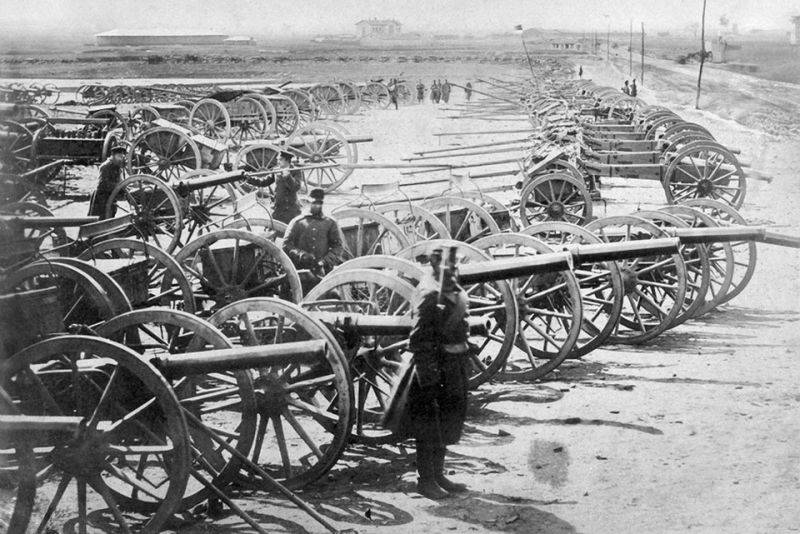 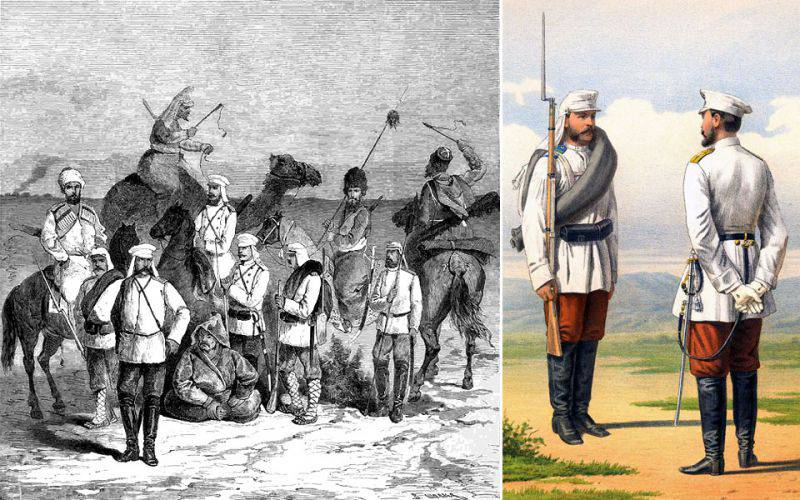 Uniforms Russian soldiers, officers and Cossacks who fought in the XIX century with the aborigines of Central Asia. Please note that some soldiers are wearing sandals, which are more comfortable, although less durable shoes than boots, in conditions of deserts and hot climates. 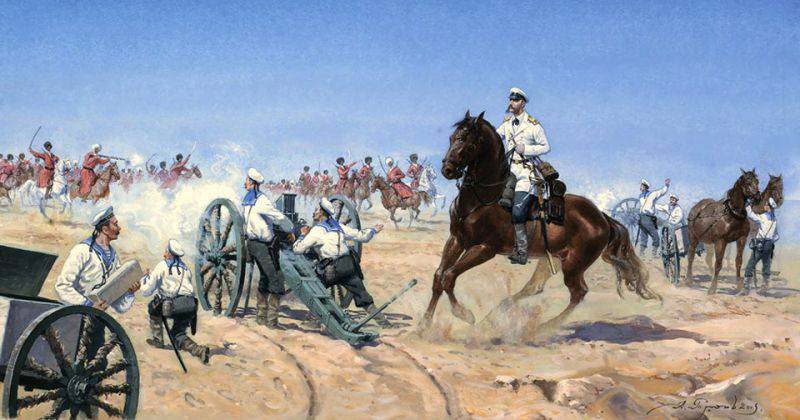 The battery mitralie reflects the attack of the Turkmen cavalry. These "light machine guns", which took part in the Sokolev's Geok-Tepinsk expedition, were served by military sailors. 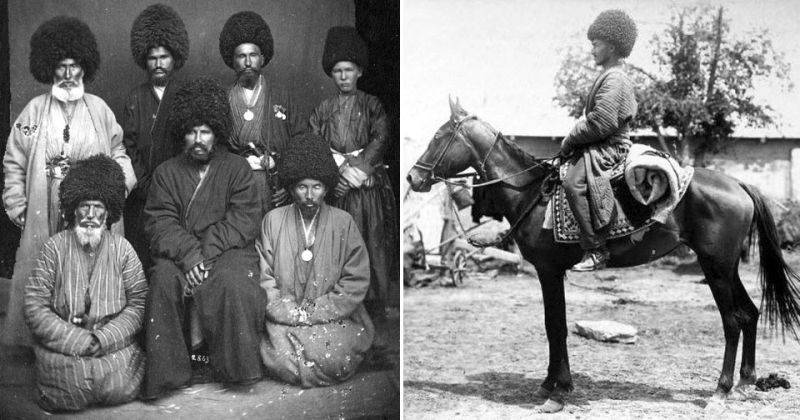 Left - surviving members of the defense of Geok-Tepe, photographed through 15 years after the capture of the fortress. Right - Turkmen tekinets on a horse. 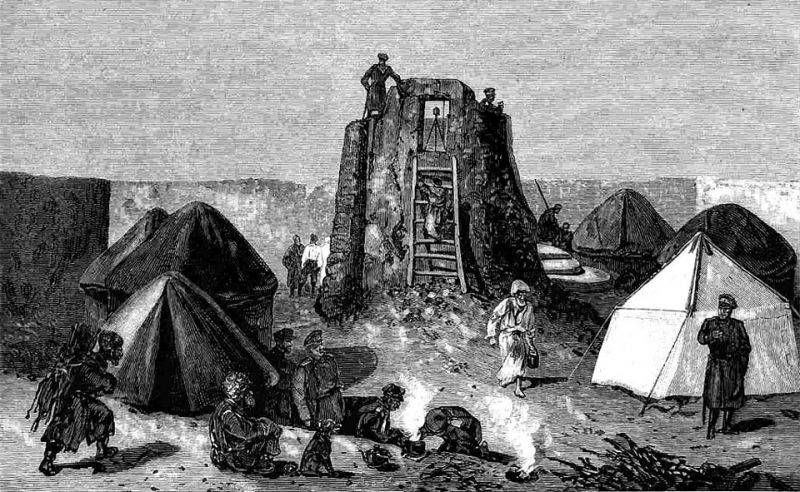 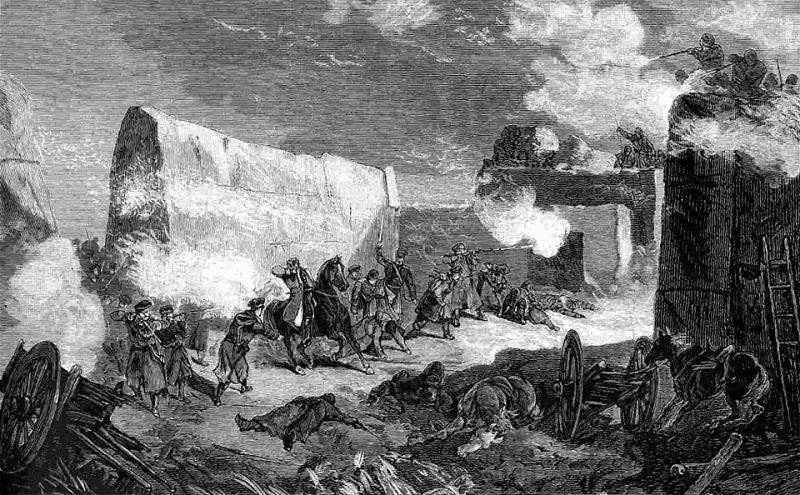 Break into the fortress of one of the attacking columns. 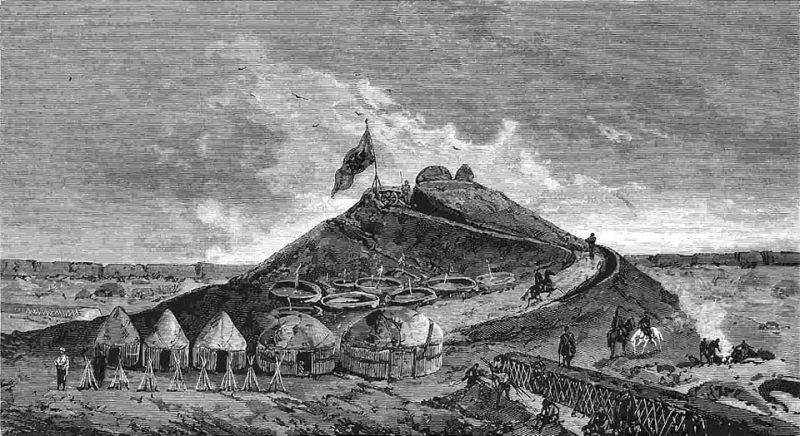 Russian flag over the Dengil-Tepe mound - the last center of defense of the defenders of the fortress. 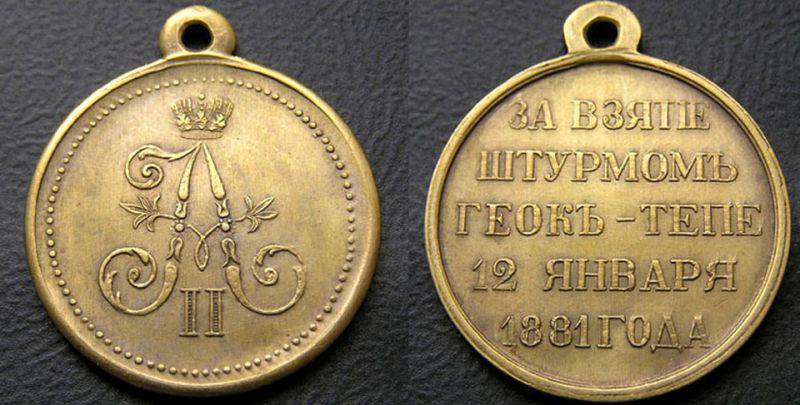 Bronze medal for ordinary members of the assault. The officers were awarded the same medals, but minted in silver, and the generals in gold. 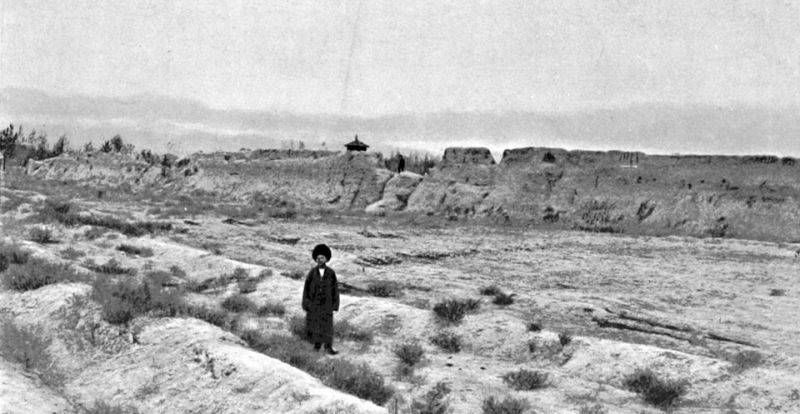 Remains of the clay wall Geok-Tepe. Snapshot 1896 of the year. 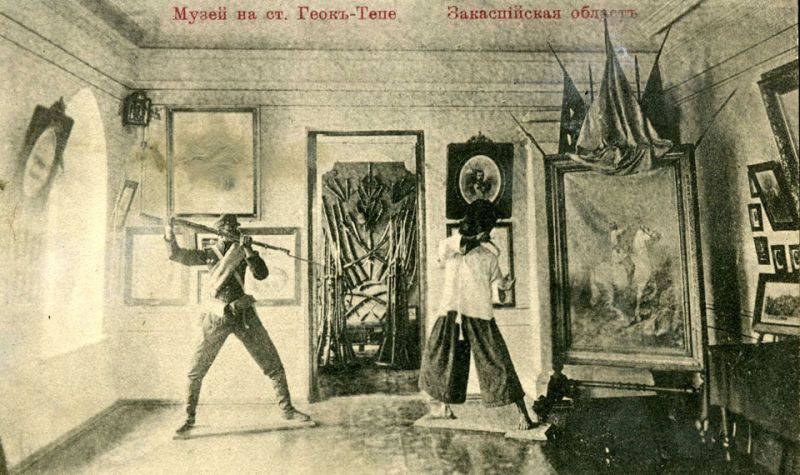 The interior of the museum of the Geok-Tepe assault museum, opened at the end of the 19th century and looted during the civil war. 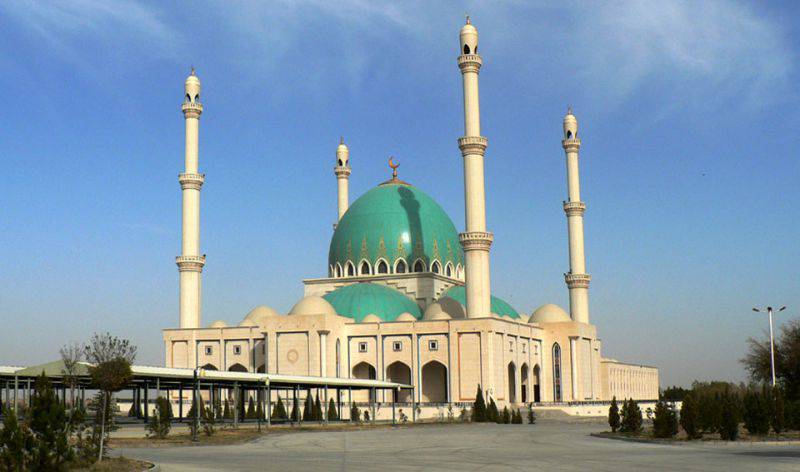 In 1995, on the site of the former fortress, on the orders of the beloved father of the Turkmen people Saparmurad Niyazov, the French company Buig built a giant mosque dedicated to the memory of the fallen defenders of Geok-Tepe, but called the Saparmurad mosque. And the monuments to the Russian soldiers and officers who died during the conquest of Turkmenistan were destroyed in Soviet times.

Ctrl Enter
Noticed oshЫbku Highlight text and press. Ctrl + Enter
We are
22 June. Brest Fortress. Battle Reconstruction"White General". To the 170 anniversary of the birth of the outstanding Russian commander Mikhail Dmitrievich Skobelev
71 comment
Information
Dear reader, to leave comments on the publication, you must to register.