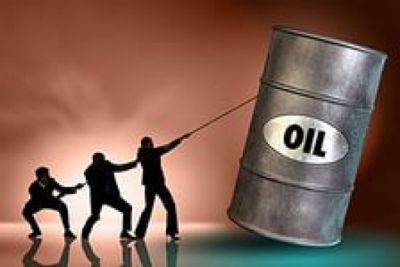 Vladimir Putin explained that oil prices are falling because of its overproduction, as well as because of "problems" in China. Valentina Matvienko has a different opinion: she stated that at a low price there is a “man-made factor”, namely “a political component”. As for Western experts, some of them do not believe in the low price of oil ... Bank Goldman Sachs, for example, does not abandon its forecasts, according to which in the first half of this year the price of a barrel of oil will be 40 dollars. In addition, some oil-producing countries are threatening to cut oil production.


At a meeting of the inter-regional forum "ONF", Vladimir Putin said that the fall in oil prices is due to its overproduction. He also linked the fall in prices with "problems" in China.

“China is our partner, ally, we have very good relations with them, with the Chinese, but unfortunately, you know, and they now have problems, their growth rates are seriously suffering,” the president quotes. RIA News". - From this, due to the fact that the volume of the economy and the world economy is shrinking, and the cost of a barrel of oil depends on it: because of the overproduction of this fuel, it is not consumed by today's economy in the way economists thought before. This is one of the reasons for today's difficulties. ”

So, the wise Russian authorities made a discovery: oil "is not consumed by today's economy in the way that economists thought before." The trouble is overproduction.

Amazing explanations of these economists! They would read books on the good old political economy. There, both “overproduction”, and “overstocking”, and “crises of the capitalist economy” are constantly mentioned. Whoever remembers just a bit of Marx knows that: a bearded theorist of communism believed it was overproduction that was the cause of economic crises. Marx's theses moved to the Soviet economic textbooks, where the term "overproduction" was also often used. In the 21st century, Marx became popular again, and not only in Russia, but also in the West. And not because of the unconvincing sermons of communism, but because of the logical explanation of the permanent crises of capitalism.

Tov. Marx, moreover, taught (in general) that the crisis essentially constitutes a “rebellion” of the productive forces against production relations: the productive forces need not market management, but planned ones, which imply state, and then, under communism, national ownership of the means of production. Later Keynesian theory borrowed something from Marx: in times of serious crises, “bourgeois” rulers, including in the USA, successfully resorted to government intervention in the market, deviating very far from the liberal ideas of Adam Smith and his followers.

As for the current Russian politicians at the helm, not all of them believe in overproduction alone. When it comes to oil, some talk about the political component of the current crisis.

For example, speaker of the Federation Council Valentina Matvienko in an interview "Tape.ru" said that there is a political component in the formation of low oil prices. We quote:

“Unfortunately, the ruble exchange rate depends on oil prices. But I am inclined to support the opinion of a number of serious analysts who assert that there are no weighty reasons for such a low price for hydrocarbons. Yes, there are objective factors - a slowdown in the global economy and, accordingly, the level of oil consumption, a slowdown in China’s economy. However, there is also a man-made factor - I mean the political component. ”

What is such a "component"?

Lenta.ru did not receive a direct answer, the journalist had to be satisfied with indirect, containing a hint of overseas enemies:

“I remember that in the times of the Soviet Union, US President Ronald Reagan said that if we lower the price of oil to ten dollars, the economy of the USSR will collapse ...”

And those who arranged the political component added the work of the Russian rulers:

"And now we, the executive and legislative authorities, are forced to jointly prepare various scenarios for adjusting the budget, taking into account the further possible fall in the price of oil."

A slight increase in the price of "black gold" still ventured to predict the Minister of Economic Development of Russia Alexei Ulyukayev. In his opinion, the average annual price of oil in 2016 will be higher than 30 dollars per barrel. This will occur due to some increase in demand.

“The potential for recovery in them [oil prices] will be. Growth in demand is a fact; in 2015, by 1,5 million barrels the demand increased. The global economy has grown by 3%, which means that demand will surely grow, ”they are quoted as saying. "Vedomosti".

Amazingly, the western enemies of Russia are far more optimistic in the oil issue than the Russian soothsayers.

For example, the famous American investment bank Goldman Sachs believes that in the first half of 2016, the price of oil will be 40 dollars per barrel. Moreover, for oil, a “new bull market” is predicted from the end of 2016, due to a correction in the market equilibrium of supply and demand.

1. The forecast for 40 dollars is based on unfilled volumes of oil storages. The increase in oil supplies creates additional demand for oil storage facilities, which leads to an increase in prices and contributes to the emergence of proposals for storage services.

2. The mentioned “bull market” starts at the end of 2016 of the year. Oil production at current prices in few places in the world can make a profit. At current prices, analysts say, companies do not make money on oil. But they continue to work, hoping for a change in the situation. What happens next? Either the companies run out of money for operating expenses, or they lose hope. Experts probably conclude that a combination of both factors will balance the markets.

There is an even more optimistic outlook for the oil market. And he also came from the USA.

American trader Pierre Anduran, previously famous for accurate predictions of world oil prices, predicted a growth in quotations in the next two years.

In an interview with television channel "Bloomberg" Mr. Andyuran said that the market has reached the bottom, and quotes will grow. According to him, in 2016, a barrel will cost 50 dollars, in 2017 - 70, in 2018 - even 90. The period of low prices this trader estimated maximum in 6 months. “We live in a world where low oil prices replace high ones. I really think that now the market has reached the bottom ", - quotes him RBC.

According to the trader, there are now many reasons for predicting a long-term trend for quotes growth. This includes the bankruptcy of a number of oil companies in conditions of low prices.

Finally, the March meeting of OPEC is expected.

How 12 reported on January TASS With reference to France Press, Nigeria’s Minister of Petroleum, Emmanuel Ibe Kachikwu, who chairs OPEC, called for convening an emergency summit of the organization in early March. The main objectives of the meeting, he said, is to revise the pricing policy of the cartel and even change the strategy of OPEC (if necessary).

Probably, the cartel members, as well as Kachikwu himself and OPEC Secretary General Abdullah Salem al-Badri, are experiencing a real panic. This is evidenced by Kachikva’s emotional utterance, which Interfax: “I just hope that the price of oil will not fall below $ 30 per barrel, in the name of all that is holy. I think it is worth waiting for the situation to deteriorate before it improves. ”

Panic in the ranks of OPEC is confirmed by informal negotiations with non-oil producers, including Russia. Cartel states are already conducting these negotiations, discussing the possibility of reducing production in the future in order to maintain oil prices. This was said by Kakchku himself.

Undoubtedly, the decision to reduce production by OPEC countries, if only it will be made in early March, will also affect the price of "black gold".

Decisions to reduce production in the coming days can be made by those countries that are not included in the cartel.

The Sultanate of Oman is ready to cut oil production by 5-10% to support oil prices in the market and encourages other countries to follow his example. This was stated by the Minister of Oil of Oman, Muhammad bin Hamad Al-Rumhi.

According to him, which leads Rosbalt, oil production in the country reaches almost a million barrels per day, and the state does not plan to increase the figure in 2016.

Thus, we’ll add, the trends of the oil market may break in the coming year. Western experts, unlike some Russian politicians, do not see any “political component” in the relative cheapness of oil. The bankruptcies of American companies that extract shale oil also refute this hypothesis.

American experts, adhering to not Marxist, but quite liberal economic views, believe that the market is fully capable of adjusting itself, and hope that the recession will be replaced by a rise. True, their confidence does not guarantee the end of an era of capitalist crises. Overproduction remains overproduction.

Observed and commented on Oleg Chuvakin
- especially for topwar.ru
Ctrl Enter
Noticed oshЫbku Highlight text and press. Ctrl + Enter
We are
BRICS: Captured by the American dollar?Engineering Technologies-2012. The first days of the forum
156 comments
Information
Dear reader, to leave comments on the publication, you must to register.