How the first navy charter appeared in Russia 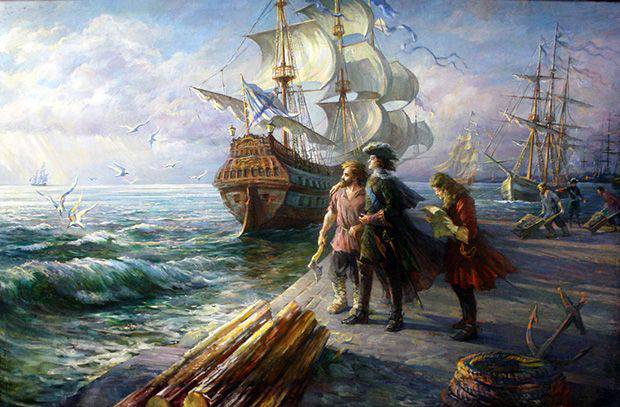 On January 24, 1720, Peter I signed a manifesto on the introduction of the “Charter of the Sea on everything related to good governance when you’re fleet on the sea"
The emergence of a full-fledged navy, Russia is obliged to its first emperor, Peter I. But there is a considerable proportion of imagery in this statement: after all, the Tsar did not build each new warship with his own hands! But in the words that our country owes him and the first naval charter, there is no stretch. Peter I worked on this document on 14 hours a day and in fact was its main author.

It cannot be said that, before Peter, no efforts were made in Russia to build a military fleet - just like attempts to create a Russian naval charter. The first experience of both of them was the actions of Tsar Alexei Mikhailovich. In accordance with his order, the first Russian warship, the famous Eagle, was built on the Oka, specially created for this shipyard, and its first captain, the Dutchman David Butler, compiled the Ship Sailing Letter. The document submitted by the Ambassadorial Order, written by the Dutchman, was in fact a brief, but very capacious version of the sea charter — one that was quite suitable for a single ship. In essence, this “Letter” was an extract from the Dutch Navy charter and dealt almost exclusively with the combat readiness of the ship and the battlefield. For the present navy, which was to become a serious force for Russia, such a document was obviously not enough. The same as the other two: again, written by Peter I "Decree on galleys on the order of maritime service" (1696 year) and created on his order by Vice-Admiral Cornelius Cruys "Rules of service on ships" (1698 year). In 1710, on the basis of the Cruises' charter, “Instructions and articles of the military to the Russian fleet” appeared. But this document, which actually performed the role of the maritime charter, was not fully implemented, since it did not cover all the important issues of the maritime service. And only ten years later, Russia gained its first true naval charter.

On the title page of the first edition of the Charter of the Sea there was an inscription “The Book of the Charter of the Marine, in Russian and Gallic, about everything that concerns good governance when the fleet was at sea. Printed on the command of Tsarist Majesty in the St. Petersburg Summer of the Lord 1720 Printing Works, April in 13 day. " And the January manifesto of Peter opened the publication, which stated that “And, as a matter of fact, the State needs the necessary thing (that is, if any Potentate, of which only the land forces have, has one hand, and has) , that for the sake of this military naval charter was perpetrated so that everyone would know his position and no one would dissuade him with ignorance ... Everything was done and accomplished in St. Petersburg, 1720, Genvar in 13 day through our own work ”.

The Tsarist manifesto, in which, as Peter the Great often managed to do, goals and objectives, as well as the need to create and introduce the Naval Charter in Russia, were formulated clearly and clearly, followed by the “Preface to the Well-Willing Reader”, which in great detail, with numerous digressions and quotations from the Holy Scripture told about stories the formation of the Russian army and the need to create a Russian navy. 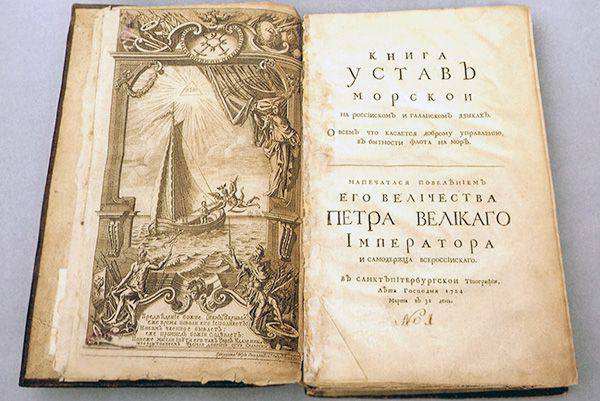 Publication of the first sea charter. Photo: polki.mirpeterburga.ru
After the preface, which occupied a dozen pages - from the second to the eleventh, - the actual text of the sea charter, consisting of five parts, or books began. The first of them was opened by an indication that "Must everyone, both higher and lower in our fleet, first come to the service of the oath of allegiance as follows: and when they do, then he will be accepted into our service." Below was the text of the oath for those entering the naval service, who was asked to clarify “how to oath or promise to repair”: “Put your left hand on the Gospel, and raise your right hand up with two large fingers stretched” (i.e. index fingers and middle fingers ).

Behind the text of the oath there was a brief explanation “On the fleet”, which began with the words “Fleet is the word French. This word means, of course, a multitude of waterborne vessels marching, or standing, both military and merchant. ” The same explanation explained the composition of the military fleet, introduced the concept of commanders of squadrons of various flags, and also signed a list of ships of different classes depending on the number of guns on each. This painting was called “the Regulations perpetrated according to the ranks of the ships, how many what ranks of people should be on the ship of what rank”. It is noteworthy that according to this table, captains - and this word here meant rank, and not a position - could only serve on ships that had at least 50 guns. The 32 guns were commanded by lieutenant commanders, and the 16 and 14 guns were commanded by lieutenants. Ships with a smaller number of guns in the sheet and was not provided at all.

After the explanation “On the fleet” and the “Regulations”, the main provisions of the first book of the charter - “On the General-Admiral and any full-time commander”, on the ranks of his headquarters, as well as articles defining the squadron tactics were presented. The second book was divided into four chapters and contained resolutions on the seniority of ranks, on honors and external differences of ships, “on flags and pennants, on lanterns, on salutes and flags of trading ...”. It was in this second book that the famous norm was contained, which the followers of Peter I interpreted and interpreted as a direct ban on the descent of the Russian naval flag to anyone: “All Russian warships should not let down flags, wimples and Marseilles, under the penalty of depriving the abdomen. "

Book three revealed the organization of a warship and the duties of officials on it. It was opened by the head of “About the Captain” (the ship’s commander), and ended with the head of “About the Profos”, which was 21. Between them there were chapters defining the rights and obligations of the overwhelming majority of ship officers, who were responsible for more than just fulfilling the orders of their superiors, from captain-lieutenant to cupola and carpenter, from ship's doctor to ship's priest. Defining their duties, the charter also determined the tactics of the ship in battle, and not in a single, but as part of a squadron, primarily in line with other ships.

The fourth book consisted of six chapters: "On the good behavior on the ship," "On the officers' servants, how many people should be," "On the distribution of provisions on the ship", "On the award ceremony" ("So that every servant in the fleet would know and be trustworthy than for which service will be awarded "), as well as" On the division of production "and" On the division of production from prizes not military. " The fifth book was called “On Fines” and consisted of 20 chapters, representing judicial and disciplinary statutes under one cover.

Ctrl Enter
Noticed oshЫbku Highlight text and press. Ctrl + Enter
We are
For the Navy Day. At the dawn of the Russian fleetRusso-Japanese War 1904-1905's. State of the Russian fleet. Bad luck and missed opportunities
5 comments
Information
Dear reader, to leave comments on the publication, you must to register.