As the Black Sea coast opened an account torpedo attacks 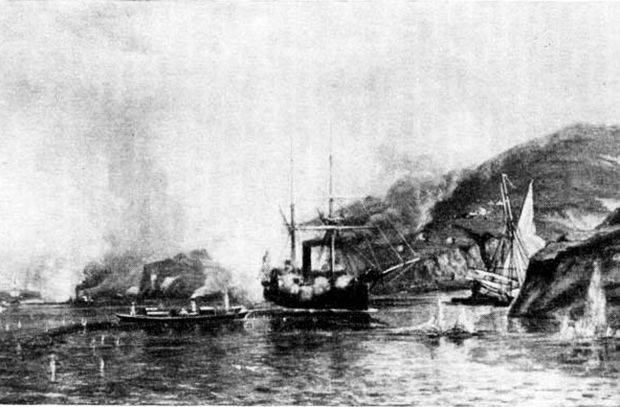 26 January 1878, the Chesma and Sinop mineboats for the first time in stories sank the enemy ship using torpedoes

The honor of developing the first battle torpedoes belongs to the Englishman Robert Whitehead, they were even officially called “Whitehead mines”. But the honor of the first successful torpedo attack belongs to the Black Sea sailors, who during the Russian-Turkish war 1877 – 1878 turned the novelty into a formidable weapon.

But at first the mine war did not seem to the highest ranks of Russian fleet worthy of attention. The practical value of torpedoes was not yet known, by that time not a single fleet in the world had a real experience of their use, and classical tactics required completely different actions and other ships. But Russia did not have them on the Black Sea: the Paris Treaty of 1856, which ended the Crimean War, forbade having a navy in those waters. And although in 1871 the treatise was canceled, for six years Russia did not physically manage to recreate the Black Sea Fleet. By the beginning of the last Russo-Turkish war, it consisted of only two "popov" - unique round artillery coastal naval battleships, five steamship frigates and corvettes, and three dozen auxiliary vessels. And Turkey had 15 battleships, five screw frigates, 13 screw corvettes, eight monitors, seven armored gunboats and about eight dozen auxiliary small vessels in the Black Sea.

To combat this threat, new effective methods were needed that could hit the enemy in the literal and figurative sense of the word. And young lieutenant Stepan Makarov managed to find them: he relied on a mine war, proposing to use high-speed steamers - carriers of mine-boats. These babies could be quickly launched (the mechanism that allowed them to do it in seven minutes was also a Makarov design) and at night they could hunt Turkish vessels on open raids.

Makarov not only put forward the idea of ​​a mine war, but also clearly substantiated it by proposing a carefully developed plan, but did not accept it immediately. Only at the end of 1876, he received approval, and at the same time a restless sailor was made responsible for the implementation of his plans. December 13 Makarov was appointed commander of the steamer "Grand Duke Konstantin", hastily converted into a mine transport, and on December 26 his order was issued to enlist four steam mines and assign names to the lists of weapons. Of these four, only one boat, the Chesma, was new, built like a mine. The second, Sinop, was previously surveyed (that is, hydrographic), and two more — Navarin and Miner (later renamed Sukhum) —was traveling on other ships. 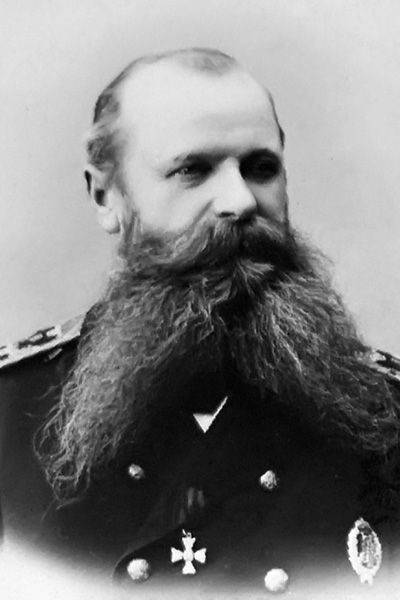 Stepan Osipovich Makarov - Russian naval leader, oceanographer, polar explorer, shipbuilder, vice-admiral. Photo: wikipedia.org
Proving the effectiveness of the idea, the commander of the mine transport "Grand Duke Constantine" from the very beginning of the war began an active attack. At first they used pole and towed mines, having achieved, although not immediately, noticeable success. And on the night of December 16, 1877, mineboats for the first time attacked the enemy with the help of “Whitehead self-propelled mines”. Shortly before that, Makarov was hardly able to get four torpedoes from among those purchased by the Marine Department in 1876 to be placed at his disposal. This is not surprising: for the purchase from Robert Whitehead of the “secret of the device of the automatic fish mine invented by him” and a batch of a hundred torpedoes, the treasury paid 9000 pounds sterling - very substantial money at that time!

These four "goldfish" Makarov and his officers used with maximum sense. According to the reports of the Russian sailors, during the first attack, they managed to damage the battleship Mahmudiye who was standing on the Batumi roadstead (the Turks first reported that they had picked up the torpedoes passing by ashore, and only two years later recognized the fact of their hitting the ship). And on the night of January 26 (in a new style) 1878, the Black Sea people torpedoes sank the Turkish steamer “Intibah” by two torpedoes, which according to the classification of that time belonged to gunboats.

Let's give the right to tell about the attack to the lieutenant Izmail Zatsarnen who headed it, the commander of the Chesma. Here is an excerpt from his report: “... Having fallen off the side of the steamer, the boats went in the indicated direction to the Batumi raid ... Going to the patrol vessel ... I gave the smallest turn and from the 40 – 30 saar. fired by Whitehead’s mine, while Lieutenant Scheshinsky (commander of Sinop. - RP) fired his mine. The two at the same time explosions to the starboard side, mine in the direction of the mainmast, and Shcheshinsky to the right, raised a tall and wide black pillar of water at half a distance, a terrible crackling sound was heard, and the steamer, tilting on the right side, completely disappeared under water in a minute, and then and the masts were not visible, and only a large circle of debris indicated the place of his death; the friendly "cheers" of the boats informed the enemy squadron about the sinking of his watch-boat ... At the beginning of 4 hours, the boats landed on board the ship "Grand Prince Constantine". During the attack, the behavior of the teams of both boats was flawless. ”

Two days later, the commander-in-chief of the Black Sea Fleet and ports, Vice Admiral Nikolai Arkas, signed Order No. 31: “Yesterday I had the good fortune to receive a telegram from His Highness Admiral General:“ The Sovereign entrusts you with his royal thanks to the commander, officers and crew of the ship ” Konstantin ", Makarova favors his aide-de-camp, Zatsarogo - the next rank (lieutenant commander - RP), and Scheshinsky with St. George cross of the 4 degree. Congratulate them on this new royal favor with me and tell them how proud I am yt Admiral General in such seafarers'. "

About their destinies should be told separately. Stepan Makarov has become one of the most famous Russian sailors, whose name even today bear ships and naval academies. He rose to the rank of vice admiral, became famous as the developer of the unsinkability theory and pioneer in the use of icebreakers, and died 13 on April 1904 of the year along with the battleship Petropavlovsk, hit by a Japanese mine.

Izmail Zatsarenny, who was born in 1850 and graduated from the Marine School in 1870, made the first voyage under the command of Makarov on the schooner "Tunguz". In 1877, he graduated from the Mine Officer Class and voluntarily went to the Black Sea to put new knowledge into practice. In less than two years, Zatsarnyi managed to earn the Order of St. George of the 4 degree, the Order of St. Vladimir of the 4 degree with swords and a bow, as well as St. George’s weapon with the inscription “For Bravery”. In 1880, Lieutenant Captain Zatsenny received the new battleship Batum in England and after two months sailing brought him to the Baltic, in the same 1883 – 1886 served as a senior officer of the armored frigate Dmitry Donskoy, and after another year - the commander of the Battleship ". In the spring of 1887, he fell ill and died in November. The mine cruiser of the Black Sea Fleet "Lieutenant Zatsarenny" was named in honor of the famous sailor, which entered service in 1909 year.

Polish nobleman Otto Sheshinsky, born on 1847, served until 1905. For the first December attack on the Batumi roadstead he was awarded the Order of St. Vladimir 4 class with swords and bow, for the sinking of the steamer "Intibah" - the Order of St. George 4 class. In 1879, the captain-lieutenant resigned from the service "due to domestic circumstances", and seven years later he returned to the sea. In 1889, he took under the command of the destroyer Libava, in 1894-m - the mine cruiser Posadnik. In 1902, Shcheshinsky was transferred from the Black Sea to the Baltic, where he commanded the 19 fleet crew for a year, then retired with the assignment of the rank of rear admiral and the right to wear his uniform and died in 1912.

Ctrl Enter
Noticed oshЫbku Highlight text and press. Ctrl + Enter
We are
Steam tractors in the Russian-Turkish war 1877 - 1878Russo-Japanese War 1904-1905's. State of the Russian fleet. Bad luck and missed opportunities
7 comments
Information
Dear reader, to leave comments on the publication, you must to register.