Why is it funny when eagles scream? About plans to send American paratroopers to Iraq

January 27 2016
69
Washington generals, no matter how sad it is to write about the military, still more politicians than officers. Maybe because Washington? Pencils, equal! Computers, attention! And the service went. Opened the folder - the general, the folder closed - the official. Only in shape. 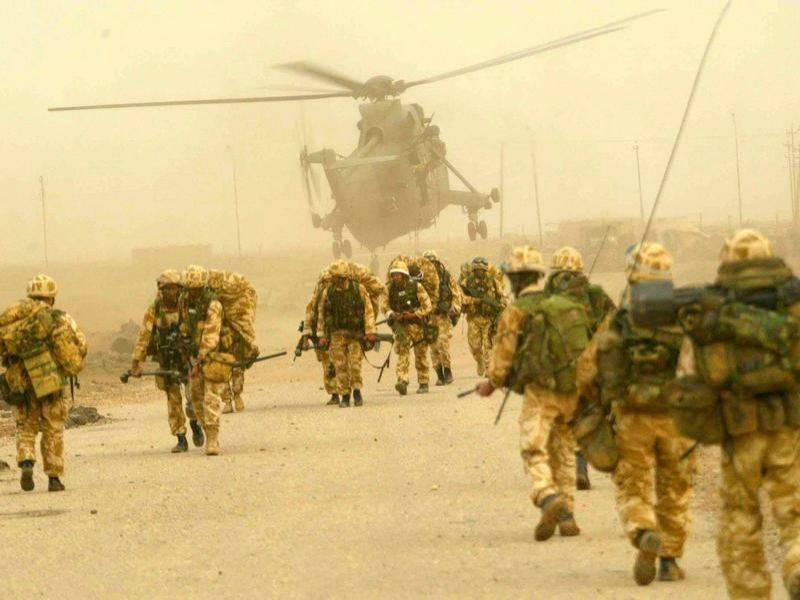 Today I called one of our readers. And the question asked was interesting. What kind of 91-I have appeared in the United States? And why is it elite? Well, and then, so to speak, by profile. I had to answer that no new divisions were formed in the USA. 91 is not present since 1945. And the error just crept into the message. Not 91-I, and 101-I airborne. This conversation turned into this article.

First, a little about the division itself. This is truly an elite, one of the most honored units of the American army. Suffice it to say that even some units and formations of the Russian army have a similar structure.

The division began its combat career in the distant 1942 year. It was sent to Britain and from there in 1944, she landed in Normandy. On the night of 5 on 6 June. In mid-July, the division was returned to Britain. About how the division fought in this period, they say losses. More than half of the personnel!

But in September of the same year the division was again in the thick of fighting. Takes part in the operation "Garden". It was this division that captured the strategic bridges then. And again, almost half of the soldiers and officers were missing.

In December 1944 in history the division was entered, probably the most glorious page. In the Ardennes, near the Belgian city of Bostol, the division was surrounded and held under continuous bombardment and shelling of the Germans. The American paratroopers did not retreat.

Then reorganization. Transfers to the reserve and back. And - Vietnam. This is where 101-I became what it is today. Airmobile division. Part of the US Army rapid reaction force. The name "airborne" remains as a tribute to the victories of the soldiers in the 2 World War II The division landed from helicopters.

Today, the 101 Division is the only unit in the US Army that can parachute from helicopters. The division's motto is "Rendezvous With Destiny" (Meeting with Destiny). The military slang name is Screaming Eagles. Accordingly, the 101 chevron division looks like the head of a bald eagle on a black field.

The division today is a combination of rapid response units. Hence it has an appropriate structure. 8 combat regiments of airborne infantry. A company of airborne paratroopers with experience in parachuting, including long-distance jumping from a great height. 3 artillery battalions. Air Defense Battalion. Engineering battalion. In addition, there is its own air wing, consisting of transport helicopters and fire support helicopters. As well as own aviation brigades.

Particular attention is paid to the intelligence unit. Truly trained professionals. Outside the composition of combat units. With their own helicopters and reporting directly to the division commander.

Now back to the beginning of the article. More precisely, to the statement of the general, the head of the Pentagon Ashton Carter. The American "commander" words acts in a style really great. He came (it must be understood - he arrived at the place where the division is stationed at Fort Campbell), he saw (in the sense of talking to the command), he won (again, in the sense of - the division would rush to Iraq to fight).

But why is there an airborne division? Something not really believe in the American soldiers who will be in the chain to go on the attack. As the heroine of our sensational film, “Not his education,” used to say ... Americans will advance only after many days of bombardment of enemy positions. To even insects alive was left. Then go ahead to victory!

Even more ridiculous is the statement of the head of the Pentagon on the goals and objectives of the division in Iraq.

"We are looking for new opportunities (to combat IS). But we are not going to replace local forces, the administration and the police. But to search for these new opportunities, we sent some special forces ... They find those (local) forces who want to fight with DAISH" .

So, the paratroopers will not have to perform police functions either. Then why? We are not going to fight. Substitute local police and administration too. We will fight the IG ... General, or maybe it's time you take off the fourth star and become a normal general? Not a commander.

It was not for nothing that I started an article with the heroic history of 101. On the heroic battles of 1944. Already very today's statement resembles the same 1944. When the Soviet Army already broke the back of a fascist beast. It was necessary to have time for the distribution of prizes. Then we did it! And now they are talking about the leading role in the victory over fascism.

Successes of the Syrian army in the fight against Daesh, the successes of the Russian VKS are such that Syria will soon be completely liberated. And the logic of further struggle suggests that the fighting will be transferred to neighboring states. Including Iraq. That he is a stronghold of DAISH in the region. Thus, the American division is already what is there, becomes one of the winners DAISH!

We have time for the distribution of prizes!

Honestly, I'm not sure at all about the implementation of this operation by the American army. Pleasure is expensive. Yes, and requires a lot of manpower and resources. The airborne division, even in name, must be deployed promptly. So, by airplanes. And the Americans, from which they have not been taken away, are able to count money. But even if instead of a military operation, the head of the Pentagon simply propiarized possible actions by the United States, they would still benefit.

"We wanted to help. But a certain leader refused our help. And if they did, they should receive dividends from your, or rather our (American) victory."

Here is a brief summary of all written.

Ctrl Enter
Noticed oshЫbku Highlight text and press. Ctrl + Enter
We are
What is armed, how equipped and what equipment is in service with Russian paratroopers (photo report)Results of the week. “In our cooperative, the board is always agreed”
69 comments
Information
Dear reader, to leave comments on the publication, you must to register.