January 26 2016
11
Often, new projects face various difficulties, which in the end are overcome. However, some of them still cannot get rid of all the problems, resulting in changes in plans and other not very pleasant measures. So, in recent weeks, several have come from the United States News on the progress of the LCS project, as well as on adjusting the plans for this program. All these messages look far from optimistic. The project has significant technical and other problems.


During December and January with the ships of the LCS project (Littoral Combat Ship - “Littoral fighting ship”) two incidents with various breakdowns occurred. The 11 of last year’s USS Miluwaukee (LCS-5), heading 40 miles off the coast of Virginia, faced technical problems. American media reported that the ship could not fully solve the tasks after the chips were found in its oil filters. After identifying such problems, the ship was sent to the port for passing the necessary checks and repairs.

Also, the American press noted some of the features of the Milwaukee ship, which made the situation even more unpleasant. Firstly, the media reminded that the construction of this ship cost the Pentagon 362 million dollars. In addition, this is the newest ship of the series - it was commissioned on November 21. Thus, the service of the ship without repair lasted only 20 days - a kind of anti-record of the US Navy. 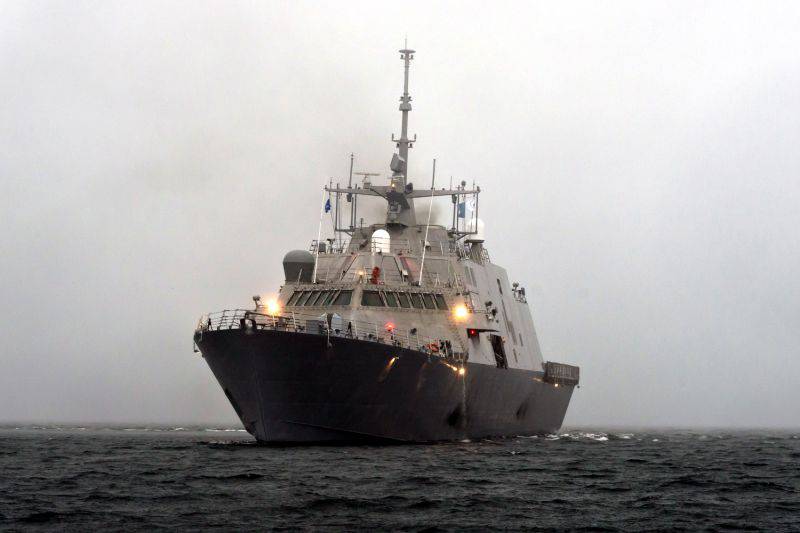 The following case of a ship crash of the LCS project occurred on January 12. The USS Fort Worth ship (LCS-3) was in the port of Singapore when the crew discovered problems with the power plant. The Pentagon reported this incident only a few days later. At the time of publication of the official report, the cause of the accident was not established, but it was claimed that the experts were engaged in analyzing the situation and trying to determine the nature of the failure.

The USS Fort Worth ship (LCS-3) was transferred to the US Navy in September 2012. Over the past three years, the ship managed to make several long exits to the sea, take part in a number of combat training activities, and also visit a number of friendly states. Reported some minor breakdowns, after the repair of which the ship returned to full service. Now, as follows from recent reports, the ship is faced with more serious problems.

While naval specialists are engaged in the repair and maintenance of combatant ships, the leadership of the US military is building new plans for updating the surface fleet. Some new plans do not look optimistic from the point of view of the Littoral Combat Ship project. According to plans approved in mid-December last year, the program for the construction of new ships will be reduced again.

16 December, it became known that the LCS project will undergo new cuts. US Secretary of Defense Ashton Carter instructed the fleet commanders to cut plans for the purchase of new ships. In accordance with the instructions of the Minister, now you should not build a 52 new ship, but only 40. In addition, the next fiscal year, the Pentagon will have to choose which of the companies participating in the project will continue to build new ships. At present, Lockheed Martin and Austal USA are responsible for the construction of LCS. By the 2019 financial year, the order fulfillment system must be rebuilt, with the result that only one contractor company will deliver the ships.

Purchase cuts will begin shortly. According to previous plans, from the 2017 to 2021 years, the US Navy was to receive 14 ships of the LCS type. Now only six ships are planned for this period: from the 17 to the 20, the fleet will consist of one ship per year, and in the 2021 is two at once.

According to reports, the program cuts have several goals. The first is the release of finance to pay for other programs that are equally important for the development of the fleet, without prejudice to the construction of ships. Thus, funds saved on LCS are planned to be used for the purchase of deck F / A-18E / F and F-35C aircraft, as well as SM-6 anti-aircraft missiles. In addition, part of the money will be used to finance the further construction of destroyers of the Arleigh Burke type and the modernization of Virginia-type submarines.

The second reason for the cuts is related to the approach to fleet modernization and the characteristics of new ships. New LCS ships with a number of features are designed to replace existing ships of several classes. They will have to replace outdated patrol ships, frigates and minesweepers. Pentagon analysts have calculated that the construction of only 40 units of LCS will not only fully replace the existing ships, but also provide a noticeable superiority over the existing grouping of heterogeneous forces. Thus, the construction of 52 or even 60 ships, as planned earlier, will lead to an unjustified increase in costs when the requirements for combat capability are exceeded, which is considered to be inexpedient.

The Department of Defense document, which sets new plans for the construction of ships, notes that in recent years, the US Navy has been spending excessive resources on increasing the number of ship personnel, including by reducing funding for other critical areas, such as strike systems, electronic warfare systems etc. In the meantime, potential adversaries continued to develop these trends. The result of this approach to fleet modernization was a reduction in the number of aircraft, percussion and other systems necessary for an effective fight against a developed enemy. The reductions in ship purchases proposed in December, in turn, should ensure the restoration of the required potential.

Soon after the appearance of the directive signed by E. Carter, the decision of the military department was commented on by representatives of the naval forces. The fleet is dissatisfied with such a proposal and is going to appeal against the decision to reduce the series of LCS ships. In addition, the relevant document notes that the budget for the 2017 fiscal year is only being discussed and not yet approved. Thus, it can be expected that in the very near future there will be new messages concerning the future construction of ships.

The LCS project still remains the cause for numerous disputes, including among the leadership of the American armed forces. The project was created according to an interesting, but ambiguous technical task, which required the development and construction of relatively simple and cheap ships capable of performing a variety of tasks. In addition, the requirements for arming ships, which ultimately resulted in a decision to change the composition weapons and add missile strike systems to the existing complex.

Another consequence of disputes about the future fate of the project was a reduction in construction plans. Initially, about ten years ago, it was planned to build 60 ships with a total value of the order of 12 billion dollars (about 200 million per ship). In the future, the cost of construction increased significantly, which led to a budget adjustment, and then to a reduction in the series to 52 ships. Finally, in December last year, the US Secretary of Defense ordered to cut plans again, now to 40 ships, which, however, does not suit the command of the Navy.

Disputes about the future of the LCS project continue. The naval forces have already managed to defend the project of building new ships, but their number still remains the subject of discussion and a real war between the Ministry of Defense and the Ministry of the Navy. For various reasons, the fleet management continues to insist on the construction of a full-fledged series of 52 ships, approved earlier, and against the recent reduction directive.

Implementation of the updated plans, according to the Ministry of Defense, should begin in the 2017 fiscal year. The military budget for this period will be approved only in a few months, which gives the naval commanders ample time to defend their point of view. Thus, in the very near future, new messages may appear on updating plans for the construction of Littoral Combat Ship. We will continue to monitor the situation and disputes in the highest circles of the American armed forces.