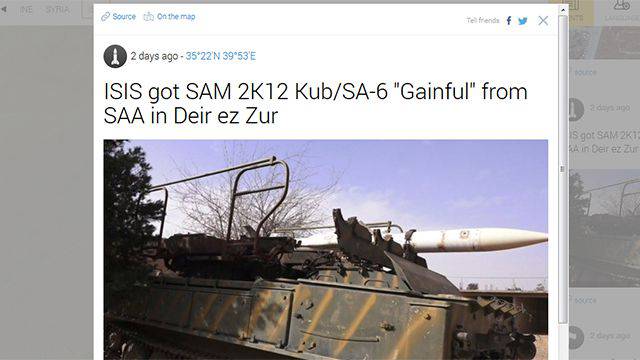 Such a complex was widely exported by the Soviet Union over 40 years ago. The Kvadrat SAM system took part in numerous armed conflicts in the Middle East. The main operators of the “Cub” air defense system (“Square”) besides the armed forces of the Soviet Union (at one time) and Syria were (are) such countries as India, Egypt, Iraq, Kuwait, Poland.

In a number of Western (as well as Ukrainian) media outlets managed to misinterpret information about the seizure by militants of the Kvadrat air defense system, writing that igilovtsy "captured the anti-aircraft missile system from the servicemen of the Russian army." This disinformation in the format of “spoiled phone” is distributed in a number of foreign segments of social networks and the media “information”.

The main question is whether the militants will be able to use the anti-aircraft missile system if it really was captured by them from the Syrian army? If we consider that there are quite a few former soldiers of the Iraqi army as part of the IG, in which the Kvadrat air defense system was in service, this probability is high.

Ctrl Enter
Noticed oshЫbku Highlight text and press. Ctrl + Enter
We are
ZRK C-200 rust in the woods near Moscow
124 comments
Information
Dear reader, to leave comments on the publication, you must to register.