The forum in Davos turned into a “talker”

January 26 2016
19
Last week, the World Economic Forum ended in Davos, Switzerland. Foreign experts noted that only the head of the Ministry of Economic Development and Trade Alexey Ulyukayev visited the forum from the top officials of the economic bloc in the Russian government, but he was interested only in a closed session on the WTO. However, first of all, investors and politicians who arrived in Davos spoke not about Russia, but about China’s problems, the new round of the financial crisis, the technological revolution, oil prices, climate change. 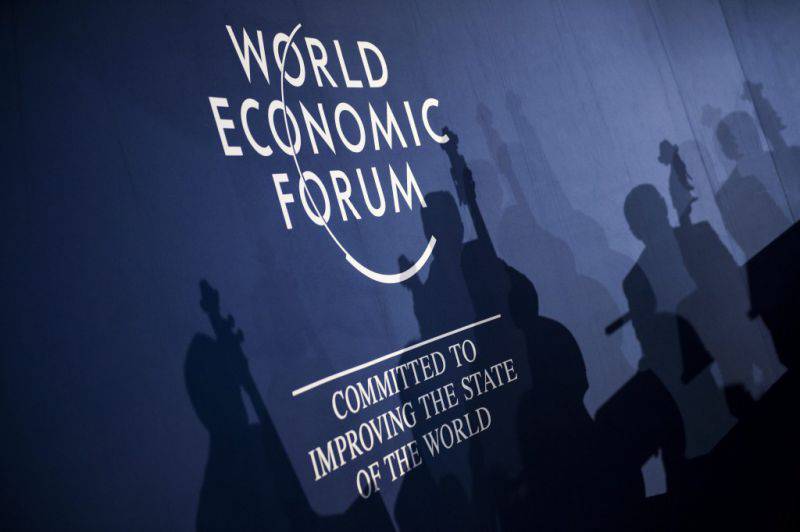 The forum was held from 20 to 23 in January and gathered over 2,5 thousands of participants from one hundred countries of the world.

One of the main themes in Davos was the Fourth Industrial Revolution. They also discussed the problems of refugees in Europe, geo-economic challenges, global security, difficulties in the Chinese economy, the likely global financial crisis, oil prices, health care, climate change issues, sanctions against Russia, etc.

Of the officials of the economic bloc, only Minister of Economic Development Alexei Ulyukayev arrived in Switzerland, but he confined himself to a closed session on the WTO, reminds RIA News".

Russia this time received only one panel discussion on the forum, notes RBC. The speakers were the head of the delegation, Deputy Prime Minister Y. Trutnev, Head of VEB V. Dmitriev, Chairman of the Munich Security Conference V. Ishinger, ex-Minister of Finance A. Kudrin, Chief Editor of RBC E. Osetinskaya.

According to Trutnev, the crisis brings Russia not only threats, but also opportunities. Here they are: 1) an incentive for reform; 2) investment-friendly cheap ruble; 3) "people's solidarity." Kudrin immediately noticed that the government can respond to the redundancy of spending in three ways: 1) by reducing them; 2) increasing the national debt; 3) increasing the tax burden. “We are looking for a way out,” said Trutnev.

RBC also cites the opinion of V. Ischinger, who spoke not about economics, but about politics. The relations of the West and Russia have been fruitless for the past two years as a result of the “disastrous policy of Russia towards its western neighbors.” He said that precisely because of the contradictions between Moscow, Washington and the European capitals it was not possible to stop the bloody war in Syria.

Russia remained on the periphery of the forum, states RBC. The fact that the West and Russia have no joint economic agenda told the source on the eve of the forum a source in the Russian government.

According to the chairman of the board of directors of IC Eurofinance, Yakov Mirkin, the loss of interest in Russia is connected with the loss of sense of perspectives in the post-Soviet markets (they are high-risk). The CIS states "strongly depend on adverse external factors."

As transmits RIA News", attended the WEF and the topic of sanctions against Russia. The fact is that US Secretary of State John Kerry made the abolition of restrictive measures in the coming months.

“Earlier this week, here in Davos, Vice President Biden and I met with the Ukrainian President Poroshenko to help ensure the full implementation of the Minsk agreements. And I am sure that thanks to the efforts and legitimate attempts to solve the problem on both sides in the coming months, it is possible to fulfill the Minsk agreements and come to the moment when the sanctions may be lifted due to full implementation, ”the agency quotes him.

Regarding the price of oil, questions were posed to the Iranian forum participants. Iranian Foreign Minister Mohammad Javad Zarif bluntly told RIA correspondent “News“That oil prices should adapt after Tehran’s return to the market, and such a return could trigger a further drop in the cost of a barrel.

Besides him, Mohammad Nahavandyan, head of the Iranian presidential administration, spoke out. He assured the audience that Iran could contribute to the energy security of the European Union: “Iran has the world's largest oil and gas resources. These resources can be useful for ensuring energy security, especially in Europe. In particular, opportunities are opening up for the development of gas projects, LNG projects. ”

You can not go past the theme of the turn of Russia to the east.

As the correspondents reported TASS, on the forum, Russia has confirmed its turn to the east. Investors were told about the life of Russia under sanctions in the context of record low oil prices and projects were presented in the Far East.

In the past two years, Russia has been actively exploring new markets for the Asia-Pacific region and the Middle East, concluding a number of multi-billion deals.

Deputy Prime Minister Yury Trutnev said that a turn to the east should be perceived as a turn of Russia to its Far East, which occupies 36% of the territory. “I would rely on the position of a well-known Chinese leader, who said that it doesn’t matter what color the cat is, so long as it catches mice. We are satisfied with any investments, ”said Trutnev.

True, Vladimir Dmitriev, the head of VEB, which already finances joint Russian-Chinese projects in the Far East, is skeptical of the excessive enthusiasm for the development of Russian relations with China: “We should not overestimate the desire of our Chinese partners to increase cooperation with Russia. They are quite pragmatic. ” He suggested that for Russia the corresponding cooperation would not be “infinite and free.”

Two largest Russian banks, Sberbank and VTB, which are under sanctions, took part in the forum and organized thematic events about Russia. The leaders of banks convinced investors that Russia would be able to overcome the crisis.

“Crisis is when you need a glass of vodka instead of a cup of coffee at 7 in the morning. I am still satisfied with my coffee in the morning, so I did not reach such a stage, ”TASS quotes the head of VTB Andrei Kostin.

Special mention deserves the theme of Ukraine, which actively pierced their interests at the WEF.

“It was noteworthy that, compared with last year, the interest of the forum participants to Ukraine has clearly cooled,” writes on the portal "Fund of Strategic Culture" Professor, Doctor of Economics, Chairman of the Russian Economic Society Valentin Katasonov. - Moreover, the Ukrainian delegates (the number of which the organizers of the forum limited 20 to persons) hinted that the discussion on the topic of Donbass and war is not welcome. Europe from Ukraine over the past year pretty tired. To negotiate the money, the Ukrainian president took in his delegation Minister of Finance Natalya Yaresko, Chairman of the National Bank of Ukraine Valery Gontareva, Minister of Economic Development Aivaras Abromavicius. Poroshenko acted in two directions. The first is IMF executive director Christina Lagard. The second is US government leaders. In the first direction, the Ukrainian president managed to get oral moral support from the Foundation’s leader and promise to continue funding the square. True, the promise was conditional: the decision on the new tranche will be made only after the completion of the next review of the IMF in Ukraine. It is not completed yet. A number of conditions set for Kiev have not yet been fulfilled. Until now, by the way, Kiev has not demonstrated that he had “good faith negotiations” with Moscow over the 3 billion debt, which was to be repaid on December 20 on 2015, but has not been repaid yet.

Natalia Yaresko, the expert continues, was instructed to “spud in Davos” the main officials from Brussels. True, those from monetary promises "skillfully evaded." Kiev's requests for financial assistance looked “particularly funny” against the background of open data, which all participants in the WEF could read.

In Davos, the competitiveness ratings of 140 member countries of the World Economic Forum are calculated on a regular basis, they are published in the Global Competitiveness Report, reminds Katasonov. The latest document contained the following Ukrainian places in the 140 countries ranking:

- development of the securities market as a source of financing: 118 place;

- availability of prices on the financial services market: 123 place;

- The effectiveness of the state apparatus: 130 place;

Summing up the work of the past forum, V. Katasonov draws two conclusions: “Firstly, the forum is becoming more and more noticeable in a talker, that is, a decline in the international authority of Davos. Secondly, an attempt by the United States to put the work of the forum, which has traditionally been a “Eurocentrist” platform, under its control is visible. ”

So, one of the important statements in the framework of the forum should be considered the statement of US Secretary of State John Kerry, who made the lifting of sanctions against Russia in the coming months.

Iranian Foreign Minister Mohammad Javad Zarif spoke frankly about the future of oil prices: Tehran’s return to the world oil market could trigger a further drop in the cost of a barrel.

The leaders of Sberbank and VTB tried to convince potential investors that Russia would be able to overcome the financial crisis.

Vladimir Dmitriev, the head of VEB, was skeptical of being too enthusiastic about the development of Russian relations with China, and Russian Deputy Prime Minister Yury Trutnev said at the forum that a turn to the east should be perceived as a turn of Russia to its Far East.

The question of the economic situation in Ukraine was raised on the forum. According to the Global Competitiveness Report, Ukraine is confidently striving for the last places in this rating in terms of the development of the securities market, the effectiveness of regulation of the stock market, the efficiency of the state apparatus, the tax burden on business and other parameters. In terms of bank reliability, the country ranked 140-place - below nowhere. Therefore, Poroshenko and Yaresko looked funny to the European participants when they asked for money for reforms.

Observed and commented on Oleg Chuvakin
- especially for topwar.ru
Ctrl Enter
Noticed a mistake Highlight text and press. Ctrl + Enter
We are
Chinese Davos: Beijing makes global leadership at the World Economic ForumWTO is marking time. Russia will push?
19 comments
Information
Dear reader, to leave comments on the publication, you must to register.