January 26 2016
25
If US Vice President Joe Biden was confirmed in his thoughts about resolving the conflict in Syria by military means, then US Secretary of State John Kerry announced that negotiations, initiative, coordination, and similar positive things that have nothing to do with the war continue. Moreover, Kerry allowed the lifting of sanctions against Russia "in the coming months." How did it happen that two major American politicians started talking about opposite things? 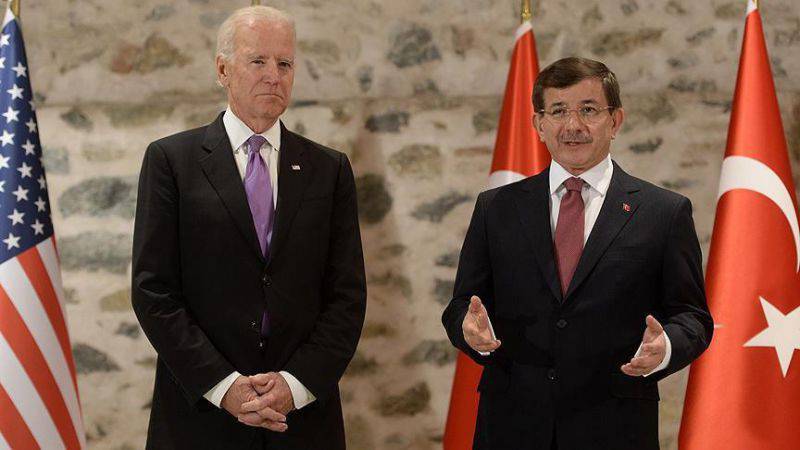 Washington will continue to help Turkey “fight against the Islamic State” and “prevent the creation of a separate state near the southern borders of Turkey,” said US Vice President Joe Biden at a meeting with Turkish Prime Minister Ahmet Davutoglu. Moreover, the USA is ready to resolve the Syrian crisis by military means.

“Yes, we know that it would be better if we succeed in reaching a political solution, but we are ready, if it is impossible, to find a military solution to this operation and destroy IG,” Biden is quoted as saying. "Vesti".

This statement by the US Vice President in Moscow was considered "destructive." “It’s strange to hear these statements against the background of the fact that all countries are searching for a political settlement, and such threats can be simply destructive,” said Interfax unnamed Russian diplomatic source.

A little later, notes Kommersant, The Wall Street Journal correspondent Carol Lee, who was on duty at the vice president’s press pool, citing a White House spokesman who participated in a trip to Turkey, explained Biden’s statement. According to her, the vice-president wanted to emphasize the intentions of the United States to seek "to complete with the help of political means the civil war in Syria in the broad sense of the word" and "simultaneously use a military solution against the" IS ".

"BBC" gives other "explanations" of the White House about the statements of Biden.

The White House explained, the television and radio company points out that the vice-president’s words about a political decision related to peace negotiations between the Syrian authorities and the rebels; The statement about the military decision concerned only the "IG".

"BBC" recalls that this week should be held negotiations with the participation of representatives of the Syrian authorities and the opposition under the auspices of the UN.

While the White House was “deciphering” Joe Biden’s difficult press statements, the US Secretary of State was talking about peace and negotiations.

As transmitted RIA News"The day of the beginning of the inter-Syrian negotiations in Geneva has not yet been determined, but they can take place within a few days if there is an initiative. About this in Riyadh, said US Foreign Secretary John Kerry.

"We are confident that with a good initiative, these negotiations can take place within a few days," Kerry told reporters after meeting with representatives of the states of the Gulf Cooperation Council.

Thus, a kind of contradiction arose between the “belligerent” statements of Biden and the speeches of John Kerry, who was waiting for a “good initiative” and the beginning of peaceful inter-Syrian talks in Geneva.

Moreover, earlier the state secretary even spoke about the possible lifting of sanctions against Russia.

January 22 on the agency website Reuters appeared news under the heading " In general terms, this means that the “bona fide” implementation of the Minsk agreements by Russia and Ukraine may lead to the lifting of sanctions against Russia.

The text states that with the conscientious efforts of "both sides" and the implementation of the Minsk agreements in the coming months, sanctions against Russia could be lifted.

This Kerry said, speaking at the World Economic Forum in Davos. According to him, he (Kerry) and US Vice President Joe Biden met at the Swiss resort with Petro Poroshenko and spoke on the implementation of clauses of agreements.

In addition to Kerry, let us add to this, NATO is preparing to improve relations with Russia. And, quite surprisingly, the American senator Marco Rubio, who earlier called Putin "a gangster," now also set out to "look for ways to improve relations" with Moscow.

Chairman of the NATO Military Committee Czech General Peter Pavel (Czech Army Gen. Petr Pavel) "The Wall Street Journal" stated that Moscow rejects the alliance’s attempts to establish a dialogue. He told this to the correspondent at the end of the meeting of the NATO generals in Brussels.

Peter Pavel said that the majority of alliance states are looking for a “middle ground” in relations with Russia, which also provides for interaction, despite the strengthening of the presence of NATO in the Baltic States and in Poland.

Since Russia “respects” primarily “strength and power,” the alliance should “develop its own approach,” based on “a combination of deterrence and interaction,” the general explained.

If only recently, Rubio called for isolating Russia, proposed tightening sanctions, and also called Vladimir Putin a "gangster", now the senator suddenly showed a peacefulness and recognized the need for political detente.

“We have no choice but to meet each other in order to find ways to improve relations,” said Rubio on a radio station in New Hampshire. The senator explained the lack of "choice" by the fact that the United States and the Russian Federation are in the arsenals of "90% of nuclear warheads on Earth." That is why it is necessary to "negotiate".

We assume that the old Joe made a reservation about the "military solution" in Syria. As is often the case with representatives of the White House, it was “not so” understood by journalists. Or understood “so”, but to perfection of style and intonation Biden is very far away. And the people specially hired by the White House explain to the public over and over again that she (the public) heard one thing, and the other was meant.

An isolated US military operation in Syria without coordination with the Russian operation would inevitably lead to incidents. And talk of this kind of "decision" is particularly inappropriate now, when American politicians and NATO generals rushed to look for ways to "improve relations" and "interaction" with Moscow.

Observed and commented on Oleg Chuvakin
- especially for topwar.ru
Ctrl Enter
Noticed oshЫbku Highlight text and press. Ctrl + Enter
We are
"Pathological liar" from the State DepartmentSyria: "Friends" met again
25 comments
Information
Dear reader, to leave comments on the publication, you must to register.