Project "ZZ". Achtung! Russians on the streets of Europe!

January 25 2016
138
Western analysts believe that the Russian economy is expressed only in the export of crude oil. Now oil has fallen in price, and this means that Russians have no economy at all. What will the Russian authorities do? Oh, they don't care about economics, they are busy with politics. Experts admit that the Kremlin is implementing a “program” to physically eliminate the political opponents of the regime, not only in the UK, but throughout Europe, and in the US too. Therefore, London politely warned its allies: beware, insidious Muscovites may appear on your streets. Other analysts, hailing from the Czech Republic, are inclined to believe that Russians will not kill in Europe, but buy politicians. All of this is very frightening for the West, especially against the background of statements by strategic thinkers from the American brain trust Stratfor: they are sure that Putin's Russia is stronger than it seems.

First: you can never get involved in Asian territorial disputes. Second, it is foolish to assume that oil exports will replace the real economy.

Today we are witnessing how the ruble is rapidly rolling down, a reporter reminds. The Russian currency is again in a "free fall". True, the ruble strengthened a bit last Friday, because oil rose in price that day.

There is nothing special about weakening the ruble: Russia, one might say, has no economy other than the export-oriented oil business. This kind of activity in the current situation allows us to make a simple conclusion: Russia “has no more economy at all.” In addition, the slowdown in China means that the demand for "black gold" will decline.

Not only bad for the Russian economy, but also for its budget. Oil revenues account for half of government revenues, the author recalls. Russian top officials said the country may have to cut oil production to try to support prices. But in this way Russia will give up the market share of Saudi Arabia - and lose in the new cold war.

Due to low oil prices over the past two years, the ruble has fallen by almost 60 percent. Russian companies are in the grip of debt denominated in dollars. Smacks of national bankruptcy.

On the other hand, a cheaper national currency will make the export part of the Russian economy (non-oil) more competitive.

And what is the conclusion?

The ruble will fall as long as oil becomes cheaper. Russia is constantly attacking the same rake. Its rulers have already passed these lessons: in 1986 and in 1998. And now, in 2016, they pass them again. The Russian economy is only as strong as the oil price is stable. That is, there is no need to talk about any kind of power. Reducing the income of citizens - "not a good sign" for Putin, believes Matt O'Brien.

What will the Russian authorities do? Oh, they don't care about economics, they are busy with politics. Experts admit that the Kremlin is implementing a “program” for the physical elimination of the political opponents of the regime, not only in Great Britain, but throughout Europe. Yes, that in Europe-the Russian will unfold in the United States. Therefore, London politely warned his allies beware, insidious Muscovites may appear on your street.

Nico heins in "The Daily Beast" (USA) makes intriguing guesses. "Britain Warns Allies: Crown Beyond Your Streets," he writes. What the translation means: "Britain warns allies: Russians can start killing on your streets as well."

Niko Hines does not doubt that the “program of Vladimir Putin” for the physical elimination of the political opponents of the regime, “inherited from the KGB, is now becoming more and more obvious. Britain has already officially warned the United States and other allies around the world about the likelihood of political killings on their territories. The Kremlin will sponsor the killings.

London has reason to think about the invasion of Russian killers to the West: after all, “many strange and KGB-related killings on the streets of London”, including A. Litvinenko’s poisoning, were recorded. For several decades, there have been such "weirdness". 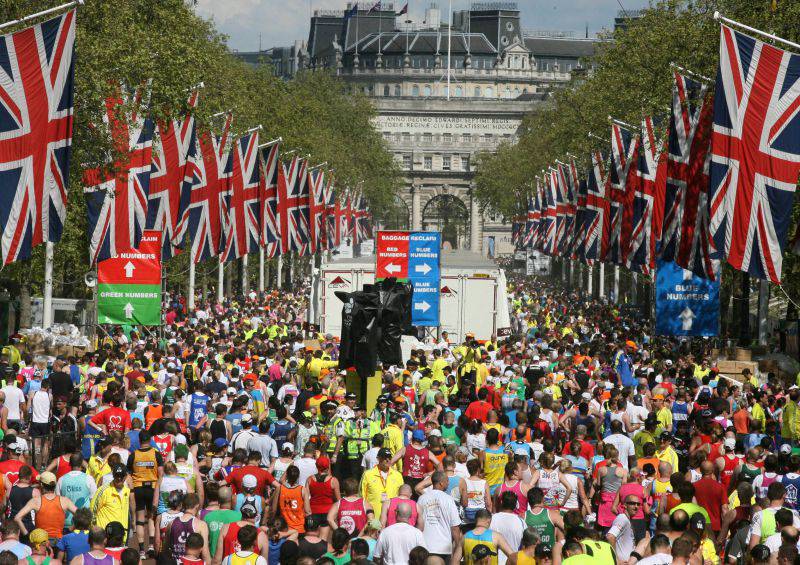 On the streets of London, Russian KGB agents easily get lost in the crowd

The author is confident that the Russian special services are inspired by the behavior characteristic of the British. For example, a radioactive substance to kill Litvinenko was added to the teapot.

Heins points out that the results of the investigation into the murder of Litvinenko showed that it was a political murder, and he was “ordered” by the FSB. There is even the opinion of the judge who said that this operation, "perhaps," Putin himself approved.

Tereza May, the Minister of Internal Affairs of the United Kingdom, also points to the “guilt of Moscow” in A. Litvinenko’s death. T. May sent letters to colleagues in Europe, NATO and the Five Eyes Alliance (Canada, UK, Australia, New Zealand, USA), where she warned about the need to treat the attached report with all attention "and take measures to prevent such killings on the streets their cities. "

In the editorial Natoaktual.cz (Czech Republic, source of translation - "InoSMI") nothing is said about the planned Russian killings in Europe and the United States, but it tells about the introduction of the Kremlin’s people into political parties in several European countries.

There are suspicions that the Kremlin succeeds in introducing people into political parties in several European countries in order to influence what is happening in party structures and public opinion. The lists include France, Holland, Hungary, Austria and the Czech Republic. Czech agents Russian agents consider the gateway to Schengen.

US intelligence agencies have already received the task to begin a large-scale investigation. Congress instructed the head of the National Intelligence Agency, James Klapper, to study the likelihood that Russia in the past decade has secretly financed some political parties in European states. Washington is afraid that Moscow has conceived to destroy European unity in the matter of creating a NATO missile defense system and continuing the policy of sanctions.

In this investigation, too, was not without British politicians. The order to initiate an investigation was issued after members of the British government told the media about Russia's "stubborn" attempts to influence policy in Europe. “Throughout the EU, we see alarming evidence of the Russian desire to break the structure of European unity on a number of policy issues in principle,” the British newspaper Daily Telegraph quotes a government source.

Therefore, the US intelligence services are primarily subjected to checks by political parties and non-governmental organizations seeking to “undermine political unity” and campaigning against the construction of NATO anti-missile shield facilities.

The article mentions the omnipresent KGB. “The former KGB was also famous for influencing public opinion in Western countries. We can assume that this is still happening today, but it will probably be impossible to prove it, ”security adviser and former head of military intelligence of the Czech Republic Andor Shandor told the publication.

Among those parties where the people of the Kremlin are being introduced, the publication calls the radical right-wing party For the Better Hungary in Hungary, the Golden Dawn in Greece, the League of the North in Italy and the National Front Marine Le Pen in France. “Suspicions cause” and the relations of Russian diplomats with politicians in Austria. An example of the Russian operation to gain influence is also considered the campaign of the leader of the British Labor Party Jeremy Corbin: this man does not hide the desire to save Britain from nuclear weapons, nationalize railroads and energy companies, and compares US policy with the actions of the Islamic State. Corbin, for good reason, gets a lot of airtime on Russia Today TV channel.

The Kremlin’s wide activities are even more frightening for the West when it learns that today's Russia is much more stable than it seems at first glance.

According to the expert, the world is now arguing about the "prospect of destabilization" of Russia. Arguments in favor of destabilization are known: a sharp drop in oil prices, economic sanctions from the West, and the likelihood of public unrest. The latter will become a threat to the government of V. Putin. Unrest in Russia in one form or another has already taken place: protests by Russian truckers, anti-Putin rhetoric of opposition bloggers, etc. Some observers believe that these are signs of increased instability in Russia.

Such assumptions, the author believes, have a common shortcoming: their authors view the Kremlin and events in Russia exclusively from the Western positions. These analysts forget that the power of Putin and his people's authority remained unchanged, despite all the circumstances that could bring down the political career of any Western leaders.

A serious destabilization in Russia is unlikely, the expert concludes. People who argue about "destabilization" simply need to get rid of "a purely Western look" on things.

Next, Stephen L. Hall highlighted a number of mistakes that Western political observers make when they predict serious destabilization in the Russian Federation.

The first mistake of critics: Putin seems to care about what the Russian people think. According to experts, the power of Putin does not come from the people, as is customary in the democracies of the West. Putin is more likely to rely on "coercive methods." This method of exercising power involves the use of coercive measures against the population when necessary. And not only Putin understands this; people understand that too. Such mutual understanding “frees Putin” from anxiety about popular unrest.

The second mistake: Putin is allegedly worried about the ways in which Russians express discontent (demonstrations, protests, etc.). In reality, the Russian security services, collecting information about their organizers, are following the protests in Russia. Putin sees meaning in allowing some such protests: this allows him to create the appearance of democracy.

The third mistake: if the economic conditions in Russia worsen, the discontent of the Russians will be a threat to the current status quo. But in Russia everything is not the same as in the West: Russian people even “are proud of the fact that they have to suffer”. The government explains the reasons for economic hardship with the influence of hostile external forces (the United States and the European Union), and difficult life becomes "a national sport" and even a cause for national pride. Many Russians consider Putin to be the first strong leader of the post-Soviet era.

Despite the decline in oil prices and the dependence of the Russian budget on raw materials revenues, the Russian people are not only not going to overthrow Putin, but, on the contrary, consider him to be the strongest leader Russia has ever had since the collapse of the USSR. Difficult life with sanctions and inflation has become a "national sport". Moreover, even notorious skeptics recognize that the depreciating national currency will make the export part of the Russian economy (non-oil) more competitive.

The fact that in fact the West does not consider Russia economically and politically weakened is confirmed by the fears of British politicians. London officially warned its allies, including the United States, that "Russians could start killing" on the streets of their cities.

The Czech Republic (for a couple with the same Britain) warns about something else - about introducing the people of the Kremlin into political parties in several European countries. Russians swung at the holy: they intend to "break the structure of European unity."

Such fears suggest that Russia is considered. Obviously, the “structure of European unity” seems to the politicians of the West to be much weaker than the solidarity of the Russian people.