The first tank battle in history and its consequences

January 25 2016
17
Today, it’s no secret to anyone that weapon tank - this is his gun. However, at the beginning of the last century this truth was not yet the truth. Initially, the tanks were designed to support infantry and suppress enemy fire weapons, the designers did not even think that the tank could become an effective anti-tank weapon. Therefore, the British initially armed some of their tanks exclusively with machine guns. But already the first in stories The tank battle that took place on 24 on April 1918 of the year clearly showed what kind of weapon should be the main weapon for the tank.


World War I was the first in which tanks entered the battlefields. The first tanks in the fighting used the British. This happened on September 15 on 1916 during the Battle of the Somme. The first British Mark I tanks were far from perfect, but they were definitely familiar to many thanks to their unusual appearance. These tanks were an armored "box" of a diamond shape with a steel track circled on its body. These machines with a weight of about 28 tons had a very modest reservation - 10-12 mm front of the hull and up to 5-6 mm of the side. Such armor could only protect from rifle bullets (not armor-piercing), light shell fragments and shrapnel. In this case, the tanks did not have a turret, the weapons were located in sponsons located along the sides of the hull.

Initially, the British created tanks of two types: "female" (machine-gun) and "male" (gun). The designers of the English tank believed that the "male" would be used mainly against the machine-gun nests of the enemy, and the "female" against his manpower. Thus, immediately they introduced some division, according to the combat mission, between the two tanks. These tanks along the good road barely accelerated to 6 km / h, and off-road, where the main fighting was conducted, they barely did 1-3 km / h, that is, they were inferior in speed to a pedestrian. The problem of all the first tanks was also a very bad review. The crew could observe the battlefield only through unprotected slots, through which splashes of molten lead could fly during the shelling. Not surprisingly, the tankers of those years were very common eye injuries. 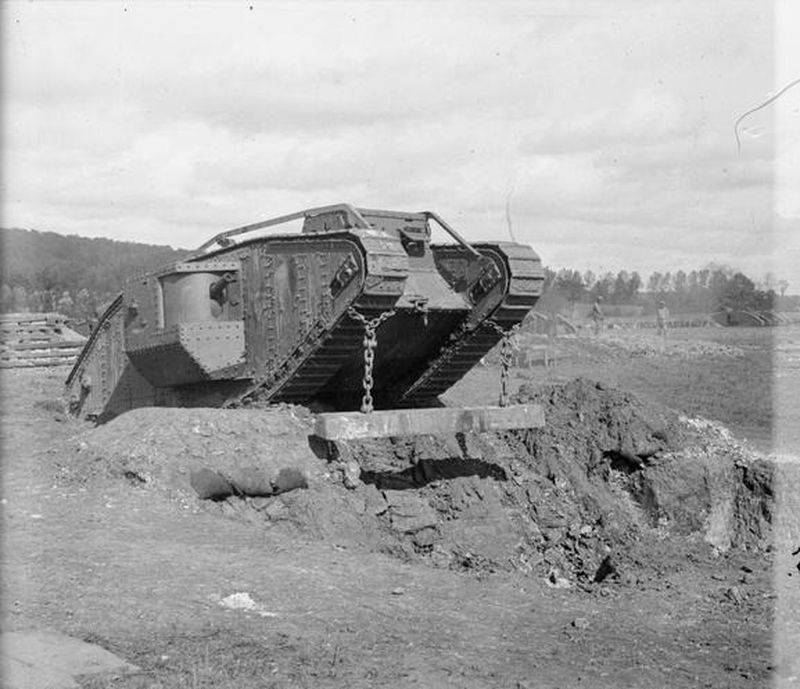 The second tanks used by the French. This happened 16 April 1917. The debut of the French tanks came out unsuccessful. At the same time, the French launched two types of tanks at the same time: the Schneider and Saint-Chamonix. A distinctive feature of these machines was that the French designers initially equipped both machines with cannon armament. The Germans did the same thing, who later all brought their tank onto the battlefield - A7V. The first battle of German tanks took place on 21 in March 1918, near the town of Saint-Quentin, located about 50 kilometers from the place where English tanks were first thrown into battle.

Since German tanks, which, by the way, only 20 units were assembled, appeared on the battlefields of the First World War only in its last year, clashes between British, French and German tanks simply did not occur. Even the fact that such a battle did occur, given the insignificance of the German tank fleet (the Germans were forced to use even the captured British Mark I), is in itself unique.

The first tank battle, which turned out to be a meeting, took place on 24 on April 1918, near the town of Villers-Bretonne. At the same time, the English tank crews who went into battle did not suspect that the Germans had engaged their own tank units in this direction. The situation at the front at that time was as follows: by April 1918, the Germans were only 7 miles from Amiens - a very important railway junction, which was also the junction of the British and French armies. As soon as the Germans took Viller-Bretonne and the heights between them and Kashi, both positions would have appeared in their hands for precise artillery shelling of Amiens with the possibility of its subsequent capture. The capture of this city could have the hardest consequences for the Allies. 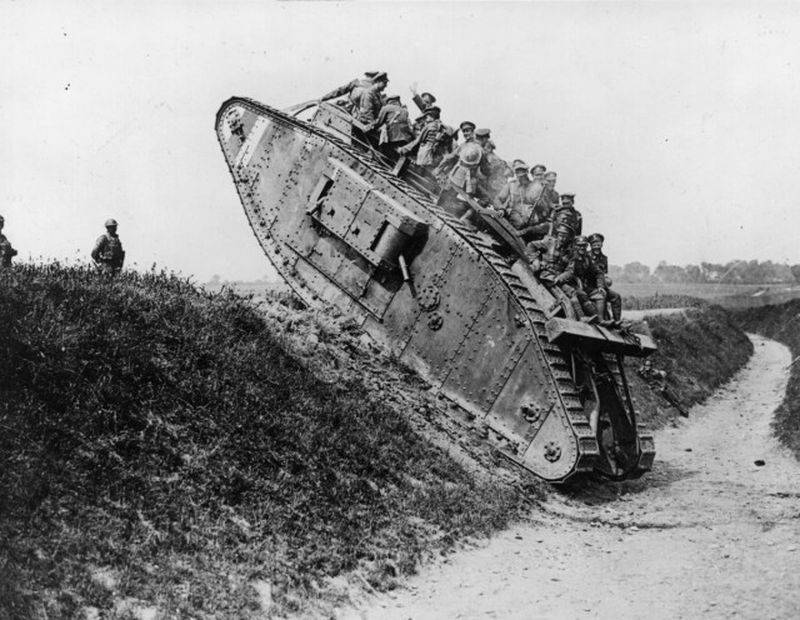 British tank Mk IV "female" with infantry on the armor

To prevent such a development, the French entered shock units here, including units of the Foreign Legion, which partially occupied positions at the Bogey de Blangy forest in 4 miles west of Viller-Bretonne along with English tanks of company A 1 th tank battalion. The tactics of combat use of these tanks was called "Wild Rabbits." British tanks were used in counterattacks, waiting in ambushes and only at the most important moment, jumping onto the battlefield as "wild rabbits from their holes," said General Hugh Elles. Tanks were used to strike the flanks of the advancing German units.

The company A, which had suffered serious losses, was armed with hastily modified Mk IV heavy tanks, which differed from the Mk I mainly in the armoring and placement of fuel tanks outside the hull. Branch №1, commanded by Captain J. Brown, consisted of three tanks - two "females", who were armed only with machine guns and one "male", commanded by 2-th Lt. Frank Mitchell. In addition to the presence of two short-barreled 6-pound guns and the absence of tail wheels, this tank differed little from the Mk I. Also in that battle, the 7 of the British medium tanks Mk A "Whippet" (with the English Borzoi) took part in the battalion "S "Commanded by Captain T.R. Price. These tanks weighed 14 tons, were armed with only four machine guns and had rather thin armor. However, their speed reached more than 8 miles per hour, and the patency was considered good. The crew of each such tank was a 3 man, while in the Mk IV there were 8.

All these British machines were opposed by German heavy tanks A7V Sturmpanzerwagen. With combat loading, their weight reached 33 tons, and the crew consisted of a 18 man (tank commander, driver, two mechanics, gunner, loader, and also 6 machine-gun commands (2 people in each). The tanks were better armored - better to 15-30 mm. In service of these combat vehicles were 57-mm cannon and 6 machine guns, which were located around the perimeter of the tank. The maximum speed of the German tank reached 10-12 km / h on the highway, the power reserve was 35 km. In fact, it was a well-defended mobile artillery platform that nd was designed to support infantry units. At the same time the first German tank was badly balanced, has poor permeability and lack of engine power. 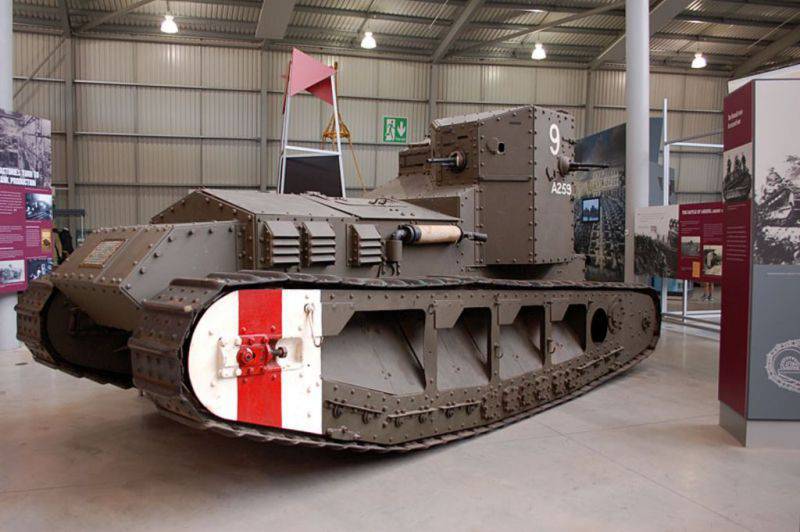 In 9: 30 am 24 April 1918, a convoy of three British Mk.IV tanks (one cannon and two machine guns) advanced in the direction of the Kashi-Suitch trench, the defense of which they were supposed to strengthen. Only for 500 meters to the immediate battlefield, the British learned that there were three German tanks A7V in this area. In fact, the German tanks had to be 4, however, due to thick fog they got lost and one tank (Elfriede) moved too far to the north, after which it fell into a ditch and turned over. Although the crew of this combat vehicle continued the battle, fighting along with the German infantry, the tank itself did not take any part in the battle.

As a result of an artillery duel between the tanks, two machine-gun Mk.IV quickly left the battlefield. The German tankers achieved several direct hits on them, causing damage to them and actually forcing them to withdraw from the battlefield. After this, the tank duel was reduced to a confrontation between the cannon Mk.IV Mitchell and one A7V, commanded by Lieutenant Wilhelm Biltz. At the same time superiority in position was on the side of the British. Due to the peculiarities of the landscape, the Germans could not use their other two tanks A7V. In this case, the crew of the German tank fired from the spot, firing not only from a cannon, but also from machine guns - armor-piercing bullets. Unlike the Germans, the British tank constantly maneuvered and, having made several shots on the move, switched to firing from short stops. As a result of three hits of the British in the crew of the Biltts gunner was killed, two more crew members were fatally wounded, three lungs. The tank was damaged and was forced to retreat, leaving the battlefield, moving two kilometers, it just died out. British counterparts also could not continue to fight for a long time, somewhere to 12: 45 Mitchell's tank broke the caterpillar with a mine, after which the British also had to leave the tank, hiding in a trench behind the combat vehicle.

During the battle, a British reconnaissance aircraft appeared in the sky, which immediately requested assistance from Captain Price, part of which was located in 5 kilometers from Kashi-Suitch. As a result, the Mk.A "Whippet" 7 medium machine-guns moved to the battlefield to defeat the Germans' infantry in the area. However, their crews did not know anything about the German tanks. For whatever reason, the pilot did not tell them about them, is unknown. Around 11, the morning hours of 7 Mk.A tanks appeared from outside the northern outskirts of Kashi, skipping through a line of wire barriers at maximum speed and reaching the line of defense. 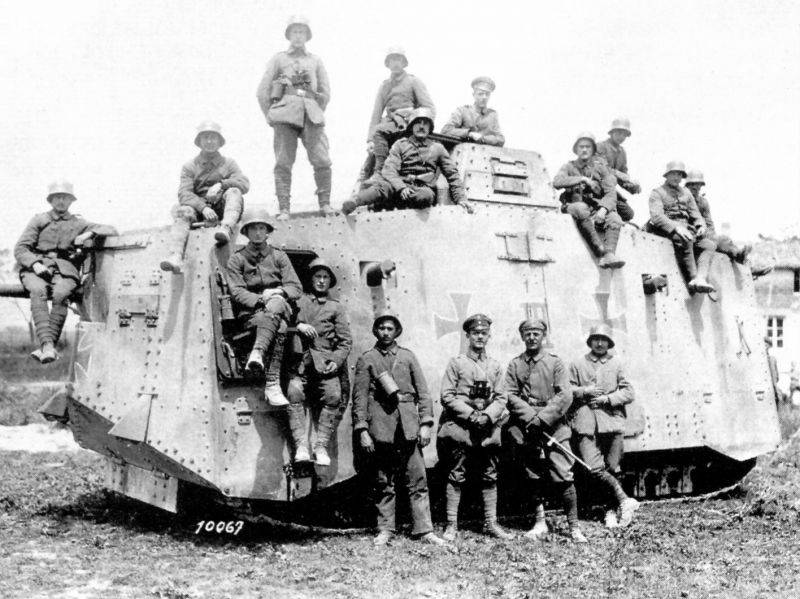 In the first minutes of the battle, they managed to bring confusion into the ranks of the advancing German infantry and cut its attacking orders, moving forward and firing at the enemy with machine guns. Then, unexpectedly, one of the attacking tanks stopped, and Mitchell saw smoke coming out of it, then another tank caught fire. The remaining five began to move back to Kashi, however, about 100 meters from the village, one tank stopped, a tankman jumped out of it, and ran to another Mk.A, which took it with him. The fourth tank went out of order not far from the garden near the village, that is, only 3 English tanks could return from the battle without damage.

It is worth noting that, due to poor visibility from tanks and fog over the battlefield, the crews of Mk.A "Whippet" did not even realize that they were under fire from German tanks. They considered their losses as the result of the actions of the German field artillery from the 4 Guards Division, which was located in the area. German gunners really fired at them, but at least one tank from the Biltz group also fired at them. It was a tank number 525, commanded by Friedrich Bitter. He fired at the British from a distance of just 300 meters, so he was more likely to hit some of the 4's tanks lost by the British.

The first tank battle in history clearly showed the designers and the military advantage of the cannon tank and all the helplessness of machine guns in front of them. Each of the German A7V tanks that participated in this battle was armed with an 57-mm gun. Despite the fact that the British were formally considered the victors of the battle, after which the battlefield remained as a result, the German tank crews managed only three tanks to effectively resist the 9 with machine guns and one British artillery tank. The obvious advantage of cannon tanks over machine guns predetermined the appearance of future combat vehicles for many years to come.

Ctrl Enter
Noticed oshЫbku Highlight text and press. Ctrl + Enter
We are
The development of the military-industrial complex of the Russian Empire in the years of WWINon-classified materials - the truth is somewhere nearby (Part of 1)
17 comments
Information
Dear reader, to leave comments on the publication, you must to register.