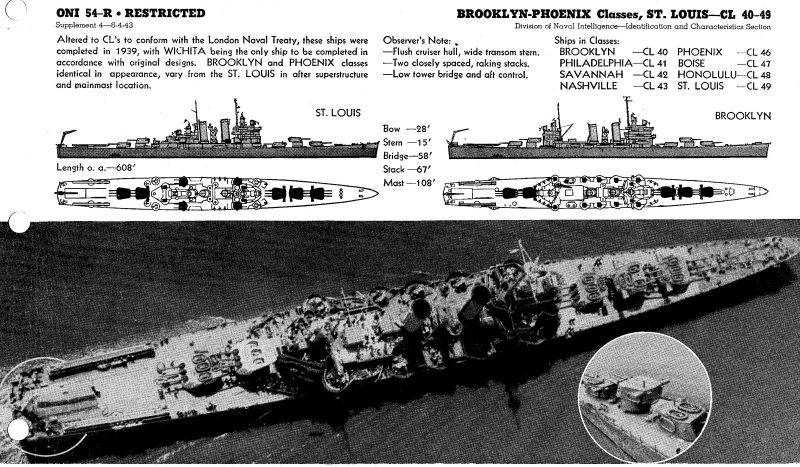 The beginning of the romantic comedy was overshadowed by the fresh breath of the “frantic fifties”. Depressive landscape, blown by the cold Antarctic wind. Flooring from low thunderstorm clouds. Water ramparts, crashing into the jaw of the ship, fountains of spray and flying shreds of sea foam.

Argentine ships cut down the ocean with the bow with the intention of circling the Falklands and taking the British into ticks. From the north, an aircraft carrier group headed by "Venticco de Mayo" was advancing. From the south, a strike mix from General Belgrano and two destroyers. And it is difficult to say, the meeting with which of the detachments was a great misfortune.

“Belgrano” was frankly old, but now it has become more dangerous with every minute. In their youth, such cruisers fired 100 shots per minute with the main caliber. A meeting with the frigates of Her Majesty promised to be short: the cruiser would kill them all, like cardboard boxes.

Fifty years before our era

The light cruiser “Brooklyn” had a length of 185 meters, a crew of 1000 people and a total displacement of more than 12 thousand tons. The “lightness” of this boar was not in its size, but in the size of the main caliber. Six inches (152 mm), quite solid for a cruiser. 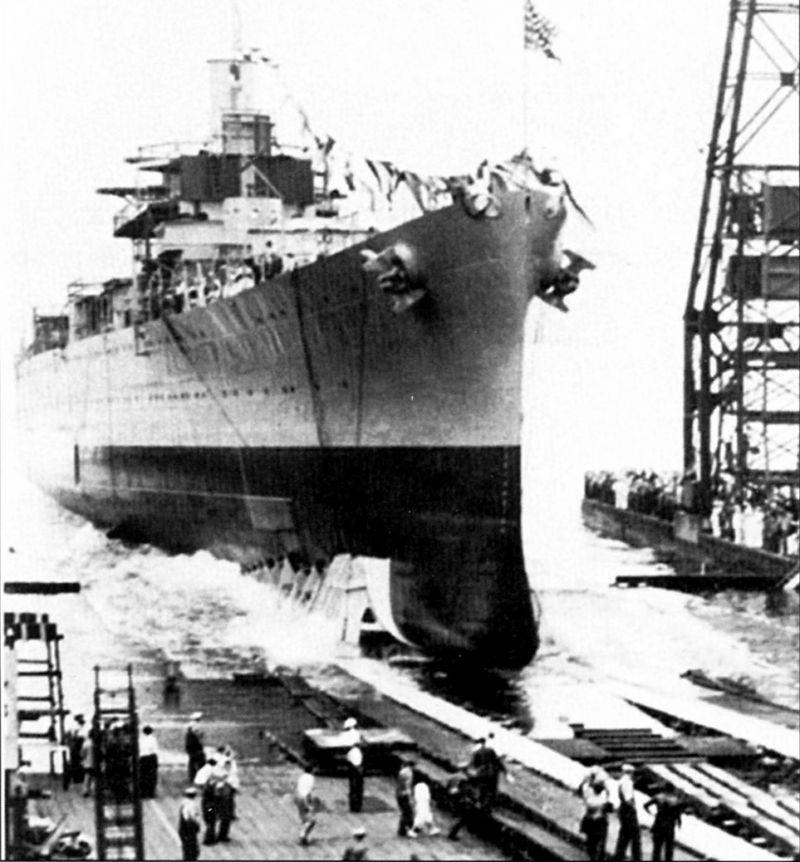 Launch of the cruiser "Helena"

The appearance of “Brooklyn” is due to the London Maritime Agreement (1930), which divided all cruisers into “light” (category A) with a caliber of guns to 155 mm and “heavy” (category B) with a main caliber over 155 mm. At the same time, the construction rights of the latter were tightened, which led the leading maritime powers to start building well-balanced cruisers with six-inch guns.

Despite the standardization of the main characteristics, the same main caliber and belonging to the same epoch, cruisers differed greatly in characteristics and size. At first, the Japanese were ahead of everyone with their five-tower “Mogami”. Unaware that “Mogami” is an eastern trick, the Americans rushed to create their own counterpart. It was only with the beginning of the war that the Japanese quickly replaced the three-gun turrets with two-guns with 203-mm cannons, in one instant translating the “Mogami” into the category of heavy cruisers.

And the “Brooklyn” and remained the only light cruiser in the world with a record fire performance.

Five towers of three guns each, in total - fifteen guns with automatic longitudinally-sliding shutter. To save space and accelerate the supply of ammunition to the guns, a three-level ring store was used inside the barbets of the GK towers. For their phenomenal rate of fire and density of fire, “Brooklyn” got on navy the nickname is “six-inch machine guns”.

Less is not always worse. Yielding to the “Washingtonians” in terms of the power of ammunition (two times the mass difference between 6 '' and 8 '' shells), the LCR of the Brooklyn type was considered ideal for night artillery duels. Where in a short time it was necessary to “feed” the enemy with the maximum amount of hot metal.

Universal caliber "Brooklyn" consisted of eight 127 mm guns. Anti-aircraft weapons continuously evolved; by the middle of the war, it consisted of 4 quadruple and 4 paired Bofors and 28 rapid-fire small-caliber Oerlikon machines.

Unlike its European and Japanese peers, the Brooklyn did not carry either torpedo or anti-submarine weapons. Pure artillery ship, PLO tasks were entirely assigned to the escort destroyers.

To support the operation of the air group, there were two gunpowder catapults, a crane and a under-deck hangar for four seaplanes. The stock of aviation gasoline was 23 tons.

Despite their “lightness,” these cruisers had good armor for their class. The short, but durable belt armor of the citadel stretched from 61 to 103 sp., Having a thickness of 127 mm (on the bottom edge of 82 mm). The belt had a height of 4,2 meters and was installed on top of a “soft steel” plating with a thickness of 16 mm.

Ammunition protection was performed according to an unusual pattern. Three-level shops were covered with barbet walls 152 mm thick. The ammunition cellar of the main turrets was covered by an underwater 50-mm belt. The cellars of the stern towers were defended by a longitudinal bulkhead thickness 120 mm. External traverse cellars had a thickness of 95 mm.

The horizontal protection consisted of a 50-mm main armored deck.

The power plant consisted of eight Babcock & Wilksos water-tube boilers and four Parsons jet tubes with a total capacity of 100 hp, which provided the cruisers with a speed of 000 knots.

Like all American ships, the "Brooklyn" possessed high autonomy and were well adapted for operations in the ocean. With a full supply of oil (2200 tons), the cruiser was able to pass 10 000 miles at a cruising speed of 15 ties.

It is curious that the total capacity of the on-board power plant “Brooklyn” (3600 kW) was twice the required power weapons and mechanisms. It was as if someone was planning to arm the warsaw cruiser in 1935. Joke. In combat conditions, the Yankees quickly realized the futility of this decision and limited power (two turbo-generators instead of four + two standby diesel generators).

The crew of the cruiser consisted of 868 sailors, but in combat conditions their number usually exceeded one thousand. Due to the presence of a solid deck instead of a short forecastle, it was possible to ensure sufficiently high standards of habitability for the crew. The officers were placed in single and double cabins, in the cockpits it was also not too crowded. Each sailor had a fixed bed and locker for personal items. On board the cruiser there was a well-equipped medical unit with an X-ray room. 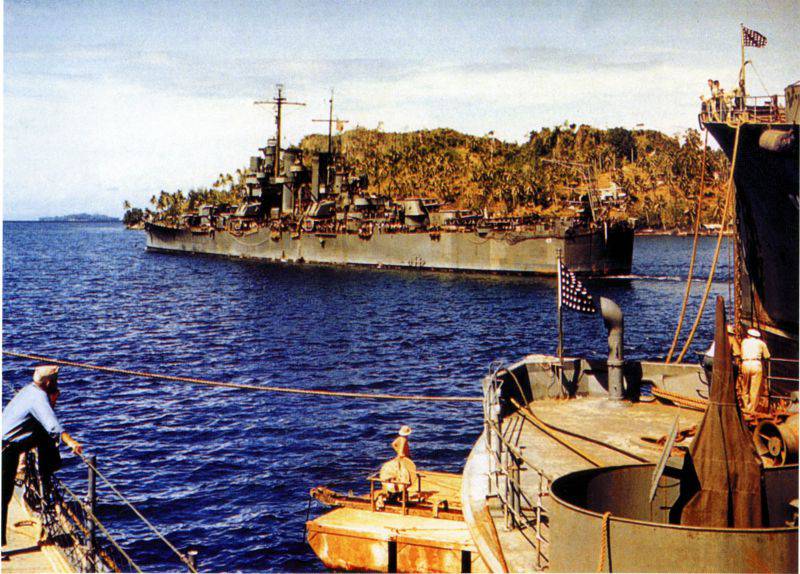 Nine cruisers of this type (seven original “Brooklyn” and two modernized LCR, assigned to the subtype “St. Louis”) earned 68 combat stars during the war years. All took an active part in the battles in the Pacific and European theaters of war. All received serious "wounds" from the actions of the enemy, but were again returned to the system. Not a single cruiser was lost in battle.

Among the famous episodes of their combat career:

- detonation of ammunition on the “Boise” cruiser in the battle at Cape Esperance (complete destruction of the nose, 107 dead);

- The kamikaze attack on the Nashville cruiser (the blast wave and splinters killed 133 people on the upper deck, however, the ship’s design did not receive any serious damage and it continued to perform the task);

- hit of the German guided bomb “Fritz-X” in the bow tower of the “Savannah” (Italian coast, 1943). The bomb broke through the 50 mm plate, flew through the entire structure of the tower and barbet and exploded in the cellar, knocking out the bottom. It took half an hour to put out the fire. Despite the serious damage and the loss of almost 200 people of its crew, “Savannah” was able to dock up to Malta, from where, after the ersatz repair, went under its own power for major repairs in the United States.

But the most famous история connected with the cruiser “Phoenix”. Happily survived Pearl Harbor, he still found his refuge on the seabed. Under the flag of a foreign country. 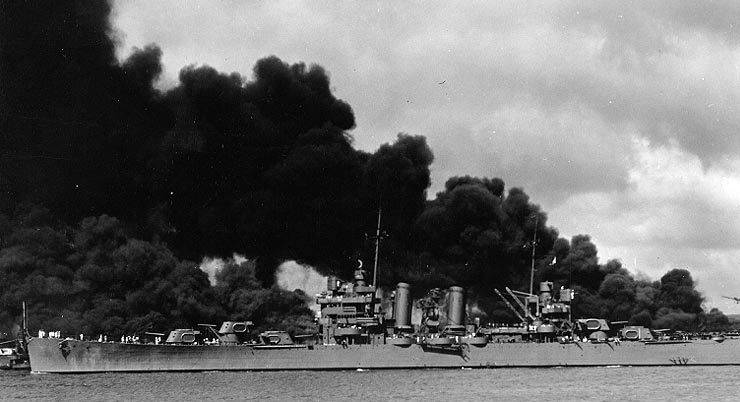 LCR "Phoenix" during the attack on Pearl Harbor

... The meeting with the frigates of Her Majesty promised to be short: “Belgrano” would have interrupted them all, like cardboard boxes.

The British had nothing to delay the cruiser. Neither powerful anti-ship missiles, nor decent artillery. What did the British 114 mm "pukalki" (one per ship) against the power of the artillery cruiser of the time of WWII?

The Britons could not even use the old proven method - launching anti-aircraft missiles at a surface target, within the limits of direct visibility, due to the lack of suitable SAMs (for the entire squadron there were only five destroyers with C Dart).

Deck Sea Harriers did not guarantee success either. As the experience of the war years showed, a cruiser of this type cannot be incapacitated by the hit of ordinary 500-fnl. aerial bombs The situation was complicated by the fact that in the year 1968 “Belgrano” was upgraded with the installation of two anti-aircraft missile systems “Cat Cat”. However, he still carried strong anti-aircraft artillery from the Bofors and the Oerlikon.

Just one hit from a six-inch gun could destroy any British ship (especially the one that burned out from the unexploded RCC). The six-inch projectile is not a joke: the 59-kg “pig” flying at two speeds of sound. When it explodes, a crater forms in the ground, deep in human growth.

There was only one possible option. Behind the stern “General Belgrano” an invisible shadow slid throughout the day - the nuclear submarine “Conquerror”.

4 May 1982 of the year 15: 57 submarine “Conquerror” produced a three torpedo salvo, becoming the first in the history of a nuclear submarine to sink a ship in real combat conditions. 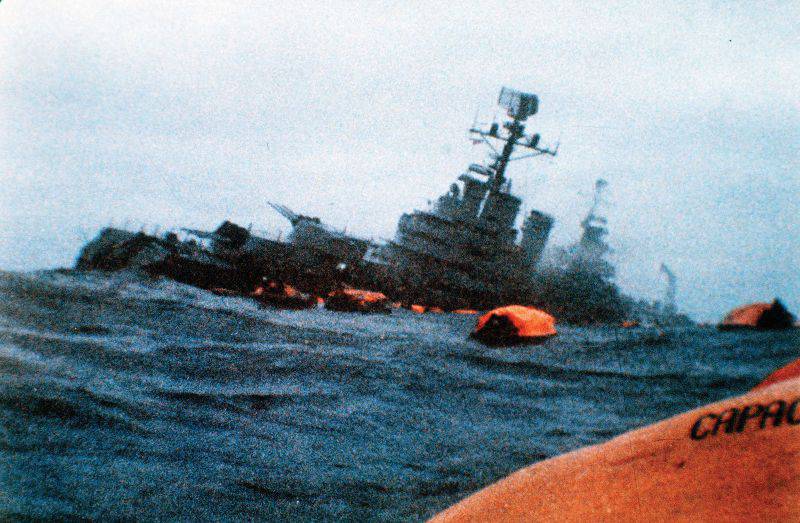 The explosion of the first torpedo tore off the bow of the Belgrano, the second made a 20-meter hole in the port side. The cruiser went under water, taking with him the 323 man from the 1093-x, who were on board.

It is curious that the uncontrollable British torpedoes Mark VIII of the 1927 model of the year became the cause of the death of the cruiser. Despite the presence of modern torpedoes “Tigerfish”, the submarine commander chose the old proven weapons. And it brought victory. Great shot, sir! Of the three torpedoes fired, two hit the cruiser, the third left a dent in the side of the destroyer Ippolito Bouchard (a misfire of a fuse). 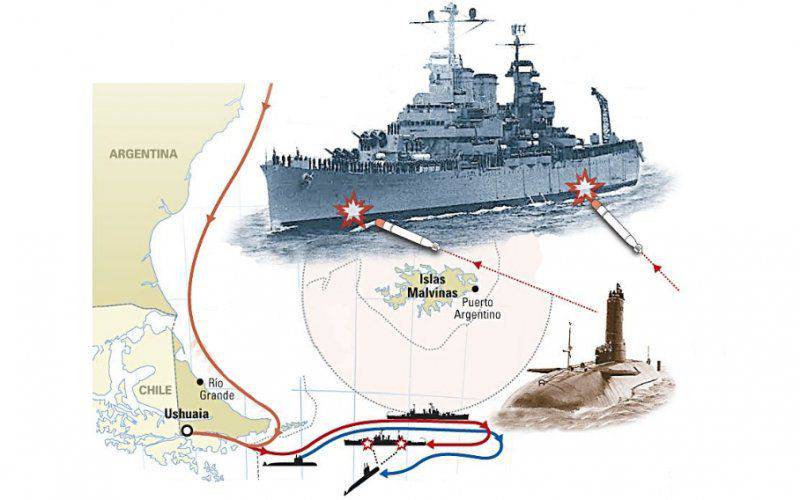 The cruiser was sunk outside the British declared 200-mile zone of the database. However, any insinuations about the legality of the use of weapons end in nothing. The meaning of the 200-mile “war zone” was to prevent casualties among civilian aircraft and ships of third countries. From a military point of view, this was a pure convention. An example of this is the sunken Belgrano. Reverse Example - Argentinean Combat aviationoperating from airbases on the continent.

One thing is certain - the shot of “Conqueror” predetermined the outcome of the war, forcing the Argentine fleet to return to base and not leave from there until the end of the war.

Ctrl Enter
Noticed oshЫbku Highlight text and press. Ctrl + Enter
We are
Europe is great, but nowhere to retreat before Asia: behind the AtlanticNuclear submarines in battle
183 comments
Information
Dear reader, to leave comments on the publication, you must to register.