January 25 2016
45
6 April this year in the Netherlands held a referendum in which citizens of the Netherlands crown will have to answer the question "And we need it?" This is a referendum on the association of Ukraine with the European Union. The Dutch referendum will be held even though the authorities of Ukraine itself have already managed to tell their citizens that the association with the EU is already a fait accompli.


If you believe the latest publications of the Dutch (and other European) public opinion polling services, then by this point about 67% to 75% of the Netherlands nationals are against associative urges with the most “independent” state in the world. And if such a result will be demonstrated on April 6, then both for Ukraine and for the European Union it will become, to put it mildly, embarrassing, for "# counted the maydan" ... Realizing that it’s not far from failure, and in Amsterdam, and even more in Kiev, they decided that with the public opinion of ordinary Dutch people “something must be done”.
Before you talk about what thoughts the authorities and public activists of Ukraine have matured, it is worth saying a few words about the referendum as such. According to Dutch laws, the expression of the opinions of the subjects of Holland is not particularly interested in the authorities of this country, which is considered one of the legislators of democratic fashion. Even if all the Dutch, including those "harsh Dutch men" who opposed the violence of migrants over the female sex in mini-skirts and women’s tights, vote against the Ukrainian Euro-Association, Prime Minister Mark Rutte can turn the sheet with the results of the referendum into a handful of torn paper and send this handful to the trash. Tse w European democracy ...

In general, the results of the referendum in the country of mills, cheeses and men in mini-skirts are advisory in nature, and therefore only recommend that the authorities do this and not otherwise. But the Dutch authorities do not want to lose face. After all, if three-quarters of the Dutch say Ukraine “No!”, Then this will be a definite blow to the image. And what kind of blow it is to Poroshenko’s “faberge” with Yatsenyuk, who have already trumpeted at all corners that Europe is literally dreaming of the associated membership of Ukraine, and there is no need to say.

So what politicians and activists decide to take, so that the results (at least externally) turn out to be digestible for both Kyiv and Amsterdam. Frankly, in Amsterdam, the Ukrainian theme, to put it mildly, is not in the first roles. Not at first, because for the average Dutchman, Ukraine is perceived as “a state somewhere between Libya and Afghanistan, due to a misunderstanding in Europe”. And the same average Dutchman is much more concerned with the question of where to park the bike today, but not at all the question of the Euro-associated membership of some Ukraine there. 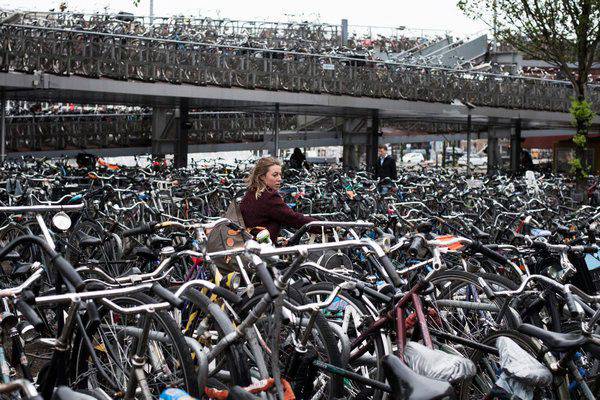 Prime Minister Rutte also didn’t add enthusiasm, who seems to think that Ukraine’s Euro-Association itself is useful for the EU and the Netherlands, but it makes Kiev understand that the abyss is insurmountable for Ukraine from association with the EU to EU membership. Here is his (Rutte) recent statement, which is submitted "Euronews":

We clearly explain to the Dutch public that we signed this agreement because it is in the interests of the Netherlands. First, being a trading nation, we can earn a lot of money when free trade with Ukraine is established. And Ukraine itself will be more successful than it is now, and this is also in the interests of the Netherlands. Secondly, we are talking about building a state, ensuring the rule of law and respecting human rights. For all this we are fighting in the European Union. Some people think that this is the first step towards joining the EU, but it is not. We have Association Agreements with the countries of Central America and the Middle East, and they do not apply for membership. Maybe for entry into the Eurovision Song Contest, but not in the European Union.

And in the words “Eurovision” in relation to the European membership of Ukraine, Rutte smiled broadly.

Individual characters in Ukraine believe that the Dutch must be convinced of the need to vote “For!” How are they going to convince?
Against the background of the increasing incidence of publications that Russian special services are influenced by the formation of public opinion (attention!), Russian special services and almost personally Putin (apparently, in the breaks between how he (Vladimir Putin) “picked up” a dose of polonium for Litvinenko, “Hid” from WADA the results of doping tests of Russian athletes and smashed granite boards installed in Rovno in honor of Bandera ...), Ukrainian activists suggest organizing “information assistance” to the Netherlands and the entire EU. Under this loud initiative, which is associated with the creation of a special fund with a loud name # SaveEU, svidomo audience "Square" subscribes. In one of the recently published on the Ukrainian portal "Observer" materials journalist Yuriy Romanenko encourages Ukrainian bloggers who speak the Dutch language to begin a series of publications of materials designed to tell the Netherlands how good Ukraine’s association with the EU will be.

From the material Romanenko:
I wrote about this back in October, that for the Ukrainian public sector it is an excellent platform to run into full technology to work with the outside world and create full-fledged working structures. It is also necessary to put pressure on the Foreign Ministry and the President to put an intelligent ambassador there in an expedited procedure, since the old one is leaving. Can you create a special fund? # SaveEU? whose task at this stage will be to collect resources and conduct a full-fledged media campaign in the Netherlands, involving journalists, experts, politicians in the discussion of Ukrainian issues, gather a pool of bloggers who speak the language and could work on the social networks of the Netherlands.

The call of the Ukrainian journalist was heard, and the Ukrainian blogosphere strenuously took over the Dutch ... On social networks there were announcements of the appearance of not only "correct" materials about Ukraine in the Dutch Facebook segment, but also information about the fast installation of billboards on the streets of the Netherlands cities, judging by advertising the Ukrainian "revolution of dignity." Apparently, now the Dutch will have to really plunge into that substance called “close attention of maydanutyh”, and see Poroshenko’s image with a piece of bus, photos of the famous “Yatsenyuk rampart, which is ravaging Europe from the invasion of Russian barbarians,” and many other things on the walls of their houses. .

It is also reported that the stars of Ukrainian show business will come to the Netherlands with concerts more often. Apparently, the “zirka”, singing without panties, is the deputy of the VRU Ruslana Lyzhichko, as well as Oleg Skrypka’s jumping “cry Vidoplyasov” and will become the “star” landing party who must convince the citizens of the Netherlands crown to show pity towards Ukraine and associate with her good ...

Ctrl Enter
Noticed oshЫbku Highlight text and press. Ctrl + Enter
We are
Situational analysis of the death of the MH17 flight (Malaysian Boeing 777), made on the basis of engineering analysis from 15.08.2014Results of the week. “Take off your hats! Expose the head! The body will be taken out now! ”
45 comments
Information
Dear reader, to leave comments on the publication, you must to register.