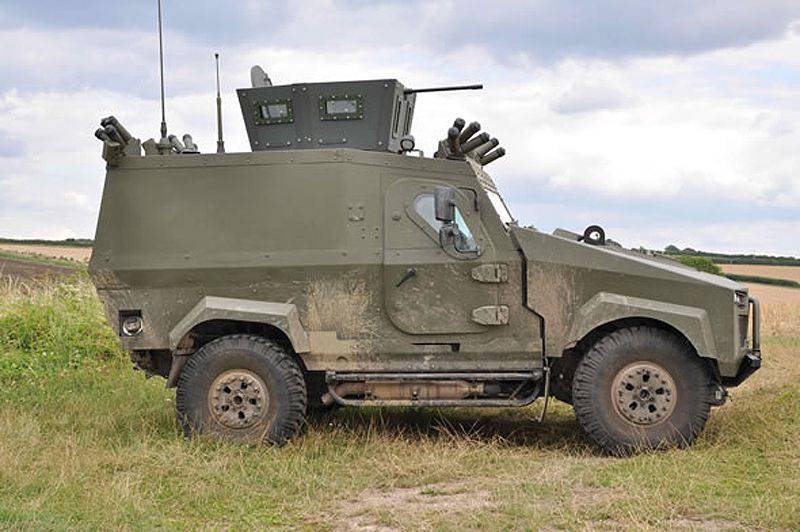 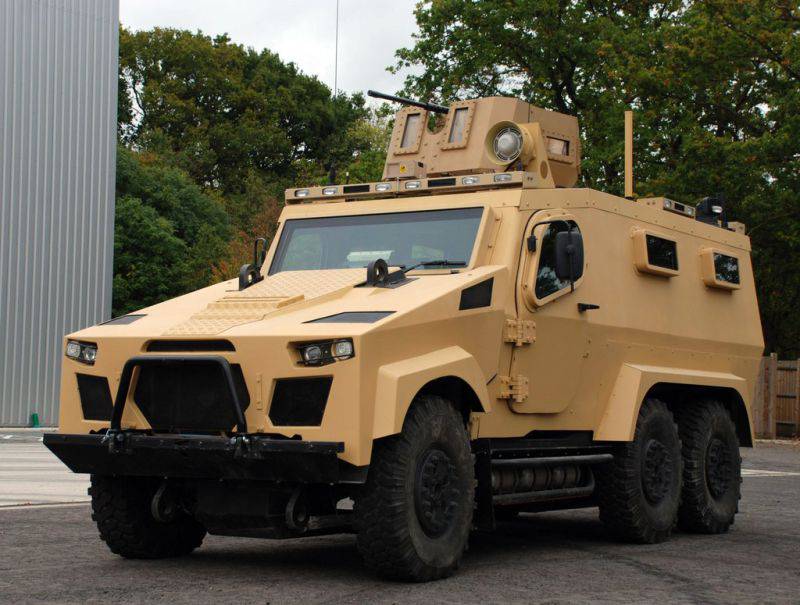 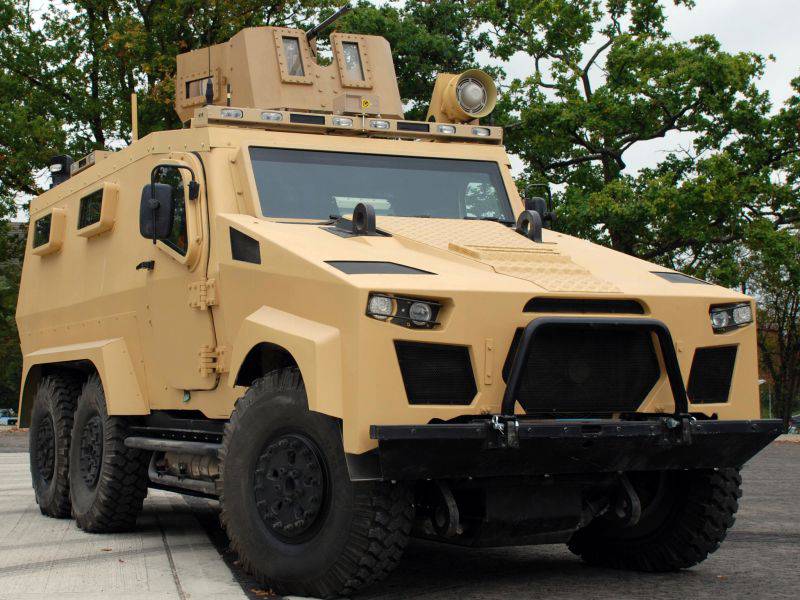 The first copy of the three-axis Creation SRVZX3 in the 6x4 configuration, equipped with a secure weapon system with an 12,7-mm M2 HB machine gun and cameras that increase situational awareness

The Zephyr Special Requirements Vehicle (SRV) armored vehicle for special missions was developed by Creation to meet future needs in a well-protected 4xXNNXX machine weighing up to 4 tons.

Development of the Zephyr SPV began in 2007 year, and by the middle of the same year, running tests of the basic design were completed.

In 2008, Creation decided to manufacture a batch of four pre-production Zephyr SRV machines; the first one was made in the middle of the 2009 of the year, after which it underwent extensive factory testing.

The Zephyr SRV armored car was first shown publicly at Defense Vehicle Dynamics exhibition held in the middle of 2009, and the fourth pre-production vehicle was manufactured at the end of that year.

Zephyr SRV was one of the claimants to the British claim for the Light Protected Patrol Vehicle (LPPV) lightweight patrol car, but did not take part in the trials that began in January 2010.

For the LPPV requirement, the main contractor for the Zephyr SRV car was Babcock Marine, which withdrew its application shortly before the start of the LPPV test. This fragile consortium bore the name Team Z for long.

In October 2010, the company Creation showed the latest addition to its base machine Zephyr SRV in the 6x4 configuration with three bridges, which was designated SRV ZX3.

The development of the SRV ZX3 began in the 2009 year with the funds of the company, the first copy was made by the middle of the 2010 year.

It is marketed along with the original Zephyr SRV 4x4 car, which is now called the Zephyr ZX2 SRV.

In April, Creation was acquired by Penman Group, 2011, but the Creation brand and manufacturing facilities in southern England were retained.

In September, 2011 was announced that an agreement was signed between the Penman Group and ERAF Industries from Saudi Arabia, according to which the Creation Zephyr 4xXNNXX and 4x6 MultiRole Vehicle (MRV) family will be manufactured in Saudi Arabia as part of technology transfer.

The first machine in the 4x4 configuration was delivered at the end of 2011, the machine was modified to meet the special requirements of Saudi Arabia.

This was followed by an armored car in Zephyr 6x6 configuration, which had a greater internal volume and carrying capacity and which I can perform more tasks.

ERAF Industries is part of the Fahad International Company, a leading Saudi specialist in the manufacture and modernization of armored vehicles.

The layout of the machine Zephyr SRV traditional, power unit with a diesel engine is located in front, behind it is a habitable compartment.

The basic version of the Zephyr SRV in the Urban Patrol (UP) urban patrol configuration has a crew of two people, a commander and a driver, plus four people in the rear compartment. All crew members have special seats that increase the level of vitality.

The car is equipped with a MAN diesel engine, coupled with an Allison five-speed automatic transmission. The Zephyr armored car is distinguished by a single-stage transfer case with locking differential developed by Creation, independent suspension with adjustable ground clearance and locking side-mounted gearboxes.

The hood leans forward to facilitate access, the complete power unit including the engine, transmission and cooling system can be removed in 45 minutes.

The engine compartment of the Zephyr STV is protected only by those systems that can cause the car to stop. A ballistic protection bonnet is being developed that complies with the STANAG 1 4569 Level.

The Zephyr armored vehicle has a built-in blast attenuation system that provides minimal anti-mine protection for the 2 STANAG 4569 Level. This level is ensured by a V-shaped bottom made of Armox 440T armored steel with a thickness of 10 mm, which is an integral part of the machine design.

The manned capsule of the habitable compartment is fully protected; based on the user's needs, it can be quickly replaced by another module.

All windows in the car are made of bullet-proof glass, landing and disembarking is carried out through the aft door opening to the right. The commander and driver have their own individual doors opening forward. Emergency sunroof provides escape from the machine in case of unforeseen situations.

Armored capsule provides protection from small arms fire. weapons and shards according to STANAG 4569 3 level. This level of protection was confirmed during factory testing.
The wheels of the Michelin 11.00xR16 XZL when a mine is detonated or an improvised explosive device (IED) is detached from the hull, which increases the survivability of the crew. The front part with the power unit also has mine protection due to the deformable design of the front section.

On the roof of the troop compartment is a hatch in which you can install various weapons, including light machine guns or remotely controlled combat modules.

Electric grenade launchers can also be installed on the roof to provide 360 ° coverage.

The complex monitoring the state and use of systems is integrated into the Zephyr armored car; the car can also generate electricity for external consumers with power up to 20 kW with the possibility of increasing it to 50 kW.

In order to meet the various needs of operators, Creation has several optional kits for the Zephyr SRV, including weapons, communications, a situational awareness kit, and an IED control device.

Especially for the Zephyr SRV armored car, a two-zone air-conditioning system was developed, which is installed as standard. Spare wheel can be mounted on the rear door.

A two-door version with a raised roof and a slightly elongated rear section can be used for a number of specialized tasks, such as, for example, a control center or an ambulance.

The option for special forces retains the protected lower part, but has an open top for all-round viewing with standard protective arcs. This option can be equipped with various weapons systems, including machine guns and automatic grenade launchers. 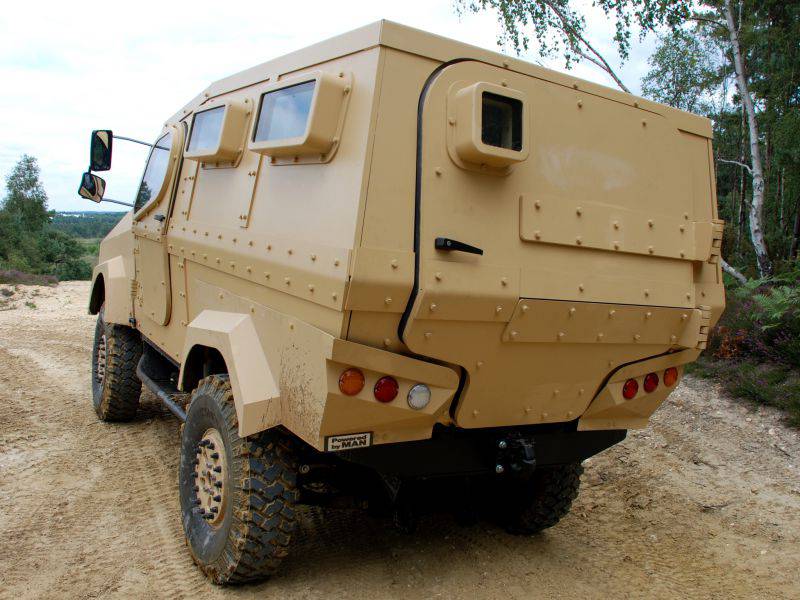 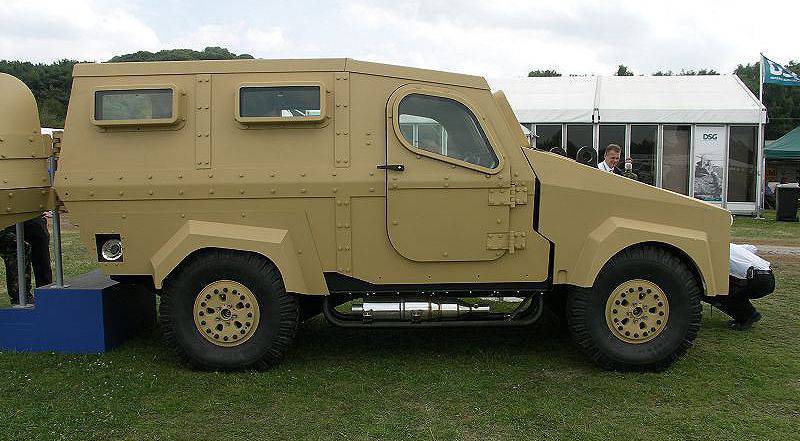 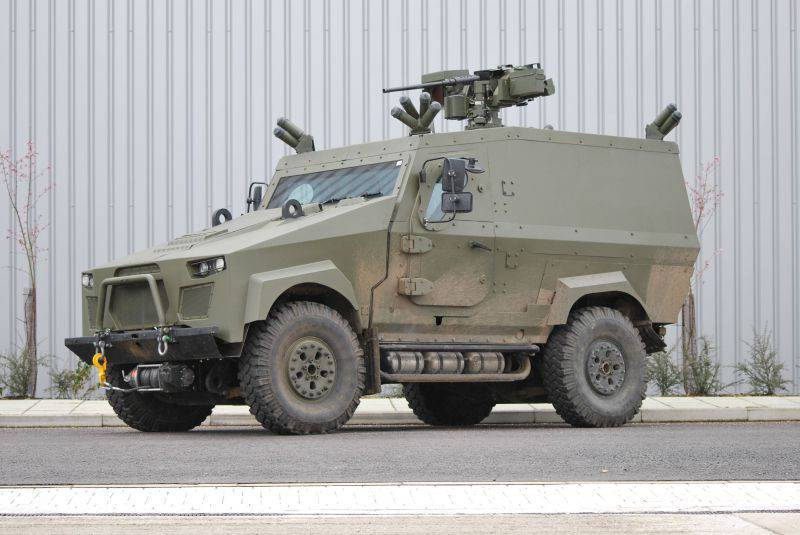 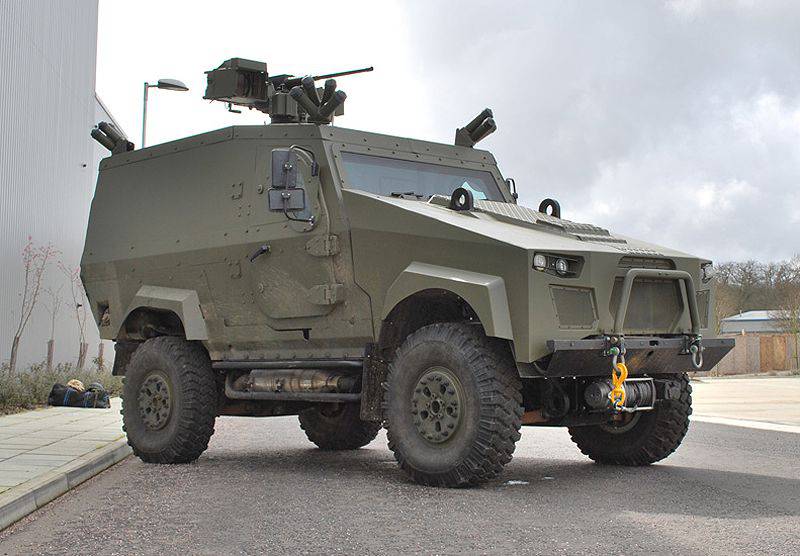 The equipment armor provides protection in accordance with the Level 3 STANAG 4569 from small arms fire in the basic configuration; the power unit installed in front has the protection corresponding to the Level 1 STANAG 4569.

The first copy of the SRV ZX3 is the crew of the driver and commander, sitting in front and paratroopers are located on the bench seats on the side of the troop compartment.

This option can carry up to 10 paratroopers, but their number is reduced when installing individual anti-explosion seats.

The first model has the right-hand drive configuration, but most of the future models will be left-handed.

The machine is also equipped with a secure installation of weapons with a machine gun 12,7-mm M2 HB and groups of smoke grenades.

The SRV ZX3 is equipped with a four-cylinder diesel engine with an 180 horsepower, coupled with a five-speed automatic transmission and a single-stage transfer case with a blocking differential. Installation of alternative power units is possible. Operating speed on the highway is 90 km / h, maximum speed - up to 120 km / h.

The gross weight of the machine is 12 tons, of which the carrying capacity is 4 tons, which includes the possible integration of higher levels of ballistic protection.

A high level of off-road terrain is ensured by installing an independent suspension; The fuel tank per liter allows you to have a power reserve of up to 361 km.

The 6x6 version has a smaller fuel tank and a correspondingly smaller power reserve, since the additional differential reduces the space around the fuel tank.

Standard equipment includes hydraulic booster steering, complex monitoring of the state and use of systems from Creation, air conditioning and power supply system for external consumers with power up to 20 kW.

On the basic version of the SRV, the crew’s armored capsule may be replaced by a new module that meets the needs of the operator.

For the Zephyr SRV ZX3 armored car, it is envisaged to develop specialized variants, for example, a universal pickup truck with a double cabin, an operational control vehicle, an ambulance, a towing cannon, a reconnaissance version and an open top version equipped with an armament installation kit (usually 12,7 mm machine gun), which present deployed by the British army. 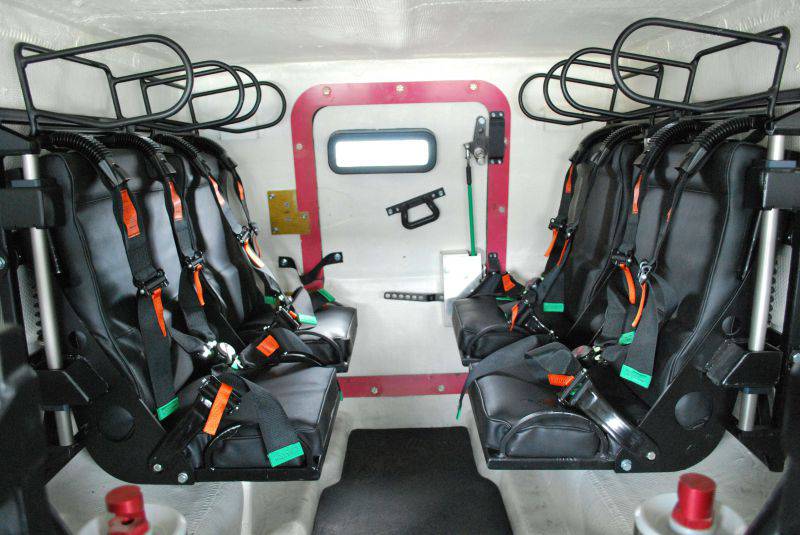 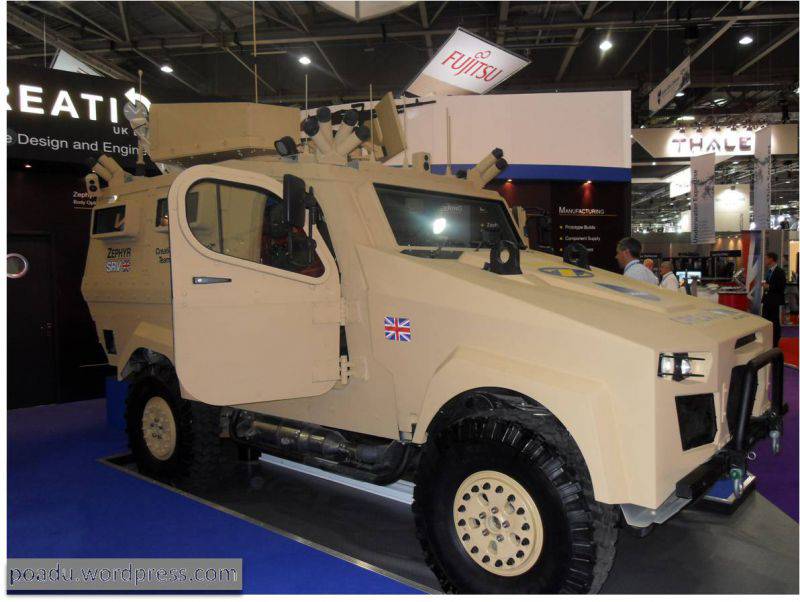 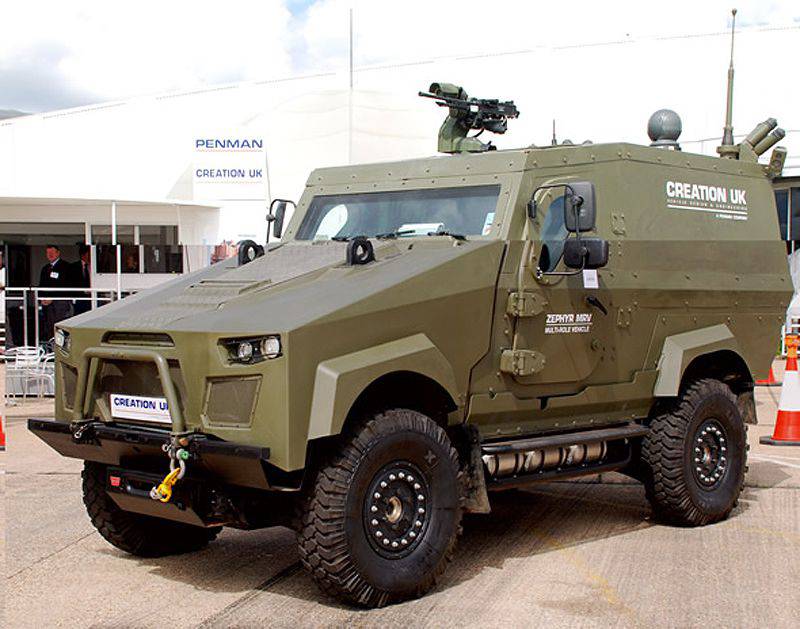