January 26 2016
31
Probably, people will never stop dreaming about a time machine, until it is invented. Why? Yes, because I really want to know, and how it was then. And not just to learn, but also to compare with how it is now. It became better or worse, we became richer or poorer and, most importantly, if “yes”, then in what. And so far, such a “machine” really exists only in the imagination of science fiction writers, and ordinary citizens and historians invent various ways to look into the past. Here you will find cinema, literature, museum exhibitions, archives, and also such an interesting source as ... old newspapers and magazines. After all, one can not only draw on “modern information” from them, but also see the manner of presenting materials, the degree of intellectualization of society, and much, much more. For example, in the 30-s of the last century there was no “Wikipedia” and people who were interested in technology had to wait for the release of magazines corresponding to their interests. One of these magazines in the USSR was the journal Science and Technology, published in Leningrad. And it is enough to open virtually any of them at random, as we will find in it a lot of interesting and - indeed, actual even today! Well, for example, now on the Internet there are disputes regarding the speed and seaworthiness of the new American destroyer Zumvalt. Well, for example, in the same 1937 year, the ocean races for the Blue Ribbon of the Atlantic, which took place in those years, attracted great interest, to which France joined at that time and ... managed to take away the palm from the British. And this is how 39 Science and Technology magazine for 1937 told the reader about this event ... 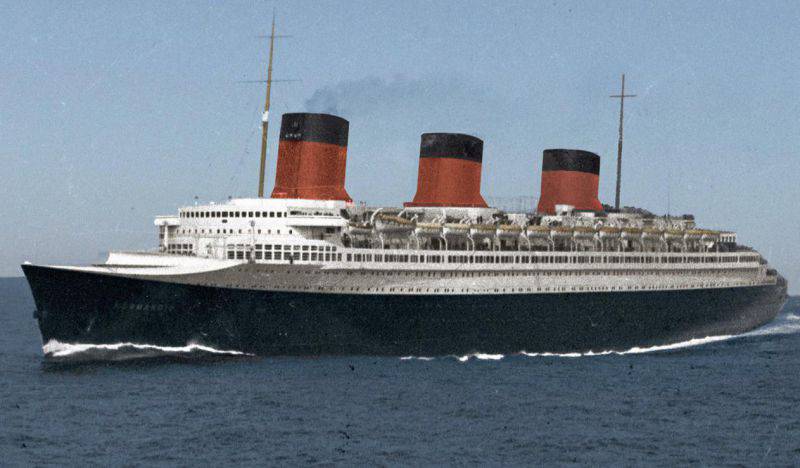 «History The struggle for the Blue Ribbon of the Atlantic Ocean has now been replenished with an extremely interesting event. At the end of March this year, the French passenger ship Normandy set a new world record for sailing speed from America to Europe and thus regained the speed prize. Until now, all ships, once deprived of the Blue Ribbon, never became its owners any later. The record of “Normandy” is all the more remarkable because it was staged in winter in stormy weather with head wind and snowfall.

What explains this seemingly unexpected success of the Normandy, which lost the Blue Ribbon last year, due to the launch of the new English super-powered steamer? What were the material resources of the "Normandy" to achieve such a high speed, if its turbo-electric mechanisms were significantly inferior in power to the Queen Mary turbines?

With the “Normandy” and “Queen Mary” flights, the latest stage of development of the transatlantic express movement began. These steamers their speed strictly correspond to the conditions of navigation between the ports of the English Channel and New York. Long-term experience of transatlantic shipping companies found that correct weekly flights across the ocean require four ships at a speed of 23 knots, with speed of 27 knots the number of vessels required reduces to three, and finally, at a speed of 30 knots for the same service two steamers. The construction of the "Normandy" and "Queen Mary" provided for the choice of this last option, which is advantageous both in terms of expenditure of funds and in attracting passengers. In accordance with this, the second high-speed steamer “King George V”, the future partner of Queen Mary, is being built in England. The enormous dimensions of both steamers are not at all excessive - this is only the necessary material basis for the development of this speed and for the placement of an economically advantageous number of passenger seats.

It should be noted that the practical implementation of the high speed of modern giant ships has been possible mainly due to the fall in oil prices. Over the past 10 years, the cost of this kind of fuel has decreased by 30%. In addition to cheaper fuel, of course, a great role was also played by the success of marine engineering, expressed in a decrease in the specific (by 1 hp) fuel consumption. Currently, the cost of fuel for the "Normandy" does not exceed those in the "Mauritania" in the last years of its operation, despite the fact that the latter did not have half the power of the mechanisms of the first. This fuel economy, however, does not yet indicate the commercial viability of building high-speed ocean express trains. Even the strong preference of the passengers of these ships and the very intensive workload of the shipping line is not able to recoup the cost of their construction. Giant steamships are systematically constructed in capitalist Europe at the expense of state subsidies in the hope of improving the affairs of the domestic industry and “supporting the international prestige of the nation.” 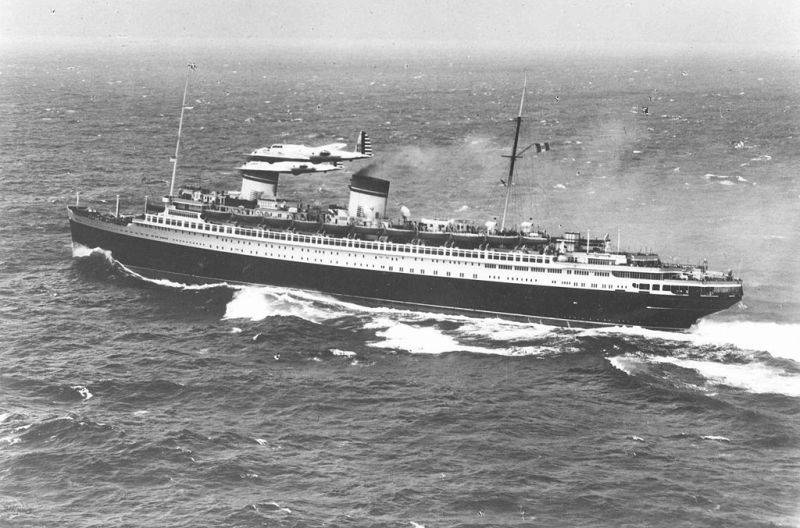 The general similarity between the two steamers is not surprising, since each of them was intended for operation on the same route, under the same sailing conditions. However, they differ significantly from each other constructively - both in the shape of the hull and in the type of their main mechanisms. As for the "Normandy", it is very different not only from the "Queen Mary", but also from any other modern ship. If we compare the hull of the "Normandy" with the hull of other transatlantic steamers, we can see that its relative width is larger in all cases. This goes against the numerous basic formulas, according to which the resistance of the ship hull increases in proportion to the increase in the midsection area (the largest cross-section). When designing the Normandy corps, significant deviations from the usual forms and proportions were made, which were firmly established in the practice of shipbuilding and whose repetition would be clearly erroneous. The body of the Normandy, especially its front part, has an original appearance through the use of a special nose shape, proposed by Ing. Yurkevich. Instead of a long, sharp, with a direct divergence of the sides of the nose, characteristic of all high-speed vessels, the front part of the Normandy hull at some distance from the nose has a concave waterline, and the nose (stem), being sharp, at the water level passes into the droplet-shaped thickening.

The hollows in the bow of the Normandy hull make it possible for the water to flow smoothly around the sides, and they also completely exclude the formation of nasal waves. To this is added the smaller height of the waves going from the middle of the body, and the smaller angle of their divergence. As a result, a large reduction in the power of the mechanisms spent on wave formation was obtained.

Obviously, a ship of such size as the Normandy will never meet in the open ocean with waves that would have its hull length (in the Atlantic Ocean, the longest wavelength rarely exceeds 150 m), so the lack of buoyancy in the bow and stern of the Normandy in relation to pitching is not terrible. On the contrary, the strong concavity of the sides to the bow of the steamer only improves its seaworthiness. "Normandy" cuts a wave through and throws it to the sides, leaving the upper deck dry even in stormy weather. The speed of the "Normandy" is so great that the period of its pitching motion can never coincide with the period of the oncoming wave, due to which the amplitude of oscillations is quenched. 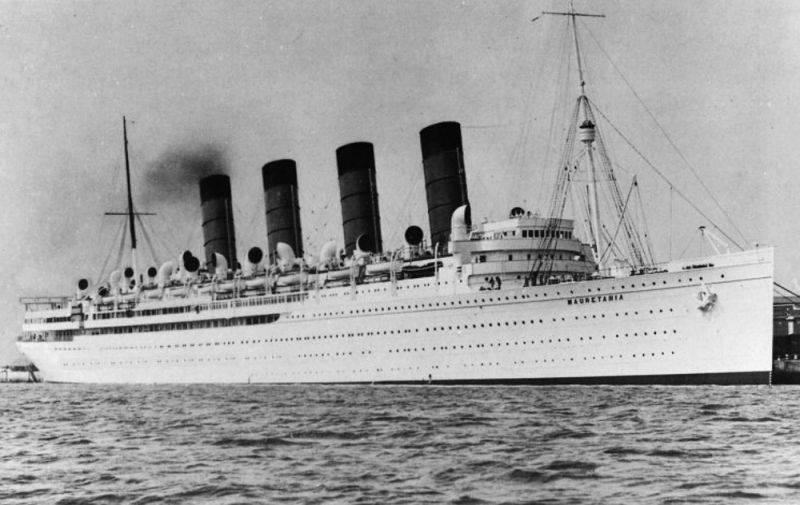 "Mauritania" in the 30-s of the twentieth century.

The effective form of the corps "Normandy" and gave her the opportunity to overtake the "Queen Mary". Thanks to this shape of the hull and careful selection of the shape of the outlets of the propeller shafts and the propellers themselves, it was possible to win up to 15% reduction in resistance compared to the normal shape of the hull. At the Normandy, the turbines were transferred electrically to the propellers in order to provide passengers with the greatest comfort: with the electric system, hull shaking and noise are minimized. If mechanical transmission is more profitable in terms of weight, volume occupied, and fuel consumption at full speed, electric transmission is more economical at medium speed and makes it possible to report full revolutions to the screws during reverse. The only drawback of electrical transmission is increased cavitation — a particularly harmful phenomenon that lowers the efficiency of propulsion and quickly destroys propellers of high-speed ships. This is due to the high speed of rotation of the screws, and the high speed of rotation of the screws during electrical transmission is inevitable due to the inability to increase the already huge electric motors. During the recent repair, the Normandy received propellers of a new original shape, the oblique arrangement of the blades of which significantly improved the water supply to them. The new screws have a diameter of 4,84 m and rotate at a speed of 230 revolutions per minute. Although this is a very high speed, however, thanks to the successful form of their cavitation was able to reduce to a minimum. 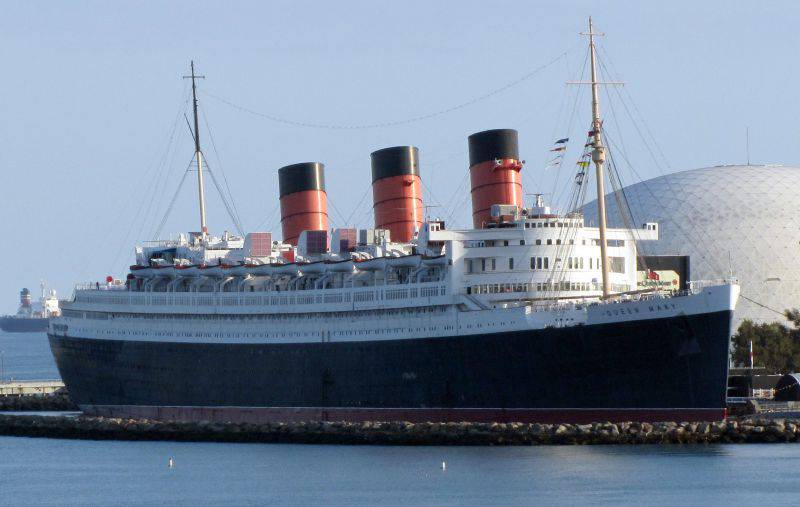 The "Queen Mary" hull is very similar to the hull of its old predecessors - the famous steamers Cunard - "Lusitania" and "Mauritania". For Queen Mary, the normal shape of the hull was adopted, the contours of which were only slightly modified as a result of careful and numerous experiments. The mechanical transfer of turbine work to the propellers, carried out at Queen Mary, greatly simplified the solution to the problem of fighting cavitation, since it was not difficult to reduce the speed of rotation of the screws by increasing their size. "Queen Mary" is built very solidly and thoroughly, as indicated by the insignificance of alterations on it after the first season of operation. On the contrary, the Normandy had to be removed from the line for a long time and rebuilt in order to eliminate the strong vibrations that arose due to the insufficient rigidity of the stern design. In general, it can be said that the British showed great conservatism and caution in designing their giant ship and in this respect were the exact opposite of the French. 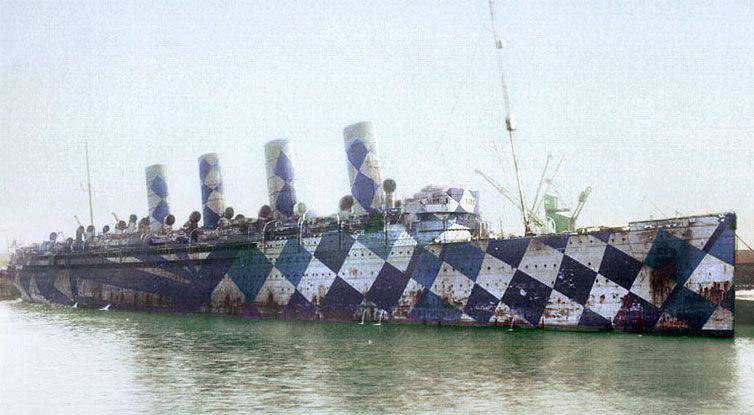 "Mauritania" during the war in camouflage.

"Queen Mary" reached the factory tests on the measured mile speed in the 32,82 node while bringing the power of mechanisms to 214 thousand horses. forces, while the "Normandy" showed in the same conditions 32,12 node with power only in 179 thousand horses. forces Thus, the first in preponderance in 35 ths. Horses. Forces had an advantage only in the 0,7 node. This points to the remarkable advantages of the special form of the Normandy corps. The main mechanisms of the "Normandy", apparently, were designed to provide a large reserve capacity, or partially undergone some re-equipment last winter, as there is every reason to assume that during the last record voyage, it developed 200 times thousand horses at times. forces If this is the case, then at present Normandy, having high-performance screws and an experienced machine crew, can develop speed on the measuring mile to 34 nodes.

Ctrl Enter
Noticed oshЫbku Highlight text and press. Ctrl + Enter
We are
Father toldSquadron "Normandy - Neman" on the fronts of World War II
31 comment
Information
Dear reader, to leave comments on the publication, you must to register.