The failure of the scout Rezun

January 26 2016
224
In a lie, and especially in a big one, it is very easy to get confused. The best way to prevent you from being caught on this very lie is to confuse the person you are lying to. Viktor Suvorov (Rezun) masterfully used this method from the first brick in the construction of his large-scale falsification stories World War II, confusing the reader from the very first book, from the very first page. A credulous reader, not burdened with sufficient knowledge of history or knowledge in general. Not really able to think ... 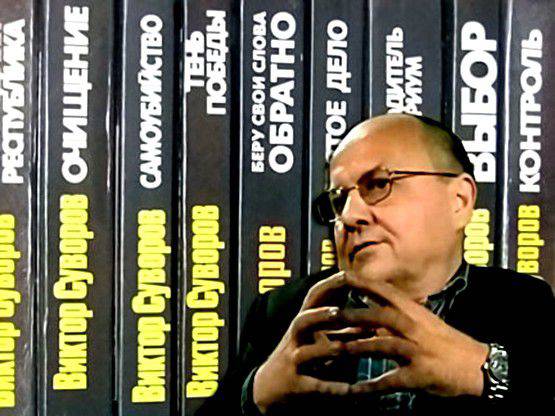 Such people would hardly ever have the opportunity to reflect alone with the luminaries of historical science about the past, slowly drinking tea with him in a cozy atmosphere. And Viktor Bogdanovich, as the brightest body of two sciences at once, historical and military (he is Suvorov!), Graciously provides such an opportunity. And you will pour the seagulls yourself so that you will not be distracted from this conversation over all sorts of trifles. And you are "together" with him come to the brilliant conclusion!

Rezun-Suvorov repeatedly emphasized that his versions and conclusions are based on all available materials and facts. Of course, not every reader understands that facts can be juggled in their own interests. For example, considering them in isolation from other facts, as if the latter do not exist. It also mixes truth and lies, to make a lie more "truthful." Probably, I do not discover America, but if we talk about Suvorov, he is almost a “pioneer” in the large-scale falsification of the history of the Great Patriotic War in the former USSR. And his example was followed by many other falsifiers in Russia, Ukraine, etc., taking the methods described above into service.

This article threatens to be very long if I take on the analysis of all the “flights” of Viktor Bogdanovich. Instead, I will focus, as I believe, on the main thing in his “writings”. The brightest luminary of historical and military science slipped, first of all, not on history and military science, but on its own "craft" - intelligence. If you believe Viktor Rezun in his “research work” so to speak, it turns out that the role of intelligence in military affairs is very small. Constructing its own version, according to which the USSR allegedly prepared aggression against Germany (this version is the main jewel in the “legacy” of the author under discussion) and that the latter, with a “preemptive strike”, just a few days ahead of the Soviet invasion, Rezun-Suvorov does not provide on the conduct of the Red Army reconnaissance measures by the forces of the same aerial reconnaissance in the interests of this invasion.

But with the conduct of reconnaissance activities, indicating preparation for the invasion, everything was in order just the same with the “defending” side - Germany. The figures are very revealing: from March 27 to April 18, 1941, 80 cases of violation of the USSR airspace by German planes were recorded. These "lost" (according to the German leadership) aircraft shot military objects on film. In particular airfields. It is no accident, after all, attacks on the objects of the Soviet military infrastructure in the first hours of the war were carried out by the German aviation as in writing.

But Rezun for some reason does not compare the actions of the “failed aggressor” with the actions of the “defending” Germans, and the Soviet airfields in the west of the USSR appear as “evidence” of the planned attack on Germany. Well, I really hope that a book devoted to the Stalinist doctrine of “blind air strikes” will be published by PROFESSIONAL SCIENTIST Viktor Suvorov.

Ctrl Enter
Noticed oshЫbku Highlight text and press. Ctrl + Enter
We are
About Stalin and KhrushchevWhat you didn't want to know about England
224 comments
Information
Dear reader, to leave comments on the publication, you must to register.