February 2 2016
25
Alteration of obsolete equipment, still suitable for operation, but not meeting modern requirements, is a very interesting process. In the course of such projects, unusual solutions are often proposed that could hardly be used under other conditions. In addition, such projects sometimes become a kind of platform for experiments. So, a few decades ago, Swiss industry, wanting to keep outdated Tanks, developed the Centurion M-0907 Bunker project.


By the early eighties, British-made Centurion tanks had become obsolete, and their prospects as full-fledged combat vehicles became a subject of controversy. Nevertheless, a large number of such equipment was at the disposal of the Swiss army, which made the military and engineers look for ways to use it in auxiliary roles. The appearance of one of the proposals contributed to the plans of the military department for the construction and development of various fortifications in strategically important areas. To protect against a possible attack from third countries for several decades, various bunkers, long-term firing points, etc. were built. facilities that were supposed to protect strategically important areas. As part of such protection complexes, it was decided to use tank units.

Back in the years of the Second World War, stationary firing points were often carried out in the form of a tank tower installed on the corresponding structure. This approach was proposed to be used in the construction of new firing points. At the same time, however, several original innovations should be applied, relating both to the architecture of the objects and the alteration of the existing equipment. It was assumed that all this will allow protecting the important objects from the enemy with minimal expenses. 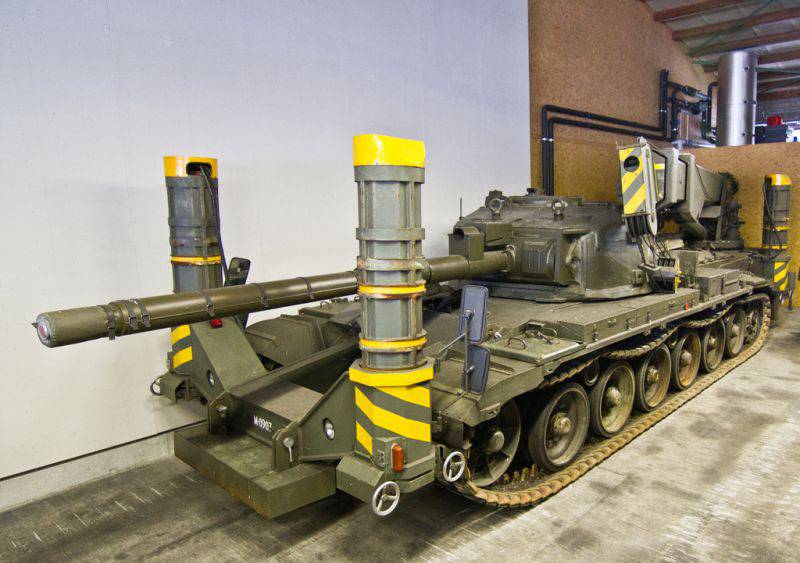 Tank towers were proposed to be mounted in caponier unified architecture. In the required area, it was necessary to build a full-fledged bunker with calculation rooms, ammunition, etc. In a separate caponier of such a bunker there should have been a tower of an obsolete tank. In this case, the firing point received an 105-mm rifled gun, which under certain circumstances could be a very serious threat to the enemy. In most cases, the caponier for the tower should have side walls and a roof. This limited the firing angles, but allowed to protect the tower from enemy fire.

Probably, during the design of such firing points, the question of delivery and installation of tank turrets arose, which led to the creation of an original modification of the tank. A large part of the bunkers should be located in places inaccessible to automotive technology. Thus, even at the construction stage, some special machines were needed that were able to deliver the tower to the right place and install it on the caponier's shoulder strap. In order to save money, time and effort, it was decided to make such a conveyor of weapons on the basis of existing tanks. 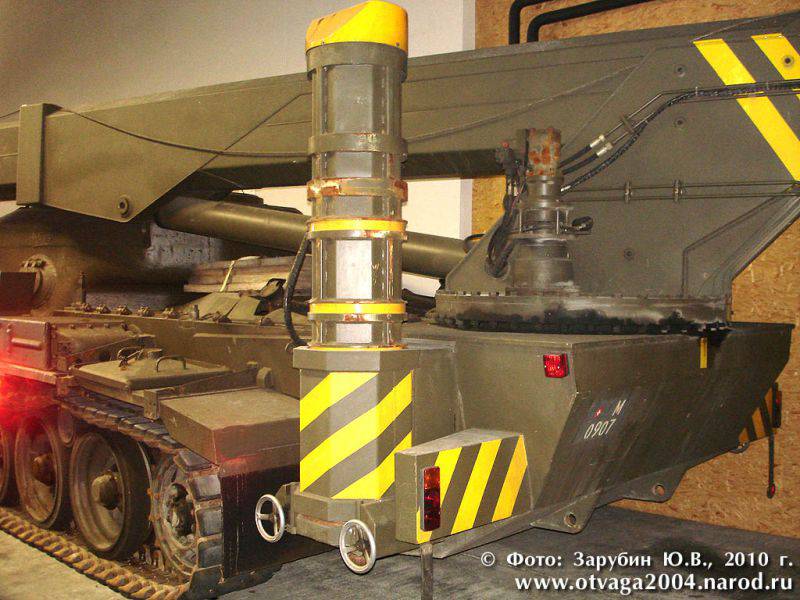 The stern of the tank carrier with outriggers and a crane. Photos Otvaga2004.narod.ru

The construction project of firing points based on the towers of tanks "Centurion" implied the release of a large number of chassis of these machines. They were proposed to be used to transport the tower. The tanks should be equipped with a set of additional equipment, with the help of which they could solve the tasks and literally take off the tower, installing them in caponiers. It should be noted that this feature of the Centurion M-0907 Bunker project may be a cause for confusion. Due to the specific appearance, such an arms transporter is often mistakenly called a self-propelled crane or an evacuation vehicle that retains the weaponry. Nevertheless, it is a vehicle with its own crane equipment, designed for solving specific tasks for the construction of bunkers.

The project M-0907 "Bunker" meant the development of a complex of relatively simple equipment, with the help of which the serial tank Centurion could turn into a self-propelled crane with the ability to transport a full-fledged tank tower. As a result of the project, two units with special equipment appeared that allowed the tank to perform loading operations. The design of this equipment provided for the use of some unified units used in the composition of both units. 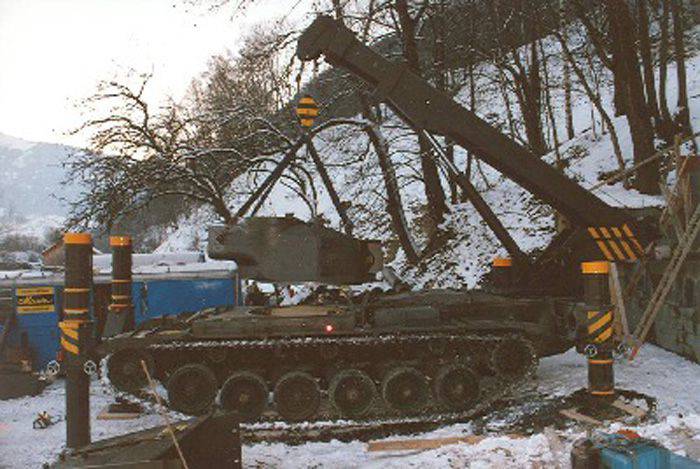 On the frontal part of the base tank, it was proposed to mount a special block with outrigger jacks. Directly to the frontal parts of the body was attached platform with V-shaped mounts for vertical hydraulic cylinders. It was proposed to install two more cylinders on the rear aggregate. Due to the large weight of the tank, the outriggers had to be equipped with powerful and large cylinders. They had a diameter of at least 0,5-0,6 m, and their upper ends were located even above the roof of the tower. At the same time, the high height of the cylinders allowed the tank to be hung out exclusively on outrigers, while the tracks fully rose above the supporting surface.

The aft additional unit was large and received a different composition of equipment. Its main detail was an oblong rectangular body, on the sides of which two hydraulic cylinders of the supports were fixed. Directly between them placed a slewing device of a crane. A crane with hydraulic actuators could turn around its axis, lift the boom to the desired angle and change its length. Due to the large mass of the alleged cargo, the boom and hook were equipped with a tackle.

During the installation of the new equipment, the base tank did not undergo any noticeable changes. Because of the need to dismantle the tower, some systems, etc., were disconnected, but the design of the hull, powerplant or chassis did not change. Installing a new relatively heavy equipment should have led to some deterioration in mobility, but such losses were not critical due to the “non-military” use of the machine. 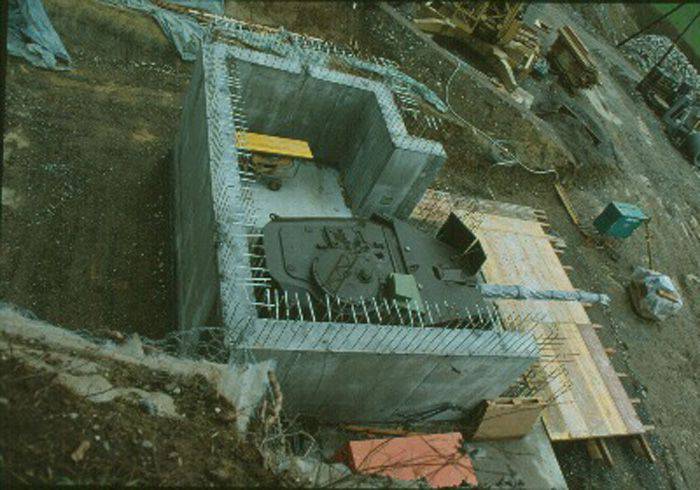 The Centurion M-0907 Bunker weapons transporter was supposed to work as follows. A machine with special equipment was supposed to come under its own power to the construction site of the bunker. Further the conveyor should be hung out on support and to prepare the crane for work. With the help of the latter, it was proposed to remove the tower from the hull and install it on a caponier that had been prepared in advance. After that, the crane and the supports could be turned to the stowed position. All other work had to be done by the builders: they had to connect the tower to the bunker’s communications, check weapon etc. In the future, it was possible to put a new tower on the conveyor, take it to the installation site and install it in a caponier. Thus, the troops and builders did not need a large number of special equipment based on the existing tanks.

According to reports, at the time of the appearance of the project Centurion M-0907 Bunker planned to build a hundred bunkers with tank turrets. To carry out work on the transportation and installation of towers intended to convert several tanks, equipping them with additional modules with supports and cranes. Subsequently, funding cuts led to a reduction in the plan to 50 “tank” bunkers. Finally, by the time the construction began, plans were again reduced. In the late eighties and early nineties, only two dozen caponiers with towers were built. 17 constructions covered various objects, three more were educational. The reason for the last reduction of the plans was the unification of Germany, the withdrawal of Soviet troops from the GDR and, as a result, the reduction of the risk of armed conflict. 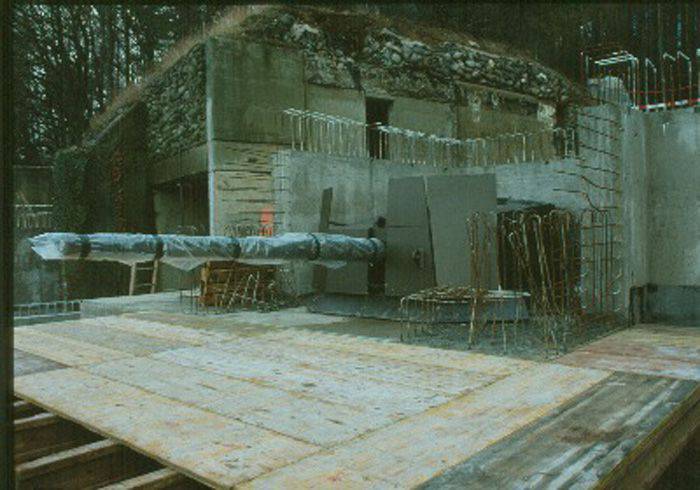 Unfinished caponier with a tower. Until the end of construction, the barrel will be protected by a film. Photo Unterirdischeschweiz.ch

According to some sources, during the Centurion M-0907 Bunker project, only one Centurion tank was converted into an armament transporter, which was actively used in the construction of bunkers. The pace of construction made it possible to manage with one machine with special equipment and not to collect additional ones. After completing the construction of two dozen facilities, the weapons transporter tank was laid up. Later he was sent to one of the museums, where he still remains.

The construction of two dozen tank turret bunkers was completed in the mid-nineties. These objects were supposed to cover various important areas and were built in the event of a large-scale conflict in Europe, but the normalization of the situation in the region made them simply unnecessary. The Swiss Army continued to use bunkers with towers until 2003, after which they removed these objects from duty. According to some reports, now part of the bunkers is open to tourists.

The project Centurion M-0907 Bunker was developed to protect important areas from enemy troops, and was also designed to use obsolete armored vehicles. To solve these problems, extremely unusual solutions were proposed, including the conversion of tanks into self-propelled conveyor cranes. Such an original idea made it possible to find an application for the old technique, to improve the protection of important objects, and also to dispense with the construction or purchase of a new special technique. However, by the time the bunkers began to be built, the situation in the world had changed, because of which their need had become a subject of controversy. As a result, the operation of the refitted tank with a crane and bunkers built with it, lasted only a few years. Now all the surviving elements of the project "Bunker" are museum exhibits.

Photoreview of bunkers, incl. Photos from construction (in German):
http://unterirdischeschweiz.ch/86834.html