FT journalists write that Igor Sergun allegedly received a response from the Syrian President, in which he “rejected Moscow’s proposal”, and said that he would bring the political settlement process in Syria to a logical conclusion. The publication at the same time refers to two unnamed representatives of Western intelligence, who are allegedly aware of the fact that "Putin asked Assad about his resignation from the presidency." 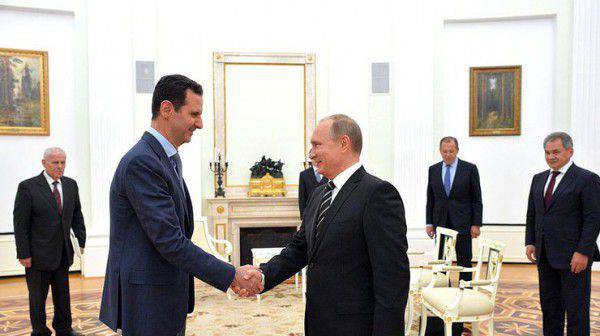 It is believed that the more successful the Syrian government forces will be supported by the Russian military aviation, and the more efficiently the RF Armed Forces carry out a humanitarian operation in Syria, the more often all kinds of stuffing will appear in the Western media for the sole purpose of at least trying to drive a wedge between Moscow and Damascus. It is also noteworthy that such a fling appeared a few days before the start of the Vienna meeting to resolve the Syrian conflict.

Ctrl Enter
Noticed oshЫbku Highlight text and press. Ctrl + Enter
We are
157 comments
Information
Dear reader, to leave comments on the publication, you must to register.