January 29 2016
41
American gunsmith Maxwell Atchisson is known to the general public as the developer of the AAS and AA-12 automatic rifles. Experts also know him as an active participant in the development of a number of small-caliber and small-caliber artillery samples. weapons. However, Atchisson’s design activities were not limited to these developments. In the fifties and sixties, this engineer created several of his own projects of submachine guns, which, however, did not leave the test stage.


Unfortunately, very little information has been preserved about the development of M. Atchisson. The prototypes of the original weapons were completely lost. For this reason, at present, one has to rely only on fragmentary information and a few drawings or photographs. For example, the original small-caliber submachine gun remained in only one photograph. Nevertheless, M. Atchisson’s weapon is of great interest with historical points of view.

The first known development of M. Atchisson in the field of small arms was the submachine gun of type 1957, created in the second half of the fifties. Within the framework of this project, the gunsmith developed a fairly simple weapon suitable for solving the assigned tasks. Apparently, one of the main goals of the project was to maximally simplify the design and reduce the size of the weapon. For this reason, the Model 1957 submachine gun has received several characteristic features. 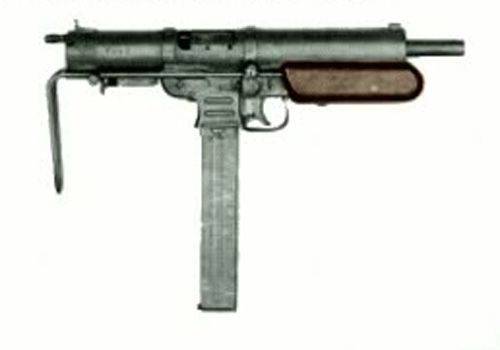 The appearance of some parts suggests that the promising weapon was not developed from scratch, and in its design some parts borrowed from other samples were used. For example, it was proposed to place a detachable box magazine in a small reception shaft with a characteristic extension at the bottom and side recesses, which makes it possible to suspect the use of parts of a German MP-38 / 40 submachine gun.

The basis of the design of the submachine gun arr. 1957 was a tubular receiver, inside which were placed all the main parts. From below, an oblong casing with a firing mechanism and a shop shaft was attached to it. An interesting feature of this weapon was the absence of a separate pistol grip. Hold a submachine gun was offered for the store, located right behind the trigger. For comfortable holding with two hands on the lower oblong housing a wooden forearm was provided.

In front of the receiver was placed rifled barrel caliber 9 mm long 203 mm. Behind the barrel housed the bolt and return-combat spring. The shutter was made in the form of a massive cylindrical block with a drummer on the front surface. Apparently, when assembling weapons, the bolt and spring were placed in the receiver box through the rear end, which was closed with a round cover.

The submachine gun had an automatic based on a free shutter. Under the action of a recoil pulse and a spring, the shutter had to sequentially move back and forth, carrying out the process of reloading and firing. Locking the barrel was not provided. In the lower case, located under the receiver, there was a trigger mechanism with several modes of operation. Above the trigger was displayed flag fuse-translator fire. With it, USM could block and also switch to single or automatic fire.

The Atchisson Model 1957 submachine gun was supposed to use Parabellum 9x19 pistol cartridges. Due to the medium length barrel, it was possible to ensure the initial speed of the bullet at the level of 360-365 m / s. The firing range was declared at the level of 200 m, however, effective fire could be conducted only at smaller distances.

The supply of ammunition was to be carried out from box magazines on the 32 cartridge, placed in the lower receiving shaft of the weapon. During firing, the bolt independently sent the upper cartridge from the magazine to the chamber, and after the shot, threw the spent cartridge through a window in the upper surface of the receiver.

The Atchisson submachine gun had a distinctive design that affected the convenience of its retention. During the shooting, the weapon should have been held by the store and its shaft, as well as by the wooden forearm. For confident aimed fire, the shooter could use a butt. This device was made in the form of a curved metal rod. The front straight ends of this rod were included in the mounting on the receiver, which allowed to put the butt, moving it forward. At the same time, the frame back plate remained under the back of the box.

Probably, at least one experienced submachine gun of the new model was used, which was used in the tests. However, accurate information on the number of weapons produced and the results of inspections are not available. It can be assumed that the project was recognized as unsuccessful and unpromising. For this reason, the prototype (or samples) was disposed of as unnecessary. To date, only a few images of these weapons and a brief description have survived.

Already in the sixties, Maxwell Atchisson began work on a new project of a submachine gun. This weapon was planned to be used for training purposes, which affected its main features. So, in view of the absence of the need for high firepower, it was decided to use the .22 Long Rifle cartridge. Such ammunition allowed the necessary efficiency to prepare shooters with minimal expenditure on ammunition. The applied cartridge influenced the name of the weapon: in a number of sources it is designated as .22 SMG (“Submachine gun .22”).

Unfortunately for historians and weapons lovers, only one photo of the Atchisson submachine gun under a small-caliber cartridge has been preserved. Available descriptions also do not differ in detail. However, this sample is worth considering. 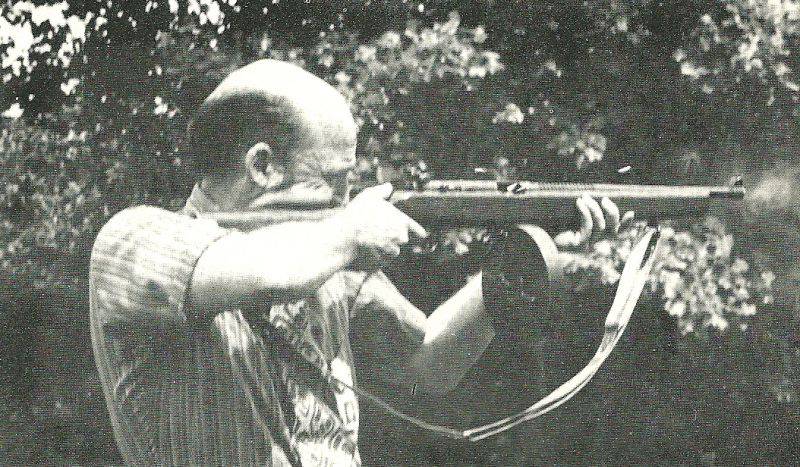 The only image of a submachine gun chambered for .22 LR. Photo by Augfc.tumblr.com

As can be seen in the existing photo, the proposed submachine gun should have several basic features. For ease of use, he received a full-fledged wooden box, similar to that used on rifles. Another curious feature of the weapon was the drum shop for 70 cartridges. Due to the relatively small size and weight of the selected ammunition, it was not possible to place a significant amount of ammunition in the largest magazine. From the available data it follows that the body of the store consisted of two main parts: the main cylindrical and a small upper rectangular. The latter was intended to be placed in the receiving window of the box and the receiver. This design of ammunition systems also did not preclude the use of existing box stores.

The details of the .22 SMG M. Atchisson's design are unknown. Apparently, the automatic for automatic pistol-machine guns based on the free gate, which could work correctly even with a relatively low-power cartridge, were used. In this case, all the details of automation were placed in the receiver, mounted on the bed. The trigger mechanism probably allowed firing single or bursts, and also equipped with a fuse.

The only remaining image of a submachine gun chambered for .22 LR suggests that Atchisson and his colleagues produced at least one prototype of the new weapon and conducted some of its tests. The photo clearly shows that the weapon fired, although it would be impossible to determine the mode of fire, for obvious reasons.

The fate of the only prototype .22 SMG is unknown. Information about the presence of this sample in museums or private collections is missing. Serial production did not start. Moreover, it is possible that the draft of the new weapon was not offered to potential customers and was closed at the end of the first tests.

In the seventies, Maxwell Atchisson developed the AAS automatic rifle, on the basis of which the AA-12 product was later created. Thanks to these weapons Atchisson gained fame among the general public. However, this was not the only development of the constructor. According to reports, over the years the gunsmith received two and a half dozen patents for certain inventions and innovations in the field of small arms and small-caliber artillery systems. Thus, the two variants of submachine guns remaining at the development and verification stage could contribute to the emergence of new projects and therefore deserve to take their place in the history of small arms.