January 26 2016
31
I offer you, dear readers, some pictures of everyday life sewing factories in our country during the Great Patriotic War. According to them, these pictures, one can clearly see the complete commitment of those who worked on sewing clothes for the soldiers.


Sarapul Garment Factory (Udmurt Autonomous Soviet Socialist Republic)
In the first ten days of the war alone, has labor productivity more than doubled here. Now the increased daily rates were no longer issued by individuals, but by entire brigades and even workshops. Here is an excerpt from the newspaper of the time “Red Kama Region”: “... Worker of workshop No. XXUMX Meshcheryakova said at the nearly thousandth rally:“ I led two sons to the front to fight for the Motherland. I punished them: “Beat the enemy mercilessly!” And here, in production, I will also beat the enemy with Stakhanov's work. I previously fulfilled the norm of not less than one hundred and twenty percent, now I will give at least one hundred and fifty percent of the norm daily ... "

After work, women rushed to nursing courses. And twenty-three factory workers studied to become air defense and chemical defense instructors. In addition, electricians, drivers, and mechanics went to the front. All these professions have been mastered by women, and in record time, therefore the production did not fail for a day (this can be said about all the factories that will be discussed here).

But there were still huge problems with electricity. Therefore, the factory asked the plant number XXUMX in order to get a temporary use of diesel. He gave out electricity within fifty kilowatts, and the factory worked in two shifts, for twelve hours each, and only sometimes - ten. Therefore, the diesel worked almost all day and night.

Another serious problem was the interruption of fittings and spare parts for sewing machines, since the factory has not received anything since the beginning of the war. But here we found a way out. Buttons began to make of aluminum waste, which asked the plant number XXUMX. Think about it: more than six million buttons were made from this waste! Likewise, they coped with the manufacture of hooks, loops, and even some parts for sewing machines.

The factory sewed literally everything that our soldiers needed: from overcoats to underwear and covers for flasks. Moreover, enterprising women made slippers, handkerchiefs and even children's shirts from production waste and packing tissue.

The workers contributed a rather large amount to the country's Defense Fund. To do this, starting from the beginning of August 1941 and until the end of the war, they worked on the collective farm several days a month.

The factory also had its own subsidiary farm: 52 with half a hectare of sown area and 12 hectares of grassland. The great harvest of vegetables, oats, and peas was received by women victims, but they did not take anything for themselves. The main part was transferred to the canteen of the enterprise and about forty percent to the kindergarten. Often gave out food and families in dire need of nutrition.

And another fact: during the "rest" from the change of women rushed to the hospital. They set up a duty here and helped the local medical staff. 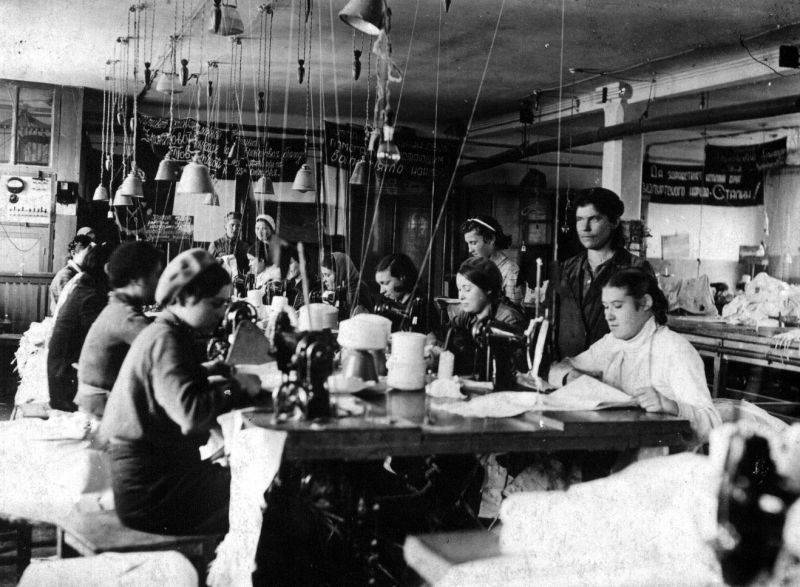 Syzran garment factory (Saratov region)
Until the summer of 1942, this factory was a sewing factory. By the beginning of World War II, nearly six hundred people worked here. And by the autumn 1941 of the year - less than three hundred. But despite this, the factory overfulfilled the plan by 30 percent in the first two years of the war. Moreover, in the autumn of 1942, the workers took up a new business for them - sewing overcoats. They mastered it in just ten days and in the last two months of this year they released almost fifty one thousand overcoats.

Desperately not enough machines for cutting fabrics. It was necessary to fold fifteen layers of matter, then cut manually. Machines could not cope, and the hands were kept ...

Not enough and raw materials. To avoid downtime, women additionally sewed from what was, bloomers and gymnasts. The company employed women workers with young children, to the homes to which the funerals came. These families harvested and brought firewood. Especially for them, only in 1943 a year they sewed about a hundred pairs of children's shoes (although the factory itself was not a shoe, but we also learned this).

Only in 1945, the plan failed. But this was due to the fact that there was a new, improved cloth for overcoats. Now tailoring required more time allotted for the plan. In addition, just before the Victory, the factory received a conveyor, which had long dreamed of. True, to install it, it was necessary to remove the stone wall connecting the two sewing shops, move the furnaces and rebuild several entrances. Who did this? Also women. That is why their labor productivity decreased in that year. However, the verb "decreased" can be safely put in quotes ...

Tyumen garment factory
Before the Great Patriotic War, gymnasts and wide trousers were sewed here for military schools of Tyumen. But already at the beginning of July 1941, cartridge belts, shoulder straps, buttonholes, covers for flasks, and underwear were added to these products. Productivity increased to 170 percent per year. A custom was introduced at the factory: one day a week was declared “family” (family day Ivanov, Petrov and so on). It was about women workers with young children who received a death notice or a notice of missing her husband. On this day, everyone who could, brought gifts (they considered everything as good - from cereals and vegetables to sugar). And after the end of the working day, specially appointed attendants went home to the “birthdays”, helped with the housework, worked with the children, and cleaned. Each mother had the right to leave a request for such “her” day, if she saw that her family was in distress. None of the factory workers did not check whether the family really had no food or money. They believed everything to the word and knew that in such a difficult time no one would pretend. Among the "sad birthday boy" was cutter Tatiana Ermolova, at the very beginning of the war received a death note for her husband and two brothers and the rest with four children. The general decision of the assembly of seamstresses to the Yermolovs began to come necessarily once every ten days - without further reminders. So the kids and managed to feed themselves.

Garment factories of Kyrgyzstan
During the war years, not only "their" factories were located here (there were nine of them by June 1941), but also evacuated from the cities of Russia and Ukraine. In addition, at this time they created a sheepskin, pelt and glue factory, hosiery and haberdashery factories. They built a spinning mill and a tannery. In general, by the summer of 1945, there were already twenty factories in Kyrgyzstan, which in four years produced about six million garments and nearly a million pairs of stockings and socks.

We will dwell more on the Mikoyan knitting factory, which in October 1941 moved from Kharkov to Frunze. At the time of the move, the building allocated for accommodation was not completed. However, neither the workers who came from Kharkov (seventy people), nor the local workers were going to wait for the completion of construction. And at the first meeting they decided to work in unfinished premises. The main thing for them was to supply things to the front: sweatshirts, T-shirts, T-shirts, underwear. Moreover, construction was barely completed in the shortest possible time, as workers (mostly women were) began to produce knitwear, stockings, and socks. And by the end of 1942, these products already had more than forty items, and from year to year the volume of products increased.

And one should not forget that not all women initially worked at a garment factory. In the first days of the war, several thousand former housewives came to work here, who had no specialty or experience. We studied on the move, and the percentage of marriage was almost zero.

Vologda factory "1 May"
The women working here worked, as a rule, in two shifts in a row. First sewed gymnastics, padded jackets, pants, jackets. And in the second they were engaged in repairing clothes. She was specially sent from the front in huge batches. And we are not talking about small cuts or holes - the fighters coped with this themselves, on the ground. No, they sent things to the factory that literally had to give a second life. During the war years, the workers repaired about thirty thousand pieces of clothing! There is a known case when the sewing team (the oldest in it was Tatyana Anatolievna Shvetsova) did not leave the workshops for more than three days. We slept in turn for an hour and a half. Only two members of the brigade were sent home: they had small children.

In his spare time (even the phrase itself sounds strange, but, nevertheless) went to the forest to collect spruce and pine needles. Delivered it to the pharmaceutical items for the manufacture of medicinal tinctures. In the summer, they collected chamomile, St. John's wort, coltsfoot, plantain. Again, not for myself - for pharmacies and hospitals. It seems that the reflexive pronoun "me" was very rarely used in the war years ...

Ctrl Enter
Noticed oshЫbku Highlight text and press. Ctrl + Enter
We are
Women who defeated fascismWhite emigration. Foreign higher military-scientific courses under the guidance of Professor Lieutenant-General N.N. Golovina
31 comment
Information
Dear reader, to leave comments on the publication, you must to register.