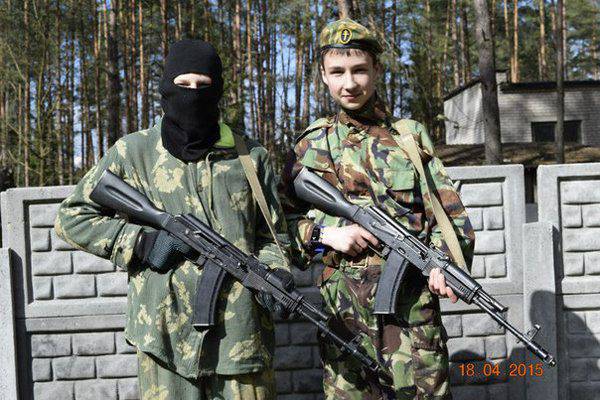 What is written here, in principle, can be attributed to any country of the former USSR. The whole question is how far the processes of the formation of patriotic forces will go and what will they eventually lead to. There is no need to go far for an example, an example is near. And with Russia, and with Belarus.

There is such a patriotic union in Belarus, the Young Front. The union is frankly nationalistic. The Front has its combat wing, the Vayar detachment. “Vayar” is supposed to be considered as the official military-patriotic club, respectively, its activities do not cause complaints and suspicions among the authorities.

But let's turn our attention to some (pretty fresh) photographic materials. Here is a photo (on the right) from the reconstruction site. These guys are reconstructing the Waffen-SS 30 Belarusian division, which is understandable by their form. There is nothing reprehensible in this, if you do not drive much on the topic. Reconstruction - the thing is that without the Germans in any way. With someone must fight the soldiers and officers of the Red Army in productions, it is logical? So no complaints.

But the left picture from the training base of the already mentioned "Vayar". Taken from their group in contact. We draw attention to the menswear's naruvavny chevronchik. And we compare it with the reconstruction. How is it? So I do not really like it.

But we go further. And what is this little man in the background, so even with a bared face? Does it seem to me, or is his chevron hinting at some neighboring state? A scarf so familiar, black and red and with a golden trident, I also saw someone. And why does this scarf evoke memories of the “Right Sector”?

Strange alignment. And then the question arises, “against whom to be friends,” will this campaigner agitate with such familiar symbolism? The question is clearly rhetorical.

But in the following photos it becomes quite sad. 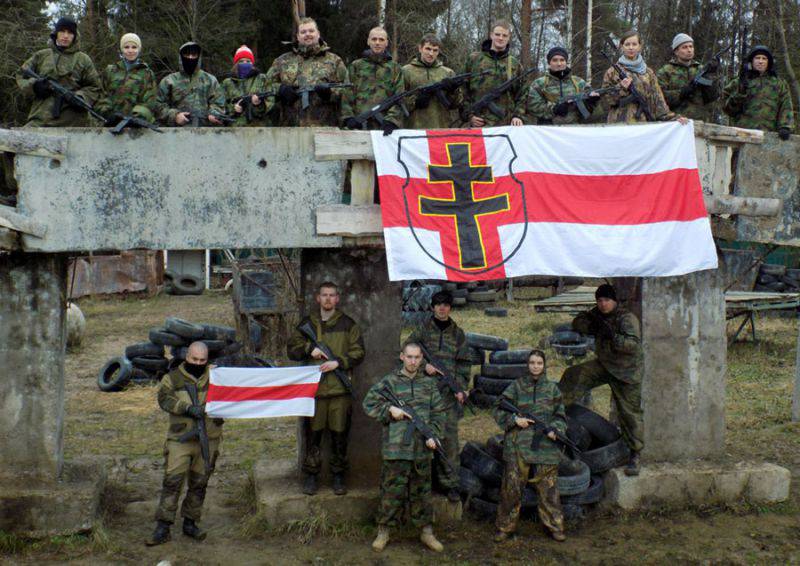 This photo is again “Vayar”, from some training ground. The point is not in the ground, the essence of the flags, which demonstrate quite openly. And these photos are normally so hang on the pages of the participants. 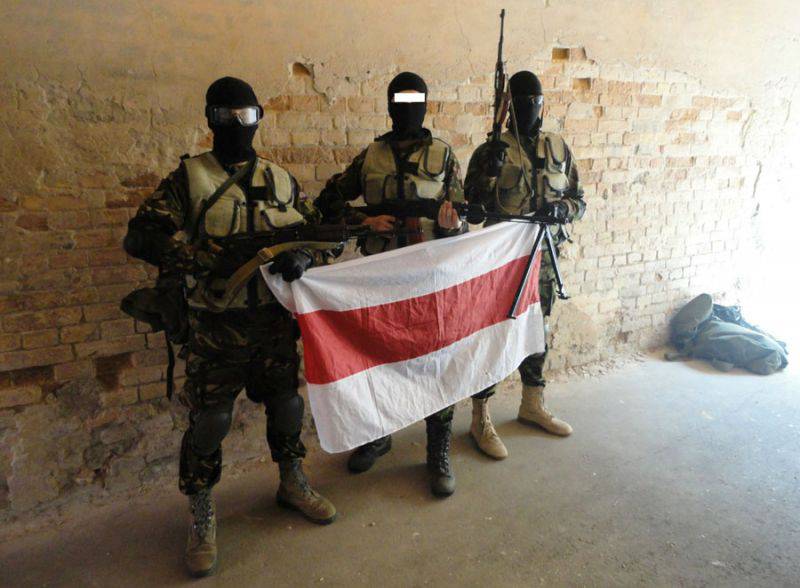 And this is the Donbass. And the machines are not airsoft, but quite real. They are members of the Belarusian "Volunteer Tactical Group", which, I note, exists within the framework of the Ukrainian Volunteer Corps (ALC). We know very well what kind of formation this is. 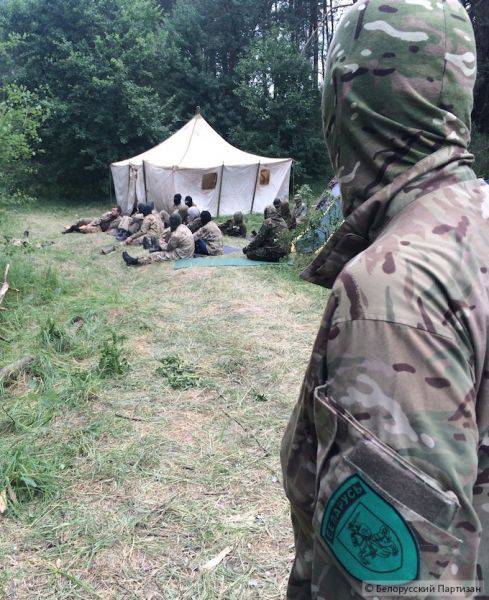 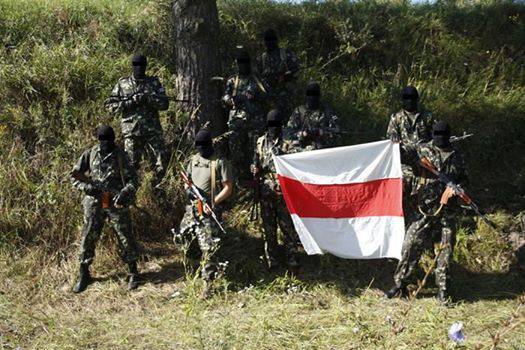 By the way, are we seeing such a blue chevron? Yeah. So, this is a field version of yet another Belarusian patriotic association - “Pagonya”. Here it is in color, on the left. 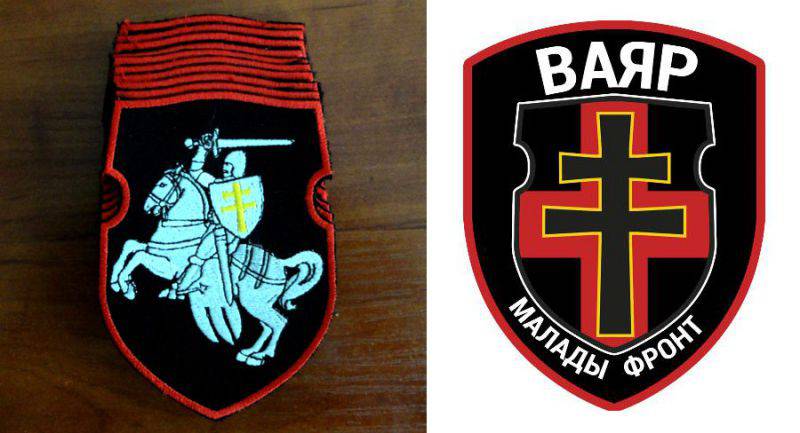 This volunteer detachment is quite openly preparing all those who wish and sending it to the Donbass. To fight as part of DUK. These are the layouts.

It should also be noted that in the Criminal Code of the Republic of Belarus there is one aspect. A person taking part in conflicts on the territory of other countries as part of official units is not considered a mercenary. And the law has no complaints against him. What not to say about those who participate in informal organizations. The type of units of the DNI and LC. Here those just fall under the article on mercenarism.

But the article was written long before the events in the Donbass, and hardly anyone could have imagined then that frankly pro-fascist and nationalist structures would become official structures. But ... the law does not imply any other interpretation.

However, for some reason, the Belarusian volunteers on the side of the ALM prefer individuals not to advertise.

Let's go back to Belarus. And just a couple of photos on this topic. 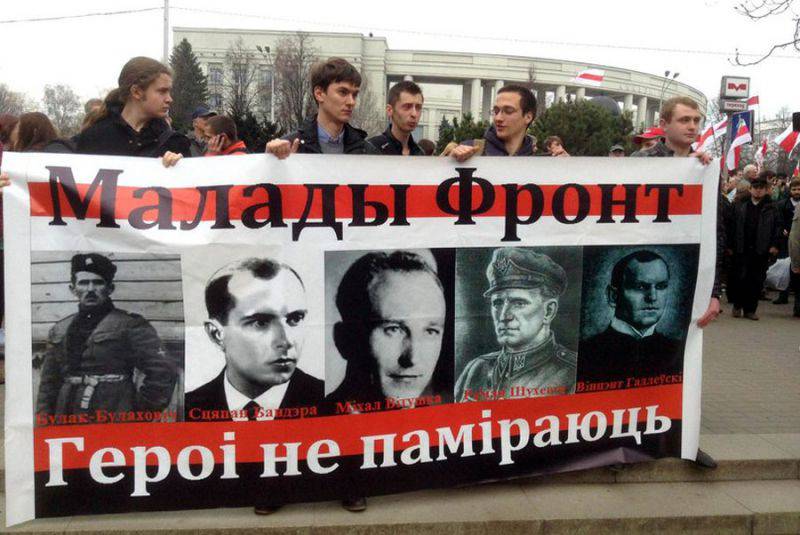 This is Minsk. This procession "Young Front". Bah, familiar all faces! Bandera, Shushkevich, Bulak-Bulakhovich ... And a couple of scum local bottling. I don’t know who Vincent Galleis is, and to be honest with me, to be honest, but I’ve heard about Mikhail Vitushka. The main policeman in the territory of occupied Belarus, the "father" of mobile units of the occupying auxiliary police.

People interested say that Vitushka died in Germany, where he fled after the war, in 2006, as well. People from the other side of the village prefer the version of the death of Vitushka 7 in January 1945 in a battle with a detachment of the NKVD near the village of Rudniki. I like the second one more.

However, a worthy person in the row. And the handicraft making of a banner is striking by no means.

Many Belarusians claim that, say, these nationalists are an exclusively metropolitan phenomenon. "Golden Youth", which goes crazy to the best of its depravity. Everything would be fine if it were really true. From my friend from Odessa, my former neighbor, in 2013, I also heard rather scornful statements towards the Maidan. “They will leave us, they are violet on us, we have something to do here in Odessa.” And it turned out like ... 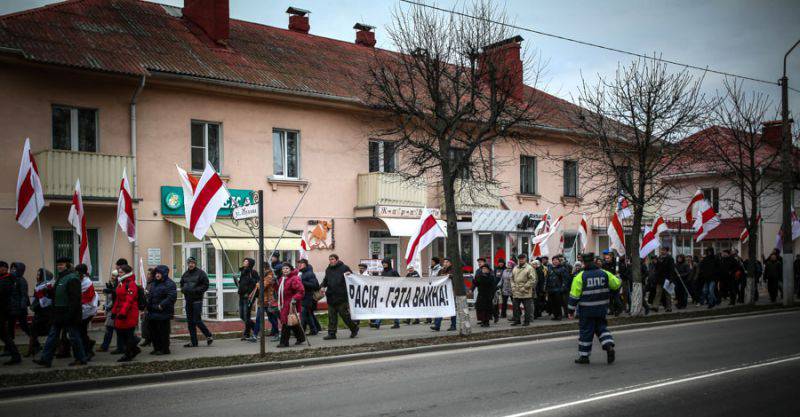 But here, please, a demonstration in a small town Lutsk. The same flags. Well, the inscription on the banner can not translate. If you search, I am sure that you can find photos of such processions in cities other than Minsk and Lutsk.

The fact that anti-Russian and overtly nationalist movements openly show themselves in Belarus is somewhat unpleasant. If only because it is obvious that the Ukrainian lessons for the future did not go. And the authorities should have thought about their tolerance towards nationalists. Yes, rehearsals Maidan in the republic have already been. And they ended for the organizers pitiably, that is, very polite, but overclocking. However, some powder in the old dog is ...

Now about things more pleasant for the Russian eyes. It would be absolutely unfair to expose Belarus as a sort of hangout for the nationalists of the fascist warehouse. Moreover, my opinion is still inclined to believe that Belarusian nationalists really do not have such a critical mass. That is, the total explosion will not lead. But the fact that more than once try, do not go to the fortuneteller.

And in order to better know those who oppose them, I turned specifically to nationalist sites. Where the "patriots" are trying in every way to spit on their opponents.

No, the nationalists work beautifully. With taste and fiercely. 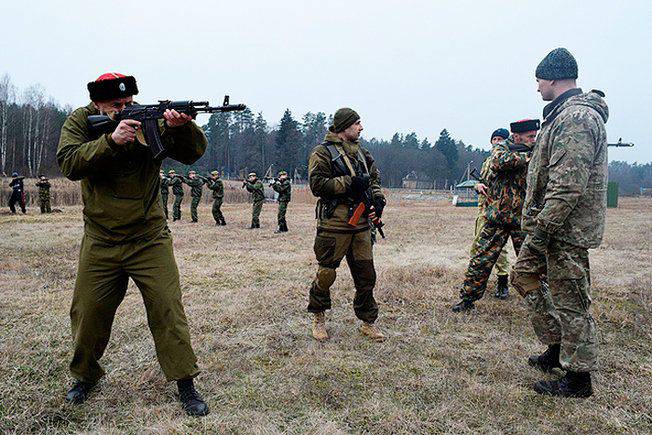 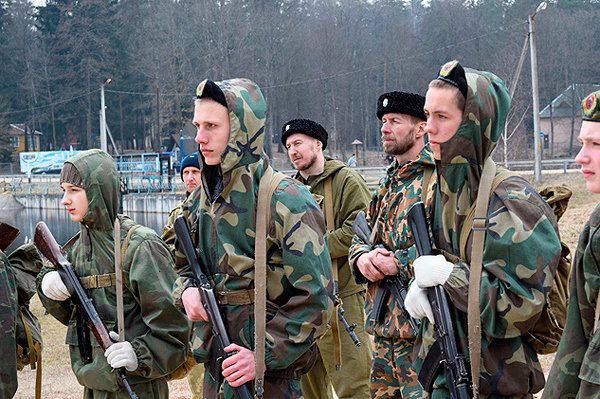 Here are the training of the military-patriotic club "Cossack Savior". Nationalists water the Cossacks from the heart. And there were no Cossacks on the territory of Belarus (well, well, at Khmelnytsky was a bit), and they look at Russia, and the pages in social networks are full of Russian and imperial flags ... And I don’t understand what children are taught. It is clear that according to the nationalists, nothing good.

But pay attention, nobody hides faces. And their names are known. The first photo of Peter Zubatsky, Peter Shapko, Sergey Zubatsky. To the right is Militia Lieutenant Denis Mishkel (we should especially be talking about him). Behind Sergey Zubatsky - the militia major Pavel Naida.

Opponents are embarrassed that the police, instead of planting these pro-Russian Cossacks where they need to, stand in a row with them. It is very embarrassing.

In the second photo on some guys black berets. Not for nothing. In order to get the right to wear such a beret, you need to pass the regulations. Yes, not simple. To get a “black beret”, a graduate of the club must pass tests like a simplified putting on “krapovy”: run 10 kilometers in full calculation, go through an obstacle course and defend three rounds in hand-to-hand combat with an instructor.

There is, by the way, some profit from this deal, besides the black beret. Their owners free parachute jumps at the base of the Grodno Aeroclub.

We, in turn, have already written about such practices in Russia, when 16-17-year-olds in military-sports clubs seriously threaten these norms. And many successfully pass. Belarusians are no worse. 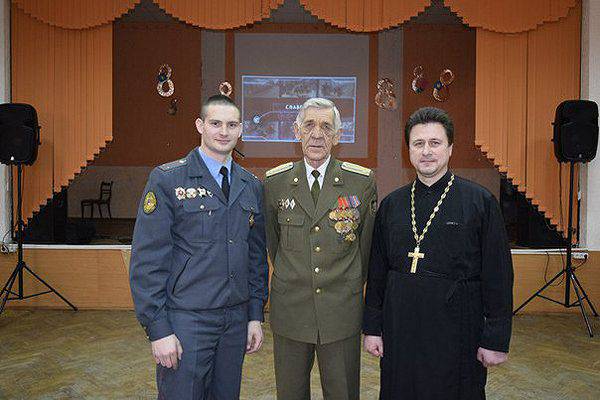 And here is another photo with two very remarkable people. On the left is police lieutenant Mishkel, who has already met in one of the previous photos, on the right is Archpriest Yevgeny Pavelchuk. What could unite the representative of the power structure and the minister of the church?

These are, dear readers, creators of the clubs “Slavs” and “Druzhina” in the Grodno region.

In general, this shepherd must be said separately. With great pleasure I will tell you. He served this worthy shepherd in Shchukin. And there, together with Mishkel, he founded the club "Druzhina". Pavelchuk was transferred to serve in Grodno. What do you think calmed down? Yeah ... So the club "Slavs" appeared.

This is what I call a service. Man serves not only God, but also the Fatherland. In this way.

In general, the Grodno diocese is something! For an ordinary Russian who is used to the fact that our church has a slightly different policy, this is a shock. Priests create military-patriotic Orthodox clubs! Learn Russian! And in the Grodno region there are five such Orthodox clubs. The total number of participants is more than two hundred people. Few? Rivers with streams begin. A hundred people is, if my memory serves me, already a company.

In addition to Grodno, Orthodox military-patriotic clubs are organized by dioceses in Vitebsk, Minsk, Brest, Turov, Berezino, Mogilev, Gomel, Polotsk, Bobruisk. A total of fourteen. What is very, very saddens some part of the Belarusian public. To hysterics right sad.

There is such a journalist, Artem Gorbatsevich, so if you read him, the “fifth column”, which is ready to serve Russia, is trained in these clubs. Well, what can I say ... everyone has his own. Someone at Bandera with Shushkevich places it on the page, but for some reason this doesn’t bother Gorbatsevich. 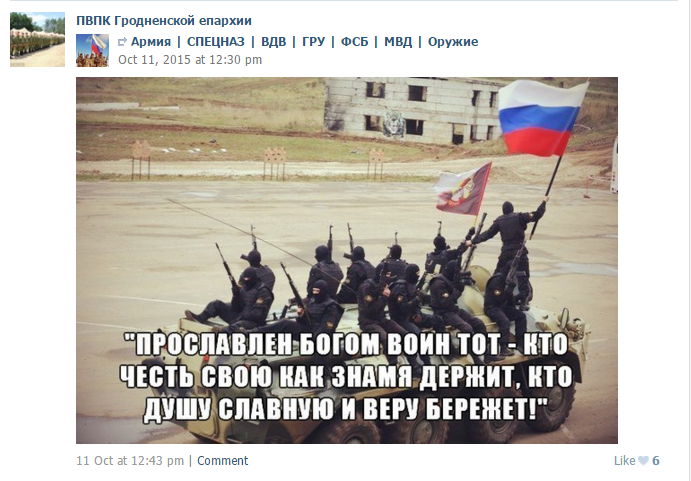 But for some reason, this colic begins. I pulled it out of his little article. With such a comment to the screen: "The administrators of the association" Orthodox military-patriotic clubs of the Grodno diocese "VKontakte are not shy to spread Russian flags on the cell wall."

Why not? Do not spread the white-red cloth of the Belarusian traitors-policemen.

And I, as a Russian, are much nicer to see these, not hidden by balaclava and retouching, faces. 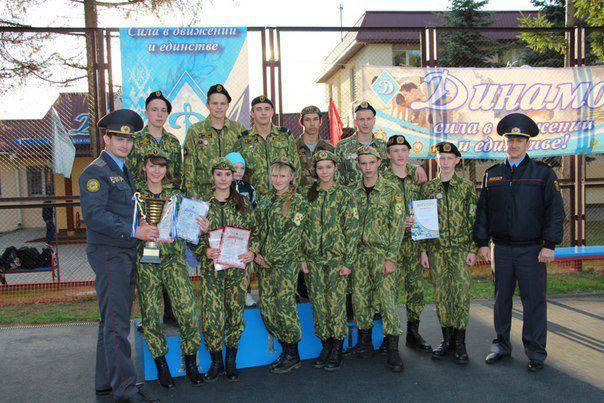 And in conclusion, I just want to wish success to all who stand today in Belarus against the admirers of Bandera, Shushkevich and other executioners of the Russian, Belarusian and Ukrainian peoples.

Ctrl Enter
Noticed oshЫbku Highlight text and press. Ctrl + Enter
We are
Results of the week. “In our cooperative, the board is always agreed”Memo to mercenaries in Africa
115 comments
Information
Dear reader, to leave comments on the publication, you must to register.