How was Nord Stream sentenced - 2?

January 25 2016
152
One of the “significant” figures at the World Economic Forum in Davos (in Switzerland) was predictably made by the Ukrainian president, Petro Poroshenko. The foreign, Ukrainian and Russian press is replete with his numerous statements. He will receive billions from the IMF, and will jointly override the Nord Stream - 2 Russian with the West, and will receive "full US support for full implementation." 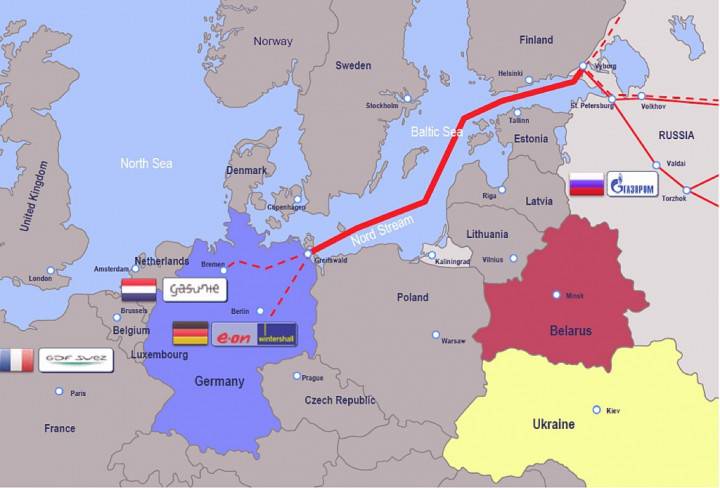 Petro Poroshenko held talks in Davos with US Vice President Joseph Biden. The President of Ukraine, sensing the presence of the almighty Mr. Biden, said that the “Nord Stream - 2” project should be “stopped”.

After talking with Biden, Mr. Poroshenko said that Washington and Kiev would interfere with the implementation of the Nord Stream - 2 project, which envisages the construction of two gas pipelines from Russia to Germany.

"We clearly emphasized that" Nord Stream - 2 "is a purely political project that is directed against both Ukraine and a significant number of EU countries, and we must act effectively to stop it," Poroshenko quotes Utro.ru.

Not without social networks.

“In the case of rozmі @ @VP, it was more difficult to do it, the project“ The Great Pot - 2 ”є is very political, and most effective for everyone,” he said.

Translation by RIA News": "In a conversation with @VP (Joseph Biden's account. - Ed.), It was clearly noted that the Nord Stream - 2 project is purely political, and we must act effectively to stop it."

Such confidence Poroshenko in the "stop" of the project did not arise from scratch.

At the end of November 2015, the magazine reminds "Expert", ten states of Central and Eastern Europe wrote a letter to the European Commission. The text expressed the opinion that the “Nord Stream - 2” did not correspond to the interests of the European Union. Moreover, this project allegedly undermines the position of Ukraine.

Ukraine itself did not keep silent. Prime Minister Yatsenyuk called the project anti-Ukrainian and anti-European, since his goal was to deprive Ukraine of transit capacities and about two billion dollars in annual gas transit fees.

In addition to agreeing with Joe Biden about the "Nord Stream - 2", Petro Poroshenko was also happy with the upcoming cash tranche from the IMF. Tranche rather big - seven billion dollars.

As transmits "BBC"Kiev expects the next tranche of financial assistance from the IMF in February. Petro Poroshenko said this when giving an interview to the Bloomberg TV channel in Davos.

Later, in an interview with CNN, Poroshenko clarified that Ukraine expects to receive $ 7 billion from the IMF.

A year ago, reminds the BBC, the IMF agreed to grant Ukraine a loan of $ 17,5 billion in the framework of the program of economic reforms. The first tranche was sent to Ukraine in March 2015 and amounted, according to A. Yatsenyuk, to about 5 billion dollars. The second tranche, for 1,7 billion dollars, was received by the state in August. The third tranche was expected to be received in December 2015, but the matter is stalled.

And now, in Davos, Poroshenko talked with the head of the IMF Christine Lagarde and discussed the provision of international financial assistance to Ukraine. According to "BBC", the result of the meeting and Lagarde and Poroshenko were satisfied.

At the talks with Joe Biden, which lasted as much as four hours, Poroshenko finally believed in the power of the “implementation of the Minsk process” and “constitutional changes”.

“We have come to an absolutely single conclusion that there is no alternative to the Minsk process,” he quotes. Utro.ru. “We have full US support for the full implementation of the Minsk process, which includes the security component.”

According to the Ukrainian president, during the meeting the parties (that is, Biden and Poroshenko. - O. Ch.) Coordinated actions regarding the ceasefire regime in the Donbas. In addition, the issues of “unhindered access of OSCE representatives to heavy storage facilities weapons and to the border. "

“Separately, we discussed the“ roadmap ”of constitutional amendments,” Poroshenko said.

Finally, the preparation of elections in the Donbas was also discussed “in accordance with Ukrainian legislation, with the broad participation of international observers,” the Ukrainian president added.

In short, wherever you throw, everywhere ... USA. Well, or the IMF, which, in general, also belongs to the world "patrimonies" of the United States.

It turns out that Washington will rewrite the constitution of Ukraine (or Ukraine will write it under Washington’s dictation), help Kiev to achieve “full implementation of the Minsk process”, kick the negligent IMF who delayed the December tranche and rally the European-Ukrainian 2 opponents, with whose help these nasty Russians conceived to infringe on the interests of Ukraine.

Decided: "Nord Stream - 2" - the project is not an economic, but a political one, and its goal is to harm both unfortunate Ukraine and the "significant number" of EU countries.

Well, we will wait for Joe Biden's visit (or perhaps the specialist for cutting off the “flows” of John McCain) to Germany somewhere, since the “Nord Stream - 2” is sent there. Let's see how the representatives of Washington will provide "full support" to Ukraine and defend its "interests".

Observed and commented on Oleg Chuvakin
- especially for topwar.ru
Ctrl Enter
Noticed oshЫbku Highlight text and press. Ctrl + Enter
We are
Results of the week. “As Comrade Lenin commanded - to work, work and work - and then there will be many, many money!”Situational analysis of the death of the MH17 flight (Malaysian Boeing 777), made on the basis of engineering analysis from 15.08.2014
152 comments
Information
Dear reader, to leave comments on the publication, you must to register.