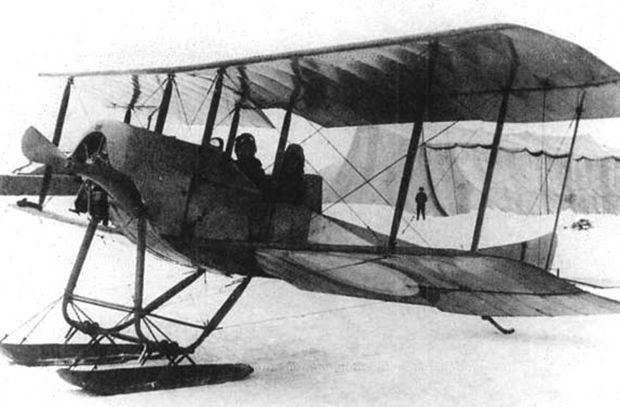 January 22 1915 built the first Russian C-16 fighter Igor Sikorsky
In the autumn of 1914, the young, but already experienced aircraft designer, 25-year-old Igor Ivanovich Sikorsky, the creator of the famous Ilya Muromets bomber, was working on a new air vehicle. The works were carried out in St. Petersburg in the workshops of the Aeronautical Department of the Joint-Stock Company “Russian-Baltic Carriage Plant”. It was this plant that became the first Russian manufacturer of domestic cars, seaplanes and heavy bombers. Igor Sikorsky from 1912, was the chief designer of the Aeronautical (Aviation) department of the plant.

From school to fighter

The new Sikorsky unit, which received the name C-16 (“C” - from the designer’s name), was originally conceived as a training machine for the pilots of “Ilya Muromets”. That is why, instead of the usual control stick for small airplanes, in the future C-16 was installed a control typical of heavy airplanes - a cast aluminum steering wheel and brass foot pedals.

Together with Sikorsky, his closest associates and assistants, a lieutenant of the Imperial Russian Navy, worked on the new aircraft. Fleet Georgy Lavrov and the old associate of Sikorsky still in the Kiev Society of Aeronautics Anatoly Serebrennikov. As the world war deepened, the aircraft, originally conceived as a training aircraft, it was decided to do as a fighter, to cover from the enemy aviation the squadron of heavy bombers "Ilya Muromets" both in the air and during basing at airfields.

Since the plane C-16 was the first in our stories fighter domestic design. The project was ready in October 1914 of the year, since November, the construction of three prototypes began. The first of these, under the factory number 154, was ready on January 22 of the next 1915.

The plane was a typical single-engine biplane of the classical scheme with an engine in front and an open two-seat cabin. In addition to the steering wheel and pedals, the left and right of the pilot housed the motor control - a crane for gasoline, a gas handle, an indicator of the engine speed and a hand pump for pumping gasoline from the lower reserve tank to the main one.

The plane was created double, so that it can be used as a scout. The observer was located behind the pilot, his seat was mounted directly above the lower gas tank.

The C-16 crew used two machine guns as weapons. Stationary fastened on the left side of the fuselage. Initially, for these purposes it was supposed to use a lightweight version of the Maxim machine gun of Russian production. But the machine gun was badly lacking in a land army, and for arming the C-16 used imported machine guns - first the British "Vikkers" (the English version of the easel "Maxim"), and then the American "Colt". The cartridge drum was placed at the feet of the pilot.

The first domestic fighter with a "synchronizer" 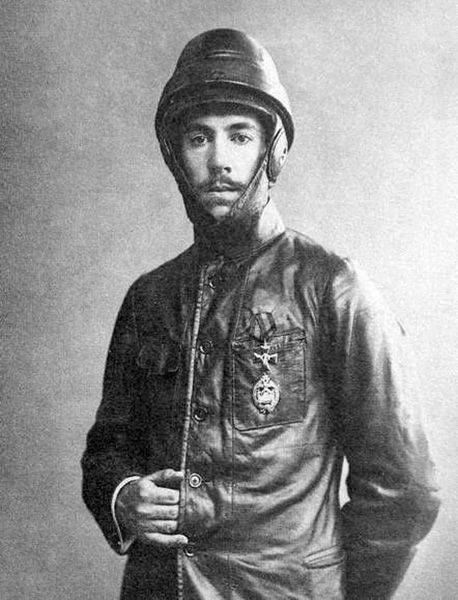 Igor Sikorsky. Photo: Carla Bulla. 1914 year. wikipedia.org
Since the shooting was carried out in the plane of rotation of the propeller, the aircraft required a special device - a “synchronizer”, which links the machine gun with the aircraft's engine to regulate the shots so that the bullets do not fall into the propeller blade. That C-16 was the first domestic aircraft and one of the first in the world, which was equipped with a machine-gun "synchronizer".

Previously, fighters had to install special “cut-offs” made of steel or armor on the rear surface of the propellers in order to protect the propeller from the bullets of their own machine gun. Such a design reduced the useful power of the propeller and sent nearly a third of the machine-gun bullets past the target when firing.

Created by Russian lieutenant G. I. Lavrov in 1915, the “synchronizer” made it possible to avoid these problems. The trigger mechanism of the machine gun through the system of levers and discs was connected to the shaft of the oil pump of the motor. The pump was driven by gears from a rotating engine — in this way, the engine speed and, accordingly, the propeller were synchronized with a machine gun, which could fire only when the propeller blade did not overlap its barrel. For that time, the “synchronizer” of machine-gun fire became a revolutionary invention, allowing a serious increase in the speed and firepower of the fighter.

The design of the C-16 provided for the possibility of firing from a stationary machine gun mounted on the fuselage by both the pilot and the observer behind him. In this case, the observer was armed with another, this time with a machine gun. For this purpose, they used either the Danish machine gun Madsen or the English Lewis. From 1917, it was supposed to use the new Russian automatic machine designed by Vladimir Fedorov to equip the observer C-16.

Although the first model of the C-16 fighter was ready at the very beginning of 1915, its mass production was delayed due to a shortage of engines. Originally it was supposed to equip the aircraft with engines of domestic production of the Kalep system (designed by the Latvian Fedor Kalep) produced at the Riga Motor plant.

But due to the onset of the Germans, the plant was evacuated to Moscow - at that time it was the only production of aircraft engines in Russia - and until the end of the war our country experienced an acute shortage. Only in 1917, the evacuated plant managed to start producing five motors per day, which somewhat reduced their shortage, but did not completely eliminate the deficit. By the way, this production exists and is successfully operating in our time: now it is the “Scientific and Production Center for the Gas-Turbine Construction Salyut”, one of the largest enterprises of the Russian Federation in the production of aircraft engines.

But back a century ago, in the 1915 year. C-16 fighters had to be produced with imported heavier and less powerful French-made Gnome-Rhone engines. Nevertheless, even with these engines, the new Sikorsky aircraft was easy to fly and had excellent flight characteristics for its time — when flying in a lightweight version with one pilot, it reached 144 km / h. And at full load in 225 kg the speed reached 125,5 km / h. To a height of 1, the kilometer C-16 climbed in just 4 minutes. 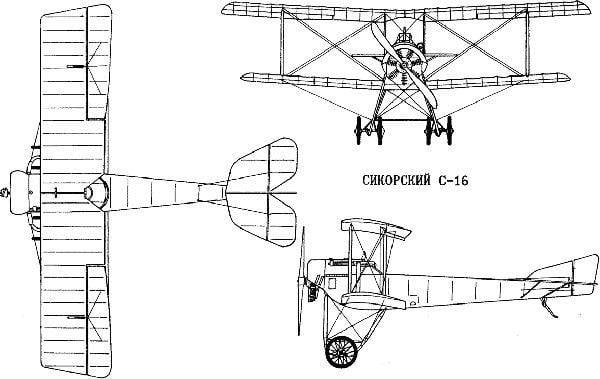 Fighter C-16. Figure: pretich.ru
Shortage of engines seriously delayed the production of the new aircraft. The first contract for 18 copies of the C-16 and the same sets of spare parts was issued only on October 24 of the year 1915. The kit of spare parts included, in fact, all the main parts of the aircraft, so the Tsar Treasury paid 16 rubles for each C-9500 fighter, and for each set of spare parts, 4500 rubles. By the way, the “synchronizer” for the machine gun cost quite a considerable amount - exactly 1000 rubles.

During production, we faced not only a shortage of engines, but also a breakdown in the supply of components (steel and brass pipes, sheet steel, wheels, bolts, etc.), many of which were delivered from abroad, mainly from Sweden. In this regard, Sikorsky and his assistants had to urgently redesign some parts and even start producing their own steel pipes. Because of the changes, the weight of the C-16 production aircraft turned out to be different, from 416 to 423 kg.

In the military, these aircraft nicknamed "Sikorsky-small" (in contrast to its large four-engine bomber "Ilya of Murom"). If originally C-16 was planned to be used as training vehicles, as well as “scouts at scheduled raids on certain points”, by the end of 1915, the order ordered them to be used as “fighters at combat bases to protect aircrafts against raids of the enemy air fleet ".

In March 1916, the first six C-16 arrived at the front. The combat debut of this aircraft took place on the territory of Galicia in the 7 squadron - the first special fighter squad created in early April 1916. 15 of April of that year at four o'clock in the afternoon, Second Lieutenant Ivan Alexandrovich Orlov and his “Letnab” (observer pilot) cornet Lipsky on С-16 №204 first rose in the area of ​​the town of Yablonov (now a village in Ivano-Frankivsk region of Ukriana) to intercept enemy airplanes. The plane successfully drove the enemy vehicles from its airfield.

Already 27 April 1916, the C-16 fighter won its first victory. On this day, the crew, piloted by Kornet Yuri Vladimirovich Gilscher, was shot down by an Austrian reconnaissance aircraft "Aviatic" from a machine gun.

Successful flights to C-16 continued and Ivan Orlov. 28 April 1916, he shot down his first enemy aircraft, killing an observer and injuring the pilot. Exactly one month later, on May 26 of the year 1916, he scored a second aerial victory, shooting down a double Germanic Albatross fighter.

The fate of the first fighter after the revolution

In February, Sikorsky 1917 completed the assembly of the second batch of X-NUMX C-15 aircraft, but because of delays in the supply of engines to the front of the First World War, they did not hit. In the 16 year, when Sikorsky himself emigrated forever from Russia, six of his C-1918 fighters remaining on the German front went to the Austro-German troops that had entered Ukraine.

In April of that year, the Germans handed over these trophies to the troops of Hetman Skoropadsky. In 1919, they went to the advancing Red Army, but some of the pilots soon flew to General Denikin. Due to the deterioration of the engines, in the future whites only one C-16 would fly, which would get into the 1 Kuban Cossack aviation squad. In 1920, this aircraft was relocated to the Crimea, and after the departure of General Wrangel's troops from there, he again went to the Red and was used for some time at the aviation school of Sevastopol.

The second batch of C-16, assembled in Petrograd and never reached the German front due to the lack of engines, went to the Soviet government. Two of these aircraft in the 1919 year, entered the Moscow School of Aviation and another five in the Division of aircraft in the city of Sarapul. This division, which consisted mainly of the Ilya Muromets bombers, fought on the Wrangel front and against the Poles of Pilsudski.

In the Moscow School of Aviation, C-16 aircraft were used up to 1923. It was then that the future teachers of Chkalov and other famous Soviet pilots 30-40 of the last century were flying.

Ctrl Enter
Noticed oshЫbku Highlight text and press. Ctrl + Enter
We are
23 December 1914 in Russia created a squadron of aircrafts "Ilya Muromets"An-12 in Afghanistan
18 comments
Information
Dear reader, to leave comments on the publication, you must to register.