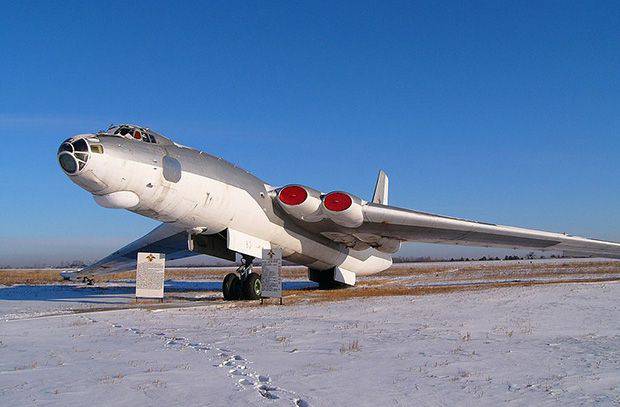 January 20 1953 for the first time the Soviet competitor of the American B-52 rose to the sky, who went into service several months earlier than his rival
The atomic bombings of Hiroshima and Nagasaki heralded the beginning of an era of nuclear weapons. But it was not enough to invent and manufacture a bomb — it had to be delivered to the site of the bombing. And it is precisely with this that the opponents of the new, "cold" war have problems. Both in the USSR and in the USA there were enough modern bombers capable of delivering powerful blows - but there were not those who would reach the enemy, remaining invulnerable on their territory. This required aircraft that can quickly cross the ocean. And it was necessary to create them from scratch.

The first to develop such winged cars took the Americans. And no wonder: they already possessed an atomic bomb, and besides, they had a wealth of experience in creating long-range bombers for war in Europe. The contract for the development and construction of a strategic jet bomber capable of delivering nuclear weapons to the territory of the Soviet Union was received by Boeing in June 1946 of the year, winning a design competition.

In the USSR, it was only in August that 1949 of the year undermined the first atomic bomb of its own, and therefore it was only after that that they seriously began to work on the creation of its delivery systems. In addition, the most urgent needs for them were already met: shortly before the first Soviet atomic explosion, the heavy "strategy" Tu-4, which was almost an exact copy (with the exception of its own radio station, as well as more powerful engines and cannon defensive weapons) of the American B-29.

But the Tu-4 had a range of all 5000 km, which means they had to be placed as close as possible to the enemy - that is, under the threat of a sudden blow, similar to the blows of 22 June 1941 of the year. And the task of creating an aircraft that would be based in the depth of the country, in a safe distance from the enemy, remained relevant - and every month more and more important.

By tradition, the first to solve the problem attracted the chief specialist in Soviet bombers - aircraft designer Andrei Tupolev. But, oddly enough, he refused to be honored, despite the fact that the task was set by Joseph Stalin himself. Tupolev argued his refusal simply: the creation of such an aircraft is currently impossible, since the existing engines will not provide the required range, and the turboprop will not provide the speed and height of flight. And then one of his students, the head of the MAI department Vladimir Myasishchev, took up the business. Despite the fact that his bureau number 482 during the war years did not issue a single serial bomber, and Myasishchev himself was repressed and still not rehabilitated, the designer’s readiness to solve the question and reasoned considerations about this decision in the Kremlin considered it sufficient reason to start work . 24 March 1951 was signed by Government Decree No. 949-469 on the design and construction of a new aircraft. At the same time, the recently closed design bureau No. XXUMX was reconstructed at the Moscow aircraft factory No. XXUMX, which became the production base for the new machine.

Work on the project of the future bomber M-4 began when the design bureau was not even fully formed. But the ideas were clear, people capable of embodying them in metal were already working, and therefore the project was moving fast enough. Already on November 30, 1951 was approved by the mockup protocol, and on May 15, the first prototype was laid.

According to the tasks set by the government, and according to the creators, the aircraft, which before adopting the 25 project index, should have the following characteristics: speed - up to 900-950 km / h, ceiling - 12-13 km, flight range - 12 000 km, high bomb load, the presence of powerful defensive weapons and the ability to perform tasks at any time of the day and in any weather with targeted bombing above the edge of the clouds. In reality, the world's first military strategic bomber M-4 had the following characteristics: maximum speed - 947 km / h, practical ceiling - 11 km, practical range - 8100 km, combat radius - 5600 km. True, in this case, the aircraft had a very solid armament, as required by the technical assignment. Its normal combat load was 9000 kg, and the maximum - as much as 24 tons. This more than met the demands of the military: if the first Soviet atomic bomb weighed 4,6 tons, then the production samples were already on 3,1 tons, so that one M-4 could carry three bombs at once. Plus, powerful weapons for defense against enemy fighters: three double-barreled cannon turrets - at the top, bottom and in the tail, with the top and bottom completely blocking their hemispheres.

The construction of the first prototype took almost six months. In the autumn of 1952, he was disassembled in parts and sent to Zhukovsky at the aerodrome of the Flight Research Institute (LII), where a series of ground tests began. And for the first time, the plane lifted 20 on January 1953, the crew of test pilot Fyodor Opadchiy: along with him six more specialists went on the first flight. 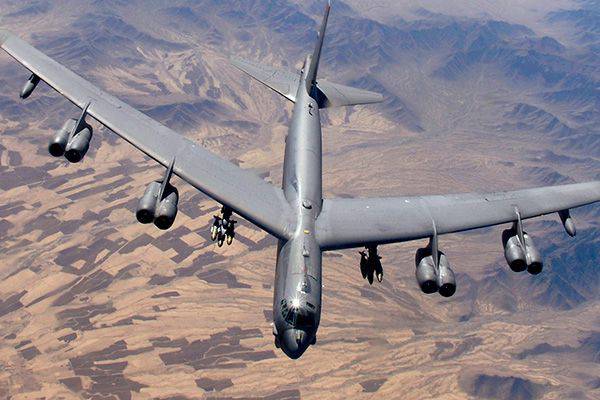 American bomber B-52. Photo: ru.wikipedia.org
And then the race began. By this moment, and in the USSR they knew for sure, the first-born strategic aviation The United States, the B-52 bomber, has already passed the flight test program with might and main. The size of the Soviet nuclear arsenal was clearly inferior to the American, and therefore, there was only one chance to reduce the size of a possible threat from that side of the ocean: to adopt the means of delivery of Soviet atomic bombs. And we managed to cope with it. M-4 - the Myasischevsky plane received such an index when it was put into service - it passed the program of flight and state tests in just two years. Formally, state tests ended only on July 25, 1955 with the signing of the act, which stated that the aircraft was suitable for use in combat units. In fact, the first production M-4 - true, and this index itself was assigned to the aircraft only by the July act - flew from Moscow, where it was assembled, to the airfield in Engels, where it was to serve, already on February 28, 1955. It so happened that the Soviet strategic jet bomber became the first combat aircraft of this type in the world. After all, the American B-52 began to enter service only on June 29, 1955!

In total, the Moscow aircraft factory №23 released 34 aircraft M-4: two experimental and 32 serial. All of them went to the pilots of the specially-designed 4 of September 1954 of the year for the development of these aircraft of the 201 heavy bomber air division, based in the city of Engels. The experience of the pilots of this division, which was far from being easy to earn, later served as the basis for the refinement of the next modification of the M-4 - the famous Myaschishev "strategist" 3M, which remained in service until the middle of the 1990s.

Ctrl Enter
Noticed a mistake Highlight text and press. Ctrl + Enter
We are
Convair B-36 long-range US strategic bomber (part of 1)An-12 in Afghanistan
44 comments
Information
Dear reader, to leave comments on the publication, you must to register.