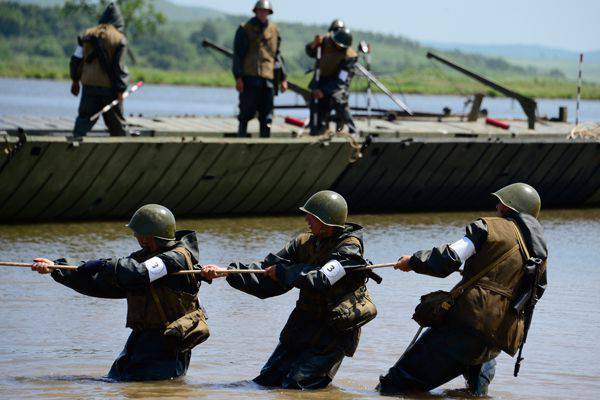 A unique operation was carried out by the engineering troops of the Ministry of Defense. Conducted reconnaissance and demining of the seabed along the route of the future bridge to the Crimea.

Legends are not in vain about military engineers. Today they are able to lay a pontoon ferry several kilometers long in just a few hours. And so strong that it can withstand tank the column. They can drill a powerful well in a matter of hours, capable of providing an army camp anywhere with drinking water. And now in the arsenal of military engineers are being tested high-tech innovations. What high technologies are being mastered in the army, Lieutenant General Yuri Stavitsky, chief of the engineering forces of the Armed Forces of the Russian Federation, told the Rossiyskaya Gazeta.

Yuri Mikhailovich, before starting to build a bridge that would connect Crimea with the rest of Russia, it was necessary to examine the seabed in the Kerch Strait. This task was assigned to the engineering troops. How did your specialists deal with it?

Yuri Stavitsky: Yes, indeed, this task was carried out by a demining detachment of the International Mine Action Center of the Armed Forces of the Russian Federation formed last year.

This center is designed to train foreign specialists to perform tasks for cleaning the area from explosive objects and for work, including outside the Russian Federation.

21 hectare of land surveyed by military engineers in the Kerch Strait, where the bridge to the Crimea peninsula will pass
Specialists of the Center cleaned up the area in the area of ​​construction of the bridge from explosive objects left there since the Great Patriotic War. The task is time consuming and responsible. After all, both safety at the construction stage and traffic safety depend on it. A total of 2015 explosive objects were detected in the transition area in 387 for the year, and a total of 10,000 hectares of land was cleared.

Almost all the operations of military engineers are to a large extent associated with the risk to life. Are you going to replace your subordinates with robots in dangerous areas of work? And is it possible?

Yuri Stavitsky: Engineering troops regularly receive the latest robotic systems. Thus, in the framework of the Dolomit development work, a multifunctional robotic demining complex Uran-6 was developed. It is able to clear land from anti-personnel mines and explosive items with an explosive mass of up to 1 kg. A robotic fire extinguishing complex, Uran-14, appeared to extinguish foci on the ground, in warehouses and arsenals.

After the military tests of these robotic complexes, they will be equipped with all formations and training centers of engineering troops. 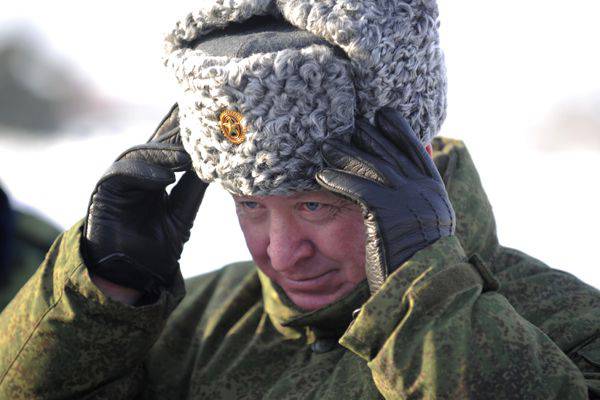 Lieutenant-General Yuri Stavitsky began his career as commander of an engineering positional platoon. Photo: RIA News
Will new robots be able to act not only on a hypothetical battlefield, but also in urban areas? Do such patterns exist?

Yuri Stavitsky: In the interests of the engineering troops, a whole range of other robotics samples are being developed. I will give only one example. The specifics of the tasks of demining terrain and objects in urban environments, the implementation of protective measures at sites of state importance during the conduct of particularly important events necessitated the creation of a mobile engineering demining complex "MIKR". Its main tasks are reconnaissance of the area, industrial and residential premises, objects and transport, detection and determination of the location of explosive objects. As well as carrying out works on the disposal and liquidation of detected objects and the implementation of technological operations.

The all-wheel drive van is used as a base vehicle, in which, among other things, is carried a robotic complex designed for engineering reconnaissance and destruction of explosive items.

Are robots ready to be completely replaced in mine clearance not only by humans, but also mine detection dogs?

Yuri Stavitsky: I do not think so. The fact is that the calculations of mine-searching dogs perform the most important tasks of searching for explosive objects, including improvised explosive devices that do not contain metal. Also in a number of other cases, our four-legged assistants remain indispensable, so I am convinced that they will remain in the ranks for a long time. 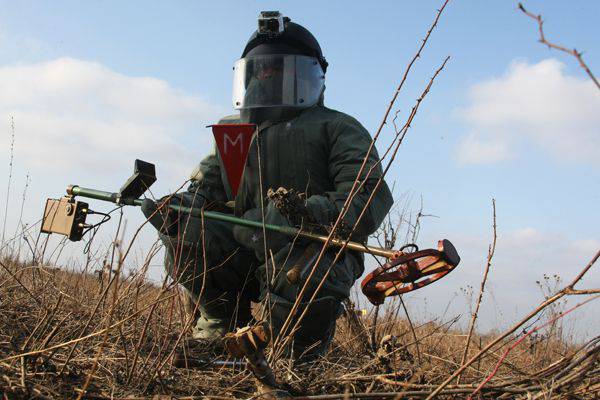 In the future, all work on mine clearance is planned to be transferred to special robots. Photo: RIA News
The engineering troops, however, are not only engaged in clearing other people's mines, but also set them up themselves. Has the work of miners become safer lately?

Yury Stavitsky: A new engineering remote mining system has been developed with a min feed range from 5 to 15 kilometers. It is used for remote installation on the ground of anti-tank, anti-personnel and mixed minefields in the course of engineering support of military operations of troops. Such a system makes it possible to increase the tactical and operational capabilities of the engineering units of the infantry brigades, as well as the mobility and flexibility of the combat use of the mine-blast barrier installation tools.

What new weapons and military equipment will the engineering troops receive in 2016?

Created automated engineering reconnaissance machine AIRM. Its main advantages are that the rate of engineering intelligence and the ability to detect any type of mines and explosive objects is doubled. The machine also transmits reconnaissance data to the control center in real time in digital format.

To protect the sapper from the explosion, various types of protective suits were developed, which are part of combined-arms demining kits. For convenience, the protection in them is differentiated.

A distinctive feature of the costumes is the presence in the design of the cooling system, which reduces sapper overheating and fatigue, active hearing protection and other useful innovations.

The existing diving equipment is being replaced by new models, the main advantages of which are weight reduction, reduction of the diver’s preparation time for descent, extension of the diving time and expansion of the range of work performed.

Of the promising new products, a portable multi-channel mine detector and new power plants have also been developed. A multifunctional engineering landing craft and a range of tugboats, a mobile engineering repair complex and a brigade observation point have been created.

In the sapper's arsenal, a multifunctional knife and a special shovel appeared. From clothes - seasonal camouflage suits.

There are many other promising designs. Some of them have already been planned for purchase as part of the State Defense Order for 2016-2018 years, others - as soon as the development and testing is completed.

Does the structure of the engineering troops change or is it already fully formed? Are new engineering parts or connections planned to emerge? Maybe with some special tasks.

Yuri Stavitsky: A reserve is being created for solving sudden problems. For this purpose, engineering and sapper and pontoon-bridge brigades were formed on strategic lines within the engineering troops of central subordination. They are enrolled in the reserve of the General Staff.

The engineering-sapper brigade is designed to carry out the tasks of engineering support of combat operations and liquidation of the consequences of emergency situations. For the first time in recent years, an engineering battalion of assault and defenses was included in the brigade. It is equipped with new personal protective equipment of the sapper - special assault suits.

Pontoon-bridge crew is designed to perform special tasks. We are talking about the equipment of high-capacity ferries - up to 120 tons on large water barriers - over 600 meters. It will also be necessary for suddenly arising tasks in peacetime, associated with the crossing of equipment and material resources, including in the course of eliminating the consequences of emergency situations.

To further enhance the capabilities of the engineering troops and the independence of the combined-arms (tank) armies and fleets, army engineer-engineer regiments and naval engineering regiments are being formed or already formed.

In the 2013-2015, five regiments were formed: three engineer-sappers as part of the 6, 49 and 58 combined armies of the Western and Southern military districts and two naval engineers in the Baltic and Black Sea fleets. 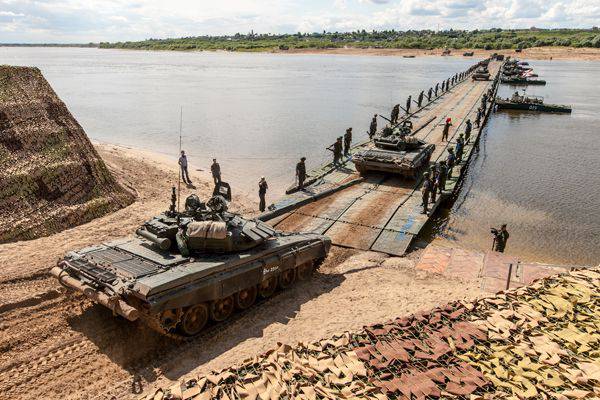 A pontoon-bridge crew can equip a crossing with a lifting capacity of up to 120 tons on water barriers. Photo: RIA News
Unique operations that military engineers can perform can now be seen at the Army international games. In front of the audience, they made pontoons, found and cleared training mines for the passage of tanks. What will surprise your experts viewers at these games this year?

Yuri Stavitsky: In the framework of the "International Army Games-2015" engineering forces organized and conducted two international competitions - "Open Water" and "Safe Route". In all competitions, teams demonstrated excellent skills in engineering engineering. By the way, the Russian military were stronger than their foreign counterparts.

This year the competition program will increase by one more competition - "Engineering Formula": the crews of engineering vehicles will need to overcome obstacles and limited passes for speed and time, and on the so-called "pitstop", as in "Formula 1", perform engineering task

Engineering troops are one of the oldest in the Armed Forces of the Russian Federation - January 21 will celebrate the 315 anniversary of their formation. History The engineering troops began in the era of the birth of the regular Russian army. 21 January 1701, Peter I signed a decree on the creation of an engineering school. And later, 25 May, - another decree on the formation of the first engineering units, which were originally represented by a mine company, engineering and pontoon teams.

In peacetime, engineering troops help in the aftermath of emergency situations. This equipment and the maintenance of crossings on water barriers, fire fighting, collapse of buildings in emergency condition.

Ctrl Enter
Noticed oshЫbku Highlight text and press. Ctrl + Enter
We are
Theory and practice of engineering operationsCreation of combat space: 21 century military engineering vehicles
9 comments
Information
Dear reader, to leave comments on the publication, you must to register.