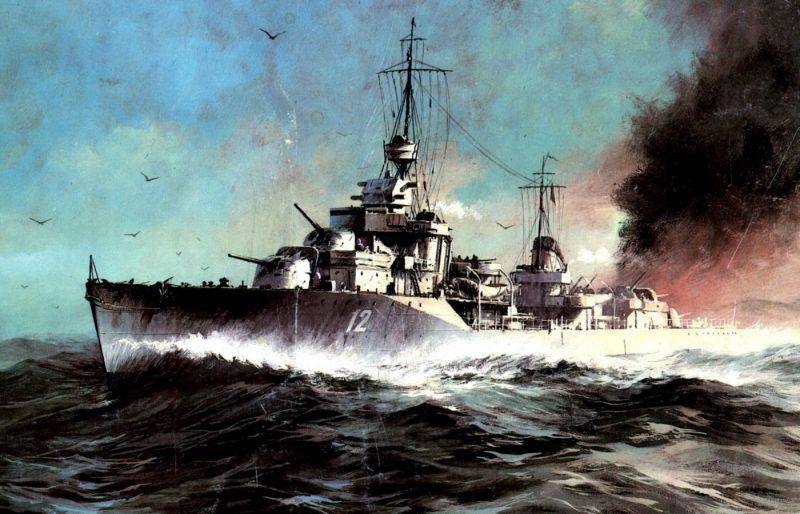 14 February 2016 marks the 120 anniversary of the birth of an outstanding shipbuilder engineer engineer Rear Admiral Vasily Grigorievich Vlasov. With his scientific works, he made a noticeable world contribution to the development of the ship's theory, including the improvement of its nautical qualities. Fundamental works belong to VG Vlasov and in the study of the problems of launching the ship into the water, published his works in the field of fluid mechanics and applied mathematics. However, in the wide circles of the Navy, he is best known as the author of the "practical method of straightening" a damaged ship, which has been the basis of the documentation on unsinkability of ships of our Navy that has been in use for more than 60 years.

Critically assessing the use of "tables of floodability" and "combat tables" A.N. Krylova, Vlasov in 1938 year developed, and in 1940 year published his own method of rectification, which he called "practical". This method, proposed by Vlasov, was very progressive. Earlier, being the largest specialist in launching ships (without his visa, not a single project for launching large ships was approved), he published a monograph in 1936 containing a theoretical basis for the phenomena that could occur during such a descent and suggested methods at the same time calculations. 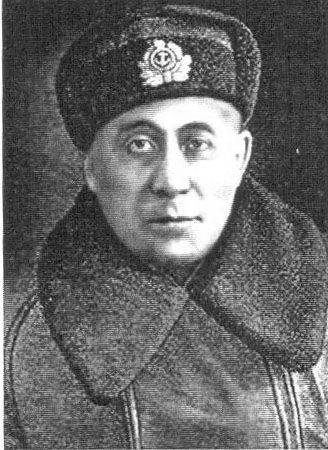 Born VG Vlasov in Tver in the family of a locomotive driver. After graduating from the Tver gymnasium in 1914, he decided to hold examinations at the same time to two higher educational institutions - St. Petersburg Institute of Railway Engineers and Kronstadt Marine Engineering School (MIU). Having endured them very successfully, Vasily eventually chose the MIU, where there were no class restrictions at that time, and a full state pension was provided. This was important after the loss of his father, who died suddenly in 1911. It should be emphasized that in the school of 39 people who were admitted to the exams that year, only 19 successfully passed them, and only 5 of the best were taken from them, including Vasily.

During his studies, he paid special attention to mathematics, theoretical mechanics and the theory of the ship. Fluent in French, as, incidentally, English and German, he studied mathematics Vlasov on the most advanced Posse course at that time, reading it in the original. According to the stories of Vasily Grigorievich, in their class the courses of structural mechanics and ship theory were conducted by Yu.A. Shimansky, but nevertheless he called his favorite teacher I.G. Bubnova. Studying the theory in depth, Vasily used his time at the school to familiarize himself with the practice of shipbuilding and ship repair at Baltic factories and docks.

In October, 1917 was transferred to MIU from Kronstadt to Petrograd, where in the summer of 1918, Vlasov was awarded the title of ship engineer. The certificate issued to him indicated that he could hold the position of full-time teacher in special educational institutions, manage factories and plants, draw up projects and construct all kinds of vessels and carry out special work associated with the specialty of a ship engineer. It also said that graduates of the Marine Engineering School enjoy the rights of graduates of higher educational institutions.

During the first years of independent work as a ship engineer, he served in the Petrograd and Kronstadt military ports, at naval Baltic factories, at the Astrakhan-Caspian flotilla, worked in the Sevastopol ship raising department. His knowledge of the theory of the ship was especially useful there, without which it was almost impossible to perform calculations on the lifting of sunken ships. Vlasov's successful activities quickly promoted him to the ranks of the most authoritative naval engineers of that time, and already at the end of 1921 he became assistant to the head of the emergency dock distance of the Main Naval Port of the Baltic Sea.

The rebuilding of the military fleet, which began in 1921, required an expansion of the training of command and engineering personnel for it, which resulted in the restoration of the naval engineering school that had been liquidated in the fall of 1918 (later, the Dzerzhinsky Military Pedagogical Institute). This, in turn, required the involvement of highly qualified teachers, and Vlasov in August 1922 year sent to the school. His pedagogical activity was initially connected with conducting practical classes in mathematics, theoretical mechanics, and material resistance, and then with the theory and design of a ship. Vlasov worked there for three years then: due to the lack of specialists involved in restoring warships, he was again transferred to the Main Military Port of the Baltic Sea to head the emergency docks distance, and since April 1926 he has served as head of the technical bureau of the Kronstadt ship repair plant.

In November 1928 of the year Vlasov, as an experienced ship engineer, whose name was already known in the navy, was appointed a member of the shipbuilding section of the Scientific and Technical Committee of the Directorate of the Naval Forces of the Red Army, whose chairman was Yu.A. Szymansky. In the same year, the first scientific work of Vlasov appeared in the bulletin of the Scientific and Technical Conference. And while in the process of working at a new duty station, he had to solve various issues related to the design of ships and submarines, ensuring their stability, unsinkability, smooth rolling, maneuverability and strength, yet the theory of the ship remained the closest to him. in college. In addition, reading the relevant course in the VVMIU expanded his horizons and expanded knowledge in this area. As a result, Vlasov became the largest specialist in the Navy of that time, engaged in the theory of the ship, and therefore the solution of all issues in this area was invariably entrusted to him.

In connection with the increased requirements for the training of ship engineers, which was caused by the development of military shipbuilding, in 1929, Vlasov was again sent to VVMIU, first as deputy head of the shipbuilding department, instructing him also to read the ship’s theory course, and then, as Chief, this department. Paying much attention to teaching at the school, in 1931, he becomes simultaneously an associate professor at the Leningrad Mining Institute, where he teaches theoretical mechanics, and an associate professor at the ship theory department at the Leningrad Shipbuilding Institute (he later headed this department at 1930 —1933), and 1937-th to 1934 year was also head of the ship theory department at the Dzerzhinsky All-Union Military Research Institute. Here in 1938, he was awarded the title of professor. And from July 1935 of the year to June 1938 of the year, Vasily Grigorievich simultaneously heads the departments of the theory of the ship of the VVMIU Dzerzhinsky and VMA named A.N. Krylov, and he gives lectures at the academy, which Krylov read there before him. 1940 June 8 of the year, by decree of the Council of People's Commissars of the USSR, he was among the first to be given the newly introduced military rank of Engineer Counter-Admiral.

At the end of the thirties, Vlasov was involved in solving numerous technical issues arising in the design and construction of new ships, but since the management of the departments of two schools at once took almost all of his time, he could not pay enough attention to these issues. As a result, in June 1940, he was appointed deputy head of the Navy NTC, relieving him of his work in the departments. During this period, continuing intensive scientific work, Vlasov is directly involved in solving the most important practical issues facing the fleet and the shipbuilding industry. In particular, when considering the problem of ensuring the stability of destroyers, projects 7 and 7. His opinion played a decisive role. Then Vasily Grigorievich achieved the adoption of rational, science-based measures to increase the stability of ships. Due to this, none of the destroyers of these projects have not overturned, not only during the whole period of operation, but even in the case of heavy damages during the Great Patriotic War.

In the 1943 year, when the turning point in the war made it possible to pay more attention to training for the fleet, Vlasov was returned to teaching activities, appointing the ship theory head as head of the shipbuilding department, and then FEI Dzerzhinsky. Continuing to actually head the department, he served in this position until October 1944, after which until the end of his days he served as a consultant in the governing bodies of the Navy, at the same time heading the ship theory department at the Leningrad Shipbuilding Institute. At the same time, Vlasov remained an active participant in solving many of the most important problems of military shipbuilding. 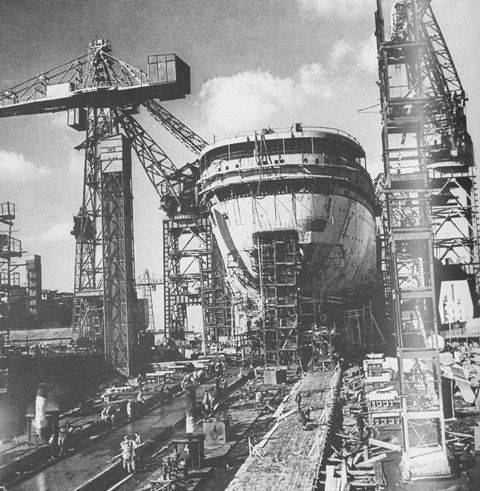 From more than a 40-year-old service in the navy, Vasily Grigorievich 15 spent years directly teaching at the VVMIU and VMA, as well as part-time at the Shipbuilding and Mining Institutes of Leningrad. But in subsequent years, he did not stop work for high school, as evidenced by the textbook "Static ship" and the textbook "Static submarine", written by him, when he did not teach in educational institutions.

It must be said that the works of VG Vlasov are widely known not only in our country, but also abroad. As noted by his student and historian Yu.P. Potapov, the works of Vasily Grigorievich can be found in the libraries of the German University, the Gdansk Polytechnic Institute, in the technical library of the shipbuilding plant in Pula (Croatia), as well as in libraries of other countries. According to him, the Library of Congress, the United States has a complete collection of works of Vlasov.

In February, 1956 was widely and solemnly celebrated its 60 anniversary. The jubilee meeting of the Academic Council of the Military Medical Academy made a decision on the assignment of V.G. Vlasov holds a doctorate in technical sciences, and the USSR Minister of Defense, in connection with his jubilee and for his services to the Navy, authorized the publication of a collection of his works.

13 July 1959 in the prime of his creative power, continuing to the last day of his scientific activities, V.G. Vlasov died suddenly of a stroke. They buried him at the Bolsheokhtinsky cemetery. In commemoration of Vasily Grigorievich and in commemoration of his services to the Fatherland and the Navy, on the day of his 70 anniversary, a memorial plaque of VG Vlasov was solemnly opened in the VVMIOL named after F. Dzerzhinsky. One of the minesweepers was given the name "Rear Admiral Vlasov", and a separate exposition was created at the Central Naval Museum dedicated to his life and work.