In the fight you will find your right 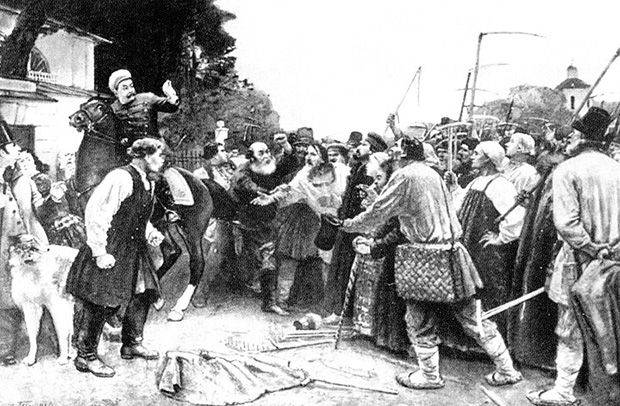 The era of Alexander II - the time of industrial recovery. The abolition of serfdom led to the rapid growth of the wage labor market: many “liberated” simply did not have land for cultivation, while others could not feed the family with the help of a plot for which they still owed the landlord. From a semi-patriarchal feudal country, it quickly turned into a capitalist country, where production was based on the system of wage labor. In the course of the industrial revolution, a new class of permanent workers was formed, concentrated in the largest industrial centers of the country. If earlier the workers were in many respects the same peasants who left the city at the time of the end of the seasonal agricultural work, now the core of the working class was people who were deprived of the means of production and had broken the connection with the land. If in the 1860 year in Russia there were about 0,72 million workers of large capitalist enterprises, by the beginning of the XX century their number was close to 3 million.

Such a rapid increase in the number of workers raised the question of their rights. This problem was very acute. On the eve of the 1861 reform, a third of the Russian workers were serfs, who had no right to leave the factories, mines and mines to which they were assigned. After the abolition of serfdom, workers began to be hired by enterprises on the terms of free employment. However, the word "free" in this case is deceptive. While settling for work “from Easter to Easter,” the man gave his passport to the factory office, after which he was actually deprived of his liberty: entrepreneurs could delay his salary, pay it not fully, make him work all day, punish him for offenses with a rod and at any time fire him for cheeky behavior. The “humane” 12-hour working day acted at the majority of factories in the Moscow province, while at the enterprises of other provinces it most often lasted from 12 to 15 hours. 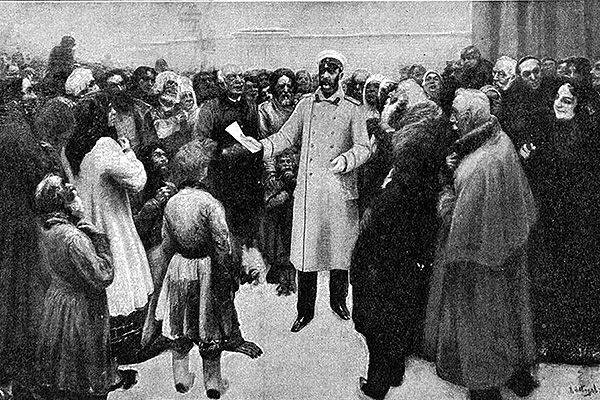 Alexander II liberates serfs. Illustration in the book "The Kings of Russia", a picture of Lebedev
There was no regularity in the payment of salaries: most of the owners paid it only twice a year - at Easter and Christmas. As a result, workers were forced to purchase products on credit, and then the manufacturer again "came to the rescue": it was only possible to be credited in the factory shop, where high prices for products were set. As later researchers have shown, many business owners made the main profit from the work of shops, and not from production. No laws limit the size of fines levied by the owners at their discretion. This made the work of the workers almost free: they enriched the employer and, after paying the debt to the shops, they remained with miserable pennies. Often, the contract concluded between the employee and the employer was oral, and even after the expiration of a one-year period the person could not substantiate the complaint against the former boss. This order, somewhat reminiscent of the position of the serfs until the abolition of St. George's Day, was maintained in most enterprises until the 1880-s. Let's not forget that child labor was widely used: about two thirds of workers began to work before the age of 14. Child labor was accompanied by severe injuries, and the epidemics, which were frequent guests in the barracks where the workers lived, annually killed hundreds of small workers.

Revolution under the cloth

The working question was repeatedly raised by democratically-minded publicists even before the abolition of serfdom, and from the end of 1850's was widely discussed in various government commissions. One of the first documents that laid the foundations of labor legislation in Russia was the “Draft Rules for Factories and Plants in St. Petersburg and the County”, which prohibited children from working up to 12 age and limited employer's rights to adolescents (they could not work more than 10 hours and at night), some sanitary standards were introduced in factories and residential areas and for the first time in stories determined the responsibility of entrepreneurs for accidents with workers. A specially appointed factory inspection was supposed to check the rules. The government intended to extend these rules to the whole country, but their discussion by officials and manufacturers revealed sharp contradictions: the liberal authors of the draft law even provided workers with the right to strike, which the manufacturers were afraid of like fire. That is why the first projects pleased the cloth.

The workers themselves urged on the further legislative activity of the officials. The two largest strikes — at the St. Petersburg Neva Cotton Mills in 1870 and at the Krengolm Manufactory in Narva in 1872 (the last 7 thousand people took part) frightened both the authorities and the manufacturers. The new commission, chaired by Adjutant General Nikolai Ignatiev, insisted on limiting the arbitrariness of employers, but its most humane ideas, such as prohibiting child labor, were even criticized by representatives of the liberal public, who claimed that this decision would lead to hunger and the impoverishment of the children of workers themselves . Like the previous one, the commission was unable to find a compromise solution that could be understood by both the manufacturers and the workers. The same failure awaited the next commission, which worked until 1875 of the year. By the end of the second post-reform decade, Russia had approached without labor legislation and with bad baggage of discontent of the rapidly growing working class.

In 1880, this discontent rapidly increased due to the economic crisis: the costs of the 1877 – 1879 Russian-Turkish war and several failures in a row caused the agrarian first and then the industrial crisis. To the old problems of the working people was added a new one - unemployment: tens of thousands of proletarians were thrown into the streets, the rest were faced with a sharp decline in wages. Under these conditions, the government finally began introducing long-established provisions: the law of 1 June 1882 set a ban on children’s work to 12 years, limited the work time for teenagers 12 – 15 8 years to hours (with a mandatory interruption and a total ban on work during the night hours). The manufacturers were forbidden to use child labor in hazardous industries and ordered to provide the opportunity to study in a single-school public school to illiterate children. The law of 3 June 1885 of the year forbade night work of adolescents to 17 years and women in a number of industries. The control over the implementation of the laws was to be carried out by the factory inspection that was finally established. Which, by the way, soon discovered that even a few years after the adoption of laws, their provisions were largely ignored by industrialists, and sometimes demonstratively.

The culmination of grumbling in the work environment was the Morozov strike 1885 of the year. In just two years, starting with the first crisis 1882, manufacturers have consistently reduced wages five times, while constantly introducing new fines, sometimes “eating up” half of their earnings. The rise of the strike activity following the suppression of the Morozov strike frightened the government, and it hurried in 1886 to adopt a new factory law, where the whip was next to the gingerbread. 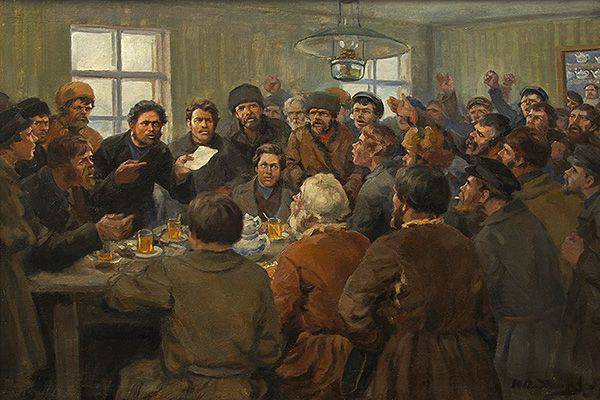 Morozovskie weavers discuss the requirements on the eve of the strike. Photo: State Museum of Political History of Russia
On the one hand, the “Rules on the mutual relations of manufacturers and workers” introduced long-conceived progressive rights of workers. They received payment books, where the terms of the contract with the employer were fixed. The procedure for hiring and firing was regulated: entrepreneurs were obliged to warn workers of dismissal two weeks in advance; wages should have been paid at least once or twice a month. The worker could demand termination of the contract of employment if the employer delayed the salary or if his representatives caused verbal insults and beatings to the person. An important improvement was the restriction of arbitrariness in determining the amount and procedure for levying fines: the total amount of fines could not exceed one third of the salary, and the money collected should be used for the needs of other workers.

These progressive measures were compensated by other, extremely tough, aimed at suppressing strikes. For incitement to worker strikes, they could have been imprisoned for up to 8 months, for participation - up to 4 months. Comparable penalties were provided for damage to factory property, threats to the administration and owners of the enterprise.

The last decade of the XIX century brought with it new opportunities and difficulties: the country's recovery from the crisis and the unprecedented rise of industry put the challenging task for Finance Minister Sergei Witte to smooth out the contradictions between industrialists and workers, to achieve stable economic development while simultaneously suppressing the spread of socialist ideas among the proletariat. The new takeoff of the strike movement, which began in the middle of the 1890, took place on a scale that ten years ago would have seemed terrifying: for example, 1896 thousands of people joined the citywide strike of the St. Petersburg workers in May 30 in just a few days. Among the main requirements put forward by the workers were a reduction in working hours from 12 – 14 hours to 10,5 hours, a ban on salary delays, an increase in tariffs for various jobs, etc. Witte used the current situation to put pressure on the government and industrialists, who were desperately opposed to the drafting of a law on the regulation of the working day. At the end of the year, a commission was set up under the Ministry of Finance to devise a law. Initially, she proposed setting the maximum working day in 11 hours, shortened to 9 hours for those workers who were used in night work. However, industrialists led by Savva Morozov defended the 12-hour day for everyone, no matter what time of day they worked.

As a result, the law “On the Duration and Distribution of Working Time in Factory Industry Institutions”, published on 2 June 1897, was of a compromise nature: the working day could not last longer than 11,5 hours, and on the holidays and Saturdays - over 10 hours. The issue of night work in the law was almost not addressed: they were not prohibited, but only limited to 10 hours. In addition, the document applied only to permanent industrial workers, of which there were no more than 20% of the total number.

Government policy has not taken the edge off the issue. To compensate for the reduction in working hours, industrialists came up with a number of tricks: for example, they increased the rate of output per day, and also used the right to work overtime, for which a special contract was drawn up. By the end of the 19th century, the position of the Russian proletarians was much harder than that of their European and American counterparts: while in England, the USA, Denmark and Norway the working day lasted 9 – 10 hours, and in France, Germany and Sweden - 10 hours, in Russia on average, it was only slightly shorter than the legal maximum of 11,5 hours. Workers' wages (excluding fines and debts in factory shops) were in Russia in 2 times lower than in England, and in 4 times lower than in the USA. In the next century, workers' discontent will promote the widespread dissemination of revolutionary ideas among them and lead first to the 1905 revolution of the year, which improved their situation for a short time, and then to the 1917 revolution of the year that destroyed the state that did not find a solution to the working question.

Ctrl Enter
Noticed oshЫbku Highlight text and press. Ctrl + Enter
We are
Taking the fortressThe development of the military-industrial complex of the Russian Empire in the years of WWI
25 comments
Information
Dear reader, to leave comments on the publication, you must to register.