January 22 2016
22
During the fifties of the last century, the Springfield Arsenal worked on several projects of new hand grenade launchers. As a result, in the 1961, the M79 product was adopted by the American army. Adoption of a new weapons Armed Forces led to a slowdown in work on alternative projects or to their full stop. The most interesting development that could compete with M79 was the project under the designation T148E1. This grenade launcher was supposed to differ from the M79 in the possibility of making several shots in a row, but in the end it did not justify the hopes placed on it.


A manual grenade launcher M79 caliber 40 mm received the highest marks of the military. It was easy to manufacture and operate, but it had high enough characteristics and could significantly increase the firepower of the infantry unit. However, at the design stage, it became clear that the proposed design had a characteristic drawback: the grenade launcher should be reloaded after each shot, which reduced the combat rate of fire. To solve this problem, it was necessary to create some kind of ammunition system capable of producing several shots without reloading.

Work on creating a multiply charged grenade launcher for 40x46 mm ammunition started in the mid-fifties, after the design of the XM79 was completed. In the early stages, before the advent of the T148E1 project, various options for ammunition systems were proposed to increase the rate of fire and the effectiveness of fire. For example, the variant with a cylindrical magazine located under the barrel was considered. Such a scheme could solve the task, but the finished weapon turned out too large, heavy and inconvenient. In addition, the recharge of such a grenade got too long, and in the end was not much different from the XM79. A different solution was required. 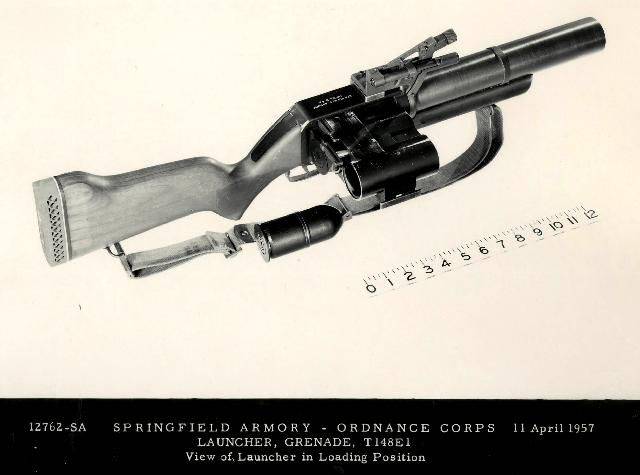 According to the analysis of various proposals, the most convenient and simple was chosen. It was decided to base the design of the finished XM79 grenade launcher into which the ammunition system based on the magazine cassettes should be added. In addition, it was proposed to appropriately modify the trigger mechanism and abandon the mechanism of the type "change". This architecture provided a solution to the tasks, and did not lead to a serious increase in the weight of the weapon. The cassette-powered grenade launcher project was designated T148E1.

A promising multiply charged grenade launcher received a “legacy” of the base XM79 wooden box and the main part of the barrel. On the butt remained a thick rubber butt plate to absorb recoil. In front of the box was fastened 40-mm rifled barrel, which lost the chamber. In place of the latter was located a new system of supply of ammunition. In front of the barrel there is a clamp with fastenings for a frame sight.

In place of the former chamber there was a full-fledged receiver with large windows in the sides. It was proposed to place a store with grenades in it. According to reports, the store was asked to insert the left, and during the shooting, he had to move to the right. In front of the receiver, on its upper surface, there was a lever for controlling the ammunition feeding and loading mechanisms. When it was retracted and returned to its original position, the cassette shifted one cell, leading the chamber with a new ammunition to the barrel. The shot was made by pressing the trigger of a double-action trigger. In this case, the drummer had to first be relegated to the rear position, after which he fell off the sear, hit the grenades on the primer and initiated the ignition of the propellant charge. As part of the trigger provided a fuse in the on position to block the trigger. 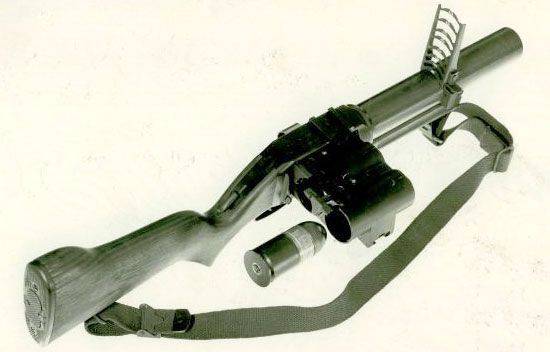 Grenade launcher with a sight from XM79. Photo Weaponland.ru

The main element of the new loading system was to be a special cassette. It was made in the form of a milled part with three chambers and several planks on the outer surface. For proper orientation when loading, the upper rear part of such a store had a smooth surface, and in the center of the bottom two protrusions-rails were included, which entered the grooves of the receiver. In addition, there were spring-loaded stops between the rails, which ensured the correct operation of weapon mechanisms.

In preparation for the shooting, the grenade launcher had to place three grenades in the chambers of the store. Then it was placed in the receiving window of the receiver and the mechanisms of the weapon were activated. With the help of the trigger shot was made. For reloading it was necessary to lift and lower the lever into place, which led to the displacement of the cassette and leading to the trunk of the next chamber. Having shot one store, the grenade launcher could have inserted a new one into the grenade launcher. In the back of the store, two triangular spring-loaded sleeve extraction elements were provided. With their help, spent cartridges were thrown out of the cassette after it exited the receiver.

The finished grenade launcher had a length of 767 mm, was equipped with an 279-mm barrel and weighed (without a cassette) 3,05 kg. Provided the initial speed of the grenade at the level of 75 m / s. The sight was marked for firing up to 315 yards (around 280 m). 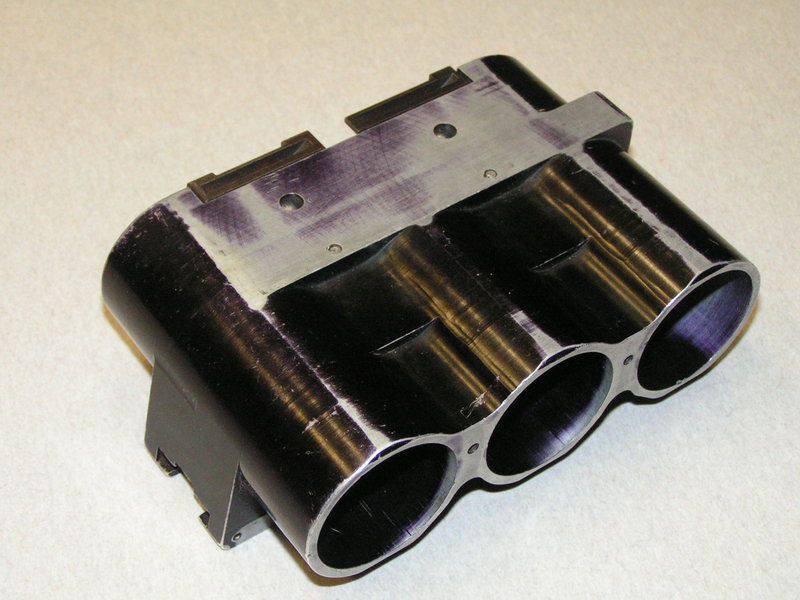 Not later than 1957 of the year, at least one prototype of a promising weapon was made, which was soon sent for testing. The inspections were carried out both by specialists from the Springfield Arsenal and by US Army personnel. All of them noted that the proposed T148E1 grenade launcher has a significant advantage over the XM79 associated with the intensity of the fire. Due to the lack of the need for a permanent “turning point” of the weapon and a relatively long reloading time, the new T148E1 could quickly make three shots, and replacing the store was a matter of a few seconds and allowed to continue shooting quickly.

The power of ammunition, for obvious reasons, remained the same. The new grenade launcher was supposed to use existing grenades, which is why the difference in the combat characteristics of the XM79 and T148E1 was associated only with the technical features of these samples.

From the point of view of firing characteristics, a grenade launcher with cluster ammunition had noticeable advantages over a single-shot one. However, these advantages were associated with characteristic disadvantages. In the receiver of the grenade launcher there were two large windows for the cassette, which in practice were quickly clogged with dirt. Without a good cleaning, the weapon could not continue firing with sufficient efficiency, and besides, delays were not excluded. Another disadvantage was balancing weapons. Sequential shooting of three grenades led to noticeable changes in the center of gravity and forced the shooter to correct the tip after each shot. 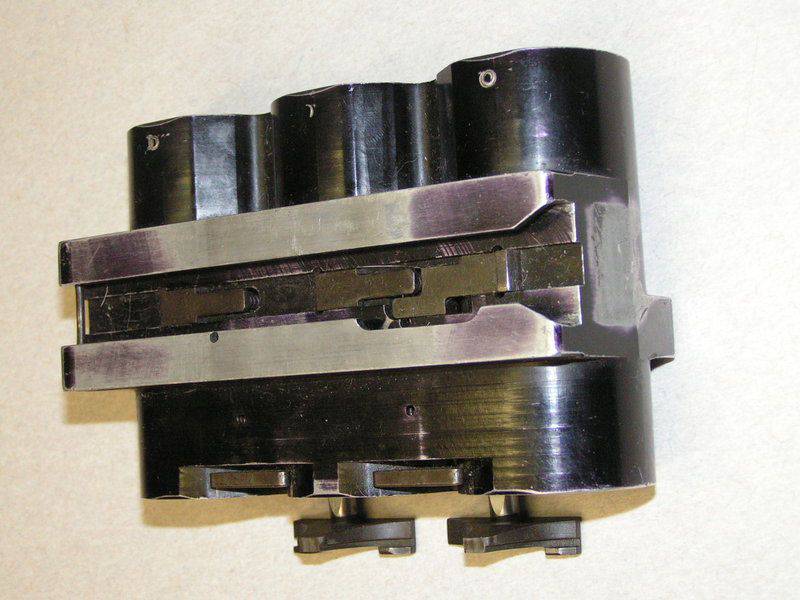 The last and probably the main disadvantage of the proposed project was in the unfinished stores. These devices were proposed to be made of steel, which ensured sufficient strength and made it possible to withstand the pressure of gases when fired, but it adversely affected the overall weight of the weapon and its ammunition load. Calculations showed that, with the same weight, the XM79 grenade ammunition in the pouches would be noticeably larger than the T148E1 with its cassettes. Combined with other problems, this flaw could put an end to the project.

According to the test results of several samples, it was decided to adopt a simple but reliable single-shot XM79 grenade launcher. This did not lead to the termination of work on the project T148E1. The development of these weapons continued over the next few years. Due to improvements in various new parts, it was possible to improve some characteristics, as well as improve the reliability of the weapon. In the course of the new work, the architecture of the weapon has not changed, but some details were subject to some modifications, with which the identified problems were associated.

According to some information, in the mid-sixties, the Springfield arsenal collected a number of promising rocket launchers and was even able to achieve their troop operation. This weapon was transferred to one of the units that fought in Vietnam. There, again, the pros and cons of the design were identified, which made it possible to begin a new phase of improvements.

The next work on the improvement of the project did not yield any noticeable results. Despite the change in the design of the store, the required ammunition was still too heavy, and the large windows in the receiver continued to collect dirt. The complete elimination of these shortcomings was fundamentally impossible.

Work on the project T148E1 continued until the second half of the sixties. Several attempts to improve this grenade launcher have not been crowned with particular success, and later on he had new competitors who were distinguished by even higher performance. In the very near future, the creation of multiply-charged revolving hand-held grenade launchers began. Further development of the T148E1 product did not make sense. The project has been closed.

The T148E1 hand-held grenade launcher project is an interesting example of how an attempt to improve a simple, but convenient and efficient design did not produce special results. The attempt to equip the base XM79 with an ammunition system led to an increase in size and weight, and also contributed to the emergence of some other operational drawbacks. As a result, M79 grenade launchers are still in service with the United States and many other countries, and the T148E1 has not left the stage of various tests.